The Nubia Red Magic 3 wins in battery capacity, but loses in the camera department with just one rear camera. 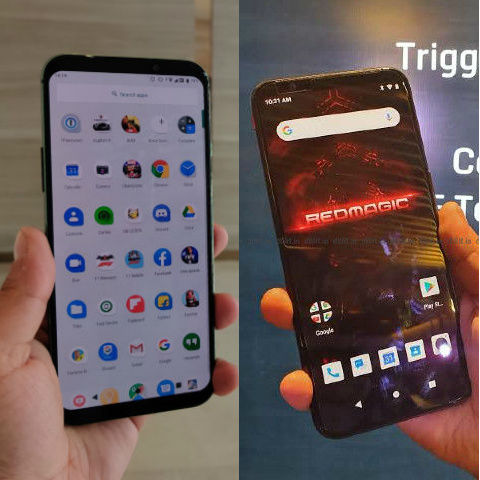 With the rise of mobile gaming, India is now becoming the new war zone for OEMs battling it out to grab the players and get them interested in dedicated gaming smartphones. Xiaomi-backed Black Shark 2(₹ 31999 at flipkart) recently launched in the country, and now, so has Nubia's Red Magic 3. The Black Shark 2 starts at a price of Rs 39,999 and is already available for purchase via Flipkart. Nubia Red Magic 3, on the other hand, costs a minimum of Rs 35,999 and will be available starting June 27 on Flipkart. As always, Digit is here to help you quickly go through the specs of these phones and see how the two new Chinese gaming smartphones stack up against each other on paper. 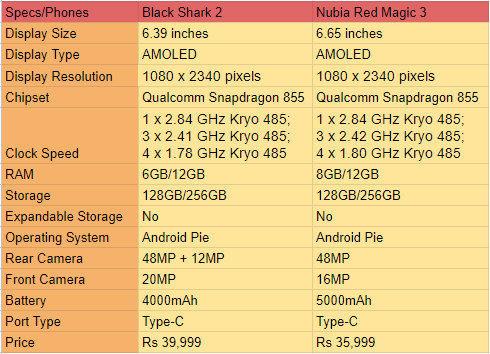 The Black Shark 2 features a 6.39-inch AMOLED display with 1080 x 2340 pixel resolution and 19.5:9 aspect ratio. The display has 60Hz refresh rate and the phone is equipped with an in-display fingerprint sensor. In comparison, the Nubia Red Magic 3 comes equipped with a 6.65-inch FHD+ HDR AMOLED display with a 90Hz refresh rate. The phone’s display sports a 19.5:9 aspect ratio and comes with HDR support. There is a hexagon-shaped rear-mounted fingerprint sensor.

Both the phones are powered by the latest Qualcomm Snapdragon 855 mobile platform, and feature different cooling techniques under the hood. The Black Shark 2 features Liquid Cooling 3, which is claimed to be the world’s first “direct touch multilayer liquid cooling system”. It is touted to lower the CPU’s temperature by up to 14-degrees during intense gaming sessions. The Red Magic 3 is also equipped with liquid cooling tech as well as an active fan cooling system that is said to consume really low power (about one percent) when running continuously for an hour. The fan’s speed is also adjustable and is touted to reach a max speed of 14000 rpm.

The Black Shark 2 sports a 4,000 mAh battery, which comes with 27W fast charging support. It also has stereo front-facing speakers with DTS:X sound support and is said to feature 3D sound technology as well. It also gets additional features like a “Ludicrous Mode” that is said to enable one to play games by utilising 100 percent of the CPU.

Further, its display sports a pressure-sensitive system that enables gamers to map the buttons located on the flanking corners of the screen. When one presses down on these buttons or the part of the screen harder than usual, they can trigger these actions. The company claims that the phone’s display has been optimised for gaming and is capable of delivering reduced screen flicker at low brightness, improved colour accuracy and low touch latency of 43.5ms.

The Nubia Red Magic 3 is backed by a 5000mAh battery that supports 27W fast charging. Further, it comes equipped with a software dashboard called “Red Magic Game Space 2.0”, which enables shortcuts to quick-launch games and tweaks the fan speed. It is also equipped with two touch-enabled shoulder trigger buttons. These can be customised and mapped as per user's requirements.