Nokia 2 may be powered by a 4000mAh battery, run on Android Nougat 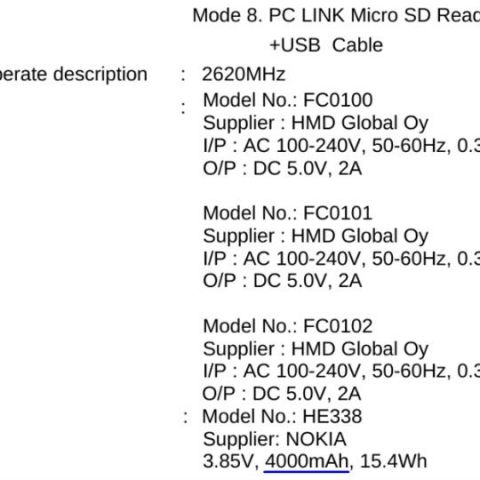 A frequent leakster, Roland Quandt has tweeted that going by the recently leaked FCC docs for Nokia 2, the smartphone may be powered by a 4000mAh battery. In that case, the Nokia 2 will be sporting the largest battery on any Nokia Android device made by HMD till date. Many leaks and rumours about the Nokia 2 suggest that it is probably aimed at the entry-level segment. The smartphone was recently spotted on FCC’s website and some images of the device were also leaked.

The Nokia 2 is rumoured to sport a 5-Inch HD display and could be powered by a 1.27GHz Quad-core Qualcomm processor. It is not clear yet if the smartphone will be powered by a Qualcomm Snapdragon 210 or 212 SoC. The reports also suggested that the phone may have just 1GB of RAM and could run on Android 7.1.1 Nougat. Being an entry level offering, Nokia 2 is expected to be priced lower than the Nokia 3 which costs Rs 9,499.

The Nokia 3 was launched back in June 2017, and sports a  5-inch HD IPS LCD display. It is powered by  a 1.4 GHz Quad-core Mediatek processor and sports 2GB RAM coupled with 16GB of internal storage, which can be expanded further up to 256GB via a microSD card.

The Nokia 3 sports an 8MP rear camera with Auto Focus, Geo-tagging, Touch Focus, Digital Zoom, Video Recording and an 8MP front facing camera. The Nokia 3 runs on nearly stock Android 7.0 Nougat and is backed by a 2630 mAh battery. The Nokia 2 is expected to be a dual-SIM smartphone and in terms of connectivity it is likely to include GPS, Hotspot, NFC,Wi-Fi and Bluetooth.