The smartphone had a customised display and camera. 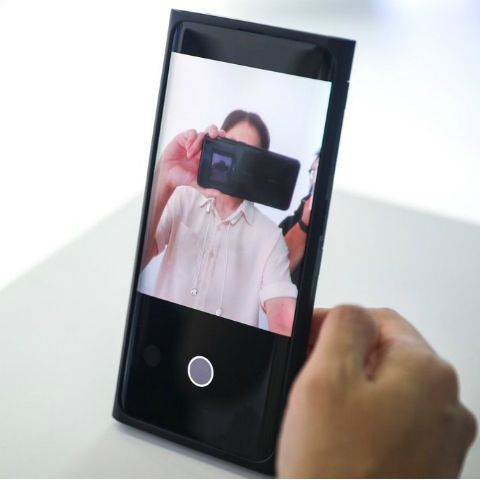 So the speculation turned out to be true and Oppo has made a breakthrough by premiering the first ever phone with an under-display camera. At the ongoing MWC Shanghai, the Chinese tech company pulled the covers off of a phone that neither has a notch nor a pop-up camera mechanism for front shooters. In a press note on its website, Oppo said that it has been “continually pushing the boundaries for bezel-less phone designs” (Oppo Find X) and this is the latest iteration in the race to create a perfect solution for a bezel-less, notch-less design. The company has been teasing this technology since the start of this month.

On June 3, Oppo India tweeted a short video. In the video, the company showcased the under-screen camera as a functional feature. Oppo says that users will see a short animation highlighting the position of the front-facing camera during selfie mode that will help them locate the camera. “Otherwise, it's invisible while watching videos, playing games, reading emails, making video calls with friends and family,” the Chinese company claimed.

But how did Oppo make the technology work? The company incorporated a customised display. The part of the screen, under which the camera module is fitted, is made of a highly-transparent material with redesigned pixel structure to ensure that optimal amount of light enters through it. The camera used in the tech is also customised with a large aperture, a big sensor and pixel size to dodge light refraction (bending of light after it enters from one to another). Since the camera has a thick material above it, it was expected that the photos would come out blurry.

The algorithms behind our USC technology showcased at #MWC19 include haze removal, HDR and white balance resulting in a bezel-less phone, yet with a selfie camera that rivals current smartphones in the market today. #MoreThanTheSeen pic.twitter.com/yTpWgIMLmA

To combat this problem, Oppo introduced three algorithms to enhance the camera performance. The first one is the White Balance in which the company made targeted adjustments and calibrated the colour against any light sources that might obstruct the image. The second one is the HDR algorithm that helps in reducing overexposed highlights and increases brightness in case of shadows or underexposed parts of an image. Finally, the Haze Removal algorithm increases the sharpness of the image.

Oppo says that it will deliver the “futuristic, notchless, unibody and highly-recognizable smartphone in the near future,” however, it did not delve out any information about the rest of the specs of the phone.