Huawei’s “NEO-AL00” smartphone has been spotted on TENNA and is listed with 512GB internal storage.

Huawei could be working on a new smartphone with 6GB RAM and 512GB internal storage. PhoneRadar first spotted the company’s latest device on TENNA with the codename “NEO-AL00” and it is could be the first mobile with 512GB of onboard storage. However, as it has just been spotted on TENNA, it’s not confirmed that the mobile phone will be launched anytime soon. 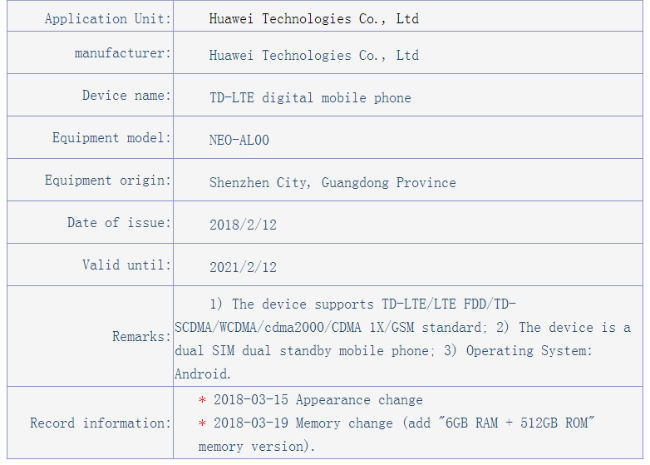 As of now, 256GB is the highest onboard capacity smartphones come with and back in December 2017, Samsung announced that it will commence mass production of the first 512GB UFS storage for devices and it should be noted that the company is currently the largest flash storage supplier for smartphones in the market. It seems unlikely that Samsung will let another company launch with its new storage solution first, and maybe we could see 512GB storage option on the Galaxy Note 9 but we are just speculating here.

Coming back to the NEO-AL00 smartphone, there is not much information to go by. However, rumours suggest that Huawei is developing a concept device under its Mate series called the Huawei Mate X and it might be the same device. The trademark for “MateX” was also acquired under the smartphone category by the company in Europe Last month.

Currently, Huawei is working on the launch of its P20 series smartphones on March 27 in Paris, France. The P20 and P20 Pro mobile phones will be unveiled at the event. The P20 Pro is rumoured to come with a triple rear camera setup which could be equipped with a 40MP RGB, 20MP monochrome and an 8MP telephoto sensor. Prices of the device have also been leaked ahead of the launch and the P20 will reportedly be priced at EUR 679 (Rs 54,400 approx), whereas the Huawei P20 Pro could cost EUR 899 (Rs 72,200 approx).