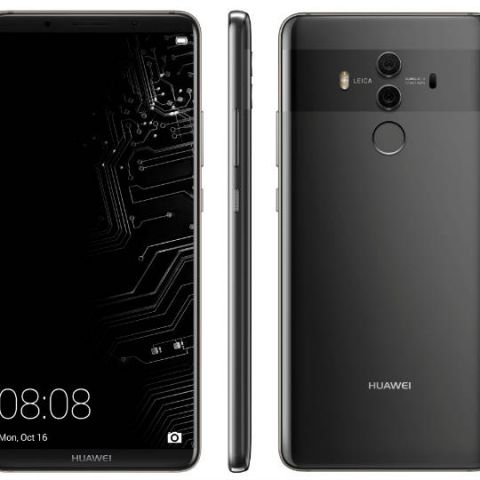 Huawei Mate 10 Pro codenamed Blanc has once again leaked in the form of renders. Ahead of its launch next week, Evan Blass has tweeted final renders of the device confirming its bezel-less design and updated dual camera setup. The smartphone is expected to be announced alongside the regular Mate 10 and Mate 10 Lite an at event in Munich on October 16.

As evident from the renders, the Huawei Mate 10 Pro is following in the footsteps of other smartphone makers to adopt the new bezel-less design language. The smartphone will sport thinner top and bottom bezels, allowing for a larger display in a smaller form factor. The smartphone will be Huawei's competitor to the Samsung Galaxy Note 8, LG V30 and Apple iPhone X.

Blass says that the Huawei Mate 10 Pro will feature a 5.99-inch IPS LCD display with a Quad HD+ resolution of 2880 x 1440 pixels. The display translates to taller 18:9 aspect ratio and will have a higher screen-to-body ratio than any of its previous flagship smartphones. The smartphone will be powered by Huawei's own Kirin 970 chipset, which also includes a dedicated Neural Processing Unit for offloading AI tasks from the main chipset.

The Mate 10 Pro will have 6GB RAM and options for either 64GB or 128GB internal storage. Apart from the design, the Mate 10 Pro will also see improvements in the camera department. The smartphone will feature a dual camera system with one 12MP sensor and another 20MP sensor paired with f/1.6 aperture lens. The new Leica-branded imaging system will support optical image stabilisation and match the wider aperture found on LG V30. The Mate 10 Pro will include an 8MP selfie camera.

Other features include IP68 water and dust resistance and support for LTE Cat 16 Modem. The smartphone is expected to run Android 8.0 Oreo with EMUI 6.0 skin and pack a 4000mAh battery. It is expected to start shipping sometime in December. Huawei has already defeated Apple to become the second largest smartphone maker globally despite its not so significant presence outside its home market. With the Apple iPhone X and Google's Pixel 2 becoming available next month, Huawei will have tough competition ahead and will hinge on competitive pricing to stay ahead of its peers.