The Honor 10 looks startlingly different thanks to the dual-tone glass finish that changes colour based on how you look at it. The phone is going on sale tonight on Flipkart for Rs 32,999. 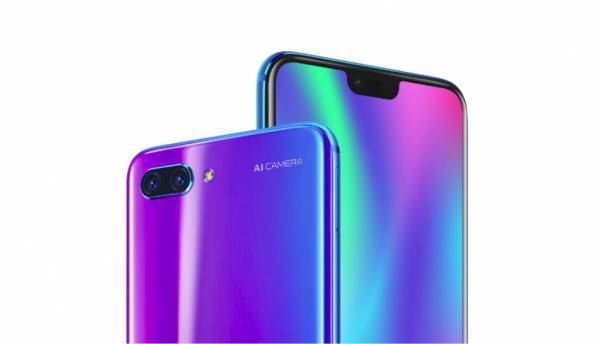 The Honor 10 is out for the world. Honor launched its flagship phone for 2018 globally at an event in London, after announcing it in China last month. The main highlight of the phone is the AI-assisted dual camera at the back which uses machine learning algorithms to enhance the photos. But more than that, the Honor 10 is one of the first phone to feature an under-glass ultrasonic fingerprint sensor, after the Xiaomi Mi 5s. The phone will be available in India starting Rs 32,999 exclusively on Flipkart. We played around with the phone for a couple of days. To know what we though about it, read our first impressions.

The Honor 10’s design is strikingly unique. It takes cues from the recently launched Huawei P20 Pro and the P20 Lite and brings a two-tone gradient finish to the glass body. The glass panel at the back changes colour depending on what angle the light reflects. Although there’s the more attractive twilight purple colour variant, only the Phantom Blue and the Midnight Black colour options will be sold in India for now.

Much like other smartphones launched this year, the Honor 10 also sports a notched display. It’s 5.84-inch LCD panel is interrupted by a cutout in the middle which allows for more screen real estate without increasing the size of the body. Because of the notch, the aspect ratio of the display is now 19:9 with a full HD+ resolution of 2280 x 1080 pixels. The notch houses the front camera and the earpiece apart from the proximity sensor. The Honor 10’s notch is also quite smaller than the iPhone X and the phone gives you the option to disguise the notch by blacking out that part of the screen.

Under the hood is Huawei’s proprietary Kirin 970 chipset which houses a dedicated chip for machine learning tasks. The same chipset is also found in a range of other Honor and Huawei devices including the P20 Pro and the Honor View 10. You also get 6GB of RAM and 128GB of storage. There is no option to expand the storage via a microSD card, however. The phone runs on EMUI 8.1 which is based on Android 8.1 Oreo. The under-glass fingerprint sensor relies on ultrasonic sound waves which Honor claims is more accurate that current capacitive fingerprint scanners. The implementation of that is such that even though it looks like there’s a capacitive home button at the bottom of the display, the sensor is actually embedded under the glass. One big advantage of the technology is that it works even if your fingers are wet or dirty.

At the back is a 16-megapixel + 24-megapixel dual camera setup. Both has an aperture of f/1.8 and relies heavily on machine learning to enhance images taken from the camera. On the front is a 24-megapixel shooter which also leverages AI to improve selfies.

It’s evident from the set of features and the premium design that the Honor 10 is poised to take on the upcoming OnePlus 6, which will launch the next day again in London. In India, the phone will be priced just upwards of Rs 30,000 and will be available on Flipkart from tonight.

Disclaimer: Honor paid to the travel and stay for our correspondent covering the event in London