Prices for the new device starts at $1,499 and it is available with up to an 8th Generation Intel Core i7 processor and up to 16GB of RAM 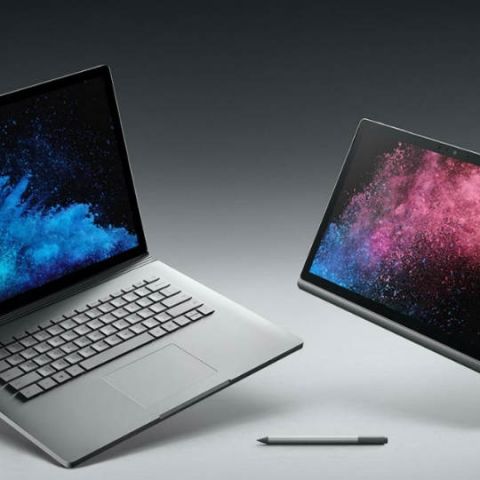 Microsoft has unveiled the second generation of its Surface Book device, called the Surface Book 2, the device is available in two variants, one with a 13.5-inch display and the other with a 15-inch display. Both come with the company’s PixelSense technology, and the display can be detached from the keyboard. Prices for the Microsoft Surface Book 2 start at $1,499 (approx Rs 97,500).

The Surface Book 2 is available with up to an 8th Generation Intel Core i7 processor and up to 16GB of RAM. Consumers also have the option of getting up to an Nvidia GeForce GTX 1060 graphics and and up to 1TB of storage.

Microsoft seems to have focused on the battery life this time around and the company claims that the new Surface Book can offer up to 17 hours of battery life. The company also says that the device is equipped with a 70% bigger battery than the 13-inch MacBook Pro. It also claims that the 13.5-inch Surface Book 2 offers a higher resolution than the 13-inch MacBook Pro.