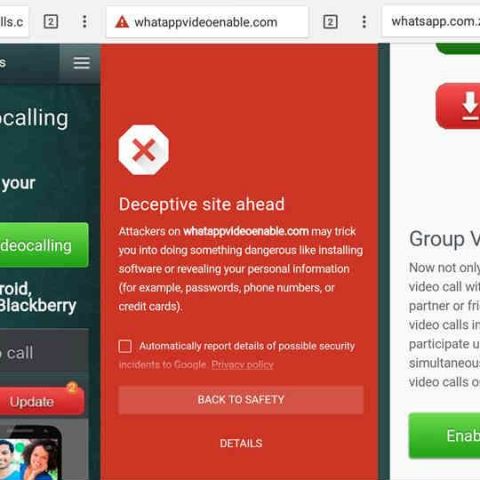 WhatsApp video calling is being rolled out as an update to Android, iOS and Windows Phone users and is not an invite-only update

WhatsApp has started rolling out the much anticipated video calling feature globally. The feature is now available to every Android, iOS and Windows users via an update. While rollout of the feature allows users to do video calls with their friends, it's also giving scammers an opportunity to introduce malicious code onto user's device.

WhatsApp users are getting link to a malicious URL, inviting users to download video-calling. Readers must note that WhatsApp is enabling video calling by default and you don't need an invite for the feature. The link also promises to add group video calling feature, which is currently unavailable on WhatsApp.

The malicious link reads, "You’re invited to try WhatsApp Video Calling feature. Only people with the invitation can enable this feature." Once you click on the link, it will ask you to invite more friends in order to activate video-calling on your device.

While the link leads you to a landing page that offers another clickable link and an invite system, which one might find legitimate. Clicking on the link could expose some of your personal data like contacts, mail, documents, etc. While, WhatsApp had introduced an invite system while rolling out the voice-calling feature, this isn't the case this time.

WhatsApp has always been prone to circulation of malicious URLs in groups and individual messages. Earlier there was a similar scam in the form of 'WhatsApp Gold', which promised to offer an exclusive form of the app. WhatsApp has been taking actions to circumvent such URLs by blocking access to third party WhatsApp clients.

WhatsApp's video calling feature became official on November 15 and the feature is being rolled out as an app update. WhatsApp says it has over 160 million users in India and continues to add new features to expand its user engagement.