The CEOs of the major 4 major tech companies all testified before the House Judiciary's Antitrust committee. Each company was questioned over various issues. The hearing was conducted virtually 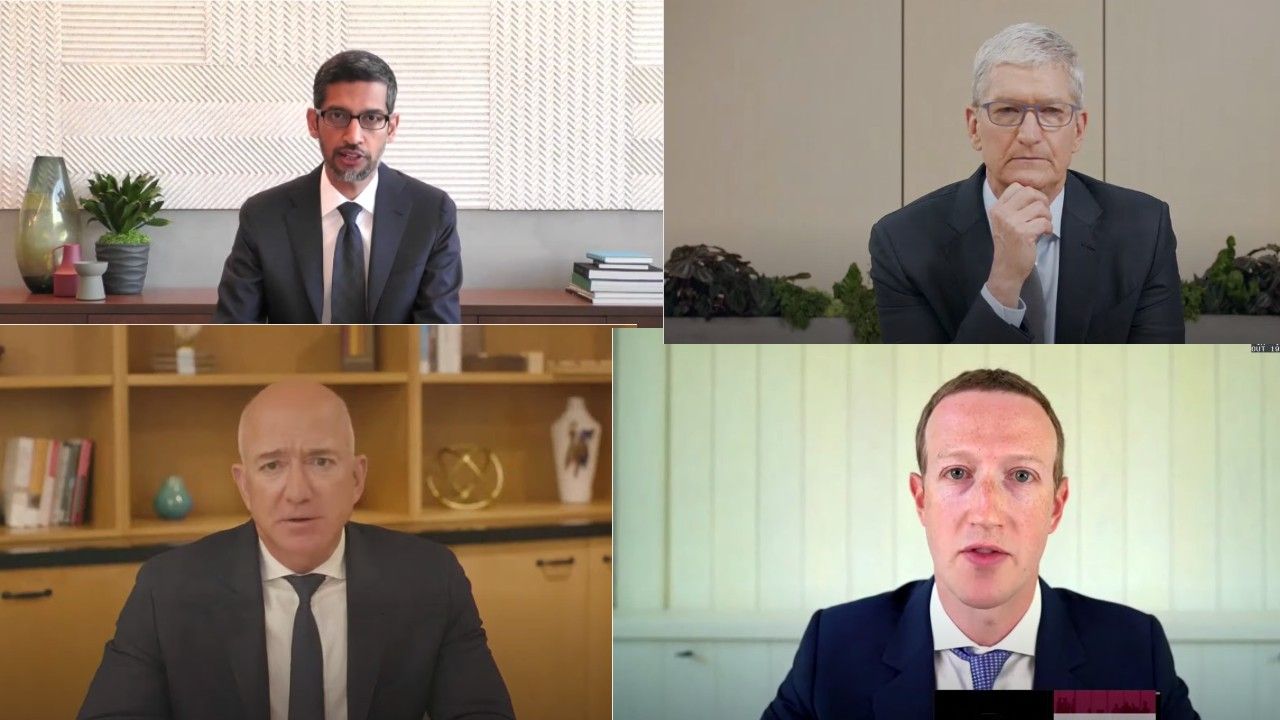 On July 29, CEOs of the 'big four' - Apple, Google, Facebook and Amazon - testified before the House Judiciary's Antitrust committee at a historic hearing in the US. It was the first time when Tim Cook, Mark Zuckerberg, Sundar Pichai and Jeff Bezos testified at the house at the same time.

The hearing was conducted virtually over a video call, and it lasted close to six hours where the committee scrutinized all the CEOs one by one. The influential figures were served with brutal bashing and tough questions with documents that raised serious concerns about killing competition using unfair tactics and power. It was intense. So intense that world's wealthiest man forgot to unmute his mic before speaking.

The grilling session was not just long, intense and historical but also an eye-opener for the company's and its consumers alike. Although the US and India have different antitrust policies and consumer data protection laws, the session still gives us a glimpse of the issue that might arise in future.

The committee gathered over 1 million documents from Apple, Google, Facebook and Amazon in its probe against them. Representative David N. Cicilline kicked off the hearing saying the panel had conducted a year-long investigation and found that these companies have “wielded their power in disruptive, harmful ways", which isn't fair for the competition and country's democracy. The purpose was to examine the dominance of these companies who own 70% of all online market sale in the US.

In their defence, each of the tech executives stressed on their contributions to the US economy. Facebook for free speech and expression, Google for ease of access to useful information, Amazon for making people's life easy with its services and Apple for providing an ecosystem of apps and its high products to support them.

Let's take a look at the most controversial questions asked each company representative during the hearing.

Google was explicitly accused of weaponizing its search engine to put rivals at a disadvantage and promote what makes them the most profit. Cicilline asked Pichai, "why does Google steal content from honest businesses?" He also accused that Google had “stolen content to build your own business,” referring its practice of culling and with search results displaying that information on top. Cicilline also accused Google of monitoring web traffic to “identify competitive threats.”

Pichai, in Google's defence, opposed the accusation of Google stealing content and putting rivals at a disadvantage. “Today, we support 1.4 million small businesses supporting over $385 billion in their core economic activity,” he said. “We see many businesses thrive, particularly even during the pandemic.”

In response to mulling search results for company profits, Pichai said, "We’ve always focused on providing users with the most relevant information." He claimed that the majority of queries in Google don’t show ads at all. "We show ads only for a small subset of queries, where the intent from users is highly commercial", he added.

Cicilline followed up by asking the value of Google's ads business, to which Pichai responded that it's around a hundred billion USD.

Pichai, in the end, tried to explain how Google also has competition by giving an example where he claimed 55% users come looking to shop online search for products on Amazon.

The last question to Google was if it ever used its surveillance over web traffic to identify competitive threats. To which, Pichai replied, "just like other businesses, we try to understand trends from data, which we can see, and we use it to improve our products for our users."

The wave questions to Mark Zuckerberg started with Facebook's political censorship and went on to the Instagram controversy where the social media giant is accused of killing the competition by acquiring it.

Rep. Jerrold Nadler, the top lawmaker on the House Judiciary Committee, mentioned of a 2012 message in which Zuckerberg has apparently stated that he sought to acquire Instagram, which was a rising threat to Facebook, considering it could "meaningfully hurt us". In addition to this, he also highlighted other Facebook communications that referred company's acquisition strategy as "land grab".

"I think with hindsight, it probably looks like obvious that Instagram would have reached the scale that it has today. But at the time it was far from obvious,” Zuckerberg said in his response. He gave Path's example, which was also a popular camera app when Facebook acquired Instagram and said, "it was not a guarantee that Instagram was going to succeed". He tries to explain if Facebook didn't acquire Instagram, it could either be a hit or could have been vanished by now. He claims it's successful because of their investment into infrastructure, security and promotion of the platform after its acquisition.

The acquisition has done wildly well, largely because not just of the founder's talent, but because we invested heavily in building up the infrastructure and promoting it and working on security and working on a lot of things around this."

To conclude his part, Nadler closed the charge saying, "This is exactly the type of anti-competitive acquisition that the antitrust laws were designed to prevent. This should never have happened in the first place. It should never have been permitted to happen, and it cannot happen again."

Apple's hearing was relatively calmer compared to the other three. The company was cornered majorly for its level of control over the App Store and inequality among developers. Some lawmakers accused the company of taking up 30% commission on in-app sales and subscriptions, that has also troubled big companies like Spotify. These companies have to pay a significant part of their revenue to Apple to "fund the entire app ecosystem".

Cook said that Apple has not raised its commission since the launch of the App Store in 2008. “We do not retaliate or bully people,” he said. “It is strongly against our company culture.”

In similar regard, Apple was accused of concerns that "the governing the App Store review process are not available to the app developers". Also, for changes its policies as per its benefit and not treating all developers equally.

To which, Cook replied, "we treat every developer the same. We have open and transparent rules. It’s a rigorous process because we care so deeply about privacy and security and quality."

It was the first time for Jeff Bezos in front of the house, and it was intense scrutiny with tons of questions thrown at him. The key allegations were around, misleading the committee about its practices in controlling data from third-party sellers not treating its "partners" (small sellers) in the right manner and having a monopoly over them.

Jeff Bezos denied the allegations of using third party seller data for their benefit. In response, Democratic Rep. Pramila Jayapal revealed public reports that indicated to the contrary, prompting Bezos to offer an admission of potential fault. Bezos said, “what I can tell you is we have a policy against using seller-specific data to aid our private label business, but I can’t guarantee you that policy has never been violated.”

For the majority of the hearing, Bezos either said he couldn't answer the question or couldn't recall or identify the incident he was being asked about.