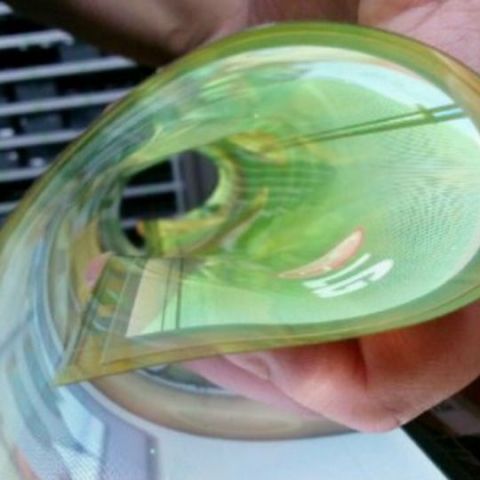 It seems LG is finally ready to truly show-off its flexible rollable OLED screens. According to a report by The Verge, the South Korean electronics giant is showcasing its previously seen 18 inch flexible OLED screen at the Consumer Electronics Show, 2016 (CES). In addition, the company is also going to exhibit the technology in the form of a 25-inch curved screen installed inside a car, while there will also be a 55-inch “paper-thin” television at the CES showcase. While we’re yet to see live demos of the same, we will be bringing you new information as soon as possible.

The rollable OLED, which can literally be rolled like a newspaper, is a technology that LG has showcased before. In fact, LG SVP and Head of R&D, In-Byung Kang, had said then that the company is confident of delivering an ultra-HD flexible and transparent OLED panel. He had also said that the 2017 version would have transmittance of over 40% and a curvature radius of 100R. While we aren’t sure whether the panels expected at CES 2015 are anywhere close to that, we should know soon enough.

Rollable, flexible and curved display panels have seemed to be the next step for OEMs for a while now. While there are a bunch of Curved TVs that one can buy, 2015 was curved display panels on smartphones like the Samsung Galaxy S6 Edge and Galaxy S6 Edge Plus, along with the LG G Flex 2, which had earlier been preceded by the LG G Flex smartphone. While these displays and their utility are far from perfect at the moment, OEMs are putting a lot of money behind making them mainstream.

While curved displays may not make a big difference on smartphones, their utility does become easier to discern once put into use elsewhere. In a car, for example, a Curved display can help the driver or his passengers in a lot of ways. The usage for such displays can also be in the home environment, while industrial usage isn’t out of bounds either.