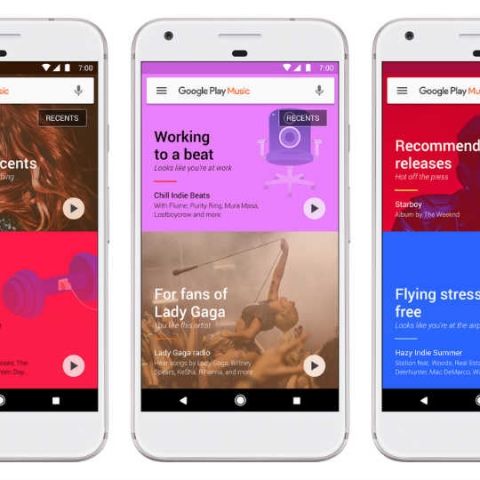 Google released a revamped version of Google Play Music yesterday. The company revealed that the new overhauled music player will be backed by Google's machine learning and contextual tools.

Announcing the launch , Elias Roman, Lead Product Manager, Google Play Music stated in a blog post, "Building on our commitment to help you find the right music for any moment, today we're introducing the new Google Play Music - a fresh take on our music streaming service that is smarter, easier to use, and much more assistive."

“To provide even richer music recommendations based on Google’s understanding of your world, we’ve plugged into the contextual tools that power Google products. When you opt in, we’ll deliver personalized music based on where you are and why you are listening — relaxing at home, powering through at work, commuting, flying, exploring new cities, heading out on the town, and everything in between. Your workout music is front and center as you walk into the gym, a sunset soundtrack appears just as the sky goes pink, and tunes for focusing turn up at the library,” he added.

The revamped app uses machine learning to figure out user preferences and recommends personalised music taking into account factors such as location, activity, and even the weather.

There is also a new home screen with links to your favourite tracks right at the top of the screen. Added to this is the option for an offline playlist. Once users subscribe, they are offered an offline playlist based on the tracks that they might have listened to recently.

The tech giant revealed that the new app will be released to users in 62 countries. The list however does not include India and Indian users might have to wait for some time. The app came to India for the first time in September 2016 after it was first launched in 2011.