If you like to party, or sit at the couch and game all day, or even if you are always on the move, we have something for you. 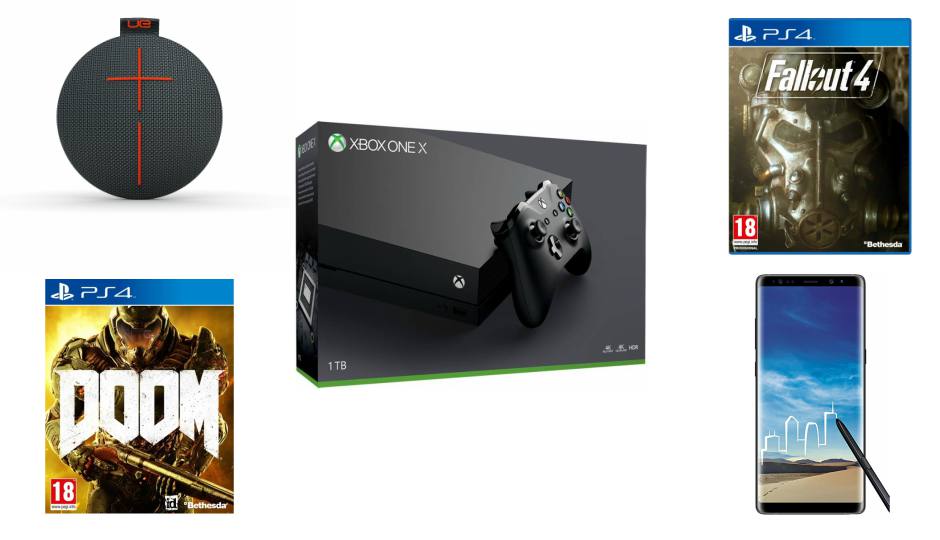 Like everyday, we spend some time scourging the internet for good deals on products that we know are good in their respective categories. And for today we have something for the power-user, the trigger-happy gamer and the party animal. Dig in!

The Samsung Galaxy Note 8 is just the same as the new Galaxy S9+. Only without the dual aperture camera. And the stereo speakers. Okay. It may not be as advanced as the Galaxy S9+, but it’s one of the most powerful Android phones around. Add to that, the new and improved S Pen experience and that gorgeous display, this is made for the power user. If you are a power user and looking out for a reliable, top of the class smartphone that won’t “blow up”, Amazon is offering Rs 8,000 discount on the 64GB variant of the phone which retails for Rs 67,900. The discount will be given as Amazon Pay Balance that can be used for further purchases, like may be a good case? You can buy it here

Wouldn’t it be perfect to have a planet-proof wireless speaker that also sounds good? Boom! There’s the Ultimate Ears UE Roll 2. It’s shaped like a space-ship (or an idli, if you will), can withstand 1m of water for up to 30 minutes, pair 8 Bluetooth devices, wirelessly stream to more UE Rolls, and play from a range of up to 20 metres. It lasts for around 9 hours and is available at a 53 percent discount at Rs 3,999, down from Rs 8,495 during launch two years back. It may not be one of the new smart ones, but it definitely packs a punch. You can buy it here

It’s not called the ‘King of Consoles’ for nothing. The Xbox One X ushers in the new generation of console gaming. With both backwards and forward compatibility, this is one of the most versatile consoles out there. With around 6 Terraflops of graphical prowess, this one’s a beast that can play games in 4K resolution at 60 frames per second, support Blu-ray UHD discs and Dolby Atmos. There’s a small discount of Rs 1,990 on the console on Amazon right now and if you were thinking of grabbing one, now is the time. Use the saved cash for a Xbox Game Pass for Rs 699 and you’ll be all set. You can buy it here

Considered one of the most hyped games of 2015, Fallout 4 is one of Bethesda’s masterpiece. We won’t give away the storyline but it includes all the good parts of the previous Fallout games along with some new surprises. This also has a different story line and quite an addictive one at that. Pick this up from Flipkart for  just Rs 888.

Doom needs no introduction. It set the benchmark for FPS gaming back when it launched. So when a reboot came last year, one had to sit up and take notice. The fourth in the series, and one of the first major installment since Doom 3 in 2004, Doom is the reimagination all the gore, all the gut-wrenching executions and the dystopian environment in rich 4K graphics. Pick this up from Flipkart for just Rs 999.