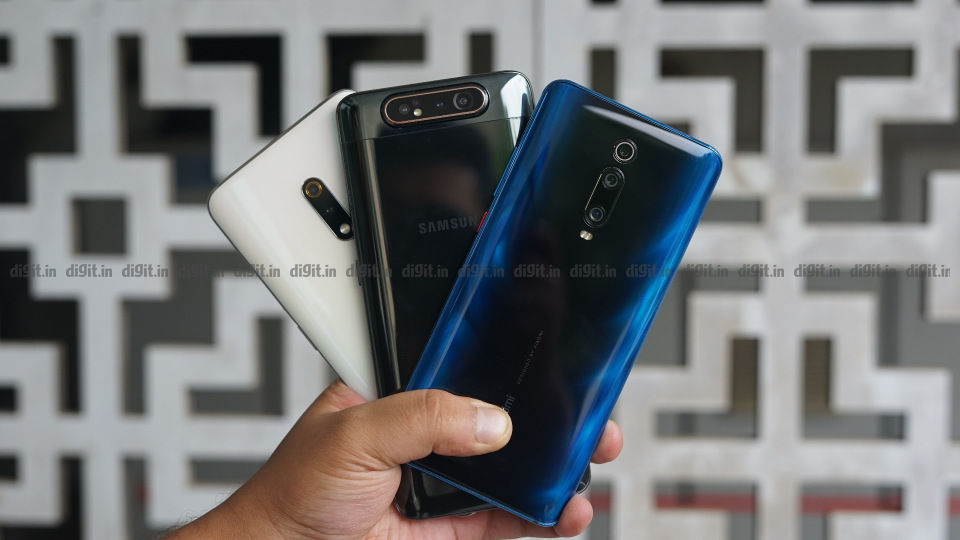 Here’s the spec-sheet of the three phones for a quick comparison. 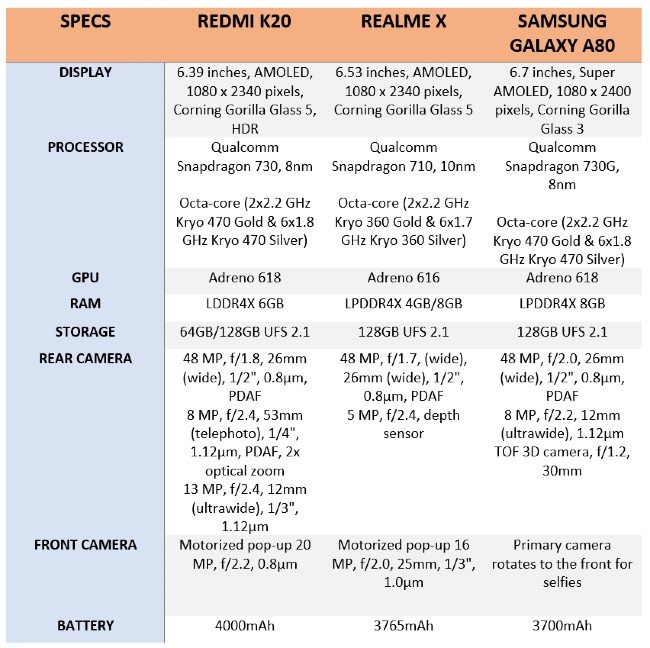 On paper, they are pretty evenly matched. Save for a few nitty-gritties, the Redmi K20 and the Realme X are quite identical in the design and experience. The Galaxy A80 does feel a little more premium for the materials used and a seemingly brighter and vivid display, and the rotating camera will catch a lot of attention, but the functions are more or less similar to the other two in this comparison. The major differences are in the hardware under the hood, namely the processor.

Between the SD730 and SD730G, the difference is minimal. The CPU cores and the architecture are identical with both using Kryo 470 Cores. What’s different is the GPU. The SD730G uses an overclocked Adreno 618 GPU while the SD730 sticks to the regular variant. This, Qualcomm promises leads to a 15 percent boost in graphics rendering. In this comparison, we put that claim to test to see just how much of a difference the SD730G makes with an overclocked GPU. Is it enough to warrant a Rs 50k price-tag?

The leap in performance in the Redmi K20 and the Galaxy A80 is pretty evident. The more advanced Kryo 470 core allow the Snapdragon 730-powered K20 and Snapdragon 730G-powered Galaxy A80 to be around 21 and 18 percent respectively on AnTuTu. The same is in the case for Geekbench single core and multi core CPU tests. There, the difference is more apparent in single core performance. Mobile Xprt and PCMark Work 2.0 tests, which measure performance using real world simulations also peg the two Snapdragon 730-powered devices to be superior.

What’s interesting to note is the Redmi K20 is around 3 percent faster than the Galaxy A80 on AnTuTu and around 1.5 percent faster on Geekbench Single Core and Multi Core. That could either be a natural variance in scores which should get normalised after repeated trials, or could be because Xiaomi has better optimisations in place which results in higher scores.

The GPU benchmarks tell a whole different story. The overclocked Adreno 618 outperforms the others by a good 21 percent on 3DMark Slingshot. The Redmi K20’s GPU is also around 18 percent faster than the Adreno 616 on the Realme X. GFXBench scores also tell the same story. Save for one test, GFXBench also pegs the Galaxy A80 faster than the rest. 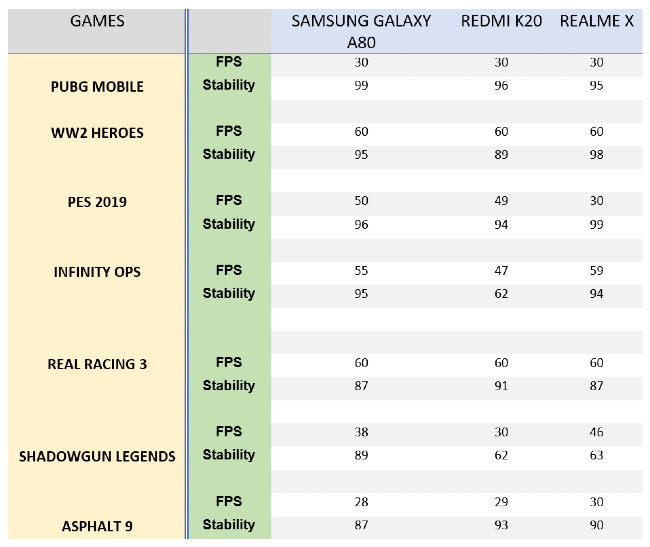 The frame rates and the stability percentage recorded using Gamebench show that synthetic benchmark results and real-world results are quite different. If the benchmarks pegged the Galaxy A80 and the Redmi K20 to be a lot faster than the Realme X, our gaming performance comparison shows that’s not always the case.

We played 7 seven games, all of them with rich graphics that can go upto 60 FPS given the hardware. Let’s look at each game’s performance individually. 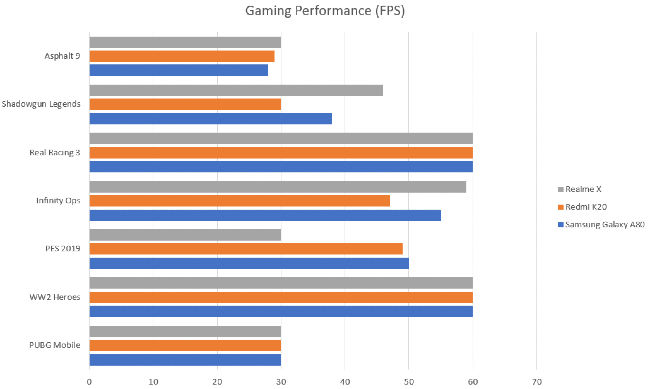 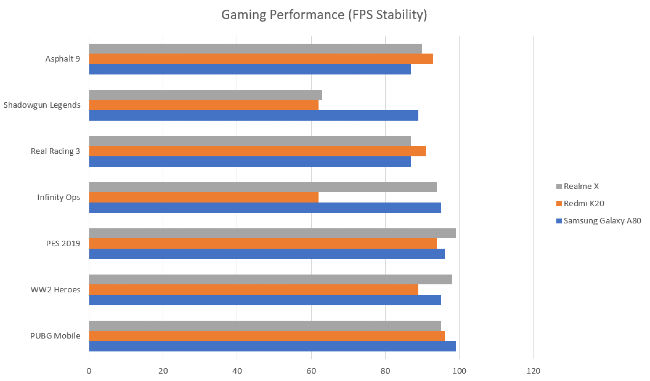 The popular battle royale game runs smoothly on all three phones. All of them manages to achieve 30 FPS with more than 95 percent stability. The Galaxy A80 offers the best experience, at least as far as the graphics and textures are concerned. But the touch response on the Galaxy A80 is pretty shoddy. That way both the Realme X and the Redmi K20 offers special features for the game which includes haptic feedback while shooting. Interestingly, none of the three devices were capable of going to 60FPS in the game which is something the flagship Snapdragon 855-devices can do.

Set during the first world war, this game also has rich sceneries and arenas where you fight out enemies with three more teammates in deathmatch format. Impressively enough, all three devices were able to achieve 60 FPS on the game with the graphics settings maxed out. And in this case, it’s the Realme X that offers the best performance with 98 percent stability. The Galaxy A80 is also not far however with 95 percent stability. But this is one example where the Snapdragon 710 seemingly performs better than its successor.

The Konami-made football game gave us an idea of how sports games are handled by the phones. Here again, the Snapdragon 730G-powered Galaxy A80 offers a better experience, marred only by poor touch response. The Redmi K20 follows closely after while the Realme X offers the best stability.

We have seen phones hit 60 FPS and the Realme X nearly achieves it with 59 FPS and 94 percent stability. This is a fun game with a deathmatch mode and lots of cool weapons and the Realme X offers the best graphics and gameplay out of the three.

This realistic racing game ran at 60 FPS on all three phones with a nearabout similar experience on both the Galaxy A80 and the Realme X. The Redmi K20 however offers the smoothest gameplay with 91 percent stability.

Known for stressing out devices, the results from this game can spark a lot of debate. On one hand we have the Realme X that had a higher median frame rate of 46 FPS but with a poor 63 percent stability while the Galaxy A80 offered 38 FPS but with a higher 89 percent stability. The Redmi K20 also performed poorly managing just 32 FPS with 60 percent stability. This is a game even flagship devices struggle to max out, so we don’t blame these devices for not achieving 60 FPS at all. Instead, it’s the stability that matters in such cases and here, the Galaxy A80 offers the best experience.

Yet another racing game, this one is known for its fast gameplay and rich graphics. Here, the Realme X and the Redmi K20 gave a better experience. 93 percent stability on the K20 meant the visuals were rendered much smoother, not that the others were too far behind.

Looking at the numbers, all three smartphones offer excellent performance. Qualcomm has done a good job tuning the 7-series chipsets to trump over the regular mid-range SoCs. And between the three, the Redmi K20 has the best CPU performance. It's around 21 percent faster than the previous generation and as indicated by the AnTuTu numbers, it's even 3 percent faster than the Snapdragon 730G. On GPU benchmarks and gaming however, the Galaxy A80 does perform better thanks to the overclocked GPU with a good 21 percent boost in 3DMark Slingshot numbers over the Snapdragon 730. But the Galaxy A80 is not meant for gaming. The bezel-less screen on the Galaxy A80 has poor palm rejection on the display, so much so, that gripping the phone is almost impossible if you want to prevent your palms from accidentally touching the panel. The Redmi K20 and the Realme X, also with bezel-less screens, doesn’t have any problems in rejecting accidental touches from the palm while gripping. As a result, they are much better in the overall gaming performance.

Now that it’s established that the Snapdragon 730G does indeed offer better performance than the other two, does it still warrant a 50k price tag? As far as gaming and daily tasks are concerned, no. The Galaxy A80 sounds way too overpriced for hardware that’s just a little faster than the Snapdragon 730-powered Redmi K20 which starts at Rs 21,999. The Galaxy A80 tries to take on the mighty OnePlus 7 Pro but sticks to lower-end hardware. However, the Rs 3,000 price difference between the Redmi K20 and the Realme X is more than justified. There is a massive leap in performance owing to more advanced manufacturing and CPU architecture and also a faster GPU. The Redmi K20 is a faster phone than the Realme X, all-round.