Biggest tech stories that made news in 2017 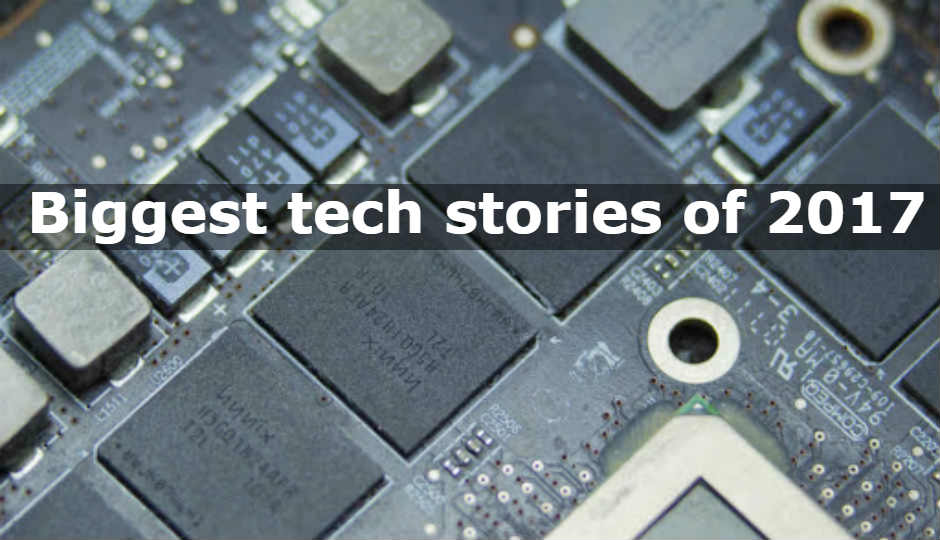 That’s the thing about technology. It shapes and reshapes the world with every new announcement, every new launch and sometimes, with every goof up.  2017 was a mixed bag of everything. On one hand we had Elon Musk unveiling his plans to make inter-continental travel lightning fast by using rockets, and then on the other hand, we had massive cyber security breaches in the form of ransomware attacks. As if Twitter was not being abused by power-hungry despots enough, the microblogging site increased its character limit to 280. And speaking of Twitter, fake news managed to become one of the biggest news stories of the year. Ironic, isn’t it?

Nevertheless, we listed out all the stories that was big in tech this year. Some were were disappointing, some outrageous and some were outright futuristic, but all of them combined act as a precursor to what will go down in 2018, and by the looks of it, it’s not going to be any less crazy.

Google made the biggest splash of the year when it announced the acquisition of HTC’s mobile division for $1.1 billion. The Taiwanese phone maker, known for its long-standing relationship with Google, was in a bit of a soup after its devices failed to dazzle in the market. As part of the deal, Google acquired 2,000 employees of the company along with non- exclusive licenses for HTC’s patents, but not its factories. HTC has already helped Google makes its Pixel phones and now, it will work more closely with Google to develop the hardware-software harmony that Apple enjoys. While this may sound like what Google did with Motorola back in 2011, this time it’s different. Google hasn’t bought HTC outright. The company will still make its own phones and VR headsets and will welcome the cash infusion with glee.

Remember the Apple vs Samsung patent wars? That was the landmark patent-based war in mobile tech, until Apple and Qualcomm started sparring over licenses and patents. This time, it’s for a chip that turned the iPod into the iPhone. Qualcomm provides the cellular modem that helps phones connect to a cellular network and for that, Qualcomm charges hefty royalties from phonemakers. Apple, a long-time customer of Qualcomm wasn’t having any of that and decided to reduce the royalties it has to pay. This flared Qualcomm up and the chipmaker filed a lawsuit against Apple for patent infringement, triggering the patent war. There have been multiple suits and counter-suits with no final result whatsoever.  The patent war has made companies choose sides as well. Long-term rivals Samsung and Google has sided with Apple while its toughest competitor, Huawei has also refused to pay royalties to Qualcomm. It remains to be seen what will finally come out of this battle, but so far, neither sides seems to be backing down.

Elon Musk, the billionaire disruptor managed to turn non-believers into fans of Tesla when he unveiled the second-generation Roadster, an electric car that can go from 0 to 60 mph in 1.9 seconds with a top speed of 250 mph. That’s the fastest any car can go, let alone an electric car. Moreover, the Roadster will have a 650 mile range, which is a significant milestone for any electric car which has been criticised by sports car enthusiasts precisely for its poor range. Tesla promises to change the game with being the only supercar to go for that long without having to make a stop for refueling. But if you are thinking of getting one, there’s bad news. The Roadster will not be out anytime before 2020 and considering Tesla’s track record, the wait may even be longer than that.

Reliance Jio’s entry into the 4G market changed the entire landscape of Indian telecom industry. The Mukesh Ambani-led company led a year-long tirade against telcos to lower their data prices, and just when you thought it was going to be over, the JioPhone was launched. Termed as a smart feature phone, the JioPhone supports internet browsing and free calls over VoLTE as well as a suite of Jio apps. But more important than the phone was the price it launched for. Reliance took everyone by surprise when it announced a refundable price-tag of Rs 1,500 for the phone, which set off a whole new trend of making smart feature phones. Soon enough, both Airtel and Vodafone were out with their own versions of it and much to the delight of the customer, there were suddenly more options to choose from on a tight budget.

The writing was on the wall for a long time. Microsoft’s failed attempt at grabbing a share of the smartphone market and compete head to head with Android and iOS was finally eulogised this year when in a series of Tweets, Microsoft’s head of operating systems announced the death of Windows 10 Mobile. To be honest, Windows phone have been dead for more than a year, but Microsoft never officially admitted. Microsoft shut down its phone business laying off thousands of employees last year and moved from the mantra of “mobile-first, cloud-first” to a focus on the “Intelligent Cloud” and “Intelligent Edge”.

While Microsoft decided to hold a funeral for Windows Mobile, a long-standing partner which sank along with Windows phone made a comeback this year. Nokia rose from the ashes under the stewardship of HMD Global to come out with a lineup of pure, stock Android phones. How times change! And to celebrate its return, Nokia even brought along a reimagined Nokia 3310 to the party. Nokia had been out of the smartphone business for quite some time when rumours started going round last year about a possible comeback. Soon enough, during MWC in Barcelona this year, HMD Global shared the good news with everyone and by the middle of 2017, Nokia phones were in the market running stock Android.

2017 was the year when cybersecurity became a huge pain point for everyday consumers as Windows PCs across the world got hit by the Wannacry ransomware first and then subsequent exploits of the same bug. The ransomware exploits a vulnerability first uncovered by the NSA which then got into the hands of hackers. Soon enough, it brought computer systems in the US, China and Russia down to their knees. The ransomware locked users out of their data and demanded a ransom to unlock it. The bug was released by a group of hackers who go by the name Shadow Brokers after they got hold of a big stash of NSA documents leaked by Wikileaks.

One of the most crucial factor behind Twitter’s success was its 140 character limitation that set off the whole microblogging trend. Over the years of Twitters existence, the social media became home to some of the world’s most powerful and influential individuals who shared their two-pence over tiny tweets. Twitter realised people had more to say in one go, so it doubled the character limit to 280 giving Twitter users like Donald Trump more space to spew venom over the internet.

Elon Musk picked an idea straight out of the Jetsons and proposed to turn it into reality. Musk wants to use the same  SpaceX interplanetary rocket system that he’s building to go to Mars to enable long-distance travel on Earth. His promise? “Anywhere on Earth in under an hour,” for about the same price you pay for an economy airline ticket. Even though it’s still theoretical and Musk hasn’t given a timeline for us to see it in action, the mere proposal created ripples around the world.

It’s the word of the year for many, but fake news became an undesirable byproduct of social media giants like Facebook and Twitter when people in the US woke up to the news of Russians using psychological and technological means to ingest fake news stories on Facebook and Twitter to sway the US elections in the favour of Donald Trump. India too grappled with its own incidence of fake news as WhatsApp forwards increasingly became a polarising source of information and many decided to act on it. And not in a good way.