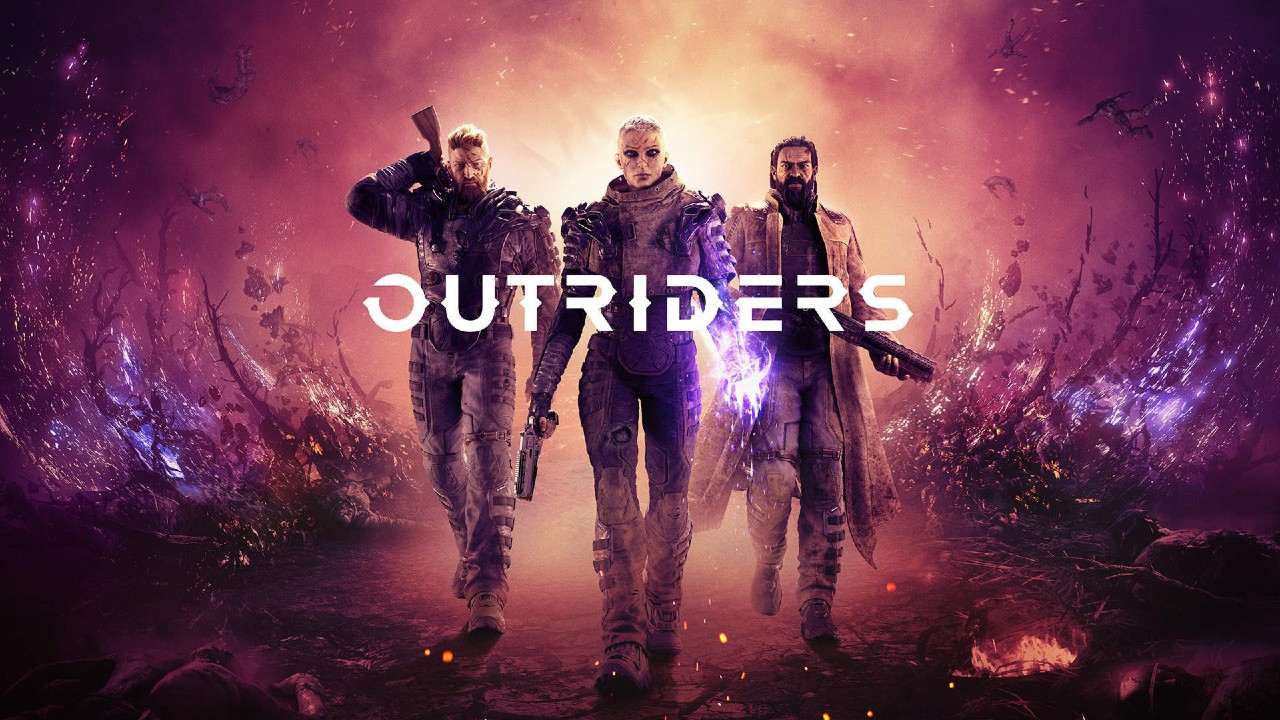 Outriders Review: This is a fun looter shooter, especially for the lone wolf

Before we get into the details of Outriders, I must warn you that I am not a fan of the looter shooter genre. While I have enjoyed a few rounds of Destiny and The Division, these games have never immersed me for one single reason - if you don't have friends to play with, the game isn’t fun. And that’s generally the case with looter shooter games. To my surprise, Outriders is a looter shooter that’s a lot of fun when played alone and immense fun when played with friends. The game has a good balance of combat, difficulty and some special abilities to spice up the gameplay.

Developer, People Can Fly, delivered a great tongue in cheek action flick story in Bulletstorm, but that isn’t the case here. While there are moments of levity thrown into the mix, the story of Outriders is relatively serious. The earth is no longer inhabitable, and humanity is looking at the planet Enoch to rebuild civilisation.

As expected, things don't go according to plan. After a brief tutorial, you find yourself in cryosleep for 31 years. After awakening, you realise that not only are the humans fighting among themselves for resources, but there is a storm that transforms some people into the “Altered”, giving them special abilities. Surprise, surprise, you are one of the Altered and must save the day.

While it is difficult to take the overarching story seriously, the subplots and side missions intrigued me. There is one mission where you must investigate the mishaps in a mine only to find out that an ally is misusing the mine for his benefits. There is also a plot where you need to deliver a message to a wounded old man’s daughter, only to discover she is dead and lie to the old man that all is well. There is also one side mission where soldiers are vanishing and forced into a cult, and you have to save the day. These subplots are exciting and have the potential to inject some humour into a story that tries to take itself too seriously. Nonetheless, Outriders story is more about getting you from point A to B driven by a bunch of guys taking themselves too seriously. It might sound cheeky, but it’ll start growing on you. 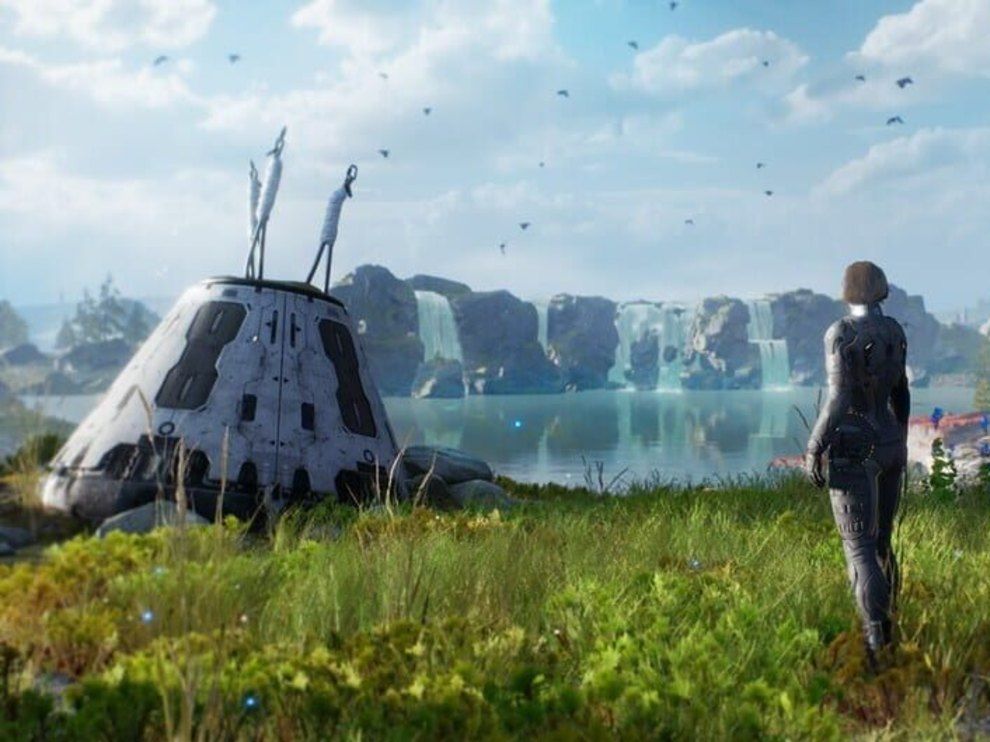 Outrider is a third-person cover-based shooter, but it encourages you to leave cover from time to time. It is a looter shooter best enjoyed with friends. However, you can enjoy the game alone. The game lets you choose from four classes - The Trickster, who can manipulate time and space; the Pyromancer, who can manipulate fire; the Devastator, who unleashes seismic attacks like an earthquake; and the Technomancer, who uses devices like turrets. I have been playing the game using the Pyromancer class.

On the DualSense controller, a player can equip three abilities at a time - one to each shoulder button, while the third ability is triggered by pressing both the shoulder buttons together. While the game offers cover-based shooting, it encourages you to move around the battlefield and use your powers as often as possible. The cooldown for your capabilities is relatively quick, and you regenerate health when you use your abilities. There are no health packs to be found. 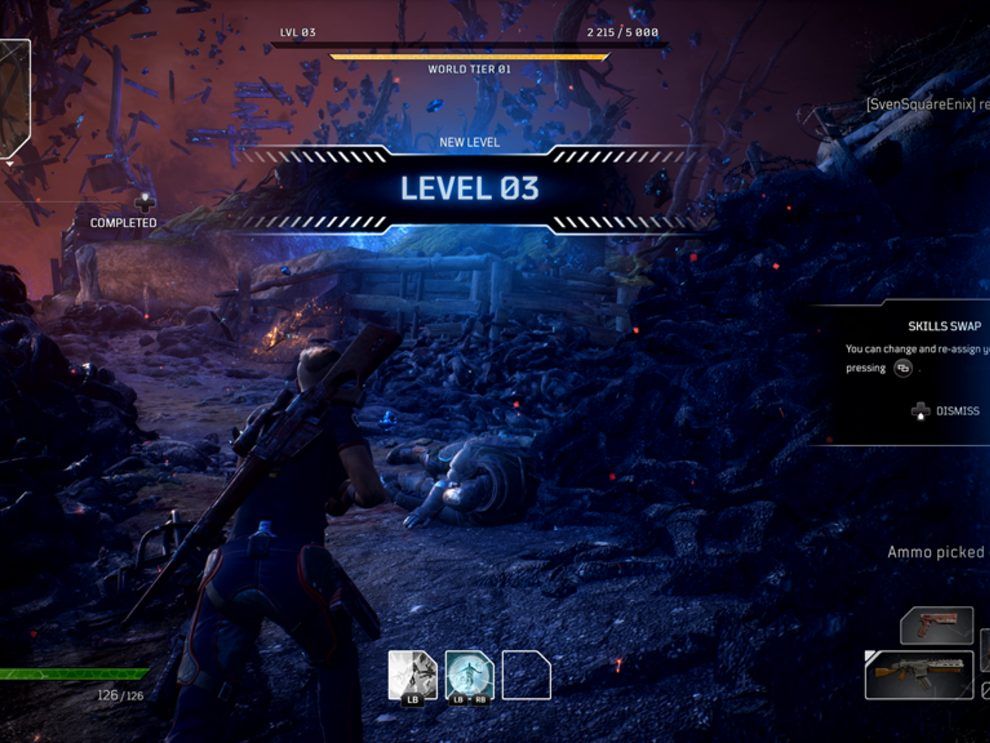 Each level is divided into areas where you take on a hoard of enemies, and each area has some strategic vantage point overlooking each cover space. The enemies thrown at you also vary. There are some who will run at you with melee weapons, other heavily armoured enemies with shotguns who will slowly come at you, some snipers, and a hoard of assault rifle-wielding goons that will flank you from all possible angles. Needless to say, the action can get quite frantic.

Thanks to the mix of enemies, you cannot stay behind cover for too long, and that’s the beauty and fun of Outriders. Shoot a few enemies, retreat to cover, flank an enemy, use some special abilities, move to the next cover spot; the action makes Gears of War feel like child play. It’s this frantic action that will keep you at the edge of your seat and is a lot more fun when playing online with friends. 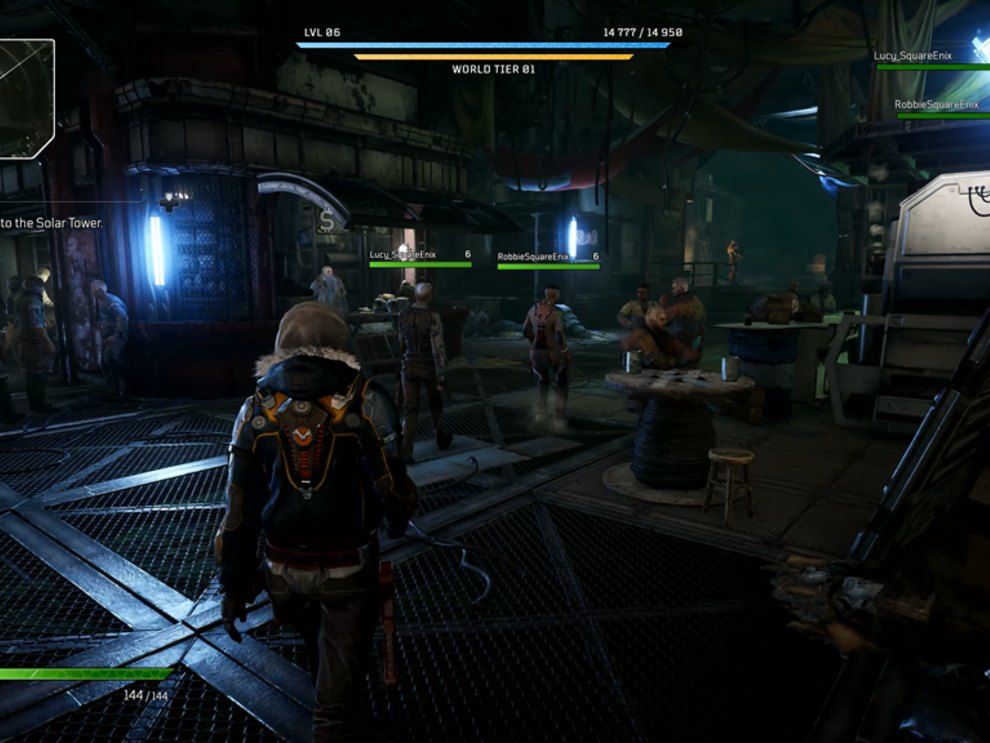 The Pyromancer has many abilities such as setting enemies ablaze, absorbing enemy's health, freezing enemies in place using an ‘Ash’ ability, a blast that sets close-by enemies ablaze and more. The more you use your special abilities, the more chance you have of surviving an encounter.

In addition to the diverse set of enemies, the game also throws some ‘Altered’ enemies at you with the same ability as you or one of the four classes mentioned above, adding a unique twist to the combat. You have a window of opportunity to stop them from making a special attack, and it’s the fights with the altered enemies that serve as the heated boss battles in the game.

When it comes to weapons, you can carry two weapons with you in addition to a side-arm and, as with any looter shooter, can upgrade the stats of the weapons you collect. You can also add some special buffs to the weapons giving you abilities like momentarily freezing an enemy in place, or setting them ablaze, or giving you some shield protection; the list is quite long. You can also customise the armour you collect and add these buffs to them as well. 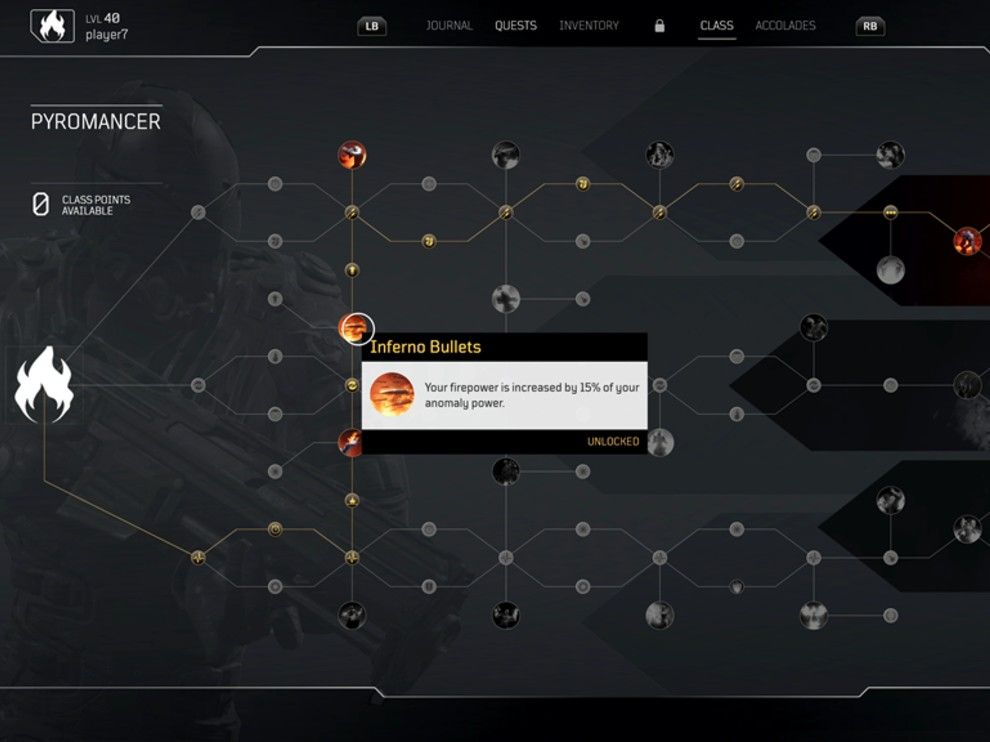 Considering the diversity in the arsenal, I highly recommend you try out multiple weapons and strategies before settling on one.

Overall, it’s the gameplay more than anything else that kept me hooked and coming back for more. I am about 15 hours into the game, and the campaign’s end is not yet in sight. I have, however, indulged myself in almost every side quest I have come across. 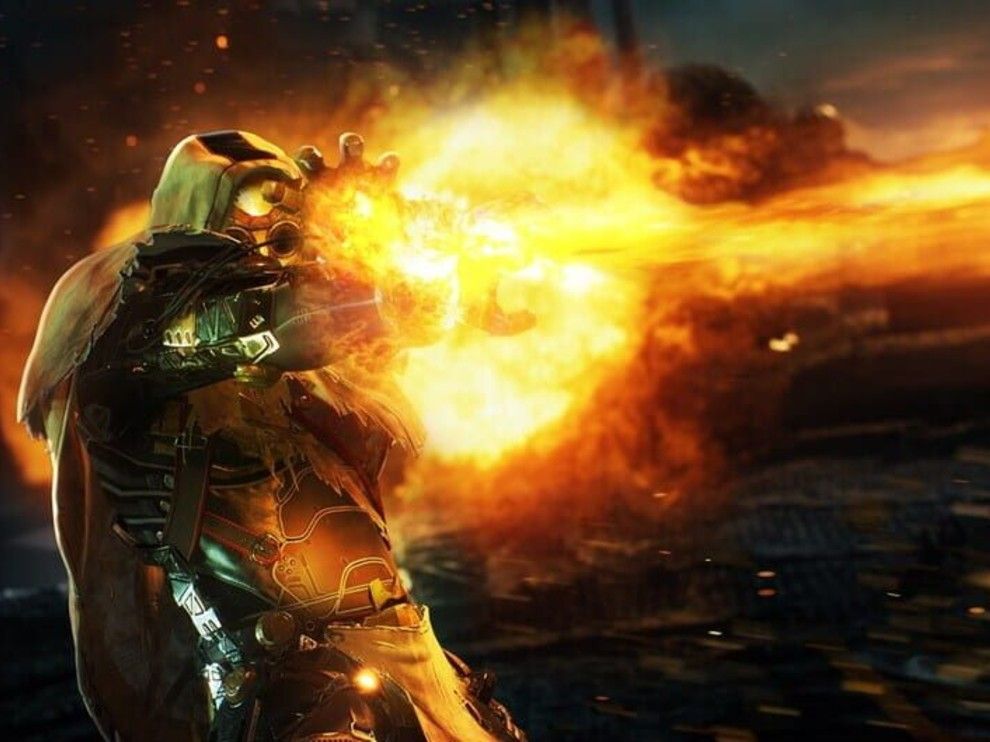 I played Outriders on a PS5 (review), and the first thing to talk about is the load times. Once you’ve logged into the server, all loading happened in under 5 seconds which is excellent. While we are on the topic of servers, it was pretty tough to log in on the launch weekend of the game, and Twitter was full of the Outriders servers being down. However, since then, I have witnessed a handful of disconnections, and the game crashed on me just once. Why can't the game be played offline in single-player mode?

Moving on, the game ran at 60 fps with some minor dips here and there. The game overall runs fluid, and 60 fps is much appreciated, especially during the frantic battles. 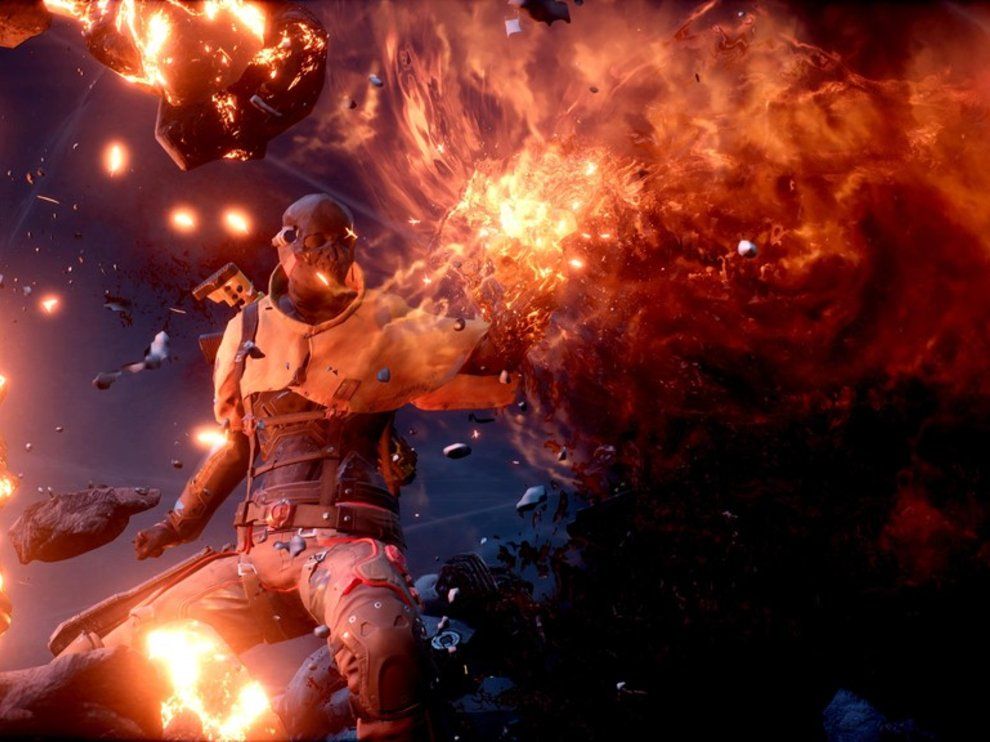 This comes at the cost of resolution, as you can make out some low-quality textures here and there. The characters’ facial animation is nothing to write home about, but a lot of their armour and clothing look rich.

You can jump into the menu to take a close look at some of the guns, and their designs are unique.

Overall, Outriders is no Ghost of Tsushima (review). Still, you visit some rich, diverse environments, and the game delivers in the one space that matters - consistent frame rate during frantic battles.

The voice acting is right out of a cheesy Hollywood flick and in line with what one would expect from the story. It's the sound effects of the explosions and guns that will hit your ears the most. In this respect, the sniper rifle has a nice loud thud to it, while the assault rifles have a consistent battering repetition one would expect. Even your unique altered abilities have a good wiggle and swoops when used. While the background score and voice acting aren’t great, the game’s overall sound design is sufficient to get you through the game. Besides, when playing with friends, you’ll hear them screaming more than the sound of the game. 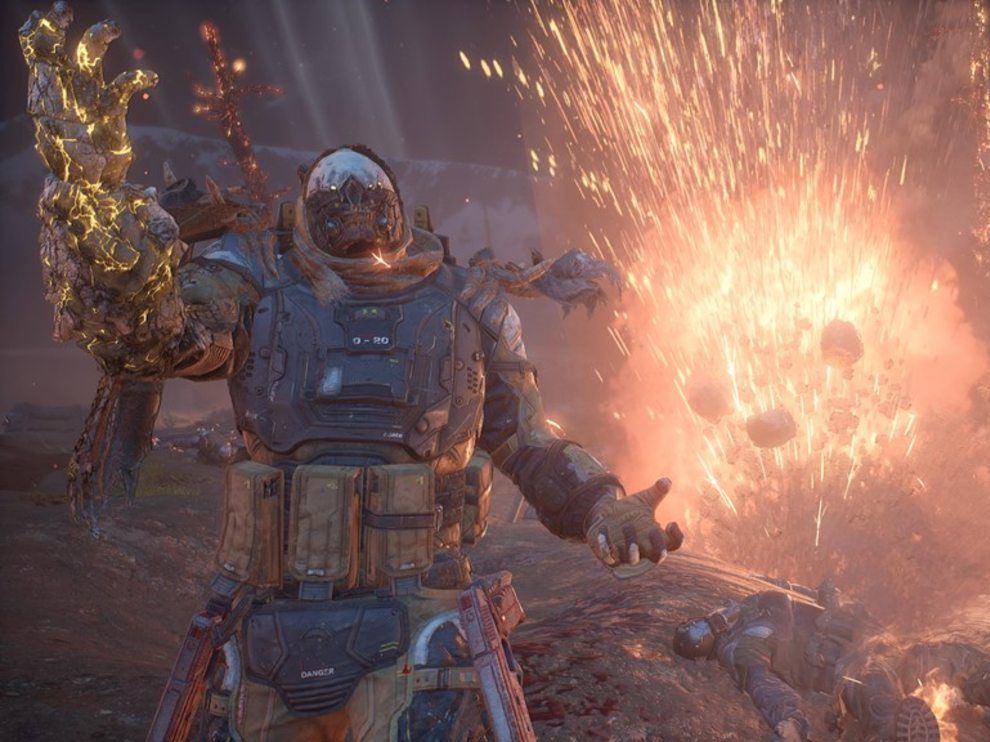 Outriders is a fun ride while it lasts. I wish I could test ride all the classes before settling on one, but that's one gripe in an otherwise fun game. Whether you are looking for a looter shooter solo experience or a night of social distancing gaming with friends online, Outriders has combat that’s frantic enough to keep you at the edge of your seat, ensuring you feel like you achieved victory at the end of every battle rather than making you feel like it was delivered to you on a silver platter. Be it solo or with friends, that’s the most important feeling. The story and music won't appeal to all, but you’ll be hooked if you enjoy the gameplay.

We played a review copy of Outriders on a PS5.