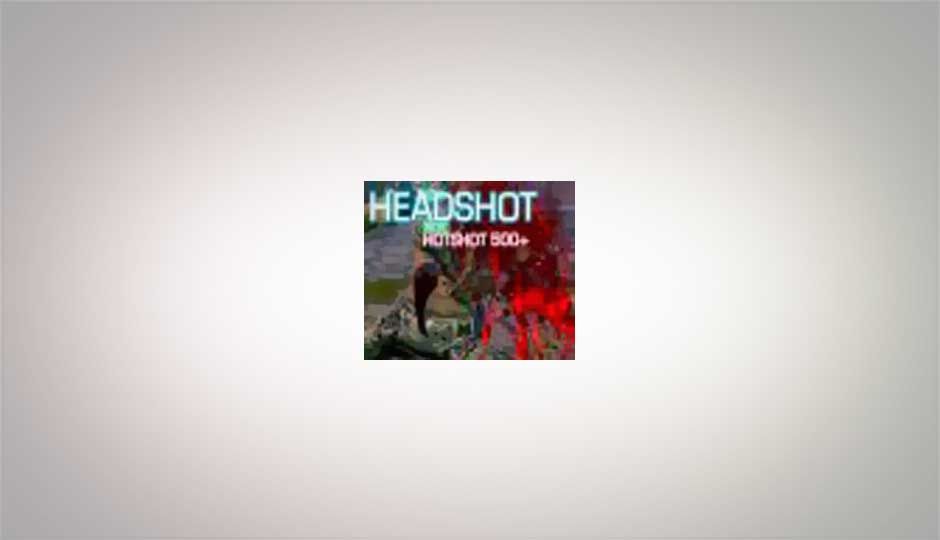 The joyous barrage of violence that is the Bulletstorm experience is worth a purchase, and neglecting the cliche and abrupt storyline, the addictive Echoes and Anarchy modes are the true selling points of the game, pitting your Skillshot creativity and precision against the hordes of frenzied gamers online.

A lot has been said about the irreverent first person shooter, Bulletstorm, and frankly, as a foreword – it does not deserve the massive attention it has been getting, from critiques of the scatological language and the over-the-top violence, to praise for having reinvented the genre and satirized the plethora of pseudo-realistic military shooters out there.

However, the on-rails never-out-of-ammo pedal-to-the-metal express train of a game is undoubtedly fun and certainly is worthy of a play-through. It holds something for anyone who ever enjoyed a first person shooter, be it the brutal combat and multi-faceted gameplay, the dreamy weapons, and the often lethal but beautiful environments of the planet Stygia. 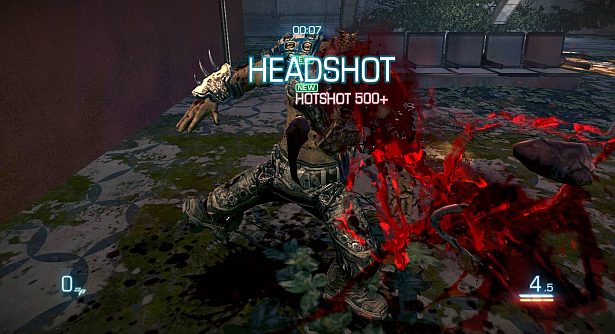 As good as each of these facets may be, the overall effect is far from perfect. There are no awe-inspiring graphics showing off the latest Unreal Engine 3 improvements, it has an uninspiring and uninspired mockery of a storyline, the co-op and enemy AI is crude, and the single-player campaign is surprisingly short, clocking in at five to six hours or nineteen chapters in seven acts.

While Bulletstorm has perhaps already made its mark as one of 2011’s biggest hits, it doesn’t set an archetype for future first person shooters to be inspired by, except maybe for being the first FPS to effectively integrate a comprehensive and inventive ‘Skillshot’ or stylish points system.

Skillshot combinations are actually almost as limitless as Epic Games and People Can Fly want you to believe, with the only thing stopping you from achieving a jaw-dropping number of Skillpoints is your creativity, timing, and situational awareness. Kick a mine into the horde, shoot it, and then pick off heads one by one to get an Environmental Afterburner Headshot combo. Missed the head? Here’s your chance to try for a throat shot (Gag Reflex), or to put your unlucky foe out of his misery after shooting him in the groin (Mercy). Kick him into a river and make him Fish Food. 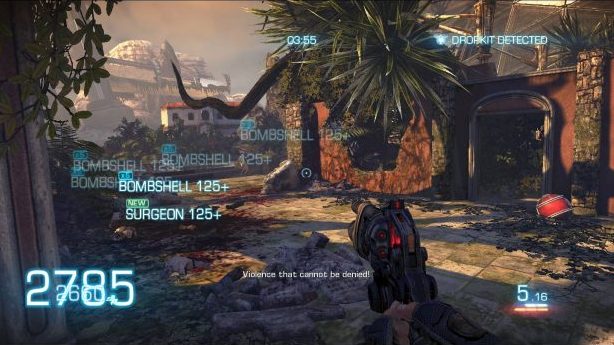 There are more than a hundred types of Skillshots in the game, some weapon specific, other chapter specific, and some, general or environmental. They range from basic to normal to advanced. All that hard work in an otherwise simple point A to point B shooter, gifts you Skillpoints. They buy you weapon upgrades and ammunition, picked up from your local dropkit using the Leash. Your character, Grayson Hunt, picks up a Leash few minutes into the game, which allows you to pull enemies (one at a time) through the air towards you, bringing them closer for more moves like a Bullet-Kick. You can also upgrade the Leash to add the Thumper feature, which when used will send multiple enemies into the air where they stand, allowing you to take your time to indulge in some Trap-Shooting, coupled with some Environmental damage. It remains as the default left hand weapon throughout the game.

Apart from the Leash, the kick and slide (both of which, like the Leash, also send opponents and objects flying, just away from you) are the most interesting gameplay additions to a standard FPS, allowing for a variety of Skillshots and for exciting new battlefield tactics.

The other weapons are the Peacekeeper Carbine (assault rifle, also default), Screamer (high-calibre revolver), Flailgun (explosive bola launcher), Boneduster (four-barrel shotgun), Head Hunter (sniper), Bouncer (explosive cannonball launcher), and the Penetrator (drill bit projectile weapon). You can also pick up an abandoned Chaingun dropped by an enemy, and use it until it runs out of charge. Each weapon can also be upgraded with a limited number of charge shots, allowing you to take out tougher enemies. You can select a maximum of four weapons at a time, with two weapons of your choice apart from the Peacekeeper Carbine and the Leash. Each has its own advantages and Skillshots, and switching to use different weapons on-the-fly during a Skillshot is usually well-rewarded.

The weapons have to be the biggest singular draw of Bulletstorm, presenting some beautiful pixels for you to gawk at throughout the game. Mechanics of weapons like the Penetrator, Flailgun and Bouncer provide exciting ‘Gang Bang’ing possibilities, while the Head Hunter gives you god-like powers – slowing down time and allowing you to steer the bullet to your chosen body part. The Boneduster is a close-range knockout punch, and the Screamer is a deeply satisfying one hit wonder, while the default Peacekeeper Carbine is just as potent, but demands a lot more from your accuracy.

[RELATED_ARTICLE]Apart from the Campaign, there are two other game modes in Bulletstorm – Echoes, and Anarchy. Echoes lets players try to get the best score in a single chapter/level run, where time, Skillshots, etc., are totaled to make the player’s score for the level, which get uploaded to global leaderboards. Anarchy mode is when a player and up to three of his/her friends (private mode) or random people online face 20 waves of enemies. Apart from the regular Skillshots, Team Skillshots also feature in this mode. If anyone is killed during a match, the wave will end, and, if sufficient points have not been earned, the same wave will be replayed. Anarchy mode also features the Blood Symphony meter, which when full, results in instantaneous death of multiple enemies (except bosses) if you kick or leash them.

As for the coarse language, we weren’t offended at all, and nor did we flinch. It felt very much a part of the game, however, those of you who blush easily might want to switch mature language off in the game options. Keep your kids away from it though, shooting like a 'surgeon' might not be the best imagery at a formative age.

Verdict: The game’s pre-launch hype about it being a one-of-a-kind shooter is not all hype, sure, but for the storyline to be effectively similar to the very military shooters that Epic Games mocked with Duty Calls, is unseemly hypocrisy, even if some self-mockery was thrown in. However, the joyous barrage of violence that is the Bulletstorm experience is worth a purchase, and neglecting the cliché and abrupt storyline, the addictive Echoes and Anarchy modes are the true selling points of the game, pitting your Skillshot creativity and precision against the hordes of frenzied gamers online.