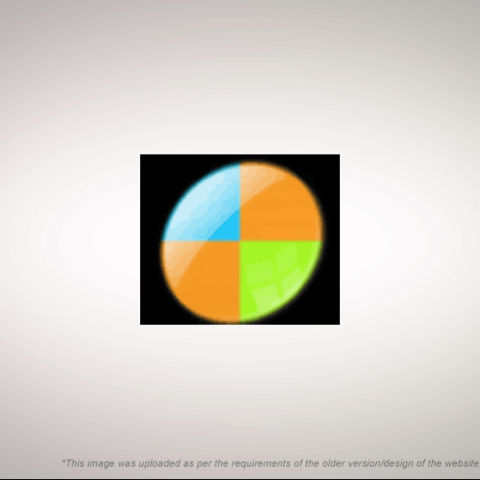 Gladinet is a brilliant application for managing your online storage locations making them easily accessible and manageable, letting you access your data without worrying about where it is stored. The paid version is affordable and adds useful, powerful features.

If you use the internet at all these days, odds are that some of your data will be stored online. Whether it be emails and attachments in GMail, photos in Picasa, documents in Google Docs or file in Box.net. The possibilities of what we can do online are incrementing fast. In just the past few years, we have seen online tools for editing everything from documents and images to videos flourish. In is only natural that over time we will be having a greater amount of our data online.

Gladinet Cloud desktop is an application which lets you access your cloud storage as easily as you would any removable drive, and provides a number of tools which allow for greater control over the data you store online.

With Gladinet Cloud Desktop, one can configure Storage providers -- which would be the online services you use for storing your data -- and map the storage they provide to folders in a virtual drive. These folders will then display the files you have online, and you will be able to upload and download files from your storage provider by simply copying files to and from the virtual folders. 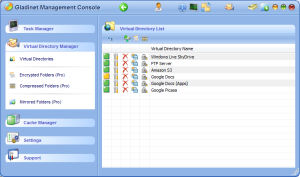 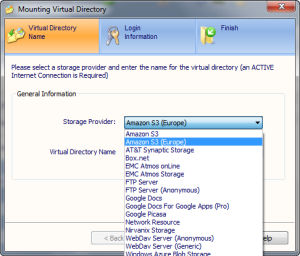 Gladinet Cloud Desktop creates its own virtual drive (by default "Z:" drive) and mounts each storage provider in a virtual

directory under the Gladinet Cloud Desktop drive. So if you have Google Docs, and Picasa enabled as storage providers, you will see a directory "Google Docs" and another for "Picasa" in your Gladinet drive. While this system of having all your online storage services as virtual folders in a drive makes sense, an option to have a separate drive for each storage provider would have been great – although for most people, this will be the desired setting anyway.

While most services – except services such as Amazon S3, Windows Azure, etc – offer an online interface for uploading files, and some such as Google Picasa have their own clients, however using an application such as Gladinet Cloud Desktop has its advantages. The most important advantage being that with Gladinet Cloud Desktop, all your storage locations are accessible from one place. Additionally they are all operated in the same way, by dragging / dropping, or copy / pasting files – which is something people are already familiar with.

Chunking is a feature which is available for some services in Gladinet Cloud Desktop. With chunking, Gladinet will break down your files into small chunks which can each be uploaded in parallel, giving better throughput. Chunking a file can also save bandwidth in case of a upload failure, as only the failed piece will have to be re-uploaded instead of the whole file. However each chunks of each file will be visible as a separate file through the storage service's own interface – or other applications – and will not be automatically merged. While Gladinet will automatically merge these segments while downloading your file, these uploaded files might become unusable directly in other applications.

Another advantage in mounting these online storage services in directories is that they are usable by any application. So you can edit the files directly and Gladinet Cloud Desktop will automatically maintain sync. You can open your Google Docs files in a Microsoft Word, OpenOffice or any offline application, and save directly to the service.

This also has a major disadvantage. Some of the unique features of each storage provider are lost. Depending on how you use the service and what you use it for, this may or may not be a big disadvantage. For example, while you can drag-drop images to your Google Picasa storage, there is no clear way of adding captions or other meta-data which might be available to you from the Google Picasa image manager application. 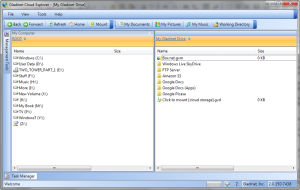 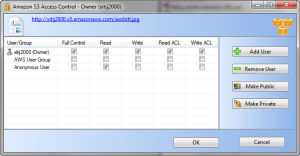 Most of the features mentioned till now are available in the free “Standard” version. So if you just want a way to access your online storage from Windows Explorer, the free version should suffice. However the Professional version adds quite a few features which will be useful for those who want to use Gladinet Cloud Desktop as a file synchronization or online backup solution. The Professional version adds features such as file compression, encryption, folder mirroring, and of course a powerful backup system.

For better bandwidth and storage efficiency, Gladinet Cloud Desktop supports file compression for uploaded files. You can specify the folders which need to be compressed in Gladinet Cloud Desktop, and it will automatically compress any files uploaded to that directory. You can even specify which files extensions need to be compressed, for maximum efficiency. Unfortunately, these compressed files don't use a standard format; while they are visible in the online interface, or using other applications, they can only be decompressed (automatically) using Gladinet. This provides transparent compression of your files and saving in bandwidth and storage, but at the cost of compatibility.

The encryption system in Gladinet Cloud Desktop is a little lacking, especially in flexibility. There is no choice in selecting the encryption algorithm, and while AES-128 is secure and should meet everyone's needs, a choice would have been appreciated. This is not as big a shortcoming as the fact that Gladinet Cloud Desktop only allows you to set one password for encrypting files in all your for. While this makes the feature simple to use, it also makes it less flexible. One might prefer to use a different encryption password for different folders, however setting a different password on a per-folder basis is not possible. However, this shortcoming can be easily overcome by performing the encryption manually.

Gladinet Cloud Desktop's folder mirroring feature, is another nice feature which makes is a suitable replacement for an application like DropBox. Folders you select to mirror will automatically be downloaded to the local cache, so that they are readily available even when you are offline. Files in these folders will be periodically be compared to their online counterparts, and Gladinet Cloud Desktop will maintain sync. Due to the flexible nature of Gladinet Cloud Desktop though, this feature is even more powerful, as it will work with any storage service it supports. While with DropBox you are limited to using their own service which gives a limited storage space of 2GB for free, with Gladinet Cloud Desktop, you can have multiple free options including Microsoft's Windows Live SkyDrive which gives as much as 25GB free storage with a 50MB file size limit.

One of the most important features of the Professional version is of course, Backup. Gladinet Cloud Desktop has some powerful backup features which allow you to automatically back up files from your computer to one or more storage services. You can configure a single backup task to handle uploading from multiple source locations to multiple destination location on multiple services. 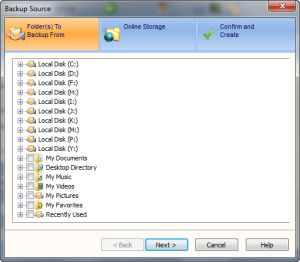 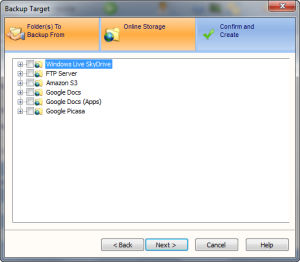 Backing up is a simple matter of setting up the source folders and one or more destinations. It then creates a backp job whcih is run periodically.

Gladinet Cloud Desktop also includes a special feature just for backing up the documents you have in Google Docs. You can have the application automatically transfer all documents in your Google Docs account to any other service, even another Google Docs account! This is can quite useful for transitioning from your Google Docs to Google Apps account or vice-versa. This backup type can either operate on all your files, or on a “DropBox” folder, such that any documents or files added to that folder would automatically be transferred to your backup storage. 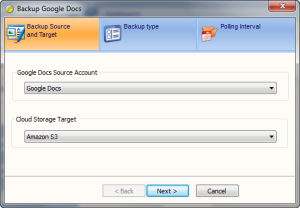 Gladinet Cloud Desktop can perform an indexing of all your files after which you will be able to back up by file type. This way you can upload only your documents to Google Docs and your pictures to Picasa.

Backup works as you might expect. You can create a backup task which will run at regular intervals, monitoring your source folders for changes, and uploading any changed files to the target storage servers. Obviously Gladinet Cloud Desktop will not delete a file from your remote storage if you remove it from your local storage. This is different from mirroring in that it is one-way, not a complete sync.

Gladinet is a powerful application which offers some of the best features even in its free version. Having all your online storage available from one place in a mounted drive is the most important aspect of this application, and it is available in the free versions as well, along with the dedicated Cloud storage browsing and management application. The professional version comes at an affordable price and brings features which are worth paying for. However it had a few kinks in the way some of its features such as compression and encryption are implemented which fail to make this a perfect solution. Hopefully these will be removed in future versions of the software. Overall it is a worthy product, which is attractive in both its free and paid versions. 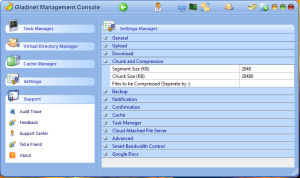 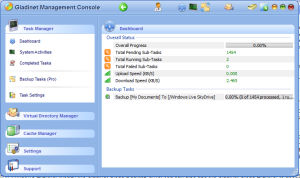 Detailed information about each running task is available.