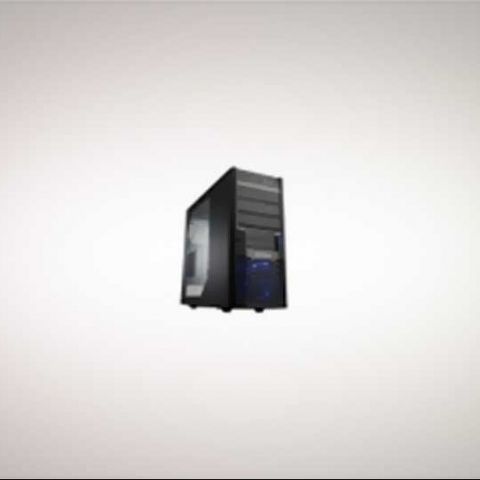 At Rs. 3,500 the Elite 430 offers very good value for money, and addresses the needs of mid range gamers rather well. A very nice option for anyone looking at a good, value oriented chassis.

For those who do not remember, around two years back, we featured CoolerMaster’s Elite 330 in a magazine review. Not a path breaking chassis by any means, but one that marked an important point in history for CM – for the first time, there was something for the Indian masses that was cheap, but didn’t feel cheap, and that too, from a larger, more renowned brand. As a company, they’re better known for catering to gamers, overclockers and enthusiast users – typically those with deeper pockets, and people who, subsequently, demand more in terms of features and performance. Therefore, an entry-level chassis was much more than a pleasant surprise – it was sorely needed, covering a gaping hole in their repertoire. Fast-forward a bit, through several generations of products using the “Elite” moniker, and we have new one – the Elite 430 – built on the same value-oriented lines as the Elite 330, but catering to a more upmarket audience.

The CM Elite 430 from a frontal perspective. Note the mesh in front. It promotes better airflow while allowing the blue LED fan to strut its stuff. Also note the front-mounted I/O ports

To be honest, this was no surprise, since we spoke to CM during this years Computex in Taipei and they were talking about a slew of new releases. In fact, the CM 690 – their bestseller in India, has also gotten a makeover, in the form of the CM 690 II, which we’ve already reviewed here.

This time round CM gets a little more adventurous – they’re actually (gasp) promoting the Elite 430 as a gaming cabinet. An initial eye-over tells us that the 430 is definitely closer to that making good on that claim than the Elite 330 ever was. But housing a gaming rig in what still is, a mid-tower design and a small chassis on the whole? Surely they jest…after all, there’s a certain amount of breathing space two GTX 480 graphic cards and an overclocked Core i7 980 Extreme require that is non-negotiable. Well, be that as it may, we’re pretty sure somebody shelling out upward of 90 grand on a gaming rig wouldn’t mind blowing 10 grand on a cabinet – and this is much cheaper. Therefore, the Elite 430 is aimed squarely at the gamer on a budget…someone who doesn’t have a lot of money to blow on a configuration, and wants the best possible value for money. Affordable gaming chassis’ are a rare breed, and CM is hoping to cash in on this. Therefore, we assume the audience of the Elite 430 to be gamers having sunk up to 50,000 bucks on a gaming PC.

A black matte-powder coated body will always attract attention, the glossy look is totally misplaced for chassis’ and the 430 avoids this, managing to convey a suave, laid back look, without being too formal. This powder-coated goodness extends to the inside of the cabinet, where even the plastics are black. The build of the entire cabinet is good, with decent gauge of metal being used, except for the side panels that have a fair bit of flex, understandably to keep the weight down.

The front of the cabinet is basic, with a few contours that manage to keep things interesting. A top that slops forward with a ridge on either side, housing all the buttons adds a bit of style, but its minimalistic. Between these ridges, on either side are two removable mesh plates corresponding to a couple of 3.5-inch bays. Below this is the CM moniker, and a plastic grille that conceals a mesh grille and under that, a 120mm, blue-LED fan. Mounting holes for a larger, 140mm fan are also provided. Air filters are provided for the 3.5 and 5.25-inch bays, but weirdly, none for the fan, that practically will pull in much more air, and therefore dust.

The all-black powder coating looks nice, while a tool-less design for the HDDs and optical drives is a welcome plus. Note the cutaway in the motherboard backplate near the CPU region and the nubs that secure the power supply

The side of the cabinet has a plexiglass cutout. Transparent side panels are the rage, especially for souped-up gaming rigs, and CM hasn’t missed the demand of the times. Slit-like perforations in the plexiglass panel, along with a mounting bracket for a 120mm fan means cooling isn’t sacrificed. The rear mesh has mounting holes for a single 120, 92 or 80mm fan. The motherboard tray has a large cutaway section coinciding with the CPU portion allowing access to the underneath of the motherboard through the side panel on the right – especially ergonomic for those using aftermarket coolers with back plates that necessitate removal of the motherboard. The top is meshed, and there are adjacent mounting holes for two 120mm fans, but frankly, we see very little vertical headroom for placing them, fans do fit – but only just, and definitely not if you have a tower-type cooler that extends over the boundaries of the motherboard’s dimensions. In any case if you do fit a couple of fans, the mesh is a bit loose, and will impede the fan blades.

Hard drive and optical bays are vertically aligned and plastic clips have been provided to ensure you get to boast - “it’s tool-less”. Although the mechanism behind these clips is very simple, it works pretty well. The metal protrusions for holding a hard drive are a bit thinner than the mounting holes in the drive, leading to a wee bit play – nothing serious though. The optical drive bay has locks for only one side although this isn’t much of a problem either.

CM advertises the Elite 430 as supporting a Radeon HD 5970, technically it does, but only just, with no room for an HDD in the same horizontal space. Needless to say, we wouldn’t recommend this case to 5970 users. It’s a huge, very hot running graphic card; the analogy of a Ferrari engine housed in a Civic’s body comes to mind. The cabinet is deep, but neither would we recommend this to GTX 480 users – there’s too little room to play with. The SMPS mounts on the bottom, a trend we’ve seen quite a bit of in recent times. A couple of plastic nubs on the bottom will keep your power supply from getting scratched, although the metal clips on the sides to securely hold the PSU will not. Longer PSUs can be accommodated, but at the expense of rendering the bottom fan-mount useless. CM has taken care to do away with sharp edges, although if you really try, you can find a couple.

As expected, thermal performance is decent. We used a Core 2 Quad Q9650 and a GTX 460 graphic card – a fairly mid-range configuration. When compared to a Lian-Li A71F, which was the only other chassis we had on hand, obviously, the Elite 430 isn’t as hot – which means it’s hotter literally, by four degrees each on the CPU and GPU. This equates to a percentile delta of 11 per cent and 6 per cent respectively. Obviously, the higher the configuration goes, the bigger the difference will be, as the A71F is a full tower chassis and has more fans and more space inside. One advantage of a smaller cabinet is, that the fans are a lot closer to the components and thus hot parts get more air on them. However, with a really powerful set of components, causing a general build up of heat inside, this difference is typically mitigated.

As advertised, two Radeon HD 5970 graphic cards do fit, but as you can see its a squeeze, and getting hard drives into the aligned bays is nigh impossible. Also note how the CPU cooler impedes installation of any fans on the top of the cabinet

The Elite 430 is not recommended for SLI and Crossfire setups that feature higher-end cards, such as the Radeon HD 5850 and NVIDIA GTX 465 and above. Not only would you get a lot more heat, components will get extremely cramped, and this will result in further heat generation as heat gets trapped, creating silicon-damaging ‘hot zones’. Also, sometimes, when fans come are placed improperly and close to one another, the airflow criss-crosses, and the resulting turbulence prevents heat from whisked away properly.

If the CM Elite 430 be priced above Rs. 5,000, we’d say it skip it and look for something else. After all, you can get a full tower for the same price and that will have more room to work with, and arguably better cooling. The Elite 430 isn’t for the uber rig, neither is it for someone looking for a multi-GPU setup, unless you’re talking of two entry-level cards. The Elite 430 retails at Rs. 3,500, that we feel is highly competitive. CM has nailed competitors on the head with the price. It’s a good chassis – definitely a cut above cheaper offerings from smaller vendors. But the slightly elevated pricing is easily offset with the overall build, look and performance. It’s also a pretty deep chassis, meaning it can accommodate a longer graphic card easily. The MOP (market operating price) given to us by CM is Rs. 2,700. If you can get it at this price, it’s a steal.