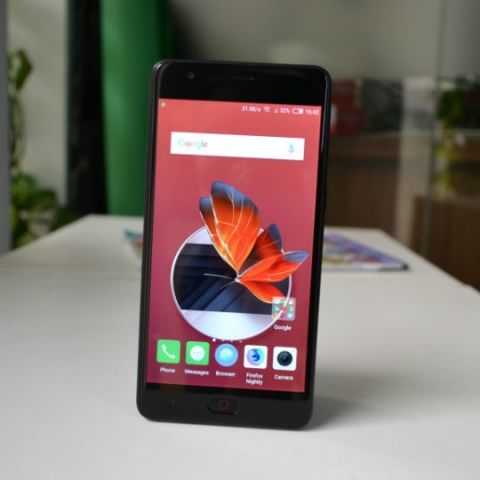 The Nubia M2 Play has its moments, but it’s not a value for money purchase overall. It lacks in the camera department and performance is passable at best. There are better phones available in the sub-10k segment.

Nubia M2 Play is the latest addition to the company’s portfolio, replacing the Nubia M2 Lite (review). The smartphone is powered by a Snapdragon 435 chipset and comes with 3GB of RAM. It iterates some of the same mistakes made by its predecessors, but has its moments as well.

Nubia’s candy bar design looks good and even though the device is targeted at budget buyers, it has a premium feel. The Nubia M2 Play sports a unibody metallic design and feels quite sturdy. It features rounded edges, which makes holding the device during longer gaming sessions comfortable.

However, the polished finish on the smartphone makes it a bit slippery and prone to drops if you are not diligent while using it. A large display, combined with the polished back also interferes with the overall ergonomics of the device, which aren’t great. 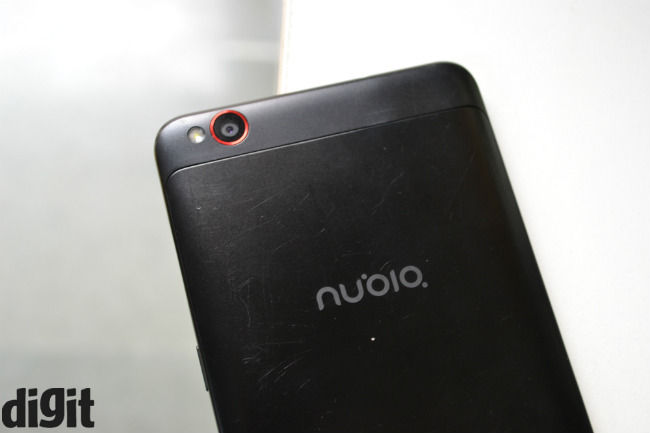 The fingerprint scanner is integrated with the home button on the front and works quite well. The capacitive back and settings keys appear as two red dots alongside the home button. The one on the left of the home button is meant to open settings within apps, which is an aberration from the usual recents key placement. 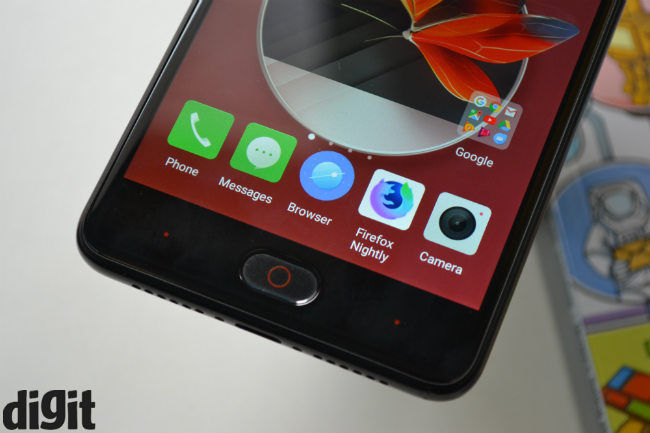 The rear camera rests on the top left of the device on the back, with an LED flash next to it. The camera has a red ring around it, which adds to the overall looks. The grey Nubia logo is placed below the camera system. The power button is on the right edge of the device, whereas the volume keys are placed on the left. The headphone jack sits on the top and the micro-usb charging port and speaker grilles are placed at the bottom. It is worth noting that only one (the one on the right) of two speaker grilles plays audio, whereas the other one is only for aesthetics. 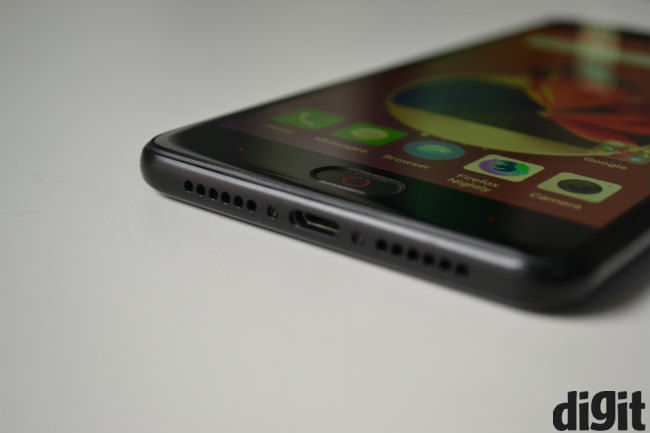 The Nubia M2 Play sports a 5.5-inch TFT display with a 720p HD resolution. The display leans more towards warmer tones and one can observe a slight colour shift while viewing the smartphone from different angles. The display feels dim and luminance scores came to a low 293 lux on our test. We struggled with the display under direct sunlight, even with the brightness set to maximum. 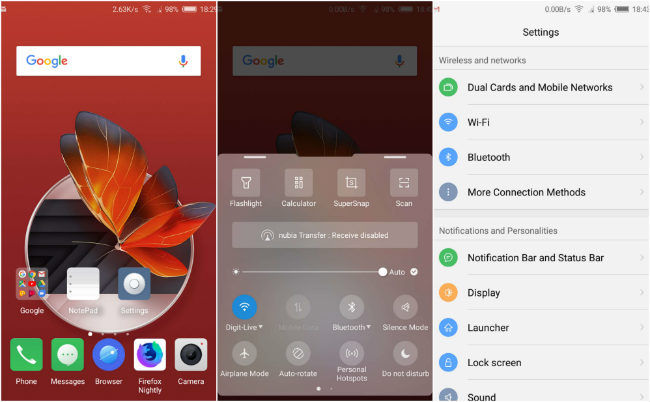 The smartphone runs on Nubia UI 5.0 on top of Android 7.1.1 Nougat and its UI takes some getting used to. While you can get used to this, there are some stark changes from Android. One of them of course is the placement of a capacitive settings key instead of recents. Also, the quick settings are accessed via a swipe from the bottom, which most users won’t be used to at first.

The main issue with the software is the number of unnecessary permissions even basic apps ask. For example, the calculator app needs access to Phone and the Gallery app needs access to contacts and location. Most of these are unwanted, but Nubia has made them essential permissions, meaning you cannot use an app without granting access. This is a big concern, which the company needs to address. 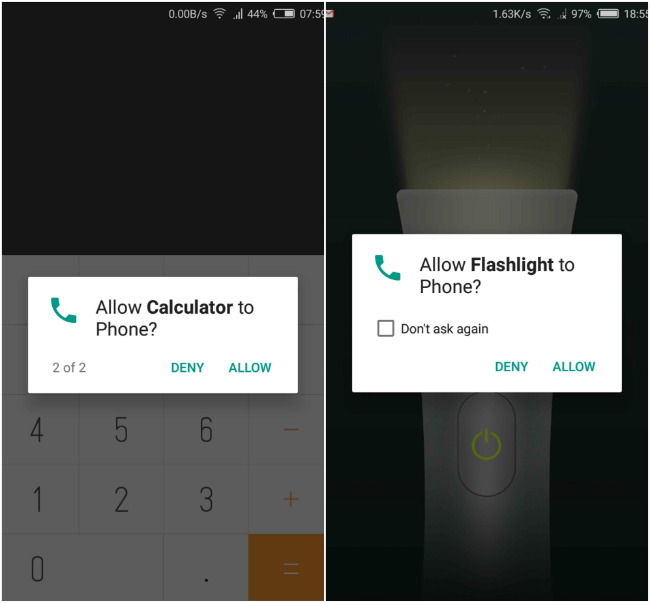 The device also features a split screen option that allows two apps to run simultaneously, which works pretty well. It is activated by swiping up from the bottom center of the display. You can watch YouTube videos while surfing the web and so on. The UI has no app drawer, which is normal in smartphones today.

The Nubia M2 Play is powered by a 1.4Ghz Qualcomm Snapdragon 435 Octa-core chipset, which we’ve seen on many budget devices this year. We experienced long loading times and slight lags while playing Asphalt 8 and NFS No Limits. 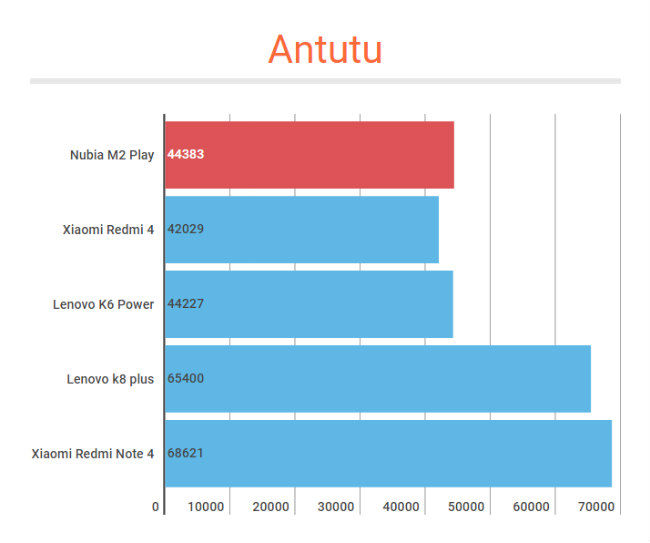 The device gets a bit warm after 30 minutes of continuous gaming, but that’s not abnormal in Delhi’s current temperatures. The smartphone is backed by 3GB of RAM, which is a norm for smartphones in its category. Navigating the UI feels slow, with resource intensive apps taking more than a second to launch. You’ll probably not use Adobe Lightroom on this phone, but you’ll still feel the sloth often. 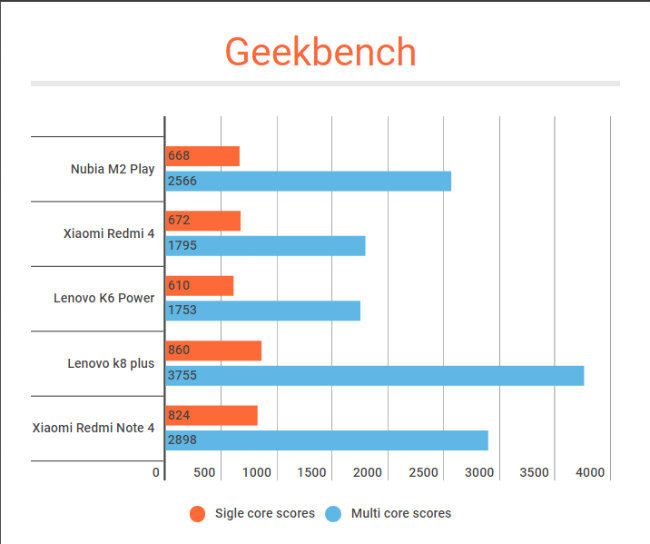 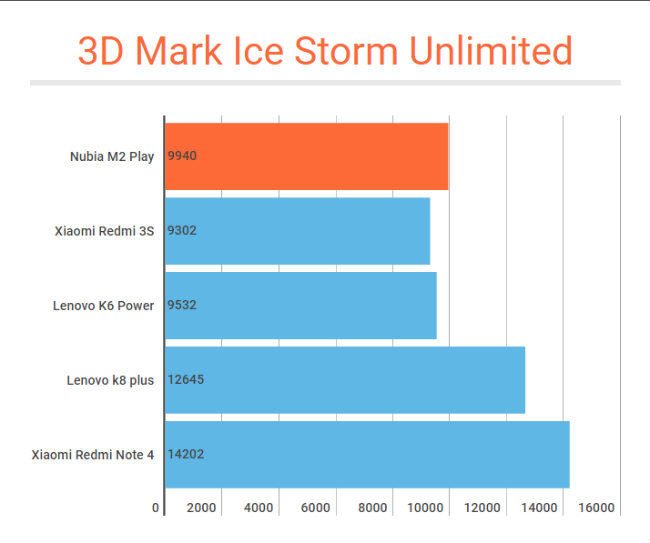 Overall, the Nubia M2 Play is not the best performer you will find in this price range. It’ll do the job for day-to-day tasks, but being an Android phone, it is bound to slow down. Since it starts off slow, this will perhaps happen faster on this device.

Nubia has always highlighted cameras on its devices and the M2 Play is no exception. It is equipped with a 13MP rear camera with a f/2.2 aperture lens. However, in low lighting conditions, it is sub-par at best. Photos captured in dim or low lighting have a lot of noise and lack sharpness. Photos taken in normal daylight lack sharpness too and show some visible noise. The camera is also slow to focus, which means you will often end up with blurry photos when shooting in a hurry.  We also observed colour noise, which is not expected from any smartphone camera today. 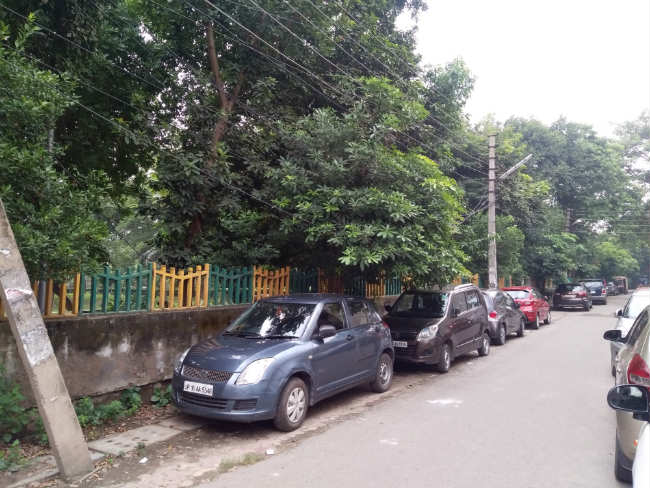 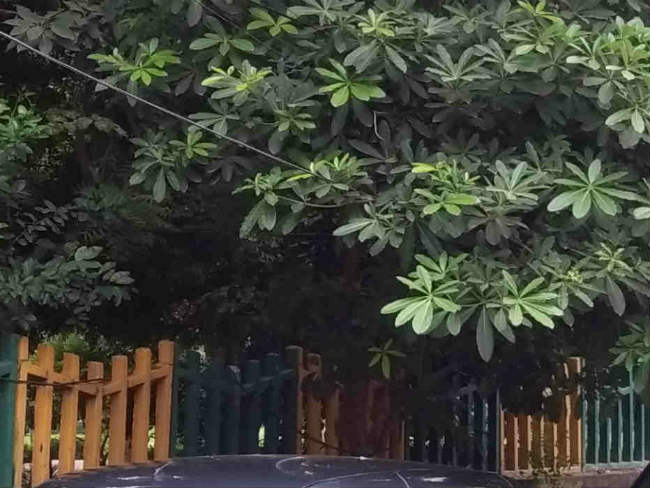 Overall, you can get some usable shots in well lit conditions, but low light photos are often unusable and the camera as a whole isn’t the best.

The same can be said for the 5MP front facing camera, which takes decent photos under well lit environments. But as soon as it encounters low light conditions, images show undersaturated colors and much more visible noise. Nubia seems to have compromised heavily with the M2 Play’s camera to cut costs. 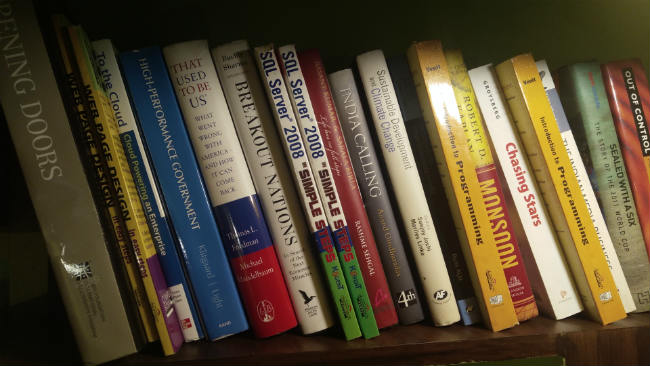 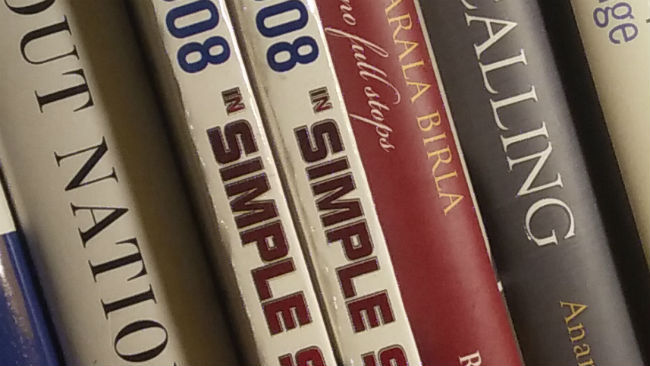 The in-built camera app provides some additional features under the “Camera Family” tab. The options include slow motion, time lapse and many more video modes that are fun to try out. 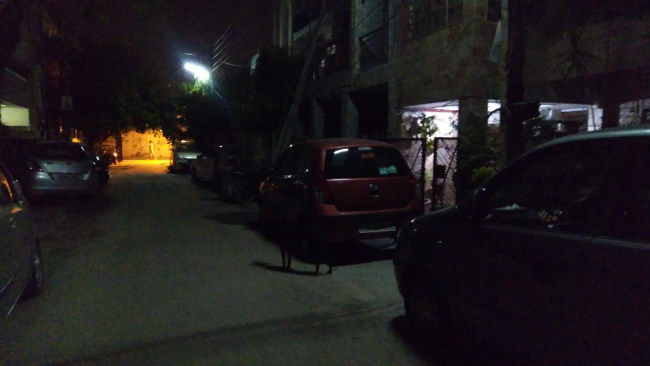 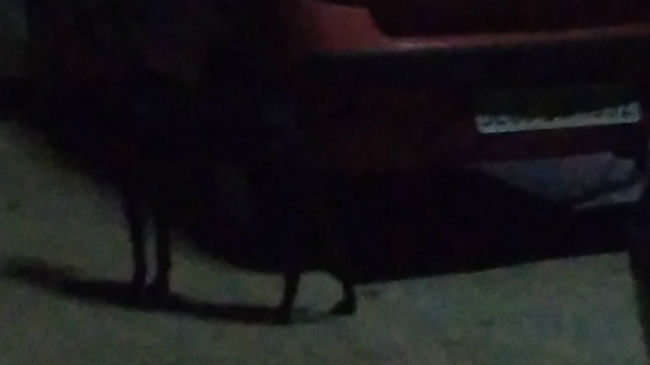 It drops about 7% battery (on idle) overnight, which isn’t expected off phones with Android Nougat. Overall though, the battery on the phone performs is reasonable and will power your device for about 10 hours on a single charge.

The USP of the Nubia M2 Play is its camera, which to be honest, is not that great. Nubia has emphasised on the design, which is reflected in its stylish build. Apps asking for unnecessary permissions is a red flag, which the company needs to address. Overall, the Nubia M2 Play is a good looking smartphone, but it doesn’t bring the best value for money in the budget range.