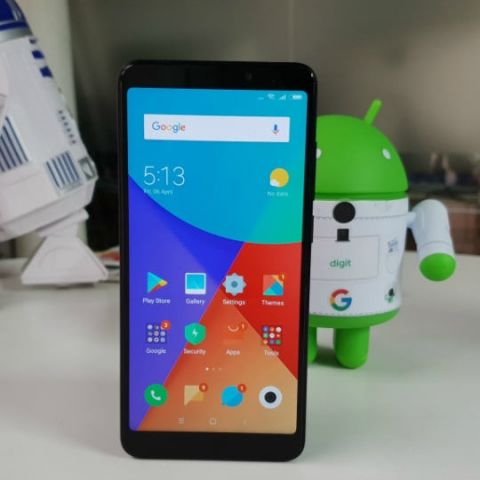 The Redmi 5 is definitely one of the more powerful and power-efficient offerings in the budget segment but the novelty of the phone is marred by Xiaomi itself thanks to the more powerful Redmi Note 5 at around the same price. The base variant of the phone isn’t powerful enough to match the requirements of an average power user while the top variant is only Rs 1,000 less than the top variant of the Redmi Note 5. Independently, the Redmi 5 is a decent offering that seals Xiaomi’s grasp of the low-end smartphone segment. The company hopes to cushion itself with the Redmi 5 should the Redmi Note 5 be passed over for the more powerful Redmi Note 5 Pro. It also makes for more choices for the consumer, together with more confusion of course. The biggest deterrent to buying Xiaomi devices has been its flash-sale model, but Redmi 5 will be on an open sale on Amazon, putting that concern to rest.

Xiaomi’s Redmi lineup of phones have been notorious at making mid-range phones look like overpriced pieces of hardware. Ever since its launch in India, the Redmi series has brought mid-tier features down to the budget segment, giving other budget phone makers a run for their money. Noted for its superior build quality and a consistent set of well-loved features, the Redmi lineup is mostly the reason Xiaomi is enjoying the numero uno position in the Indian smartphone market.

Enter the Xiaomi Redmi 5, the successor to the Redmi 4 which was one of the top-selling phones in India last year. The Redmi 5 came quickly after the launch of the mid-range Redmi Note 5 and the Redmi Note 5 Pro. With a price tag starting at Rs 7,999 and going all the way to Rs 10,999 the Redmi 5 is kind of a confusing product. The cheapest variant is difficult to recommend because of the barebones hardware while the top-most variant is competing head-to-head with the base variant of the Redmi Note 5.

Confusing pricing aside, does the Redmi 5 tick all the boxes in the budget phone segment? More importantly, does it make sense to buy this over the Redmi Note 5? We find out. 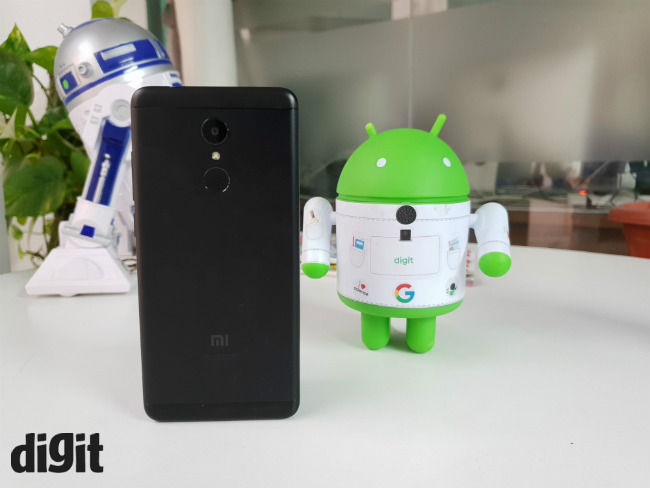 The Xiaomi Redmi 5 is a conscious move away from metal unibody designs. As seen on the Redmi Note 5, the Redmi 5 is also made out of plastic where a polycarbonate frame holds the display and the rear metal plate. The top and bottom are also made out of plastic which allows adequate signal reception. Despite that, Xiaomi has etched the antenna lines on the body, perhaps to retain the metal design philosophy of its predecessors. The camera is placed centrally at the back, with the LED flash and the fingerprint sensor right below. We received the black colour variant for review, which is the neutral choice to go for, but if you are looking to experiment, there’s a suave Lake Blue variant also on offer.

The phone also happens to be the first Xiaomi phone under Rs 10,000 to sport the trendy 18:9 display aspect ratio. While this does make for modern looks, it doesn’t necessarily mean bezel-less. The Redmi 5 has a lot of spare space both on the top and bottom while the sides have a distinct black, but slim border around the display. Nevertheless, the curved corners makes the phone feel nice to hold and easy to grip. Down below are the speaker grilles symmetrically placed while on top, you get the 3.5mm headphone jack and the reliable IR blaster.

There’s really nothing to complain about the build quality of the phone save for the fact that it still uses the older micro-USB port and a hybrid SIM slot. Micro-USB is on its way out and it would have been good to make the phone future-proof with a USB-Type C port. A hybrid SIM slot means you can either use a second nano-SIM or a microSD card to expand storage. In the budget segment where the buyer is looking to maximise the value for money, this crucial compromise could be a deal-breaker. 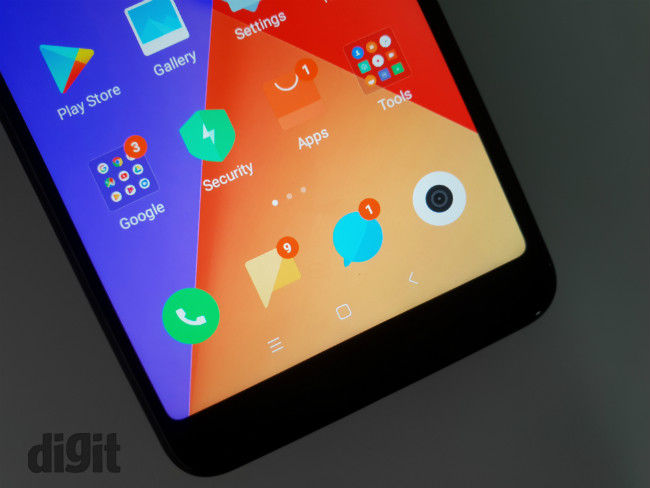 The Redmi 5 keeps up with changing times with the in-vogue 18:9 display. It sport a 5.7-inch HD+ (720x1440 pixels) IPS LCD panel which looks decent considering the price it is offered at. The taller aspect ratio gives more screen real estate to work with, but it doesn’t necessarily make the phone compact, as it should be the case because of the extra bezels. 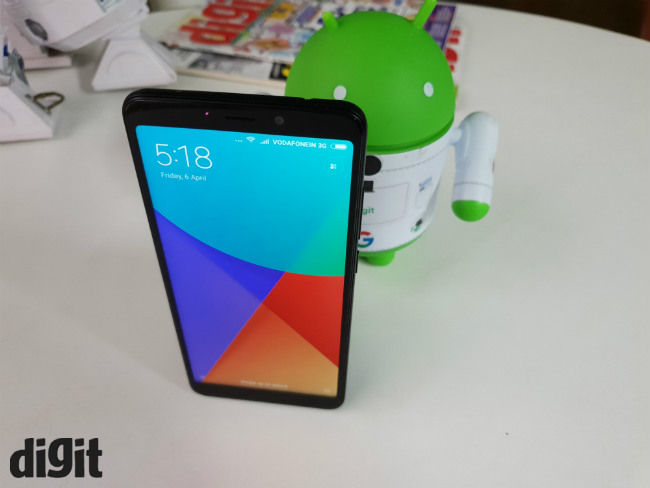 The 720p resolution makes for a decent 282ppi pixel density while the IPS LCD panel means the viewing angles are good enough. The display is just bright enough to feel pleasant when used indoors, but it’s not very legible under direct sunlight. Xiaomi does offer an Adaptive Display option which tweaks the colour temperature and contrast based on ambient light to maintain consistency, but its effectiveness is hit-or-miss at best. There’s also a Standard Mode that dials down the brightness but is more colour accurate. 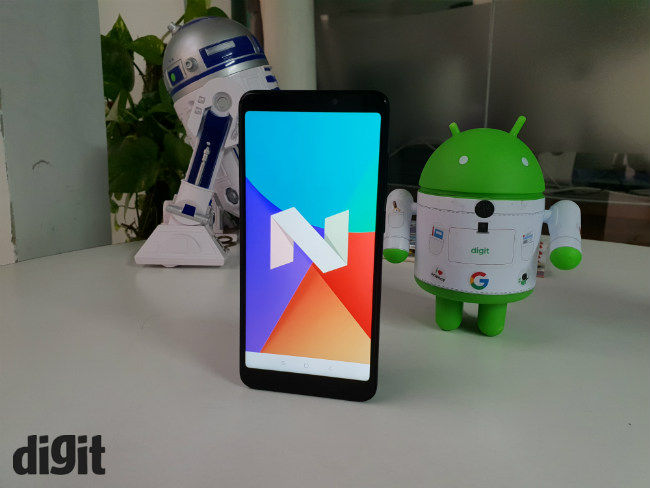 The Redmi 5 runs on the latest MIUI 9 interface based on Android 7.1.2 Nougat. Yes, Xiaomi is still using an older Android version but that doesn’t mean the launcher skips on new features. You do the get the expected split-screen support (no picture-in-picture mode though) and other Nougat-centric features. But apart from that, there are a lot of tiny, but important additions that make using MIUI a productivity-booster. I particularly like the OTP detection in SMSes and the ‘Second Space’ option that allows dual instances of apps like WhatsApp and Facebook Messenger. 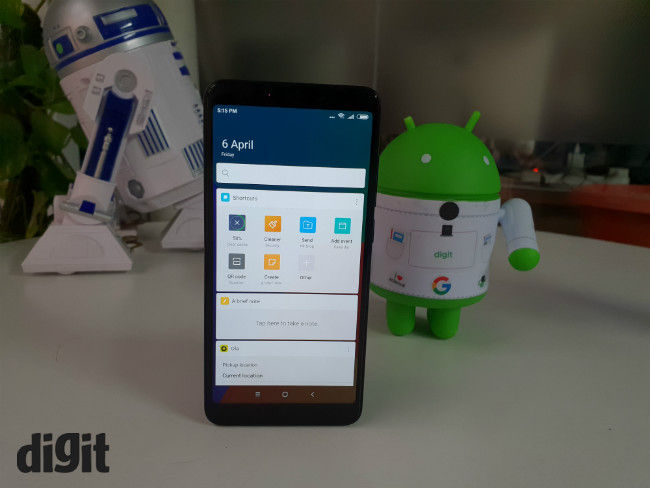 Having said that, MIUI is distinctly different from the stock Android experience. It’s closer to the iOS layout than Android’s. The apps are all dumped on the home screen and after a few months of use, it does feel cluttered. There’s a content space when you swipe left from the homescreen which houses the smart app launcher that presents relevant shortcuts based on your location and activity, a note-taker, and widgets for cricket scores, calendar, and the likes.

What’s impressive is that despite a launcher that’s loaded with features, the hardware under the hood is tuned enough to make the phone function without much of a hitch. You get an octa-core Qualcomm Snapdragon 450 chipset underneath which is akin to the architecture of the Snapdragon 625, having been built on the same 14nm manufacturing process. Even more impressive is the fact that Xiaomi has managed to introduce the chipset to a phone under Rs 10,000. Even though it was pitched as an entry-level chipset, the Snapdragon 450 powered the more expensive Vivo V7 and the V7+ last year.  The eight cortex A53 cores are clocked at a max clock speed of 1.8GHz which is commendable for a budget phone. The phone could handle the newly launched PlayersUnknown Battlefields with ease, albeit under low graphics settings, but there was hardly any lag and I even managed to get a ‘Chicken Dinner’ playing on it.

Benchmark results will show the Redmi 5 is clearly faster than its predecessor as well as other Snapdragon 430-powered phones. It’s multi-core performance is almost as good as the Mi A1 which was one of the top performing phone last year.

The Redmi 5 is offered in three RAM variants — 2GB, 3GB and 4GB. The unit we received had 4GB of RAM and 64GB of storage. Ideally, this is the option we would recommend as the 2GB RAM and 16GB storage variant seems too underpowered to get any serious work done and the 3GB/32GB variant sits somewhere in between. Weirdly enough, the 3GB/32GB variant of the Redmi Note 5 retails for Rs 9,999, which is more feature-packed than the Redmi 5. 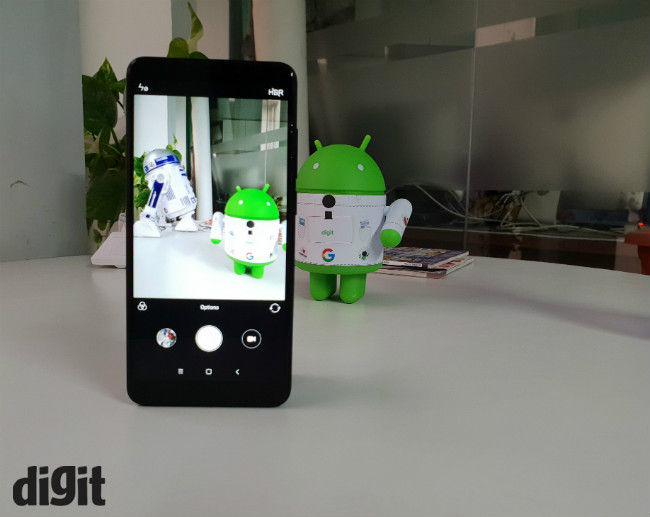 The Xiaomi Redmi 5 has almost the same camera hardware as the Redmi Note 5, which is a great thing for the budget segment. It is kind of expected as the Redmi Note 5 in India is the rebranded Redmi 5 Plus from China. Both sport a 12-megapixel rear shooter with f/2.2 aperture and 1.25um pixels and phase-detection AF.

The camera on the Xiaomi Redmi 5 was disappointing to say the least. While every aspect of the phone has improved over its predecessor, the camera has lagged behind. The f/2.2 aperture results in darker shots with aggressive noise reduction. It isn’t really the worst we have seen on a budget phone, but knowing how Xiaomi likes to push the boundaries, the camera leaves a lot to be desired. 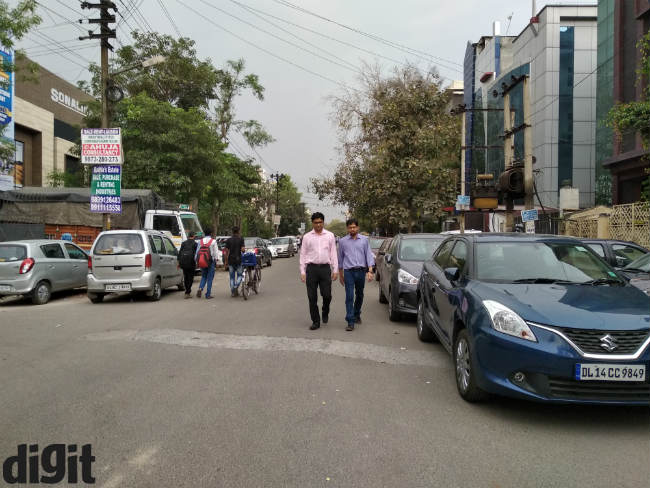 Daytime shots are decent enough to be social-media worthy. They’re low on contrast and the colours aren’t at all accurat, but pleasant nonetheless. There’s also a slight shutter lag even when there’s enough light and HDR isn’t turned on by default. The HDR mode is commendable in scourging details from the shadows and if not for the longer shutter time, I would recommend using it all the time. 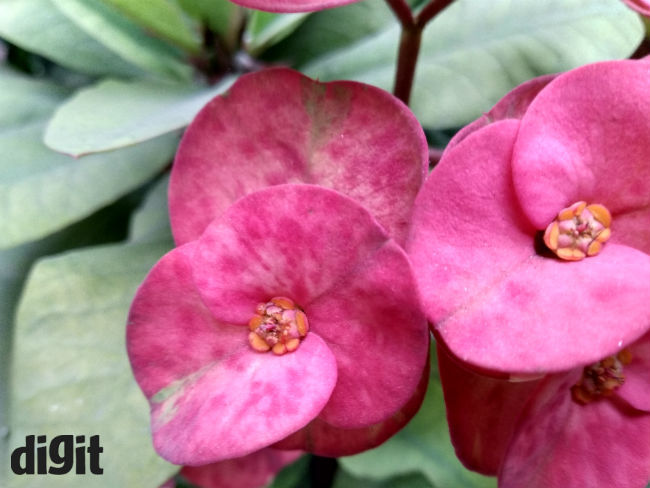 The camera is quite capable of taking macro shots which are detail rich. It does take some time to focus properly but when it does, you will be quite pleased with the results. There’s no bokeh mode and a small f/2.2 aperture hardly allows any background separation. 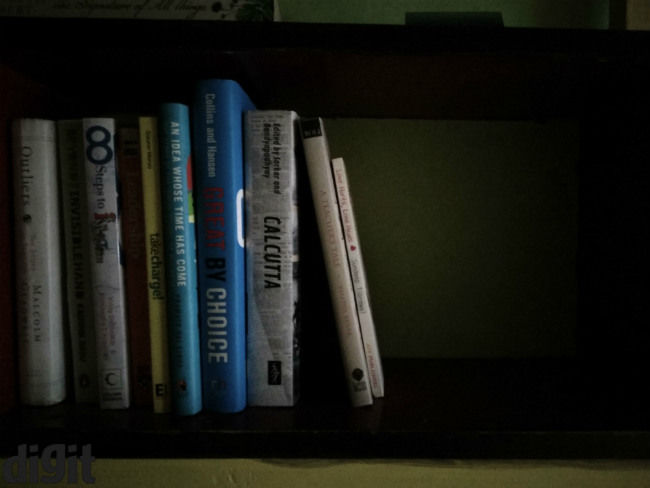 Smaller aperture means less light and that almost sums up the phone’s low-light capability. Having said that, the camera algorithm does reduce some of the noise, but the overall result is disappointing. The camera fails to capture the details and contrast is hardly there. 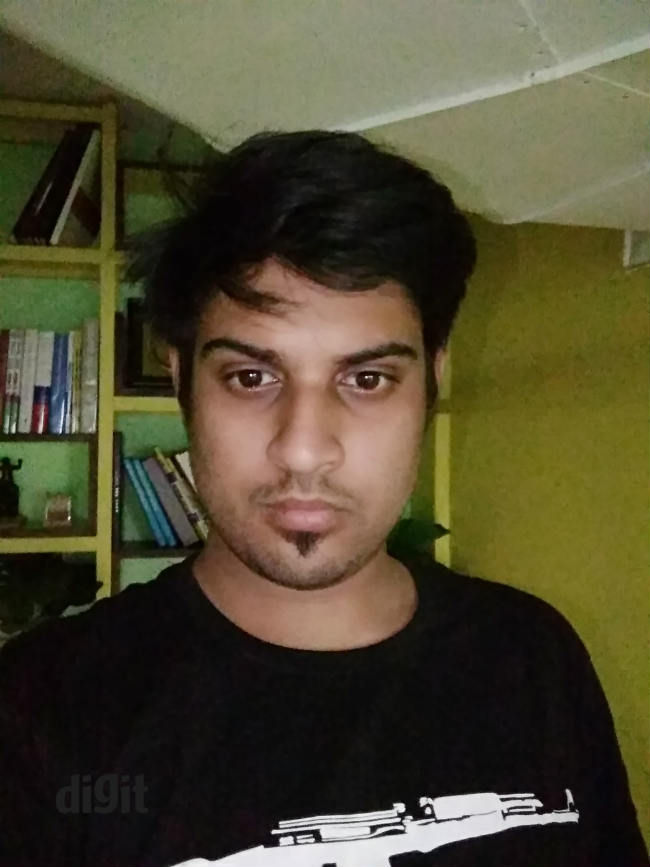 You get a 5-megapixel front camera with in-built beauty modes and an LED flash. It takes decent selfies with high contrast and overexposed backgrounds. The LED flash doesn’t really add to the quality though. You are better off keeping it off. 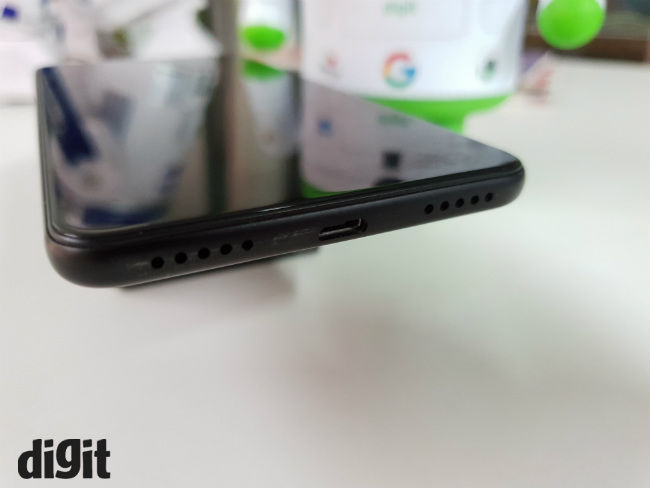 While the older Redmi 4 came with a whopping 4,000mAh battery, Xiaomi has shaved off the battery capacity in the Redmi 5 by providing a 3,300mAh battery. The company hopes that the power-efficient chipset will offset the difference, which it does to some extent, but the battery life is less than its predecessor. Playing a graphically intensive game like PubG drains the battery faster but occasional social media  browsing, taking pictures and watching videos will easily last the phone over a day and then some more.

Xiaomi doesn’t bundle a fast charger with the phone and it takes around 3 hours to charge the device to its full capacity.

The Xiaomi Redmi 5 is a welcome offering, but a confusing one at the same. It seems like Xiaomi is hedging its bets should the Redmi Note 5 fail to make an impression in the face of its more powerful elder sibling. The Redmi 5 is well-built but fails to tick all the boxes for a phone under the budget segment. With a powerful, but entry-level processor, it does push the boundaries as far as raw performance is concerned, but leaves a lot to be desired in the camera segment.