Vodafone 555 Blue - Facebook will never be too far away Review 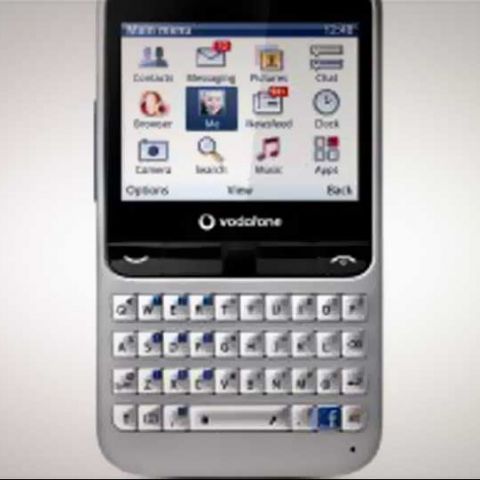 The Vodafone Blue is aimed at a very specific audience – the ‘social networking addicted' kids! This surely isn't a smartphone, but does three things very well – calls, messages and Facebook. Basic looks and build quality, and the hardware specs aren’t something exciting. Pretty much a run of the mill feature set for a price of Rs. 4,950, but this one might just be what you buy to access Facebook on the cheap.

BUY Vodafone 555 Blue - Facebook will never be too far away

Facebook integration seems to be the name of the game, at least as far as integrating social networks with smartphones is concerned. We reviewed the HTC ChaCha sometime back (http://goo.gl/4Cj8r), and that was the first indication of how deeply Facebook can be integrated with the smartphone. However, we had pointed out that the Facebook button on the ChaCha doesn’t do too much more than quick posting. Note that at no point of time are we comparing the two phones, because they fall in very different price brackets. However, we are just looking at the FB integration part of it.

Look & Feel
From afar, the Vodafone Blue does have an uncanny resemblance to the HTC ChaCha. However, that theory is pretty much dispelled the moment you hold the phone. The Blue doesn’t have that banana curve design, and the keypad layout is also a lot different from the HTC phone. The 2.4-inch display takes up half of the front panel, with four hardware keys and the optical track pad below it – call connect, call disconnect, options and menu/return. The addition of a track pad is a nice touch. The QWERTY keypad is distinctly divided into four rows, while all keys in one row don’t have a lot of spacing between them. The key size is fine though, and that’s a huge relief. Interestingly, there is a dedicated camera key as well, laid out amidst the traditional keys in a QWERTY keypad.

The left side of the phone has the volume rocker, distinctly identifiable as a thin strip of blue colour. The right side hosts the micro USB slot, while the 3.5mm jack is on the top panel. The back of the Vodafone Blue has the 2MP camera with the LED flash, and what seems to be a pretty big speaker. Right in the middle is the Vodafone logo, not in the traditional red, but silver.

The battery cover is plastic, and we were a bit disappointed by the quality of materials used and the mechanism to open the battery cover. Firstly, we do not like the ‘use nails to prise open’ mechanism. Secondly, it opens up sideways, rather than near the bottom. This does two things – makes opening the cover harder than what it could have been, and runs the huge risk of the plastic snapping. More so, there is a danger of the ‘teeth’ on the cover breaking away.

Apart from the battery cover issue, we quite like the build offered by the Vodafone Blue. It isn't feather light, but a weight of less than 100 grams isn't something we can find any fault with.

Features
One word – Facebook! The darned Facebook button holds more aces up its sleeve! Having given us a trailer with the HTC ChaCha, and probably heard our criticism, it is back with a vengeance. This time offering the functionality and access we had expected in the first place. And not remain just a quick post thing.

Interestingly and annoyingly, the moment you attempt to sign in your user ID to log in to Facebook, the auto correct feature will instantly change it to something else. And yes, the first word of the user ID is also always capital! A bit of chaffing is needed here.

Performance
We really cannot expect much from the 200MHz processor but then again, it really doesn’t need more (unnecessary, if you may) power considering what it is supposed to do and what it is aimed at.

The 2.4-inch QVGA display has a resolution of 320x240 pixels. It is a pretty okay display for reading text on, and the high-ish brightness levels means that viewing in sunlight won’t be a real problem. However, browsing web pages or viewing videos will be an eye straining experience.

The QWERTY keypad is very comfortable to use. The keys are essentially divided by the rows, and just make it a little difficult for the fingers to remember the key positioning. Typing quickly wasn’t a problem, provided you were looking at the keypad. Dedicated camera key is a unique feature, only because it is within the keypad layout.

Speaking of which, the 2MP camera is one that falls in the category of being there because it was asked to be. Not to expect too much from it, except a quick snap of something interesting to post to Facebook.

Vodafone Blue does cut down on features like Wi-Fi connectivity and 3G. While it is okay most of the time, with the slow speeds on EDGE, YouTube is almost certainly out of the question.

Despite being coupled with a pretty small battery, just 1000 mAh worth of juice, it manages to hold up quit well - about a day and a half to two days, from full charge to complete shutdown. This is with a fair number of voice calls and FB syncing in the background via EDGE.

Our Take
The Vodafone Blue isn't a device for everyone. It certainly isn't for someone who wants a smartphone and/or isn't a big Facebook user. Essentially, this phone is targeted at the youth, who want instant social networking connectivity, but wouldn’t want the phone to be very expensive. It has decent build quality and sleek looks as well.

Vodafone 555 Blue - Facebook will never be too far away Key Specs, Price and Launch Date