Oppo R5 Review: Slim on design, not so slim on price

The R5 is definitely the best slim phone that we have seen. It is much more sturdy than the Gionee S5.1 and even performs better, but there is no memory expansion, the battery life is just at par and there is ocassional heating. At such a price point, you expect a lot more. A good effort by Oppo, but does not meet out expectation.

Oppo now has a decent sized portfolio of devices in India and is one of the many Chinese brands who have managed to have a well known name around the world. One of their latest offering is the super R5 which gives a beating to the slimmest smartphone in India, the Gionee S5.1, in terms of thickness. But does it offer bang for the buck?

The Oppo R5 is all about the looks. With a super slim design, the smartphone offers a striking design which feels very strong thanks to the use metal. And its not just a metal trim, the frame and the majority of the back is metal giving a sturdy feel when you hold it. The edges are a bit sharp, but in not uncomfortable at all. In fact the R5 feels better than the Gionee S5.1 as it offers a much heavier and stronger design and a better grip as well. 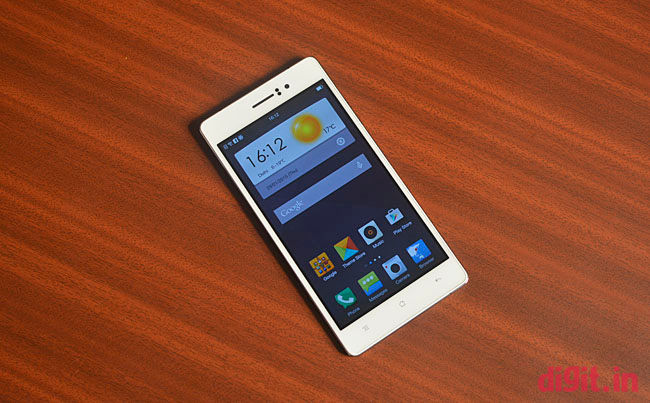 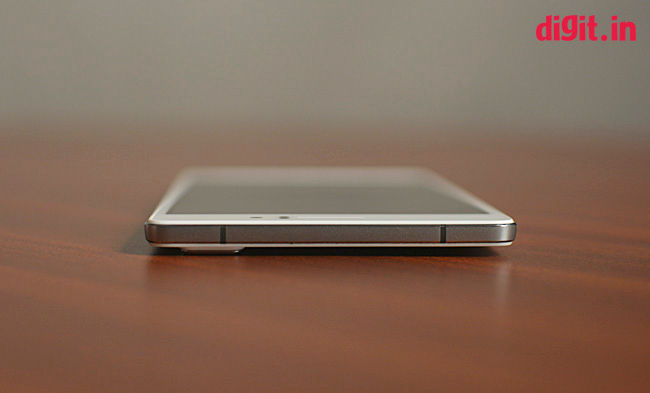 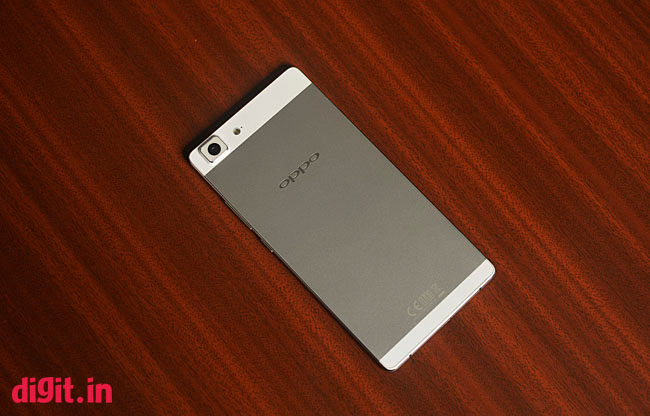 The display, being and AMOLED, offer great viewing angles and good colour accuracy. Under the display there are three capacitive keys and on top there is the earpiece, the loudspeaker, the front camera and a bunch of sensors.The metal frame on the edges has a brushed aluminum finish and houses the power/sleep and the volume buttons on the right, the microUSB port and the mic at the bottom and four strips for the antenna on the top and the bottom. There is no audio jack, rather you get a microUSB to 3.5mm audio jack attatchment where you can attach your earphones. This can be an issue if you want to charge and listen to music at the same time. 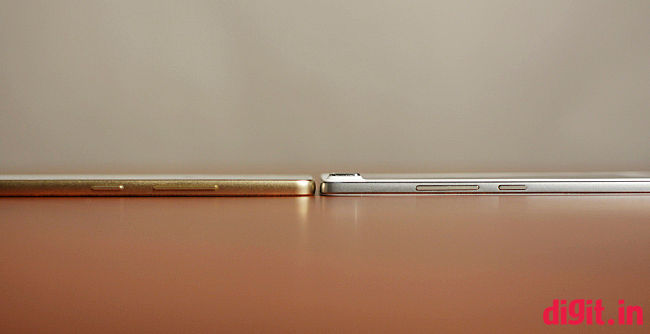 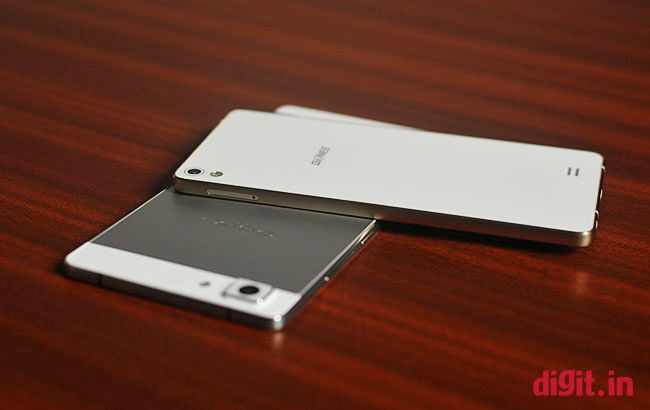 The back has an iPhone inspired design with plastic strips on the top and bottom and metal in the middle. The camera is on the top left which bulges out from the main body. There is also an LED flash and an engraved Oppo logo which gives it premium look.

The build and looks of the R5 are impressive and the smartphone feels very robust considering the slim design.

The R5 runs on Android 4.4.4 KitKat with Oppo's ColorOS 2.0 UI on top. Like almost every other Chinese smartphone UI, Color OS skips the app drawer and puts all your installed apps on your homescreens. Speaking of which, if you swipe to the left of your main homescreen, you get a dedicated homescreen for the music player which is pretty useful if you listen to a lot of music like me.

The UI is smooth and doesnt stutter or lag anytime. Thankfully there isnt a lot of bloatware but a couple of useful apps like a backup and restore app and a security app which offers a variety of features.You can also apply various themes which are available in the phone itself or download more from a dedicated store. All apps runs smooth and effortlessly but with just 11GB of available storage and no microSD card expansion, you will  limit yourself on the number of apps. 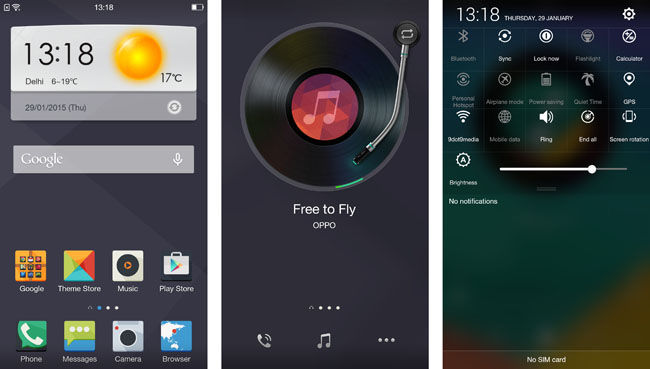 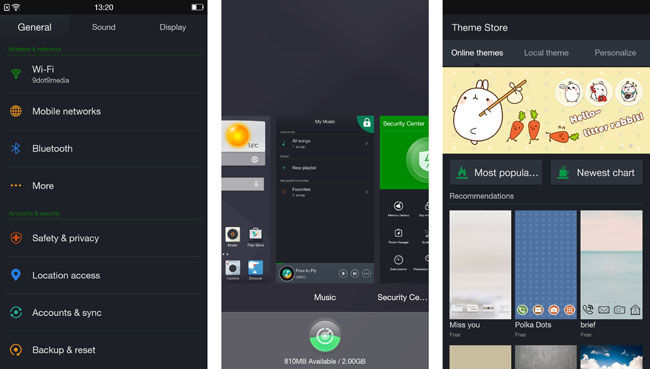 The smartphone is one of the few which adorns the new Snapdragon 615 chip. Coupled with 2GB of RAM and an Adreno 405 GPU, you do get a lot of power to play high end games like Real Racing 3 or Asphalt 8 without any frame drops. However since the smartphone is super slim, there is hardly any breathing space, and due to this after just 15 minutes of gameplay the phone will start to heat up. The phone doesnt heat up on charging or while watching videos, but once the SoC is under stress, it instantly start to heat up.

The battery life is not very impressive as there is only a 2000mAH battery pack which can give a full day backup only if you use the smartphone carefully.

We carried out a bunch of benchmark tests on the Oppo R5, here are the results:

For daily usage and occasional gaming, the smartphone is not a bad option. But with such a high price, you would want a smartphone that can do it all. Not to mention the omission of a microSD card slot makes it

The Oppo R5 uses a 13MP camera with a Sony Exmor IMX214 BSI 1/3.06-inch sensor (F/2) along with an LED flash and a front 5MP for taking selfies and video calls. The rear camera is capable of shooting 1080p videos as well. The camera app comes with a bunch of modes including an expert mode which gives manual control of your focus, shutter speeds, ISO and exposure compensation. Although you can only select speeds slower than 1sec for long exposure shots, but it is still quite useful. If you want a higher resolution image, then you can try the UHD mode which takes pictures at 24MP/50MP resolution, using the same interpolation technique as the Find 7.

Pictures turn out to be good but not the best. Colours are slightly undersaturated when shooting indoors and there is visible noise and loss of detail when shooting in low light. You can however always compensate with the long exposure mode.

Video recording is smooth and the videos turn out to be sharp and properly exposed. Even the audio recording is crisp although we could do with slightly better volume.

Check out the sample images:

The R5 is an attractive smartphone but a high price tag, occassional overheating of the CPU just ruins the package. The design is impressive and it doesnt feel as fragile as the Gionee S5.1, but if you are spending Rs. 29,990 you do expect a lot more than just a slim jim. For the same price you can get the Nexus 5, Sony Xperia Z1 Compact or even the Moto X 2nd gen.