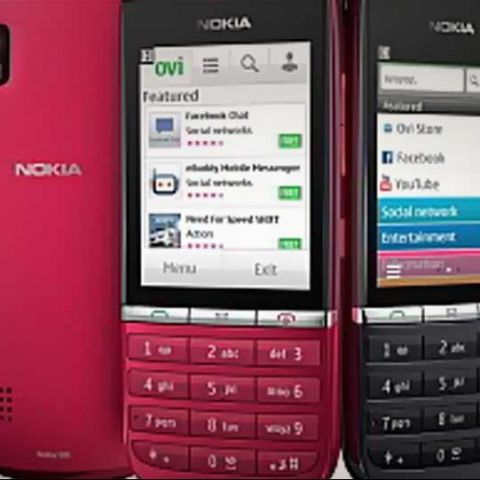 A phone that gives you access to basic mail on the go, a bit of web browsing and social networking, the Nokia Asha 300 at Rs. 7,409 offers some nice features such as 3G connectivity, a 1GHz processor and a strong build. The biggest downer however is the absence of Wi-Fi and a cumbersome resistive touchscreen experience.

The Nokia Asha 300 is a part of Nokia’s entry-level lineup that offers features that go beyond making calls and sending SMSes. With 3G connectivity, a touchscreen and social networking integration, should this be the next feature phone you opt for, or are you better off aspiring for a smartphone?

Look & Feel
One look at the Asha 300 and you will be reminded of the good old days when Nokia ruled the roost. The device has a candy bar form factor with rounded edges that gives it a classic yet modern day feel.

In the box you get a pair of headphones, charger and a 2GB memory card. The device supports micro USB but you will have to purchase the cable separately. The addition of the 2GB card is a nice touch sine the internal memory of the device is limited to 140MB. You can access the memory card slot without removing the battery but it isn’t hot swap, as you will have to remove the rear panel. The slot for the SIM card rests under the battery.

In terms of connectivity, the device has the charging port, micro USB and the headphones jack located at the top. Apart from being able to transfer data, the micro USB port also doubles up as a charging port.

The right side of the device has the volume rocker and the sleep/wake switch, which are really stiff. You will mostly end up using your nails to press these buttons.

The rear of the device has a fixed focus 5MP camera without a flash and there is no front facing camera on the device.

Overall, the build of the Nokia Asha 300 reminds you of old school Nokia and the device is sturdy enough to survive more than a few falls. 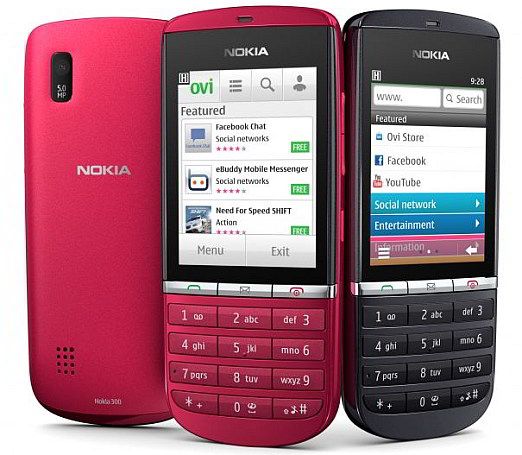 Features & Performance
If you are looking for a cheap replacement for your smartphone, we suggest you look elsewhere as the Nokia Asha 300 is more of a feature phone with added social networking, mail and Internet capabilities. These capabilities feel limited as you can access the Internet only via your mobile network. The device doesn’t support Wi-Fi.

The display on the device is a 2.4-inch TFT resistive touchscreen with a resolution of 240x320. With a 1GHz processor and 128MB RAM under the hood, you’d expect the interface to be very zippy. The result however is the complete opposite. The resistive nature of the touchscreen makes the device cumbersome to use leaving you with a slightly frustrated experience. It would have been better if Nokia would have charged a bit more and offered an improved touchscreen experience. The addition of a D-Pad would’ve been nice, as sometimes navigating through the touchscreen can get tedious.

When you power up the Asha 300, you will be prompted with a “slide to unlock screen” which gives you the feeling of using a poor man's iPhone. The UI and interface on the device goes beyond simplicity. The home screen can be customized with four widgets. These can be any feature you want, ranging from the date and time, social networking, chatting to even your favourite contacts. This is a nice touch as it gives you access to your most used features straight from the home screen. You can also swipe left or right on the home screen to launch apps or use it as a shortcut to access folders.

One of the biggest disadvantages of the OS is that it does not support multitasking. If you need to switch from one app to another, you need to exit the app completely. Only music can be played in the background but the music app too shuts down if you press the red call end button. You have to go into the options and check “Play in background” before exiting the app.

A good touch however is the after effects available on the device. You can do the basics such as rotating, cropping and adjusting the brightness and contrast of the image. There are also a few funky options such as adding frames, clipart and text to the images you have clicked. The camera also records VGA quality video. Don’t expect to shoot those home videos with the camera on this device, as its output isn’t great.

There is however, one major downside. The Nokia Asha 300 simply can’t sync with Google contacts and a simple drag and drop of a .vcf file containing all your contacts will not work either. We had to export the contacts, sync them with Outlook Express and then add them to the Nokia Suite to sync with the device. It is a painful process and we hope Nokia integrates the simplicity of Google Sync to Nokia Suite.

Visit page two to read more about the Nokia Asha 300's features and performance, and, our verdict...

The Nokia Asha 300 performs the function of making a call quite well. The audio is clear in the earpiece as well as the bundled headphones. Typing messages takes you back to the good old days where you can use predictive text or the three alphabets per key method to type a message. The absence of a D-Pad may make it a little difficult for some to navigate but we found the response of the touchscreen to be quite adequate.

Social networking is a big part of today’s world and the Nokia Asha 300 integrates this quite well. You have access to you Facebook, Twitter, and Ovi chat and accessing these accounts is as simple as clicking login. Even though the screen is really small it gets the job done to see status updates and tweets. The navigation to is kept simple with the use of the touch screen to scroll.

Browsing the web isn’t the best experience on the Asha 300. For starters, the screen is really small and you will have to zoom in to read the text. If you want to watch YouTube videos on the go, you have to rely on the mobile YouTube site (m.youtube.com) as there is no app for the video sharing website nor does the device support the full site. Since the device doesn’t support Wi-Fi, you will have to rely on your mobile network connection to watch videos. In areas where the network connection is strong, this worked really well. The down side is that the quality of video is really pixelated and the overall experience is lackluster.

In terms of entertainment, the Nokia app store is accessible through the device directly or you can download the apps on your PC and sync them to the phone. Angry Birds lite does come preloaded with the device but the experience isn’t the best again due to the small screen and its resistive nature. Even though Angry Birds ran smoothly on the device, the experience was underwhelming due to the small size and resistive nature of the touchscreen.

The battery life of the Nokia Asha 300 is a definite winner. It lasted for about two days with average use of chatting, social networking calling and messaging.

Our Take
If you are in the market for a phone that gives you access to basic mail on the go, a bit of web browsing and social networking, the Nokia Asha 300 can be one to look out for. At a price of Rs. 7,409 this phone offers some nice features such as 3G connectivity, a 1GHz processor and a strong build. The biggest downer however is the absence of Wi-Fi and a cumbersome resistive touchscreen experience. If your expectations and needs are higher, we suggest you increase your budget and get an entry level Android smartphone like the Samsung Galaxy Y.