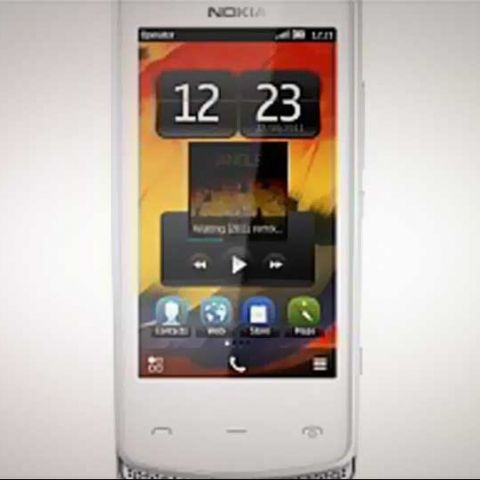 The Nokia 700 does well on the spec sheet - 1GHz processor, 2GB internal storage space and an excellent AMOLED display. And all this in a very slim yet solidly built form factor. While has the UI familiarity aspect with previous gen builds, Symbian Belle isn't the new wine in a new bottle that some people had hoped it would be.

The Nokia 700 reminds us of the Sony Ericsson Xperia Ray - slimness personified. With the new Symbian Belle OS, expectations are quite high that this may give a bit of tough competition to Android. While we are impressed with the phone, the OS doesn’t exude a lot of confidence.

Despite keeping the weight down so well, the build quality is literally flawless. It is plastic all around, but doesn’t feel cheap or flimsy at all. In fact, we did not find even the slightest but of flex anywhere on the phone. The 3.2-inch display is the AMOLED type, and is accompanied by three hardware keys - calls connect, calls disconnect and Home. Apart from home, the likes of the return and options are on the touchscreen interface. Not the most optimal user interface experience, we must say. At the very bottom is the speaker, in a slightly curved grille design, on a step below the height of the display and the keys. Helps a lot when you aren’t looking at the phone to know where the call connect and disconnect keys are.

Flip it over and there is the 5MP camera with LED flash. We like the battery cover opening mechanism - simple slide hinge to pop open. On the right spine are the volume rocker, display lock and the camera key. The 3.5mm headphone jack, the micro USB port are on the top, along with the thin pin charger we had seen till sometime back with Nokia phones.

The build quality is better than expected. While the Nokia 700 doesn’t have the killer looks or snazzy colours to spice things up, it does have a sense of calm perfection about it.

Visit Page Two for a look at the Nokia 700's features, performance, and our verdict...

Features & Performance
Before moving on to the hardware side of things, let us talk about the new OS on the block - Symbian Belle. While there are claims that serious design changes have been made to the UI, we think it still looks too similar to the Symbian Anna, or Symbian^3 for that matter. Yes, the icons have a slightly different treatment, you can set different wallpapers for all six home screens, and there are a couple of very useful new widgets. But, the problem is simple - it still feels archaic in the company of Blackberry OS 7, let alone the likes of Android, Windows Phone and iOS.

The variety of widgets isn't very good either, beyond the basic clock, media and news ones. There isn't even a decent weather widget preloaded, and searching on the Ovi store doesn’t throw up too many options.

Unfortunately, a few interface niggles have left us more confused than anything. For example, open the Maps application, click on Map from the homepage - now click on Search. If you search for a location, it’s all fair and good. But if you want to return back to the map, we could not find a way to do that without having to exit the app and open it again. Same if you open the camera. On the topic of maps, we had downloaded three sets of Maps for the Delhi NCR region (1. Delhi 2. Delhi/ Uttar Pradesh 3. Delhi/Haryana). However, when we started the phone the next day and opened the Maps application, we were prompted again to download maps. The maps that we had downloaded apparently disappeared in thin air!

The menu still resembles the look of the old Symbian operating system - it is just one long list. If you are in the Settings menu, or searching going through the options menu in most apps, it looks like a dated file system. We believe that streamlining it to a more visually appealing design would have made it easier for users to navigate through the wades of menu options, with sub menus and even a third layer of menus.

What we loved about the Symbian Belle was the new drop down notification bar. Very similar to the one we see on most Android phones, it offers instant access to settings for mobile data, Wi-Fi, Bluetooth and switching to the Silent profile. Belle also brings in support for Near Field Communication (NFC), which could possibly be the way we pay by tapping the phone at access points in stores, sometime in the near future.

The Ovi Store has the essential apps - Facebook, Twitter and even Angry Birds. But it is nowhere close to the sheer numbers and variety offered on Android Market or the Apple App Store.

A 1GHz processor and 512MB of RAM power Nokia 700. The processor isn't a dual core, but a single core ARM 11. With 512MB of RAM to play with, we felt there is enough headroom to open a few apps, and that’ll not slow down the system. At most times, Belle performs very well, with no performance issues. However, there are times when it inexplicably slows down for a while, and then speeds up normally. For example, queue 3-4 apps for download, and browse the web in the meantime. The phone will be fine while the apps are being downloaded, but will slow down during the time the app is actually being installed on the device. Just to be sure, we stopped all app downloads and opened a couple of web pages, and let Facebook, Foursquare and Angry Birds shift to the background. No slowdowns noticed whatsoever. This is surprising considering that games like Need for Speed and Angry Birds loaded quite quickly, while a task like app installation slows down the system. Just makes us believe that Symbian Belle as an OS still suffers from the same shortcomings of the Symbian^3 and the Symbian Anna. Swiping between the home screens, navigating the app list and even moving forwards and backwards in the settings menus was silky smooth, with no lag in the user interface experience.

The 3.2-inch display is the AMOLED version, with a resolution of 640x360 pixels and the Gorilla Glass treatment. This phone also has the Nokia ClearBlack display technology, something that we saw in the excellent displays of the Lumia 800 and the Lumia 710 Windows Phone based devices. The colour depth is excellent, and we didn’t see any gradations even on the usual suspects - light green and yellow. While you may not really use this phone for multimedia use very often, the display is more than willing to offer a good video playback experience. Text crispness is extremely good, allowing you to read even the quite small font sizes.

A slim display does bring in its own shortcomings as well. The on-screen keypad is one such casualty. In portrait mode, the keypad is quite painful to use - the keys are tiny and not spaced out at all. Typing is a slow and careful task, be it messages or mails. Things do become a bit better in the landscape mode, but the key size is still a tad too small for quick typing without spelling errors.

If you are into social networking, you may not appreciate the complete ‘talk to the hand; treatment that generations of Symbian OSes give to the likes of Facebook and Twitter. Yes, there is a Social app, but that’s it. The accompanying widget isn't a delight to use either. You can download the official FB, Twitter, Foursquare and LinkedIn app, but that is just one app too many to check in a day.

As a phone, the Nokia 700 has not much wrong with it. The call quality is great, and it retains network signal where most other phones aren’t able to, particularly in elevators. Earpiece is loud and very clear. Ambient noise around the calling party is sufficiently blocked out. The speaker is quite loud as well, but does start jarring a bit at volumes beyond 70%.

If you happen to be using your phone for medium voice call quantity, with constant connectivity to social networking and IM, the Nokia 700’s tiny 1080mAh battery will last a day, at the max. A bigger battery is needed, definitely.

Our Take
After all the good work Nokia had done off late with the Lumia range of smartphones, the Nokia 700 does come as a crushing disappointment. Let us specify that the hardware is solid and phone is built very well, but what disappoints is the OS - Symbian Belle isn't the upgrade over Symbian Anna as some had hoped it would be. If you have the budget to spend on this phone, we suggest you pick up the Nokia Lumia 710 from the next shelf, and enjoy a combination of excellent hardware and an amazing Windows Phone 7 user interface experience. After all, Symbian Belle still isn't up to the likes of Windows Phone and Android.