Moto X is as exciting as the Moto G with a healthier spec-sheet and a higher price tag. The smartphone manages to deliver a great performance package with a sturdy and balanced design. With unique features like Active Display and Touchless Control, the handset is worth the money spent. Probably the only few things that annoyed us were the very basic capabilities of the camera and the nanoSIM slot which is still not so prevalent (or popular) in India.

After the acquisition by Google, Motorola launched two Android smartphones which have been doing quite well globally. We’ve already reviewed the Moto G, which was the 'talk of town' and is still one of the most recommended smartphones in the budget category. The Moto X, on the other hand, is the elder brother of the Moto G with slightly better specifications and a comparably expensive price tag.

So is the Moto X worth considering over the Moto G? Read on to find out.

BUILD AND DESIGN
Just the like the Moto G, X is mostly made of plastic which does not necessarily mean that it is of low quality. It does come with changeable back panels, but sadly it isn’t user removable so one has to get it factory-fitted. There is also a special wood-finish back panel which you can buy in two variants (walnut and teak) by paying Rs.2,000 more. We got the plain white version which, by the looks of it, feels pretty good. 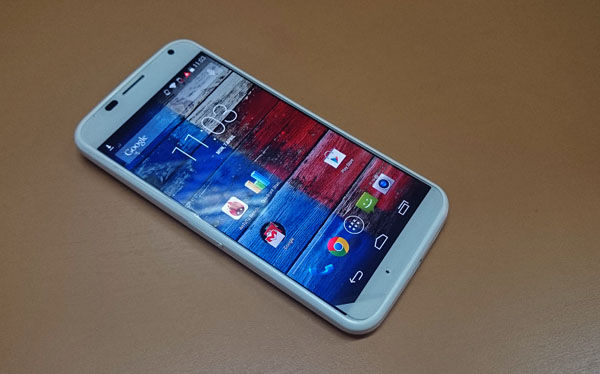 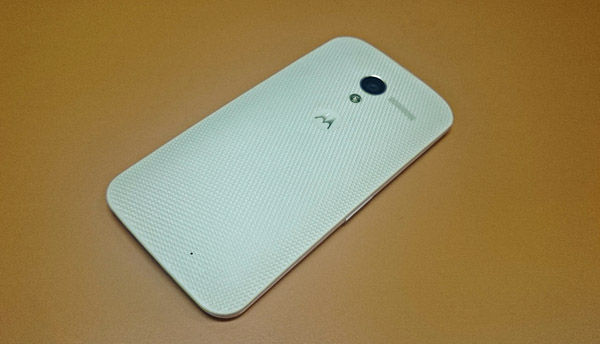 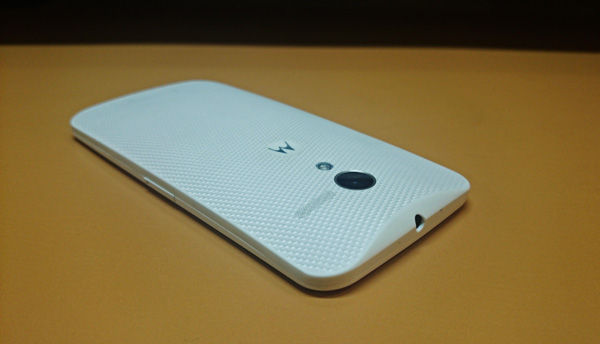 The display is a 4.7 inch AMOLED touchscreen panel with a resolution of 1280x720 with Gorilla Glass protection. Yes, the pixel density is lesser than the Moto G, but the Moto X has smaller bezels than its younger sibling. When compared side by side, both the handsets are similar in size although the Moto X is slimmer and lighter in weight. 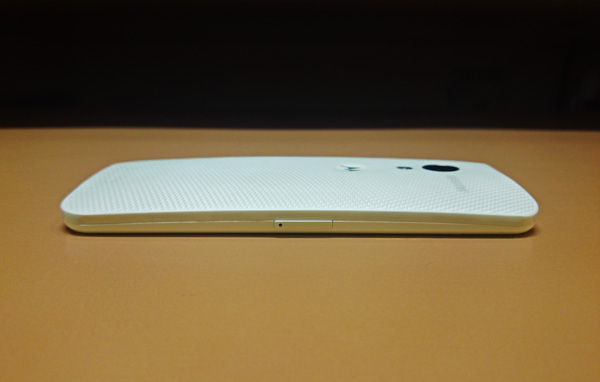 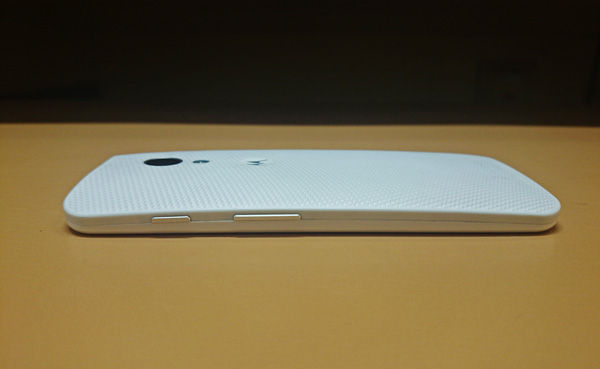 Above the display we have a front facing camera, the light and proximity sensors, and the earpiece. On the right, we have the power/lock key and the volume control keys in a chrome finish. On the left is the nano SIM card slot (yes you will need a nano SIM, which is a bit annoying), the bottom has the microUSB port and the top has the 3.5mm audio jack. On the back, there is the 10MP camera along with an LED flash, the speaker and a shiny Motorola logo.

If compared to Moto G, X is definitely lighter and doesn’t feel any bigger. Overall the smartphone fits quite well in hand and one-hand operations don’t seem like a difficult task. The touchscreen is very responsive and the touch-vibration feedback is pleasant.

UI AND PERFORMANCE
Just like the Moto G, X runs on stock Android 4.4.2 with a splash of Motorola wallpapers. Moto X does feature two very useful and exclusive features which make the experience on it worth the money.

First, let’s talk about the Active display feature. This is more of a lockscreen feature where the display stays active and shows you a digital clock. Underneath the clock you get a small circle which notifies you if you have a missed call, a text message or any notifications from the configured apps. What’s more, you can just swipe the notification circle to directly open the app related to the notification. 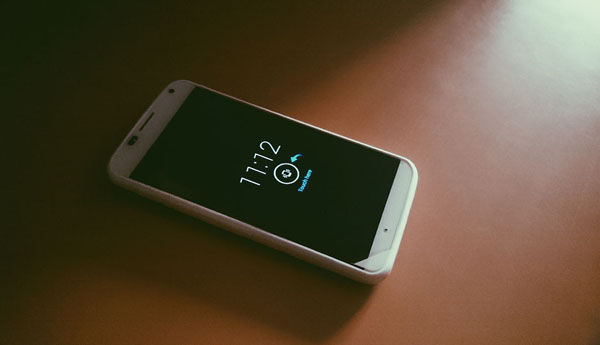 The other neat feature is the Touchless control. Motorola has integrated basic control functions of the handset with Google Now. You can make calls, send texts, open apps and a lot more by just speaking to your Moto X. This feature does take some time to learn and get used to your voice, but once it's in place, the feature works very well.

Running on a dual-core processor, Moto X sounds like an underpowered device, but it is no slow-poke. The Snapdragon processor is clocked at 1.7Ghz with 2GB of RAM and an Adreno 320 GPU. Quite frankly the SoC provides great performance power. We tested the smartphone’s performance by running some benchmark apps. The results were very promising and we were impressed with what the Moto X had to offer. 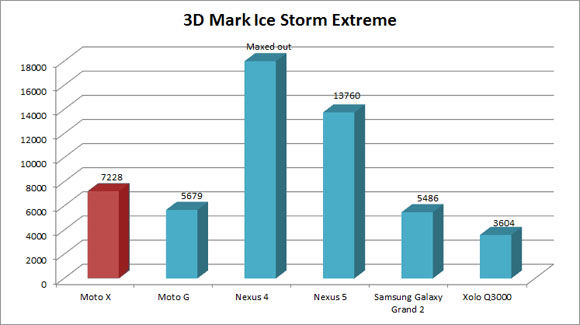 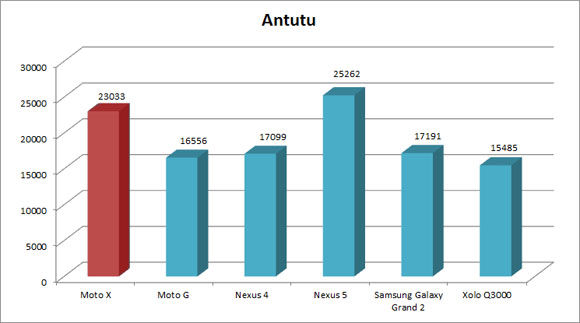 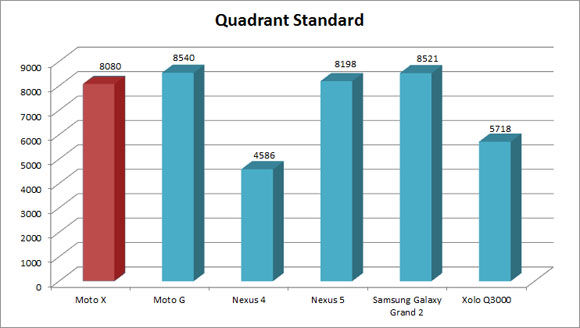 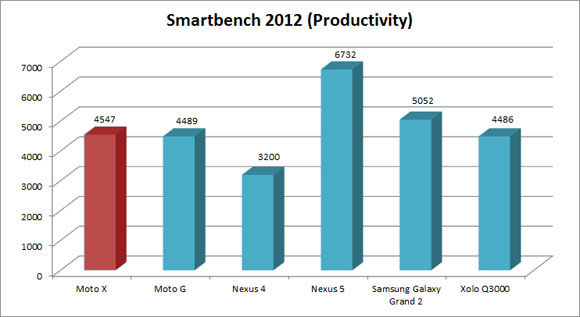 Moto X didn’t disappoint us in the gaming department as it easily managed to run power hungry games like Real Racing 3, Asphalt 8 and Dead Trigger 2. Even popular games like Subway Surfer and Angry Birds were a piece of cake for the hardware on the Moto X. The 4.7 inch display didn’t seem too big while playing games; to be honest it felt perfect.

The battery on the Moto X comparatively offers one of the best backups on an Android device. In our standard battery test we found that the smartphone is capable of running a full HD video for about 10 hours (after a full 100% charge). This means that the smartphone should give a full day’s charge on a normal usage.

CAMERA
The camera on the Moto X is not something that can give you Lumia-like shots. The camera app is actually very basic and we didn’t see enough settings to fiddle around with. We saw the similar camera UI on the Moto G, which was slightly disappointing. Nonetheless, the camera can take 10MP pictures and is capable of shooting full HD videos.

You do get HDR and panorama features, but controlling exposure or adding filters is not available. Overall pictures come out decent and even pictures in low-light conditions are just usable.  Check out some of the sample pictures:

If you like shooting pictures occasionally then the camera won't be much of an issue, but for the avid photographer, you might want to give the Moto X a pass.

CONCLUSION
There isn’t a lot of difference when you look at Moto X and Moto G, but frankly the hardware inside makes a huge difference. The Moto X truly feels better than the G, all due to the slimmer body and a snappier processor. The UI is exactly the same, although features like Active display and Touchless controls give extra points to the Moto X. If you can splurge a bit more than what the Moto G is offered at, then you should consider the Moto X.

Other strong competitors include the Samsung Galaxy Grand 2, Xolo Q3000, Sony Xperia T2 Ultra and even the Gionee Elife E6.