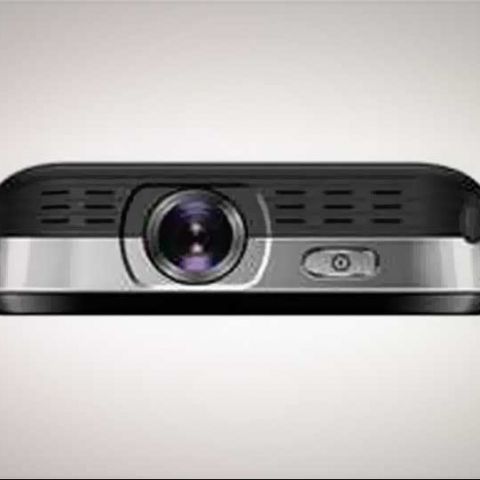 It doesn't have many rivals in its domain, and the MTP9 does seem to perform without pressure. It looks much better than what its price may make you assume, and is surprisingly light for its bulk. This isn't a smartphone, and was never designed to be one. It is a basic mobile phone, that offers something extra - a portable projector. And we think it is a good deal.

While none of the global players seem bothered about this genre of the mobile phone, a bunch of Indian mobile manufacturers have the projector in mind when making a mobile phone. And Maxx is the third such brand, after G’Five and Spice.

Look & Feel
At first glance, the Maxx MTP9 Focus does look quite a decent package. Unlike most low cost feature phones, the MTP9 feels better built. Even with the battery inserted, this is well under 100grams. The 2.8-inch resistive touchscreen is accompanied by three hardware keys - call connect, call disconnect and return, that also doubles up as the contacts key. The bezel around the display is quite thick, presumably keeping in mind the dimensions needed for all the hardware inside the phone. The thickness of the phone is a testament to the same fact.

The right spine has the volume rocker and the camera button, that also activates the projector mode when long-pressed. There is a micro USB port as well, right in the middle on the silver strip that runs all around the phone. On the top is where you see the projector, and the power key. Flip the phone over, and there is a chrome bordered rectangle within which is the 5MP camera. Around this are some vents for the projector. On the bottom of this panel is the speaker. The battery access mechanism is quite smooth. You just slide down the portion of the cover below the camera. It is one of the neatest mechanisms we have seen in a budget phone in a long time.

The phone is mostly black plastic, with a silver strip running along all four sides of the phone. We find the build quality quite good, with no real rough edges. That says something, for a phone that isn’t very expensive.

Features & Performance
The 2.8-inch touchscreen on this is the resistive type, and as is the case with most resistive screens, the response is iffy. There are times when the response is as smooth as that on a capacitive touchscreen, but at other times, there are multiple stabs needed to even unlock the display. No stylus is on offer with this resistive display, which means you will be fighting with the display for some time.

The User Interface has clearly been inspired by the ones seen on Android, be it those of the phone manufacturers or even the likes of LauncherPro. While it looks good, the negative impact is the performance. Important to remember, this is a Java based smartphone with not a lot of processing power. Any little load will slow down the phone, and it is quite visible as you attempt to navigate the menu. There is the visible stutter as a new set of graphics is set to appear on the screen. Yes, there are even widgets! You can deploy a maximum of 4 widgets at one time, from a predefined list of about 10.

Having said quite a bit about the resistive touchscreen’s inconsistency, it will be pretty much on form when we say that typing an SMS on this phone isn’t an easy task!

Visit page two to continue reading about the Maxx MTP9 Focus projector phone's Features and Performance, and Our Verdict...

The MTP9 Focus is a dual-SIM GSM phone, with GPRS and Bluetooth. No Wi-Fi or 3G though, but enough for the preloaded social networking apps to be useful. The call quality is quite good - loud and quite clear. The speaker for handsfree is extremely loud as well, quite useful in noisy surroundings. There is a 5MP camera, but a flash has been glaringly left out. And so has the autofocus capability. Images are passable, only in the perfect scenario of good ambient lighting.

With the MTP9’s projector being the hot point, we were quite excited to see how it performs. There is no dedicated key to switch on the projector, nor is there an app in the menu that allows that. The camera key on the right side spine needs to be long-pressed (about 5 seconds) and the phone switches to projector mode. Maxx mobile claim that this can project at a 42-inch display. While that claim is true, the projector isn’t very useful at that size. The sweet spot for this projector is around 30-inches, anything beyond that just gets a washed out look. This phone will playback AVI files with ease, but will not play back any MKV files. The projection quality is more than satisfactory, if you keep the size up to a max of 30-inches to 32-inches. Colour is sufficiently deep, and there is a distinct crispness that is usually missing in most projector phones.

However, fast moving scenes were still not very fluid, and coming from watching a television with 200Hz motion flow, the lack of even the slightest bit of smoothness is more than visible. Navigating within the projector interface is a bit confusing, since the phone’s own display is switched off at that time. You are relying on the projected image to see what the status is, and since there is a bit of a lag at this time, double press return and you are out in the phone menu instantly. Now, if you were playing back a video, it will not resume from the previous position (at last it didnt for all the videos that we tried). Maxx are offering a projector stand free with the device.

Battery life is quite okay. It will get you through a 3 hour movie on a single charge. As a phone, this will last about 2 days with the usual mix of voice calls and messages. While a 1200mAh battery is getting the job done, a slightly bigger one would have made this a truly portable media device.

Our Take
The Maxx MTP9 is a dual-SIM phone with a good battery life, a lightweight but well built body and most of all - a projector. The resistive touchscreen is a bit of a pain to use, as it can be very inconsistent in the response. Interestingly, despite not being a smartphone, it comes with a whole host of Social Networking apps - Facebook, Twitter and Nimbuzz. For a box price of Rs 6999 for this phone, it is aimed at those who want the added projector feature. And for that, we think this is a good deal.