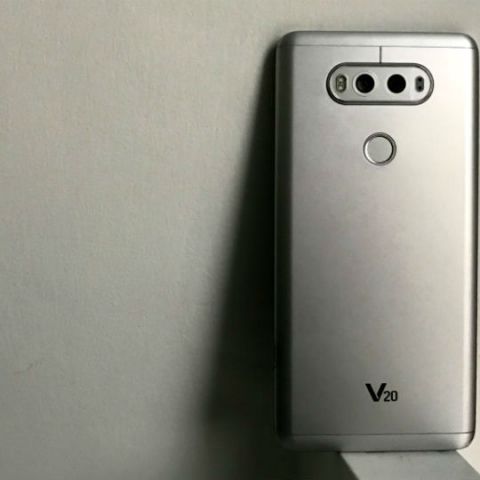 The LG V20 is a phone for the audiophiles, or for those who want a removable back and battery. However, if those aren't your priorities, then the Google Pixel/Pixel XL or iPhone 7 Plus far surpass the V20, and are better choices.

But Nougat isn't the only attraction for the V20. It comes with a removable back and battery, and audio enhancements that make discernible differences. Does that make the LG V20 a phone worth buying, though? Or is it a niche product, for a select few buyers only?

Unlike LG flagships of late, the V20 is tall, which makes it unwieldy. It becomes even more of an issue, since you have to keep reaching for the top of the device, for the secondary display. 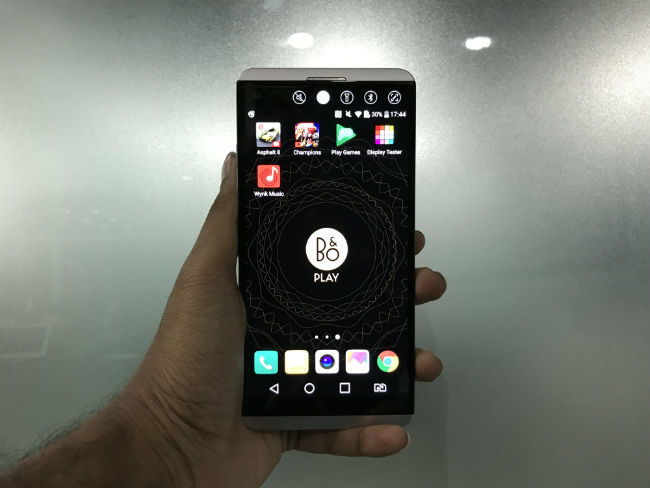 The LG V20 is tall and wide, making it unweildy, even for those with large hands

LG has dropped its plans for a modular future, but the V20 retains the button to detach modules. Placed on the bottom right, this button unlocks perhaps the best feature of the LG V20. It pops the back open, allowing you to remove the battery. It’s a welcome addition in a world full of ‘unibody’ metallic devices. The only use of plastic here is on the two thin strips above and below the back panel. The back and battery on the LG V20 are removable.

Barring the height, the other problem with the V20’s design is that it doesn’t feel as unique. This is likely a result of MIL-STD-810G certification that makes the V20 really resistant to drops.

Personally, I’d have preferred a more premium body. Shock resistance doesn’t really protect the screen from breaking, and the LG V20 seems to take ugly bumps on the body quite easily. I got one unknowingly, without having dropped the phone even once. 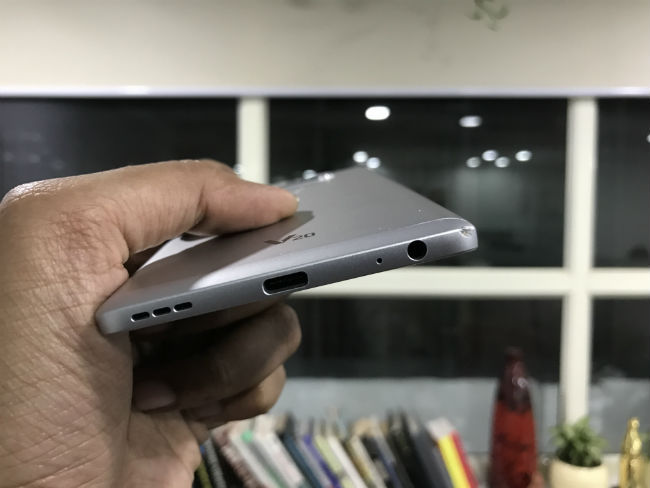 My review unit got an ugly bump, without being dropped or bumped even once.

As with the G5, the rear fingerprint sensor is also the unlock button, and there’s a slightly raised module above it, that houses the two cameras, flash and laser auto-focus system. The V20 may be big, but it feels lighter than a phone this size would.

A notable departure from LG’s flagship phones is the LCD panel used on the V20. The company’s displays usually look uber premium, with well represented colours.

While the V20’s display wouldn’t qualify as bad, it’s a notch below the flagship range. Black levels are noticeably lower, thanks to some light leak near the edges.

With the secondary screen on, when the 5.7-inch counterpart is off, you’ll see this leak pretty easily. The pixel density stands at 513 ppi, which is good.

Speaking of which, the secondary display can be useful at times, but it’s not a feature anyone really needs. You can place your most used apps, quic toggles etc here, but I found it pretty much a gimmick for the most part. It doesn’t really ‘add’ to the functionality.

The LG V20 is the perfect smartphone for music lovers, especially those who record a lot of audio. I played a song on the iPhone SE, and put the LG V20 on recording. The recorded output from the V20 actually sounds much better than the original on the SE. The LG V20 is obviously louder, but that’s useful only in indoor conditions. More importantly, audio sounds richer. You can hear more notes on the V20.

The HD Recorder even allows you to record audio and save it in FLAC format. Audiophiles will appreciate this. The LG V20 has a 32-bit Hi-Fi DAC for digital to analog conversion, and three Acoustic Overload Point microphones for HD audio recording. While these do sound gimmicky on paper, they’re indeed useful for those who really need it. Between the LG V20 and HTC 10, the former is a tad louder, and clearer in terms of audio. The V20 is also better at recording audio.

The V20 runs on the Snapdragon 820 SoC, and 4GB of RAM. Our initial performance tests showed quite a few lags while gaming. This is because the phone is on the Game Battery Saver mode by default. Turning this off gets it back to flagship standards.

While LG has surprisingly not fitted the Snapdragon 821, the 820 chip brings it at par with any flagship today. It is indeed fast, as far as Android phones go. And just like any Android phone, it’s slower than the iPhone 7.

That said, if you’re nitpicking, the Google Pixel XL is ever so slightly smoother. The difference perhaps is between Google’s Pixel launcher and LG’s UI.

The 16+8MP combo on the V20 is the same as on the G5. The camera has just as many manual controls as before, and the quality is no better either.

Sadly, that puts it well behind the Pixel or iPhone. Dynamic range is much lower than the Pixel XL, and low light photos, though satisfactory, aren’t up to the new flagship standards the Pixel XL brought forth.

As before, the wide angle camera produces a fish eye effect. If you like this, or know how to use this creatively, then there’s nothing to worry about. You won’t however, be getting optical zoom, or other possible impacts of a dual-camera.

Its 3200 mAh battery gives the V20 longevity. The phone drops 5% battery over 15 minutes of gaming, on its performance mode (mentioned above). On the PC Mark test, the V20 runs for over 5 hours, which is a satisfactory score too.

In practical terms, this results in about 12-14 hours of battery per day. So, you’re set for the work day on a single charge. However, when you have a longer day planned, keep the charger handy. This isn’t a phone that’ll last 24 hours. Here, again, the iPhone 7 Plus is better.

There’s no denying that the LG V20 is a fast and good phone. It’s just not in that absolute premium class. It’s not built like an iPhone, and it lacks the camera quality of the Pixel and iPhone.

The primary reasons to purchase the LG V20, are its removable back and battery, and superior audio performance. If you’re part of that niche segment, the LG V20 is the only flagship that fulfills your needs.