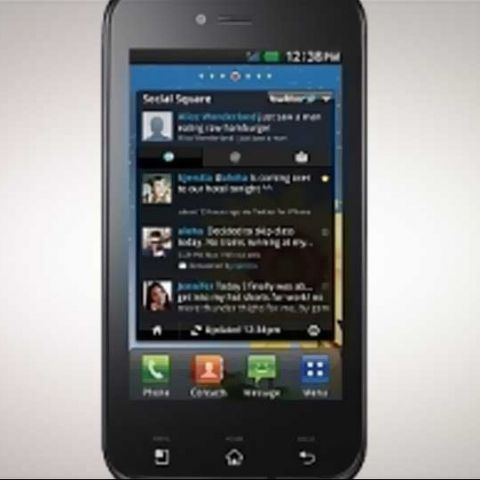 For Rs. 19,000, the Optimus Sol offers a stable Android experience that doesn't get bogged down over time like some phones tend to. The bright display is carried forward from the other Optimus siblings. The glossy back is a scratch magnet though, thanks to the glossy black finish.

What the Optimus Sol brings to the table is a competent mid-range Android smartphone.

Look & Feel
Straightaway, we have to pick a fault. No, it isn't anything major - we think the Sol looks a bit bland. Bland we say because the plain-Jane looks are now a bit previous generation. When we have quite distinct looking smartphones in this price bracket (and some even less expensive) - Motorola Defy , Nokia Lumia 710 and the Samsung Omnia W, we think the Sol doesn’t have the visual punch as some of the other phones.

Having gotten that off our chest, we must say that it is built well. While plastic has been used throughout, there aren’t any rough edges to the build. Despite our best attempts, we could not get it to flex anywhere. Going by the dimensions of the phone, you would be forgiven for thinking that this has a 4-inch display size (actually 3.8-inches). However, what it has is an understated look that wouldn’t win any beauty contests, but is a very functional design. On the left spine is the depressed volume rocker, which you will know only once you run your finger over the area. On the top are the power key, the 3.5mm headphone jack and the micro USB slot with a neat cover over it. Don’t like the battery cover opening mechanism, which doesn’t feel classy at all. Even more so, you are scared of breaking it every single time you attempt to open it. And this is one glossy black piece of plastic that is a complete scratch and dust magnet.

The three touch sensitive keys below the display light up when touched, and have the guidance text written above them, if you look hard, helping the uninitiated understand the purpose. They don’t light up however. Since you wont be able to see them clearly in the pictures, they are - menu, home and back. No search key on this phone.

We believe that the Optimus Sol is meant for someone who isn't bothered about having a phone that looks flashy, and is more concerned with the build quality and usability. We think this phone checks both criteria successfully.

Features & Performance
Powering the Optimus Sol isa 1GHz Qualcomm Snapdragon MSM8255 processor and an Adreno 205 GPU, with 512MB of RAM. Quite clearly, this phone has no ambitions of a stake in the power struggle, but will deliver consistently solid performance. Quite an achievement, considering this is a mid-range Android smartphone. Even before we did the benchmark tests, what caught our attention was the clearly superior performance as compared to most phones in this price bracket. (For benchmark scores, please refer to the logsheet at the end of the review). One thing clearly helping this is the well-optimized Optimus 2.0 UI that sits on the Android 2.3.4 (Gingerbread) OS. We have often said that HTC Sense UI is by far the most visually appealing skin wrapped around Android, but we also can say for a fact that it does hinder performance to a certain degree, more with the older versions and lesser with the newer Sense. You can, at home can confirm this on your HTC phone by installing Launcher Pro and using that as the default home for a few days. Coming back to the Optimus UI, it is acceptable that it doesn’t have the HTC Sense’s visual punch, but still comes quite close. The variety of widgets is impressive, and the UI has a neat look throughout. Similar treatment to the apps list that we saw in the Optimus 2X and the Optimus 3D - a separate cluster for the apps that you download. We think that is quite neat, particularly if you download lots of them and they tend to get mixed up with the preloaded ones.

The 3.8-inch display is the Ultra AMOLED type with a resolution of 480 x 800 pixels. As witnessed with the two Optimus series phones we had reviewed earlier, the brightness range of the display is excellent, so much so that of not set properly in accordance with your eyes, it’ll become quite uncomfortable. We like the colour depth, and the fact that different but relatively similar shades of the same colourcan be distinctly identified is something that should be appreciated. Somehow, we weren’t very comfortable using the on-screen keypad in portrait mode. While the key size could have been a little bigger, the larger problem lies with the surprising lack of precision. While you are certain that your finger is pressing the correct key, it is actually flirting with the neighbor! Things improve a bit in landscape mode, but even then, you cannot type out an SMS quickly, without rechecking the spellings.

The 5MP camera is a pretty decent clicker, meant for the casual photographer only. The lack of flash means any shots outdoors after sundown aren’t possible, and indoor shots will need adequate lighting. When you can click pictures however, they are quite okay. There isn't a lot of noise, but that is because the images have soft edges and the lack of sharpness is evident the moment you zoom in.

Call quality of the Optimus Sol impressed us quite a bit. The earpiece is loud and clear, and tends to hide away quite a bit of ambient noise around the calling party. The speaker is loud as well, but tends to jar a bit when playing music at volumes above 80%. As expected, the speaker has a sharp sound, which means it’ll be used for music only when really needed.

While the phone has a 1540mAh battery, the backup time isn't very good. With the web services syncing in the background, and a bit of calling and messaging, the Optimus Sol will just about last a day. Any heavier usage, and you will need to carry a charger.

Our Take
For a price of Rs 19000, the Optimus Sol is a very competent mid range Android phone. The understated looks may not appeal to those who have been inspired by the likes of the Defy and the Lumia 710, but this retains a lot of functionality in the understated looks. Dare we say that it looks to follow a similar design theme as the Samsung Galaxy S?The performance is quite impressive, with the only issue being a disappointing battery for heavy users.