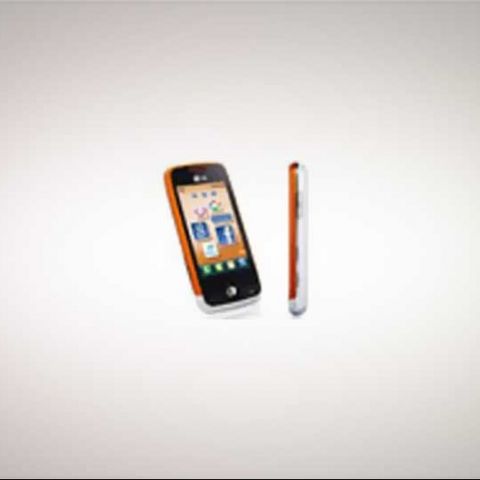 Available for Rs. 6,000 on the street, the GS290 offers serious value for money, and should be considered by anyone looking for an affordable touch screen handset.

LG has made an attempt to shift its classification of the cookie from being a multimedia phone to a 24 x 7 social networking phone to cater to the ever-growing popularity of online social networking sites. The new LG Cookie Fresh or GS290 packs almost all the social networking elements in a sleek, vibrantly coloured, lightweight handset. The whole look and feel of the phone is plasticky with a metallic finish. It basically comes in two colours, orange and blue, that cover the front half of the phone from 3 sides. Its overall build quality is pretty sturdy and the phone doesn’t feel flimsy when held.

It uses a 3.0-inch resistive touch screen with a wide bezel that sports the LG logo that could have been avoided, to make the handset compacter. And the screen could have been a little larger as this is a touch-only device. The button placement is nice and comfortable with the volume up and down buttons on the left side which can also be used to switch between silent or regular profile and for changing the touch tones. Also on the left side is the microSD card slot that can support up to 8 GB of memory. On the right side we have a keypad lock/unlock button and a camera button that can be used to launch the camera. Just below the screen it has a call receive button, an application button that gives a list of applications that are running in the background and a list of favorite applications that can be edited by the used. The call end button also doubles up as a power on/off key. 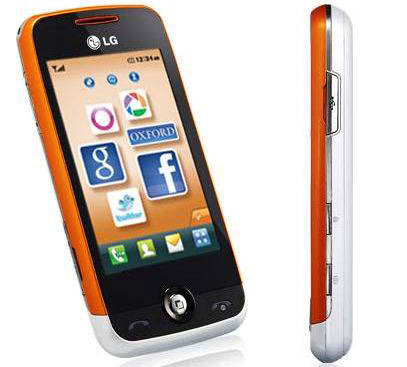 Since its being targeted as a social networking device one would expect it to have an interface that is fast and comfortable. Which this phone does not! The resistive touch display is very laggy and the virtual QWERTY keypad is very cramped because of the limited screen size and covers up almost two thirds of the display leaving very little space for the user to see what he is typing. The return button is also placed in such a way then every time we went to delete a character the back key would automatically get hit instead of the delete key. Although its UI does have kinetic scrolling this helps the user scroll through long lists with ease.

It features three home screens, each with its own purpose. The main screen basically gives information like new messages or missed calls. The second home screen features various widgets like calendar or social networking applications like Facebook or Flickr which the user can customize according to his own choice. The third screen can create avatars that basically unify all contact information of particular contracts and converges all updates from that person into one avatar. The menu is fairly easy to use and features two screens that contain all the applications and settings. And once the phone is locked one can draw certain gestures to access certain applications without having to unlock the phone.

On to music playback, the output from the phone is pretty nice but the earphones that come bundled with the phone have absolutely no bass at all. The sound is very sharp and at loud volumes can hurt. The earphones could have been a little less bright. Since it can support 8 GB of memory we wanted to load the device up with music but unfortunately the data transfer speed from a PC to the memory card was very slow. The data transfer rate was about 300 kilobytes per second. Another disadvantage was that the phone features could not be accessed while it was connected to the PC. So one would have to leave the phone when transferring music of data from or to the device. The data transfer speed for Bluetooth was pretty satisfactory at about 115 kilobytes per second.

The overall camera quality in a well lit indoor environment was pretty satisfactory with slight blurring if the hand is unstable. The noise level in the picture was also quiet prominent. In areas where there was less lighting the whole picture appeared to have been taken n complete darkness with shadows all over the frame. Barely anything was visible in the picture. The camera interface is very simple and provides no confusion when using. It also provides information like remaining shots, picture quality and to the left it has different settings. Video recording was very simple and judder free. There was no lag when recording or playing the video back. To switch between still and video it has a small slide animation that the user can use to slide the switch up or down to change between still or video recording.
Call clarity is so-so. In zone one we faced no issues, in zone two we had an issue of crackling that was slightly noticeable. Zone three saw the Cookie Fresh disconnect calls twice, and also there was a bit of distortion on the line, accompanied by a lot of noise.

With an MRP of 7,500 the LG GS290 you might think it costly, but it’s available for Rs. 6,000 or thereabouts on the street, not a bad price for a mediocre device. It has got an extensive feature list, and is only slightly behind the LG Cookie Plus in terms of features and performance, though price difference is near 20 per cent.