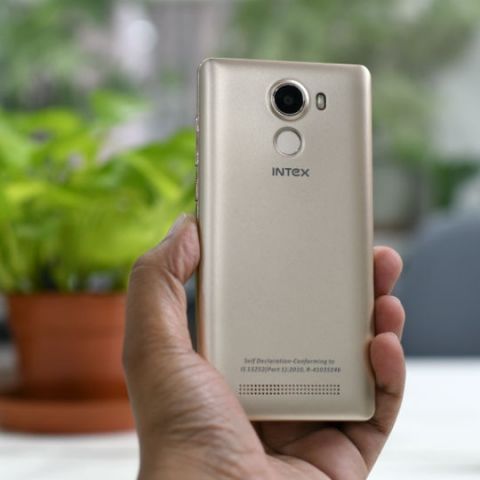 The Intex Aqua Secure is not a good phone and I would suggest you skip this all together.

Budget smartphones have evolved very rapidly over the past three to four years. I am talking, not only about performance, but the features they are bringing to the table. Especially, better cameras and security features such as fingerprint scanners. Talking of fingerprint scanners, this technology has been around for quite some time now, but it has trickled down to the budget smartphone segment quite recently. Intex has made the technology even more accessible and affordable with the Intex Aqua Secure smartphone. The rather small phone(screen size is 4.5-inch) offers a fingerprint scanner at its back, and costs approximately Rs. 6,000. It is now the cheapest smartphone to offer a fingerprint scanner, but should you spend your money on it? Let’s take the phone through its paces to find out.

Build and Design
Intex Aqua Secure does not feel good in the hand. Its build is primarily plastic and not a good one at that. The scratch prone plastic build, combined with the lack of Gorilla Glass, does not inspire much confidence in the design of the phone. Intex has also tried a different design approach for the phone, and given it an extended body, but it seems out of place and unnecessary here. That said, I have seen better interpretations of this ‘chin’ design in the past, like the HTC One V. Further, the two physical buttons, power key and volume rocker controls are not as tactile as I was hoping for. 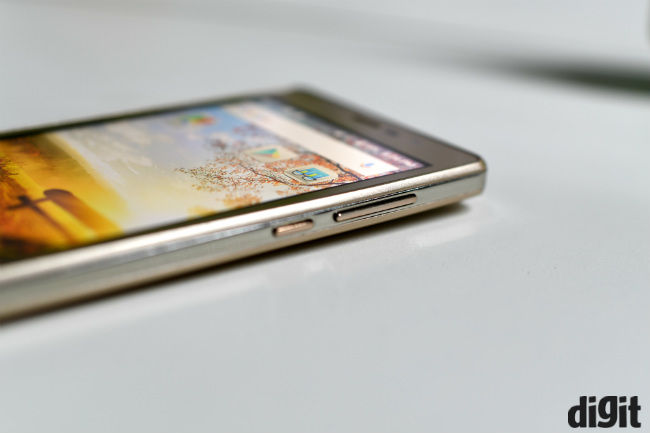 One peculiar thing which the phone features is a “lightning” style USB port, which prior to this has only been seen on an iPhone. While we will talk about the battery later in this review, it should be mentioned that you can’t easily find a spare charging cable, If you leave yours at home or break it by chance. Also, you can’t charge the iPhone with that cable, we checked. 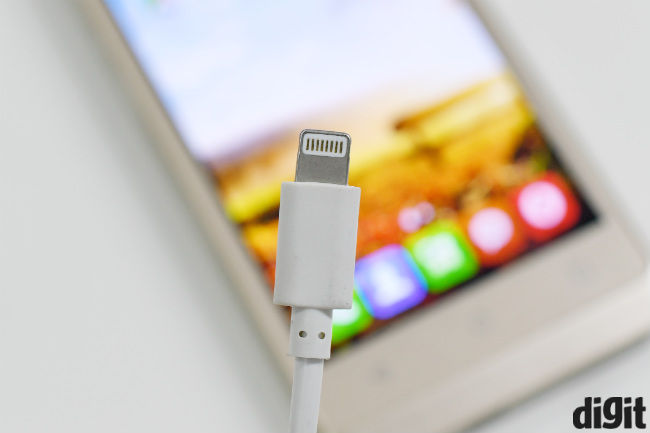 Display and UI
While all new and upcoming phones are offering at least an HD display, Intex has taken a step back and the Aqua Secure settles for a 854 x 480p display resolution. While the IPS panel is able to provide decent viewing angles, the colour saturation is off the mark. The cost cutting further continues, as there is no protective glass coating on the display, although the touch response is still quite good for the price. 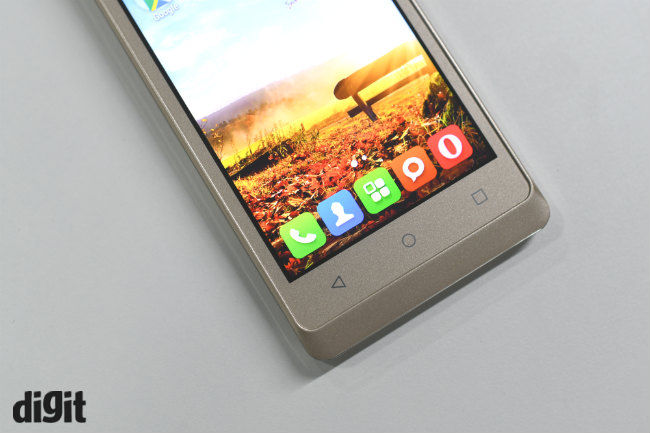 While the display is not very likeable, the UI of the phone only adds further to the phone’s troubles. The UI feels old, clunky and rather sluggish at times. The unorthodox navigation instructions will also require some time to get used to. The home button doubles-up as recent button when long pressed and the recent button pulls up the option menu. There are about half a dozen pre-loaded apps, and the phone persistently prompts users to install apps suggested by the built-in curator app. Further the icons on the UI seem quite ‘inspired’ from various other UIs. 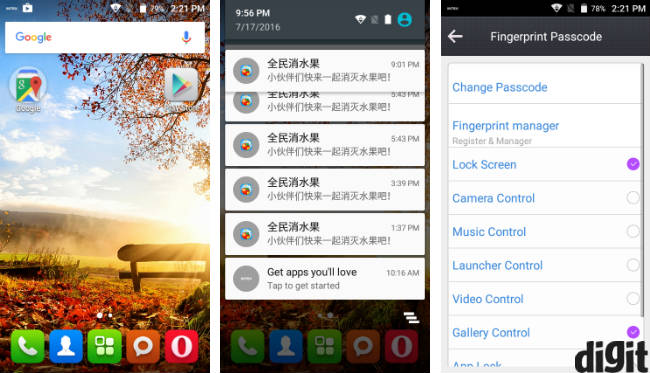 The fingerprint scanner which is the main feature of this phone works quite well, albeit with noticeable delay. Also, you can lock apps with the fingerprint sensor, which is a good feature for customers who require more privacy.

Performance
With a 1GHz quad-core SoC running the phone, the Intex Aqua Secure is underpowered compared to the competition. The phone lags and stutters, no matter what app you might want to use on the phone. The 1GB of RAM and 8GB of internal storage are also not enough to give you an optimal Android experience, although first time smartphone users or light users may not find the performance constrictive. Gaming on the phone, needless to say, is not that good and I found the phone constantly stuttering, skipping frames and not able to keep up with graphics in Asphalt 8: Airborne. Here is how the phone fared in synthetic benchmarks. 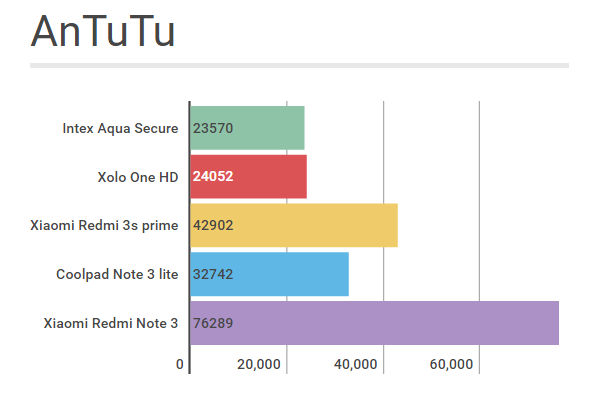 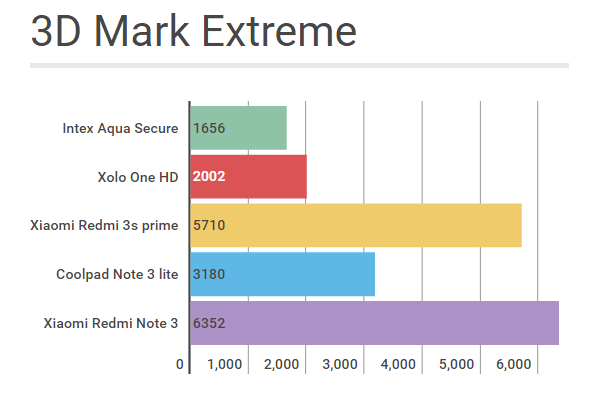 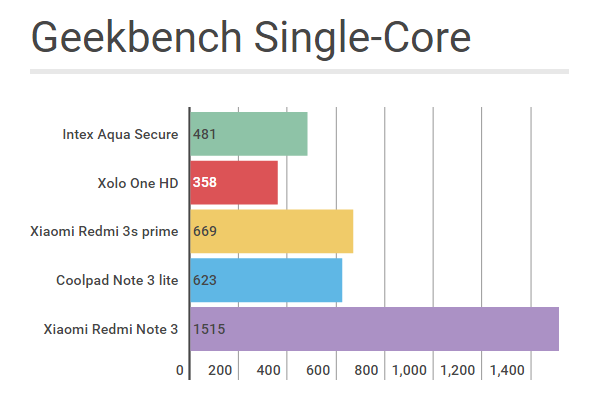 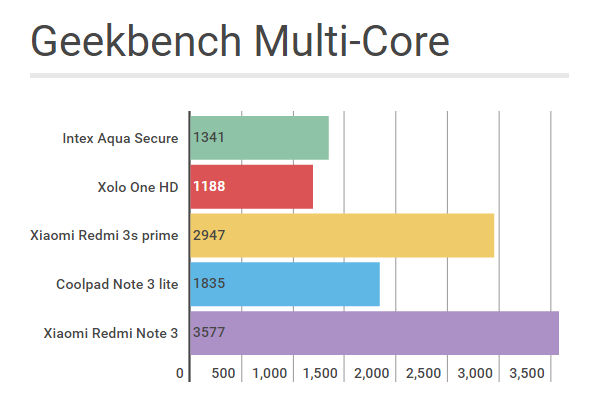 Call quality was pretty average, but the phone has a tendency to heat up during calls and gaming. After just 15 mins of gaming, I recorded about 42 degree celsius around the back of the phone, making it uncomfortable to hold. 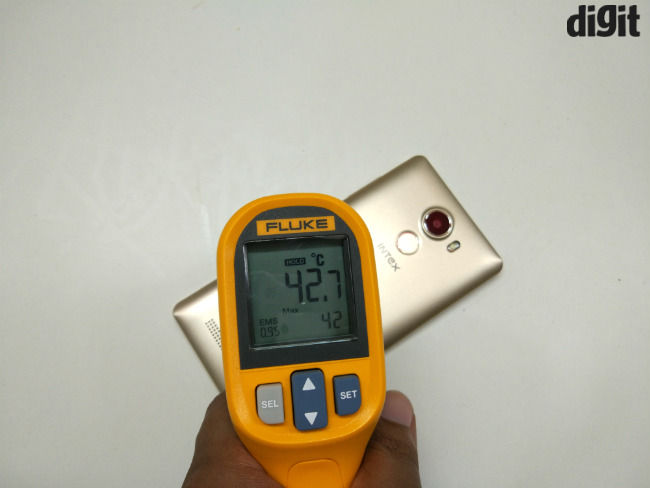 Camera
Like the performance, the 5MP rear camera on the Aqua Secure is way too short to be called good. Images taken in normal lighting conditions look quite washed out and are low on details. The dynamic range is sub-par and the autofocus takes some time to focus. Low light images are worse and almost unusable. The front facing camera is good enough to do video calls only under good lighting, but don't expect it to take good selfies.

Battery
The 1900mAh battery pack on the phone is not the best we have seen lately. Using a 4G SIM with the phone, it barely lasted for half a day, with bare minimum use, that included chatting on WhatsApp, using Facebook, streaming videos on YouTube, using the camera for a while and receiving a few calls. If you try to play smaller games on it, the battery percentage plummets really quickly, losing around 20% of the charge in just half an hour of gaming. 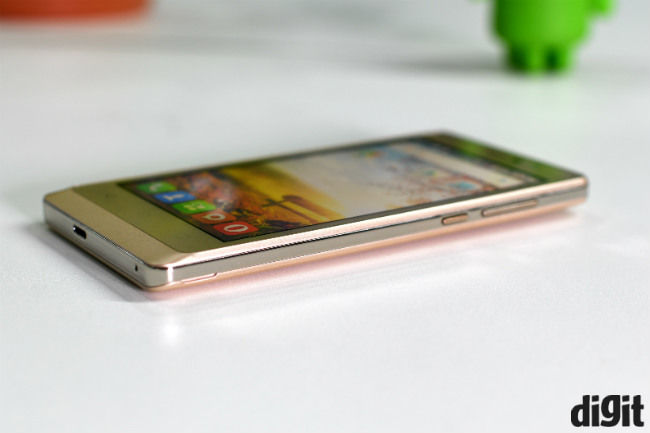 Should you buy it or not?
The Intex Aqua Secure may have a fingerprint sensor at an affordable price, but the rest of the phone is not up to the mark. The screen is bad, the build could have been better and the performance is substantially lower than what we have come to see from budget smartphones. Hence, this should not be your choice for a budget phone. Instead, I would suggest you go for the Xiaomi Redmi 3s, which is slightly costlier over the Intex Aqua Secure but a way better phone.