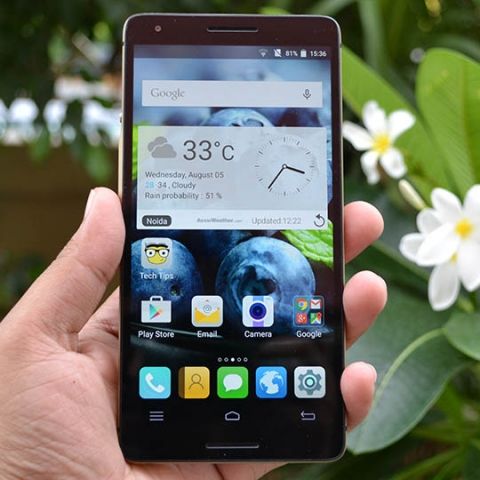 It seems InFocus has worked on making its large screen phones feature a more compact form factor, but the InFocus M810 is still difficult for one-handed usage. The shiny gold rear is a magnet for fingerprints, and the finish itself might not sit well with a lot. But leaving looks and ease of usage to personal opinions, the M810 is a steady performer that performs daily tasks with ease, and takes heavier tasks like games and continued photo editing with confidence. There is not much to complain about performance and display, and even the camera is reasonably decent. But, a sub-par audio quality and weak battery life can be two major detractors. Previously at Rs. 14,999, we would have recommend the Xiaomi Mi 4 (16GB) over the InFocus M810, but with a price cut today, the InFocus M810 is a promising overall smartphone at Rs. 12,999.

The InFocus M810 is the third smartphone by InFocus that we got our hands on, and the fifth in its present list of cellphones up for sale in India, until it releases the recently unveiled line up of phones in September. The InFocus M810 is a visible change in design from the previous phones, featuring a slimmer profile and a shiny gold finish at the back. Upon first impression, it looked a lot like a Sony Xperia smartphone from the back, but any resemblances stop there.

BUILD and DESIGN
Design-wise, InFocus has done a nice job in making the M810 look, and feel like a ‘premium’ smartphone. The shiny gold fiberglass back is complemented by the display that's surrounded by black bezels till the edge of the screen. There is a matte gold metal rim around its sides, with a really nice, muted finish to it. Two black bands are visible on the rim, which also houses the circular, Sony-ish power/unlock button, and the volume rocker placed on a slightly raised, contoured platform on the left side. The bottom of the phone has the 3.5mm audio jack and the microUSB charging port. 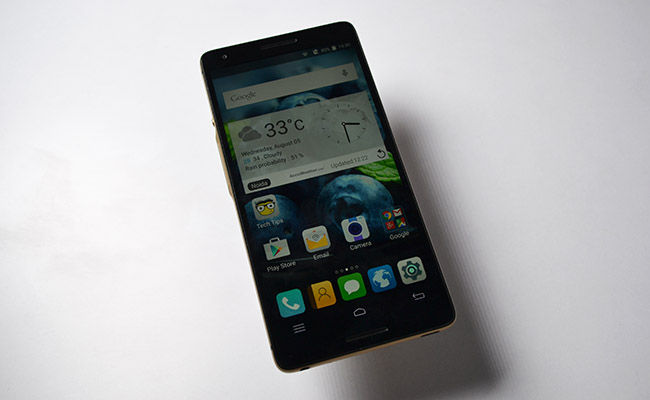 The InFocus M810 is much better designed than the InFocus M530. It has a slightly underplayed tone that sits well with the overall build. The shiny back, personally saying, ruins the overall design. Build-wise, it feels quite steady, although the glass back is a cause of major concern. Apart, from the chance of cracking due to accidental falls, it is a major fingerprint magnet, and making the phone look its best is quite a job on the user’s part. A surprising digression from the overall good build of the InFocus M810 are its power button, and the volume rocker, which feel quite wobbly. Although there is no flaw in their operations, they feel tacky, which contradicts the looks. 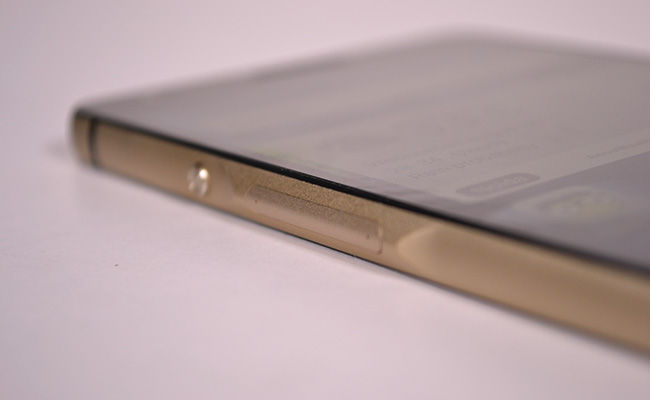 Much like the previous InFocus smartphones, the M810 is certainly not built for one-handed usage. It feels too big albeit slightly more convenient owing to its 6.99mm slim form factor. At 156 grams, it is even lighter than the InFocus M530, which weighed 176 grams. The multitasking, home, and return buttons are etched on the bezel just below the display, and light up when it's turned on. Overall, it does look its part in providing the feel of a premium smartphone to a user, and that is definitely an improvement over the M530, which looked somewhat boring.

DISPLAY and UI
The lack of contrast and sharpness on the InFocus M530’s display has been replaced by a nice, crisp display on the InFocus M810. The colours on the 5.5-inch 1080p IPS display look real, and there is adequate warmth, balanced with sharp contrast levels, which make images look good. Visibility under direct sunlight is decent, although not best in class. Watching films on the InFocus M810 is a good experience, owing to its well-balanced 1080p display. We played Persepolis on it, and the in-film colour reproductions on the display was quite pleasing. Viewing angles, however, seem slightly compromised, with a marginal yet visible shift in colour paradigm in the higher acute angles. It does not hamper regular usage, though, and can only be noticed if you happen to slant your phone more than usual while watching a movie or looking at an image. 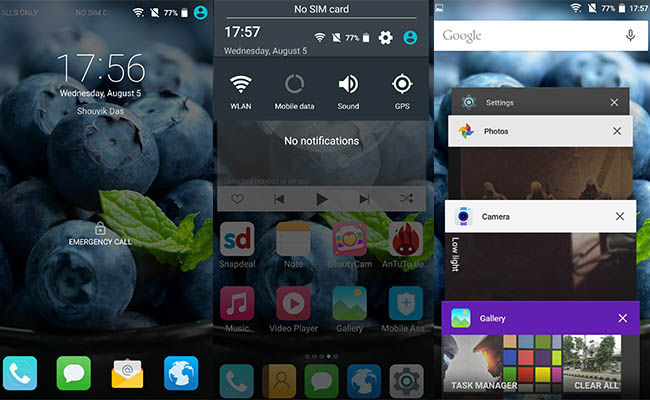 The InLife UI, however, has not changed yet. This is one aspect that we would love InFocus to change. While ease of usage, and the simplistic factor of the UI is a good aspect, Xiaomi’s MiUI looks like an ideal target of fusing visually appealing animations and graphics, with user-friendly layouts. In comparison to the other interfaces out in the market, the InLife UI on the InFocus M810 looks outdated and massively outshined. The InLife UI retains the notification panel from stock Android, changing the rest of the aspects like icons and in-menu appearances. Despite its simplicity, there are occasional stutters that we faced with the InLife UI. Since there were no real lags in gaming, browsing, regular calling/texting and watching a film with tasks running in the background, we can incur that it might be some glitch in the InLife UI, which InFocus has stated to be under revamp.

PERFORMANCE and BATTERY
The InFocus M810, like its predecessor, is a really good performer. It runs on a Qualcomm Snapdragon 801 quad-core processor clocked at 2.5GHz, which is teamed with 2GB of RAM, 16GB of internal storage, and Adreno 330 GPU. It runs Android Lollipop v5.0.2, and performs ably, barring a few, occasional hiccups (mentioned above, with the UI). Surfing the internet while on a call, with an application being downloaded in the background, was smooth, and extended usage presented no issues except for a massive battery drain. Somehow, the device heats up slightly more than it should. The Xiaomi Mi 4, which runs on the same processor with 3GB of RAM, carries out same tasks minus the slight overheating, and lesser battery consumption. 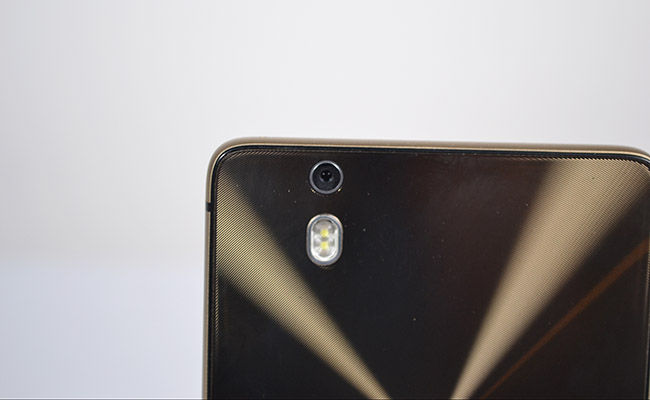 We played CSR Racing without any lag whatsoever. The graphic-intensive drag racing game ran smoothly, and rendered really good graphics. Although certain levels seemed to lag slightly, it wasn’t specific to the InFocus M810, and similar lags occurred on the Mi 4, as well as the much higher-priced HTC One ME. Assassin’s Creed: Pirates rendered good graphics too, along with smooth gameplay. Among other games, we played Voxel Rush and Angry Birds 2, both of which presented no issues either. Synthetic benchmark tests run on the InFocus M810 also echoed its good performance, which you can see in the graph presented below.

Switching to the regular tasks, calling performance was good, and voice on the earpiece is clear. We did not experience many signal drops either, and both 3G and wifi reception were stable. Surfing the internet, browsing through social media timelines and regular messaging tasks are fluent - as fluent as you would like. But what really pegs the InFocus M810 down (even overlooking the dull UI) are its poor battery optimization, and imbalanced audio quality and volume. The in-phone speakers have a tunnel-like noise ambience effect added to the audio, and the audio is distorted. It saves itself from being abysmal by tackling relatively clear highs, which drive along a song’s vocals and instruments, with a very vivid absence of bass. 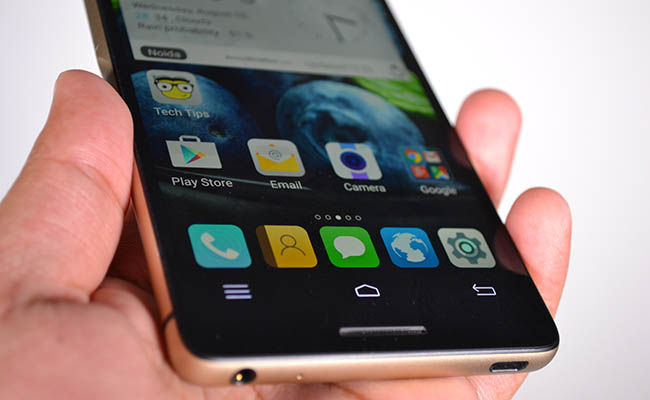 A more concerning factor here is the battery drain. Without connecting to any networks, the InFocus M810 saw a battery drop from 66% to 51% in just half an hour of listening to music. Our battery test also revealed a battery life of 5.3 hours: not even average. In all probabilities, you will most certainly need to carry a portable charger around, if you would be using the InFocus M810 for anything more than calls and texts. Its primary competitor, the Xiaomi Mi 4 that we have pitted it against, isn’t a great winner in battery tests either. However, the Mi 4’s quick charging capabilities juice-up the battery much faster than what the InFocus M810 is capable of, which still provides some arguable advantage in terms of battery stamina. For Snapdragon 801-powered devices at similar pricing, the OnePlus One takes all the accolades here, for being similarly excellent in performance with almost double battery life.

CAMERA
The InFocus M810’s primary camera houses a 13-megapixel Sony Exmor R CMOS sensor with f-stop number of f/2.2, coupled with dual-LED flash. It can also record 1080p videos at 30fps. The front camera, unlike the InFocus M530, is a 5-megapixel one doubling-up with 720p 30fps video-recording capabilities. The primary camera gets a standard HDR shooting mode, although photo quality is nowhere nearly as good as the InFocus M530. Shooting photographs in daylight is decent at its best, and low light photography is just about average. Even the shutter response is not the fastest, which means that the InFocus M810 has a very average camera performance. We leave the sample images taken in different lighting conditions for you to judge.

BOTTOMLINE
The InFocus M810 is essentially a visual and monetary upgrade over the previous M530. In fact, with its non-chalant introduction into the Indian market, it almost feels like InFocus only did a half-hearted attempt at making the M810 a late, but worthy challenger to the excellent sub-15k Android smartphones in the market now. It does feature a better form factor, along with a better display. Previously at Rs. 14,999, it was difficult to recommend the InFocus M810 over the 16GB variant of the Xiaomi Mi 4. Both the phones had the same price tag, same amount of internal storage, and ran on the same processor, but the Mi 4 features a superior UI, one extra gigabyte of RAM, equally good performance and display, along with much better camera, audio, longer battery life, and a much more compact and ergonomic build.