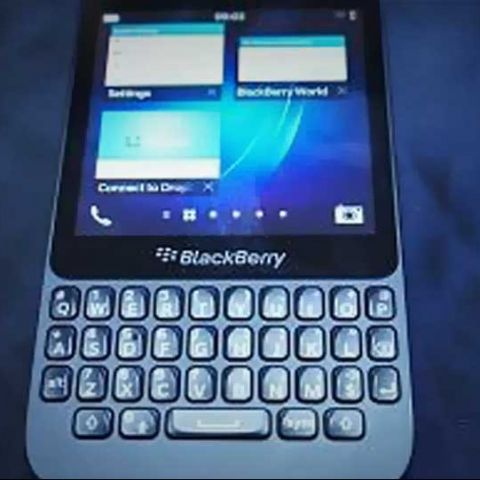 The Q5 is a tad more expensive than what the sweet spot would have been - somewhere around the Rs. 20,000 mark. It's a must buy for those who desperately want a BlackBerry 10 device, but for whom the Q10 is out of budget. Otherwise, for the same amount of money, a few Android phones and the Apple iPhone 4 (if you don't mind the old phone) will offer better application variety and usage experience.

BlackBerry’s bet on the BB10 operating system is pretty much what it is surviving on these days. After the flagship Z10 and the Q10 smartphones, now it is time for the more affordable Q5. But, affordability remains something of a subjective matter now!

Build & Design
BlackBerry had kept things very minimalistic and understated in the first two BB10 phones. Now, the trend continues with the third one as well, if only, taking a step further! To be honest, it has been ages since we actually saw a phone as minimalistic and plain-Jane as the Q5. Take it out of the box, and the front bears a 3.1-inch touchscreen which sits with the full QWERTY keyboard. BlackBerry users of old would immediately notice something is missing. That is the gamut of keys seen on BB phones till now - the optical trackpad, the menu key, call connect / disconnect and the back key. However, with BB10 and the touchscreen, all those functions are now a part of the gestures on the UI. 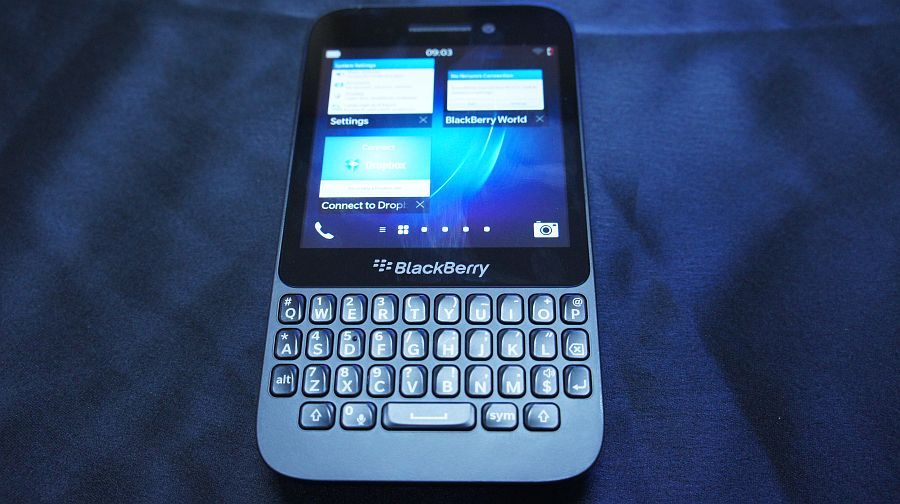 This particular fact does pose a slight learning curve for some users, and a steep learning curve for those who are the hardcore BB users. With the BlackBerry Q5, it just feels somewhat uncomfortable to switch between the touchscreen and the QWERTY, particularly for tasks like emails and web browsing. However, a QWERTY is what you chose, and a QWERTY is what you shall get!

The BlackBerry Q5’s right side spine has the volume rocker, which doubles up as the media playback keys at the appropriate time. On the left spine is the flap, which double-backs on itself and opens up to reveal the memory card slot and the SIM card slot. We would suggest extreme caution when opening this, because it doesn’t open outward, but sort of curves back. On the top are the power key and the 3.5mm headphone jack.

Flip the Q5 over, and there is the clean back panel, with just the camera and the flash sitting at the top, towards one corner. The back is sealed, meaning no access to the battery.

The material used throughout is all plastic, but fairly good quality. I mean, we have no complaints regarding the build quality, the materials used, or how the phone feels at the end of it all. Yes, the phone doesn’t feel royal or expensive, but it is clearly meant to do a job, and that is what it is doing. 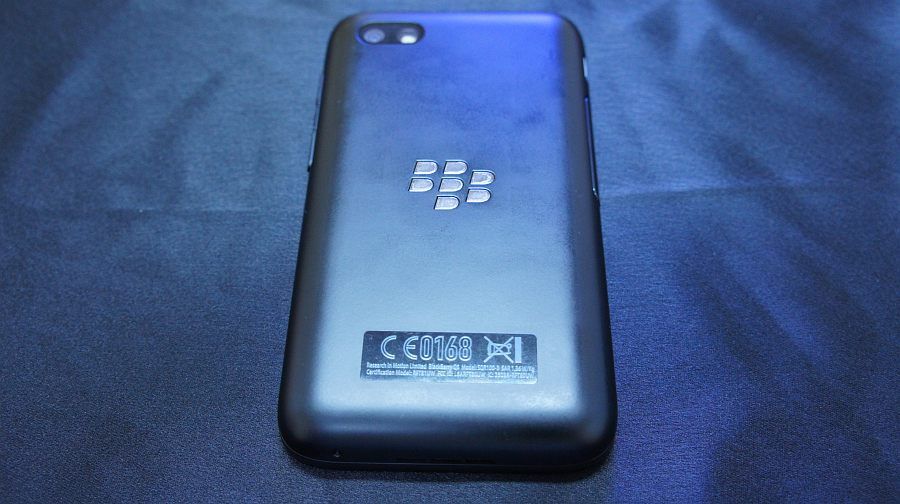 Display: Impressive
While this isn’t a big display, the kinds we have been spoilt with recently, the BlackBerry Q5’s 3.1-inch visual real estate is impressive, irrespective of how you look at it. The resolution of 720 x 720 pixels is decent enough for this screen size, bringing the pixel density to a mid-range 329ppi. The result is simple - the colour richness is even, the text is crisp and easy to read, and the display overall is quite bright. Compared to the Q10’s display, the Q5’s display has slightly more even and natural colours, and I may be completely wrong here because I may be considered blind, but the text also looks better to read on the the Q5’s screen. We compared between the two using the same web page on the browser between the two phones, and the Q5, despite its budget roots, seems to be doing a better job. 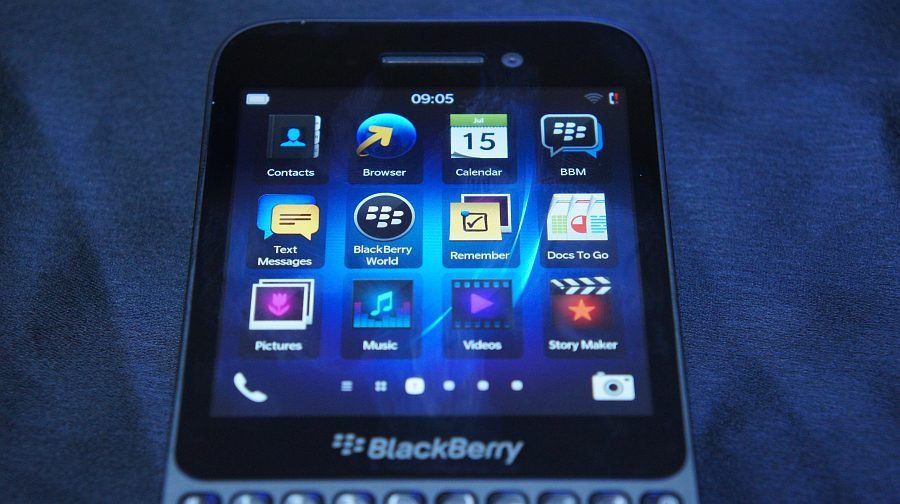 What also helps is the fact that the BlackBerry Q5’s screen has a square aspect ratio, 1:1 if you like numbers, and isn’t pandering to the whole widescreen thing. The drawback is that you won’t really like this screen for watching videos or websites that are heavy on visual effects.

Keyboard: No Pretensions
This is what those who have bought the Q5 (or are considering it) are buying and considering it for. The keyboard is the primary thing that traditional BlackBerry lovers will be attracted to, with the lure of an upgrade. And this keyboard truly does the job. For starters, the straight-line layout and design is something that will become standard with BB10 phones, unlike the curved keyboard layouts seen with the Curve and Bold series of phones till now. Admittedly, it doesn’t enhance the typing experience or speed in any way, but it doesn’t have any sort of detrimental effect either. 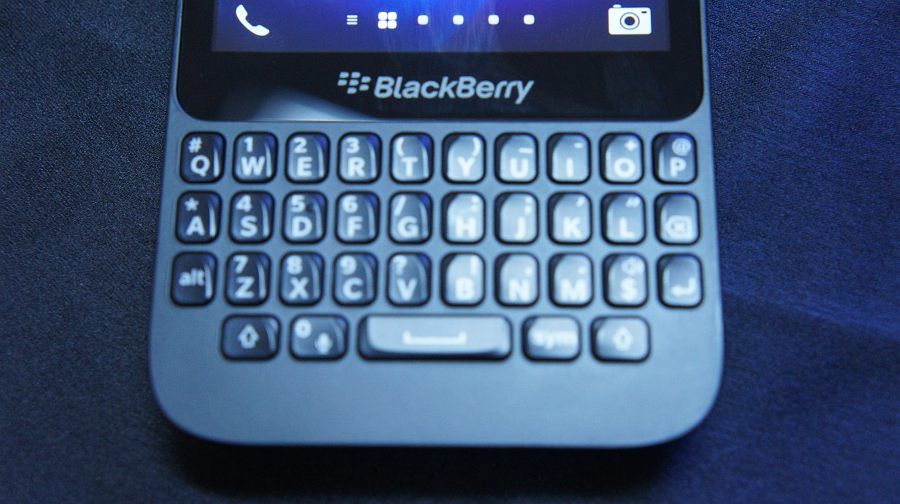 Unlike the Q10, the keyboard on the Q5 is slightly more spaced out, with considerable spacing between each key. This is completely different from the layout on the Q10, which can be considered the successor to the Bold Touch 9900’s keyboard. Both have their fans, and their advantages, but anyone who doesn’t take to typing quickly like fish to water would prefer the extra space afforded for each alphabet.

All in all, the BlackBerry Q5 has a very comfortable keyboard to type on, and for all the hype about straight laid-out keyboards, we find that this and the predecessor were almost the same in terms of experience.

Software & UI: Cannot Get Lost!
The UI, as exact as it can be, has been replicated across all BB10 phones. Yes, we appreciate that vision, because it has been implemented well. Anyone using the Z10 will not get lost while using the Q10 or the Q5. The phone starts with the first page of the app drawer, and you scroll horizontally to move between the app list. Scroll extreme left, beyond the first page of the apps, and that is where the BlackBerry Hub sits. Open an app or two, and the same widget treatment is given to them on a newly opened screen, which now becomes the default home screen. This does pose a problem of “there is no one home screen”, and that leads to a familiarity issue which can confuse users before they understand what is happening. Open an app, use it, minimize it, and it you are taken to the multi-tasking page. You need to scroll through the app drawer again, if you wish to open another app.

The Hub is a very neat app to have, which brings all the messages and notifications in one place - missed calls, mails, messages, social network updates, PIN messages and even WhatsApp. You can go into each tab to see the message, read it there itself and return. No need to open each app individually to get rid of the notifications. With the recent update, you can even post Facebook and Twitter updates from within the Hub.

Performance: Can't Compare Berries with Jelly Beans
Android users tend to scoff at almost every other phone and its hardware specifications. The BlackBerry Q5 packs in a dual-core 1.2GHz processor, along with 2GB of RAM. Most Android phones in the Rs 22k-Rs 25k price band may boast of higher processor clock speeds, but are still stuck with 1GB of RAM. The extra RAM on the Q5 greatly benefits multi-tasking, because the phone didn’t feel the weight even though we had 5 apps open in the background at the same time. The phone feels willing to respond to the command to open an app, and doesn’t feel sluggish at all. Having said that, apps like Facebook and Twitter are rather clunky, and tend to crash quite often. That is something that can be solved by app updates, and has nothing to do with the BB10 OS.

Before anyone starts comparing apples to oranges, or in this case berries to some frozen food items, it is important to note that BB10 does not need higher processor clock speeds to work efficiently, something Android does. If that is one of the points Windows Phone was given a lot of back patting for, then why discriminate against BB10? BlackBerry has done some good work to make this OS work smoothly even with a 1.2GHz dual core processor, something most Android phones cannot boast of. This will give BB an advantage, the day it decides to make more affordable BB10 phones, allowing it more freedom with the hardware and specs.

Camera: Very Basic
The 5MP camera, as expected, is a very basic snapper. It will do a rather good job when the lighting conditions are good, or when you are shooting outdoors during daytime. The resulting images will be detailed, and fairly vivid. The colour aspect, particularly, is very impressive. But, the moment the lighting goes down, noise creeps in. The same holds true for videos as well, irrespective of what resolution you are shooting them at. What we miss is a dedicated camera key, or how you could use the optical trackpad in the older BB phones to click images. In this one, you need to tap on the screen to take the image, and more often than not, that disturbs the shot, making you refocus again. There are not too many settings that you can tweak, apart from changing between the modes - standard, Stabilization, Burst and HDR. You get three image ratio options - 1:1, 4:3 and 16:9. All in all, this is a surprisingly competent camera to have when the sun is out or the lights are switched on.

Battery Life: Good, Very!
BlackBerry has packed in a 2180mAh, which is the biggest in a BB10 phone till date. For those who love numbers, the Z10 started out in life with an 1800mAh battery packed in, while the Q10 got a 2100mAh pack. This will get you through two days as a primary phone, with 2 hours in total of voice calls, but 3G connected throughout with SMS and email syncs, WhatsApp and BBM chats and the occasional web browsing. This is, keeping all things considered, a fairly competent deal, in a day and age where most phones start the day at 100% battery but are crying for a recharge even before it is dinner time.

Buy or Not Buy: If You Really Want a BlackBerry
We’d say, buy the Q5 only if you have your heart set on a new BlackBerry phone, and the Q10 and the Z10 are outside the budget. But, be advised, if you are dabbling with the platform for the first time, there are quite a few app gaps that still need filling. For no fault of the phone or the hardware, the lack of apps is still an issue. For the same amount of money, you could also consider a LG Nexus 4 (Android) or the Apple iPhone 4 (iOS), since both will offer a better and richer app experience.