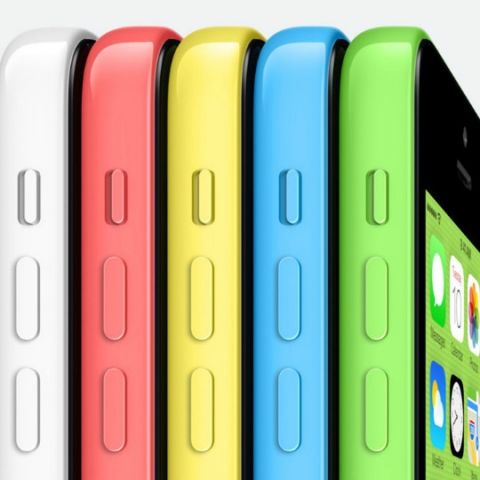 Not exactly low cost, is it? In the U.S., you may get the iPhone 5C at $99 with a two year contract, but in India, this is essentially replacing the iPhone 5. The aluminum iPhone 5, with the 'unapologetically plastic' shell. Pretty much the same internals and specs, but happily, you get a lot more colour options now. If only you can come to terms with a 'plastic' iPhone. Unless that is the primary criteria for you, we would suggest picking up the iPhone 5, while it is still available. Or work a tad harder, and pick up the iPhone 5s. Personally, for all its positives, being seen with an iPhone 5c could mean people knowing that you couldn't afford the iPhone 5s. Not many buy the "I like this colour" argument. But, if you are beyond the materialistic issues plaguing this world, the iPhone 5c is a very competent phone.

The iPhone 5c comes across as a completely new iPhone. In some ways it is, but for all other intents and purposes, this is pretty much the iPhone 5 under the hood. What's done away with is the aluminum, and in come the colourful “unapologetically plastic” shells. The rumor mill tried its best to keep us excited about the “cheap” iPhone, but this is anything but cheap at a price not very dissimilar to the price tag the iPhone 5 sported all along. But the big question is - does the iPhone 5c feel like an iPhone?

Build & Design: The dawn of a new era?
Clearly, an iPhone that doesn’t have the aluminum and glass will take some getting used to. But, there is a historical perspective to this as well - the whole plastic vs. Aluminum debate that has been raging on for years. iPhone users, for long, blasted Samsung and the use of plastic on the very popular range of Galaxy smartphones. Claiming that metal is a superior material to have on the phone. However, it seems the tide has turned, because the iPhone 5c has adopted the same polycarbonate material that was the subject of a lot of scorn.

The one good thing about this change is the availability of colour options - green, yellow, pink, blue and white. Anyone who has owned the earlier iPod Nano or the newer iPod Touch will be fairly well accustomed to the colour options.

There is no doubt that the polycarbonate used is very good quality, but it is in no way superior to the others, for the instance, the Nokia Lumia range of smartphones. Yes, there is undoubtedly the typical Apple-esque precision to the way the iPhone 5c has been put together. The power key has the same design as the iPhone 5’s key, and for those who appreciate the fine things in life, they will immediately realize that it doesn’t wriggle about - something a lot of Android phones cannot claim. Volume keys have been redesigned, and instead of the circular “ ” and “-”, they are now the same flat elongated design as the power key. 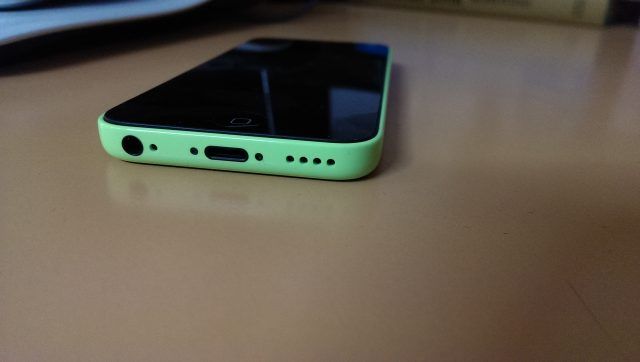 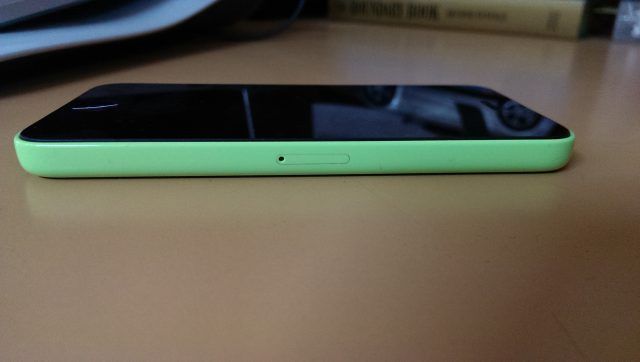 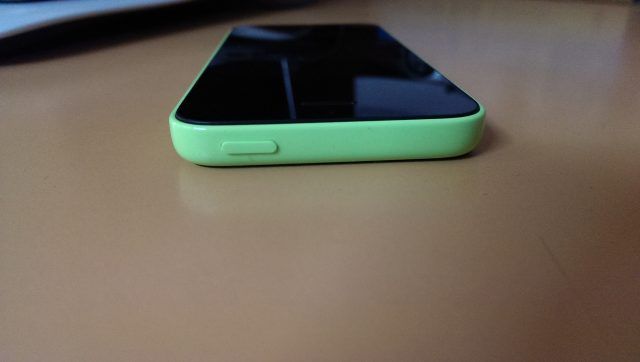 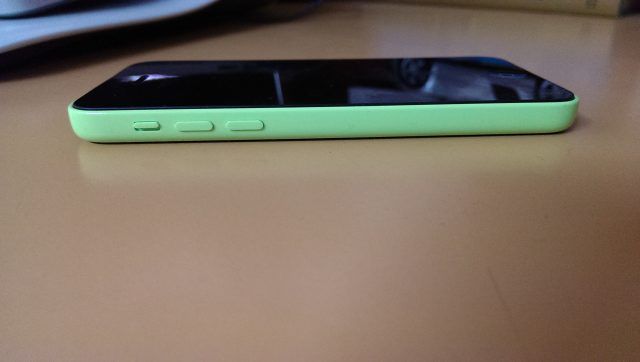 The 3.5mm headphone jack as well as the lightning port sit on the bottom spine, but unlike the iPhone 5 that has the speaker grill on both sides of the lightning port, the 5c has that on only one side. Flip the 5c over, and the traditional Apple logo takes center stage, and the camera flash combo sits towards the top left, just like on the iPhone 5.

Coming back to the main point of how it is to use a plastic iPhone. Critical, because I personally use an iPhone 5. First, the good thing is that the footprint of the 5c remains much like the 5. On paper, there are dimension differences, but in the hand, it feels equally comfortable to hold during single-hand operation. Secondly, while the polycarbonate isn’t as premium as aluminum, the finish isn’t exactly something that disappoints. Far from it, the iPhone 5c feels solid and well put together. The structural solidity can be attributed to the steel frame.The phone easily handled a couple of minor drops, and the panel did not get any scratches or nicks, despite traveling in the same pocket as another phone and additional accessories like a pen and a couple of coins. That, cannot be said, for even the most premium Android phones with the aluminum finish. The HTC One is a prime example, because it also catches a lot of nicks and scratches. Also, the iPhone 5 itself, catches a lot of scratches if you are not careful.

Before we move on, it's important to emphasize that while the dimension differences might be minimal, even the slightest changes and things like more curved spines mean most of your iPhone 5 cases and skins will not be compatible with the iPhone 5c. 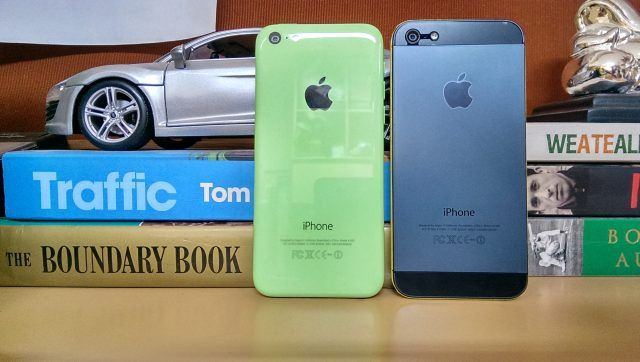 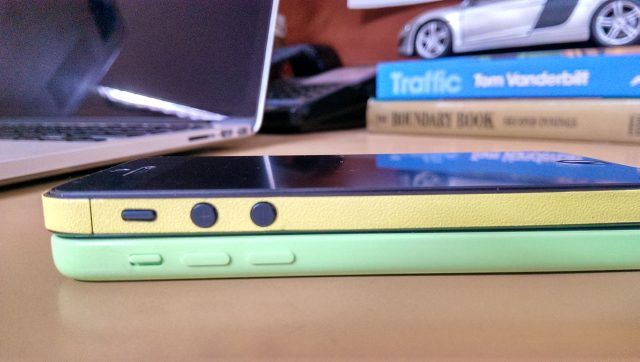 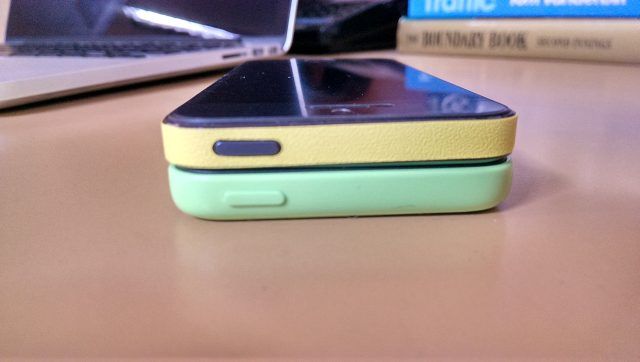 The only real issue, and this could purely be a subjective one, is the look of the phone. From afar. We have established and experienced that there is nothing wrong with the build quality, but there is the question of appearances. Personally, I believe it looks a bit run of the mill, and doesn’t have that iPhone-esque personna. Secondly, while it isn’t that, the 5c has been called the “cheap” iPhone a tad too often by a lot of people writing on the Internet. While you may be paying upwards of Rs 41,900 for the iPhone 5c, people may remember you as the person who couldn’t afford the iPhone 5s. And that can be a thorn in your side, for the duration you use the 5c in public.

If that is not an issue for you, we would recommend the iPhone 5c to anyone who wants a newer generation iPhone (compared to the iPhone 4 and the iPhone 4s that are still selling). The colour options could be just the thing for a lot of prospective buyers.

Is it any different from the iPhone 5?
Well, we just described the differences regarding the build and the feel of the phone. But, there are just too many similarities that hold us back from calling the iPhone 5c a “new” product - A6 processor, 8MP rear camera, 1.9 MP front camera, Wi-Fi and Bluetooth 4.0 - all the same between the 5c and the 5.

But, in compatible markets, the iPhone 5c is 4G enabled, meaning even more networks are supported globally.

I already own an iPhone....
Are you asking - should you upgrade? If yes, then you need to read this carefully. For anyone currently owning an iPhone 4 or iPhone 4s, the upgrade to the iPhone 5c makes sense. Even more so because there is currently an exchange scheme, which offers a discount on the 5c when you return your old phone. If you currently own an iPhone 5, the iPhone 5c is not much of an upgrade. Except that it has a newer “released on” date and year. The hardware remains pretty much the same, and why would anyone sacrifice the aluminum finish for the plastic one?

Performance
There really is nothing new in the performance aspect, to be brutally honest. With the same hardware inside, it was pretty much a question of validating the performance with the predecessor, more than anything else. 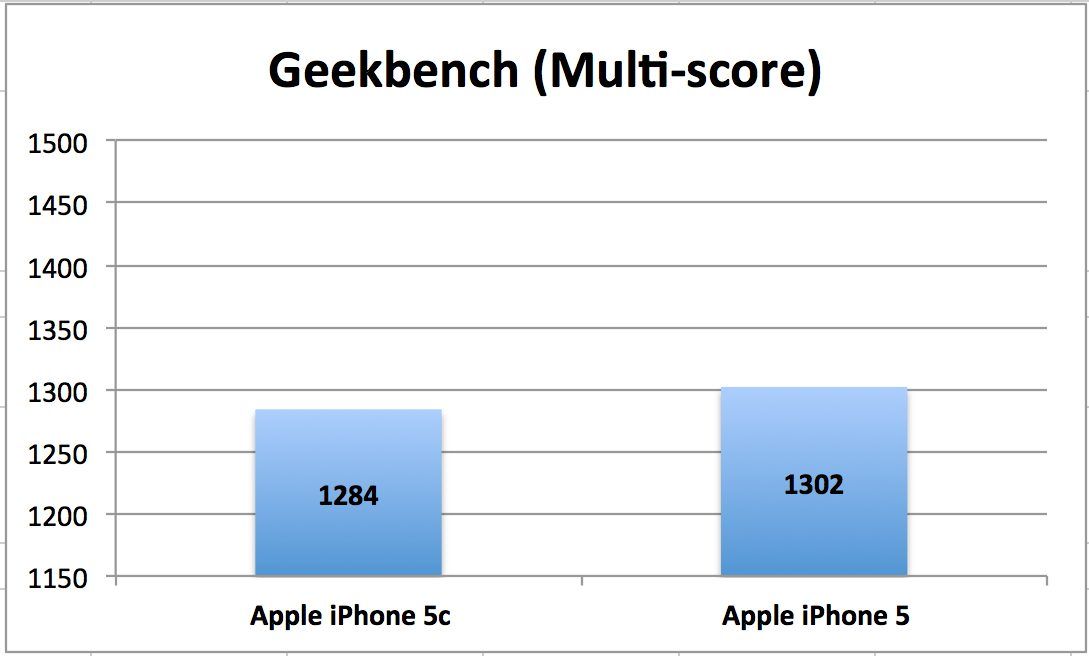 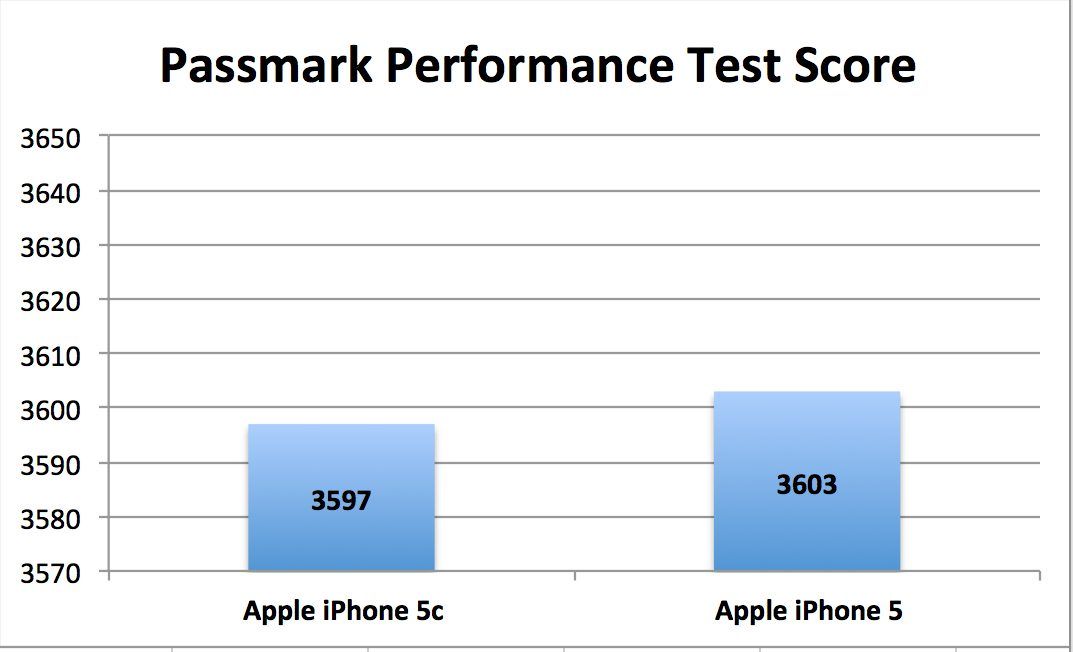 In the benchmark tests scores, it's surprising to see the iPhone 5c score a little lesser than the iPhone 5, both running iOS 7.0.4 at the time. However, the scores are still within the margin of error and there isn’t any performance deficit that you should be worried about. Such variations can be attributed to quite a few other factors as well, and rest assured, the real world usage experience on the iPhone 5c is exactly the same as the iPhone 5s.

Since I am using the iPhone 5 as my primary phone, it was rather simple and convenient to take a backup of the phone, and restore the image to the new phone. Additionally, if you don’t want to restore apps to the new phone, just use iCloud for contacts and notes. The experience was exactly the same - absolutely no difference. Apps open and close at the same speed, behave in the same way and the overall sense of familiarity was disconcertingly convenient! The only slight difference would possibly be the fact that the iPhone 5c heats up slightly below the Apple logo when stressed a bit, something the iPhone 5 does not, under the same load.

Signal reception and call quality is excellent. At certain places where we frequent, the Android flagships, the likes of the HTC One and the Sony Xperia Z1 would completely lose network reception, but the iPhone 5c retained connectivity. The only thing missing was 3G, replaced by strands of EDGE. The aluminum frame beneath the plastic additionally helps as the antenna, and is doing a visibly better job.

The 4-inch Retina Display (1136 x 640 pixels) still remains one of the better displays on smartphones till date, in terms of colour accuracy and brightness. However, a lot of Android phones offer 4.3-inch or 4.7-inch displays without feeling humongous in the hand. This is where a lot of users, who want a bigger screen, will get tuned out. Apple has to consider an iPhone with a bigger screen even if only to compete with Android flagships on the spec sheet.

While the iPhone 5c has a slightly bigger battery than the iPhone 5, I did not experience any improvement or degradation in the backup times my iPhone 5 already offers on a single charge. You can get through a day with absolute ease, and if you aren’t syncing a million mails and social networks, even two days of backup is very much possible.

The camera on the iPhone 5c is the same as the iPhone 5, but still remains one of the better smartphone cameras out there. Low light shots are no match for the  Nokia Lumia smartphones that boast of their photography prowess, or even the LG G2, but daytime and good light shots are extremely crisp and vivid.

On the left is the picture of the test scene in good light, and on the right is the image of the same test scene in low light conditions. In good light, the iPhone 5c camera does a very good job - crisp and vivid. However, the low light shot has extremely dark edges and the noise is quite visible. 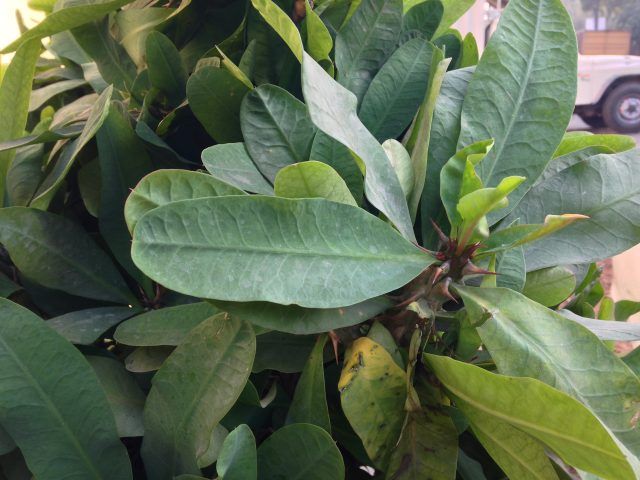 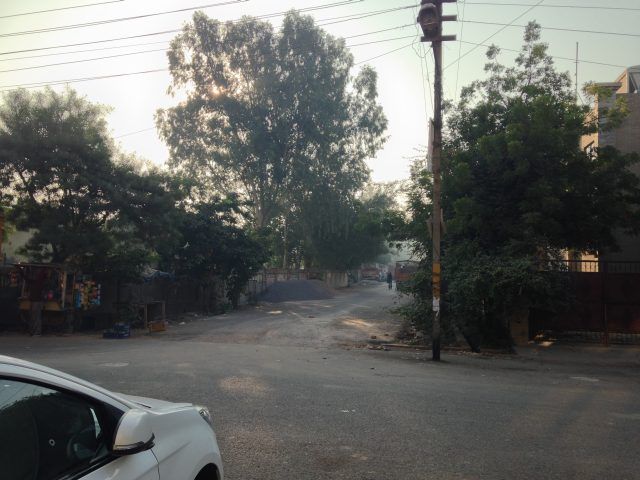 Two outdoor shots. The one on the left is impressive, with the amount of detailing and distinct colours visible on the leaves. Even that tiny red flower is clearly visible. The landscape shot on the right looks good, but when zoomed in a bit, the soft edges are quite apparent. 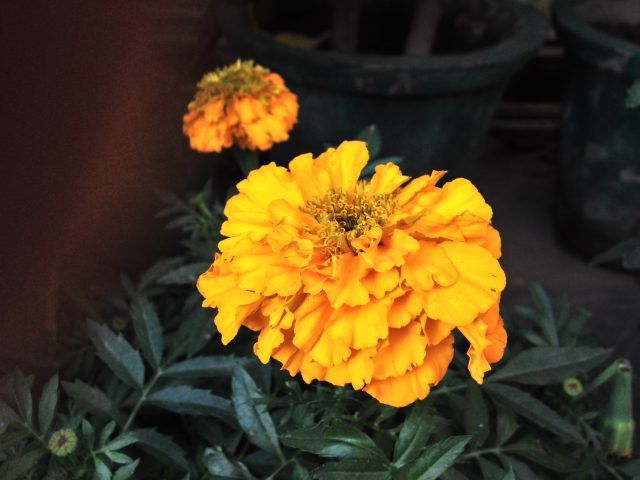 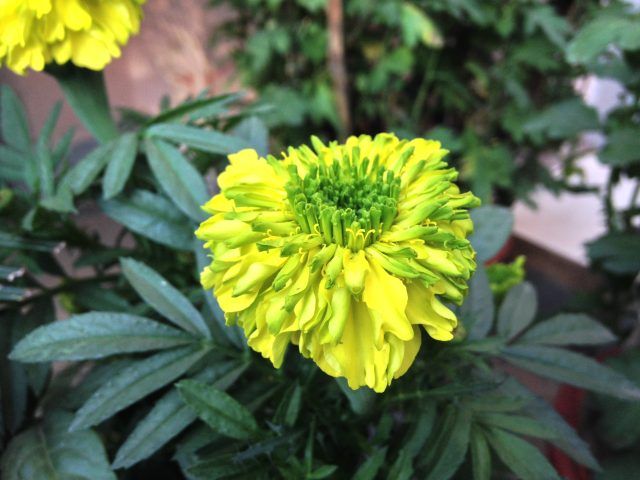 Two macro shots of different flowers, both outdoors. The detailing of each flower is impressive, and the different shades of orange and green respectively, are impressive. But, the edges are slightly soft. In the first image, the low-light background behind the orange flower has a little bit of noise.