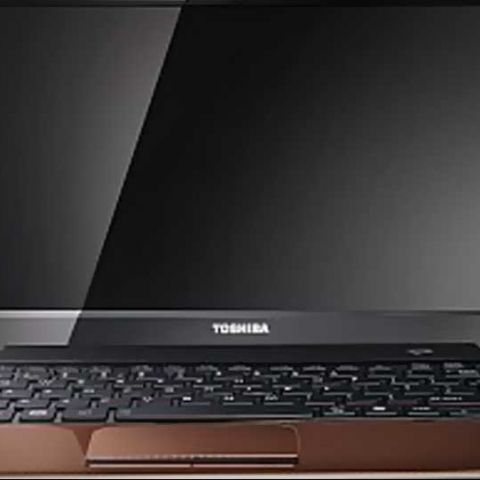 The Satellite M840 offers stable performance and a pretty good battery life, at price of around Rs. 40,000. Its slightly gaudy finish may put some people off. The M840 is meant purely for someone who will use it for the standard home and home-office usage scenarios, with literally no gaming capabilities to speak of.

The focus again seems to have shifted to the Rs. 40,000 to Rs. 50,000 price bracket, with the Toshiba Satellite M840 being the fourth straight laptop sent to us in that category.

Build & Design
Toshiba Satellite M840 is a case of two distinct halves – one brilliant, and the other not so. Straight out of the box, and the shiny golden brown colour will not impress everyone. It does have an imprint, but that will hardly impress those with a more formal bent of mind. The big Toshiba logo sits bang in the middle, but would have looked a lot better had it been slightly smaller. We had been saying this for quite some time now, but Toshiba hasn’t bothered changing it. The shiny nature of the golden colour doesn’t help appeal to everyone, but it is a surety that the Toshiba Satellite M840 will stand out in the midst of a crowd of those similar looking black and grey notebooks.

Open the Toshiba Satellite M840’s lid, and quite frankly, the combo of gold and black does look very good. The only unfortunate part is that the black is rather glossy, and being the area around the keypad, will inevitably get quite a few scratches. The island style keypad is quite comfortable. The touchpad sits in the golden zone, and looks exactly the same in terms of colour and finish as the palmrest that surrounds it. Separate buttons for left and right click, which is always appreciated, and is a lot more functional than the integrated ones.

The hinge holding up the Toshiba Satellite M840’s 14-inch display is quite taut, and that’ll prevent display shake in case you are typing furiously with the laptop in your lap.

The Toshiba Satellite M840’s glossy black finish carries on to the sides as well, the left side which hosts one USB 3.0 port, one USB 2.0 port and Ethernet port. The right side has another USB port along with the HDMI port and a pretty generous cooling vent. The memory card slot is on the front side, nicely hidden away on the slight inward curve towards the bottom.

A very neat design throughout, and what helps is that there aren’t a bunch of quick access keys littered around the keypad.

Overall, we like the build quality, and the relative compactness the 14-inch display form factor offers when compared to the 15.6-inch ones that are becoming more popular these days. So while the Toshiba Satellite M840’s build quality is quite good, the colour choice still remains a bit of a gaffe!

Features & Specifications
The Toshiba Satellite M840 is powered by the Intel Core i5-2450M processor clocking at 2.5GHz, and is paired with 4GB of RAM. Turbo boost takes it to 3.1GHz. This has Intel’s HM76 chipset (Panther Point), and yes, supports USB 3.0 natively. On the power front, this is pretty much a mid-range notebook.

The basic power package is clearly indicated by the graphics – HD 3000 graphics. Compared to this, the slightly more expensive Acer Aspire V3 comes with the Fermi family Nvidia GeForce GT 620M with 1GB dedicated video, and is paired with the Intel HD 3000 graphics in switchable mode.

Interestingly, this is the smallest display size in a notebook that we have tested, in quite a long time. If you don’t count the ultrabooks, the general trend seems to be towards the bigger display sizes – 15 inches around. However, for someone for whom portability is critical, the 14-inch display size means the perfect balance between portability and comfort of use.

The goodness of the standard specifications continues – 500GB hard drive, two USB 3.0 ports along with a USB 2.0 port as well as an HDMI out.

The 14-inch display is very bright, and isn’t really that reflective. Needless to say, this is hugely appreciated, considering reflective displays are more of eyestrain. The display’s crispness is quite good, which helps with text readability. However, some colours do seem to look a bit dull, and the general vividness is on the lower side.

The Toshiba Satellite M840’s island keyboard is quite a change, mostly because we have been using the more sprawled out ones on the bigger screen laptops. However, while there is no dedicated number pad, the keys are pretty comfortably laid out, and it will not take long getting used to the placement. The touchpad is more centre aligned, which is what we find more comfortable to use than the left aligned ones which was becoming a trend with the bigger display notebooks.

Toshiba sends this machine along with a 64-bit installation of Windows 7. Unfortunately, a lot of software is preloaded on this machine, and we have said it time and again, that these only help in hindering the actual OS performance more than anything else.

Performance
Absolutely no surprises on the performance front! This is a mid-range laptop, and will offer exactly what you paid for. Thanks to the better specifications – a higher spec processor and more clocks on tap, this one scores more in the benchmark tests that indicate raw system performance, than the Acer Aspire V5.

The Toshiba Satellite M840’s real life usage performance was clearly snappier than the Acer Aspire V5, and that is also partly helped by the fact that Toshiba has preloaded the laptops with slightly less software before shipping it across to the consumer.

Graphics performance, however, is a real surprise. But mostly in the case of the Aspire V5, because the Satellite M840 essentially got scores that you would expect from integrated graphics. Incidentally, 3D Mark 11 benchmark refused to run on this machine. All in all, the Satellite M840 is just not meant for any bit of gaming.

Battery life is actually very good. In the battery test, this one lasted 3 hours and 18 minutes. In real life usage, this should be able to last around 4.5 hours, if not more. In a day and age when battery tests are throwing up around 2 hours on an average, the Satellite M840’s battery robustness is appreciated and increases functionality that much more.

Bottom Line
The Toshiba Satellite M840 is checking most of the positive boxes – stable performance, well put together, comfortable keypad, good display and the cherry on top of the cake – the excellent battery life. The gaudy colour may not appeal to everyone, and this machine will not do any gaming. But then again, this isn’t targeted at that demographic anyway. Consider this, if this falls within your budget, because this does what a laptop is supposed to do – stay alive on the move!