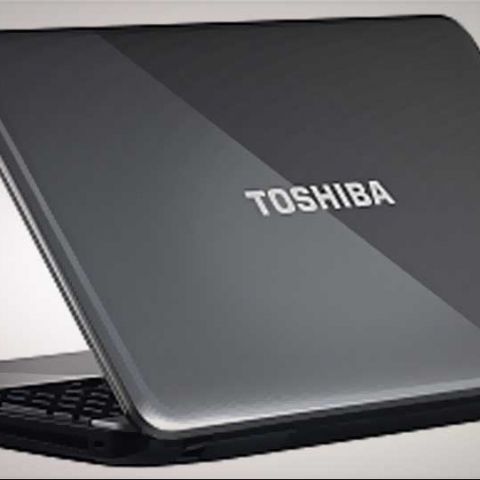 Toshiba Satellite L850 is powerful, and then some! For around Rs. 55,000, you will get a machine powered by a Core i7 processor, 8GB of RAM and a 2GB graphics card, which will warm the heart of gamers! The Acer Aspire V3 does give it good competition though, and at a lower price, it could be an alternative for someone who doesnï¿½t mind giving up a few things. But the Satellite L850 is worth considering, if within your budget.

What we are seeing now is the rise of another sub-category within the bigger category – laptops that are sort of mid-range in terms of price, but also dressed up for a gaming party, even if at a lower level. But does this jack-of-all-trades approach pay off?

Build & Design
This one won’t win any slim beauty competitions, assuming such a competition is held somewhere in this wide world! Having said that, let us clarify that the Satellite L850 doesn’t look to be that thick either. Straight out of the box, this looks like a traditional laptop, with traditional Toshiba no-frills looks and design. To some, this may be a little too drab.

The Toshiba Satellite L850’s lid has the brushed metal finish, which is a solid reprieve from the hateful glossy laptops we have been testing lately. The latest culprit was the Acer Aspire V3 (read our review), which we will be referring to a lot, throughout this review. The Toshiba logo on the lid, we feel, is a little too big. Slightly smaller, and it would’ve looked much better. At the moment, it just looks like a desperate attempt to make everyone see the brand name.

Open it up though, and the Toshiba Satellite L850 feels like a completely traditional laptop. After all the ultrabooks and their limited ports, the Satellite L850 seemed like a happy change. On the left side are the power port and a USB 2.0 as well as the optical drive. On the other side are two USB 3.0 ports, HDMI out and Ethernet port, along with a generous cooling vent. Compare this to the Acer Aspire V3, that has two USB 2.0 ports and one USB 3.0 port, the Toshiba seems more ready for the future. Surprisingly, the area on the left side around the ports is glossy, which we think is a very bad move because it’ll inevitably get scratched very badly. The memory card slot is on the front near side, on the slightly inward curved spine.

The tiled keyboard of the Toshiba Satellite L850 is well spaced out, helped by the margins offered by the 15.6-inch display. There is a dedicated number pad as well. Just like the Aspire V5, the touchpad on this one also has a left indent, but more than the former. Call us old fashioned, but we like that to be centre aligned, because that is just how the hand naturally positions itself on the keypad. The dual-tone black and grey gel well, without the shiny finish that makes laptops maintenance hungry. The touchpad has a generous amount of real estate, and it looks like it has a textured finish, but that is actually just an imprint.

The clean look around the keypad is mostly due to the complete non-existence of any shortcut / quick access keys. It is just the power button which is sharing the space with the speaker, and that is it! We don’t mind that though, since the Fn keys do double up as shortcut keys for various settings.

It is surprising that while the Satellite L850 is lighter at 2.3kgs than the Acer Aspire that tips the scales at 2.6kgs, the latter feels lighter to pick up and carry around. The L850 is built very well though, and the brushed metal finish intertwined with the matte black along the entire package means it should appeal to almost everyone, and looks shouldn’t be an issue at all.

Features & Specifications
Power – the keyword. The Intel Core i7-3610QM quad-core processor powers the L850, clocked at 2.3GHz, with Turbo Boost mode taking it to 3.3GHz. The goodness doesn’t stop there, with 8GB of RAM added to the power package. This is definitely more powerful, at least on paper, than the Aspire V3, which has an Intel Core i5 clocking at 2.5GHz and 4 gigs of RAM.

The 15.6-inch display on the Satellite L850 is absolutely brilliant. The brightness levels are quite high, and tend to act as an antidote for the slightly reflective nature of the display. It will be very comfortable for both office users as well as for multimedia viewing. The colour vividness comparison between this and the Aspire V3 indicate that the V3 has richer shades, while the L850 has better black depths.

While Acer had packed in a 500GB hard drive into the Aspire V3, Toshiba have gone a step ahead, and offered a 750GB hard drive with the L850. But do remember, both are traditional hard drives, and not solid-state drives. Also, Toshiba’s Satellite L850 is slightly more future ready, with two USB 3.0 ports, instead of just one on the Acer Aspire V3.

Both laptops happily come with Windows 7 pre-loaded, along with a bunch of third party apps and utilities – something that we don’t appreciate. We like the Windows installation to be as clean as possible, but manufacturers insist on preloading machines with trial-ware, freeware and even their own apps for backup, restore, disc burner etc.

Performance
Blazing! Let us talk about the benchmark tests first. Thanks to the super powerful quad-core processor paired with 8GB of RAM, the Satellite L850 scores an impressive 9254 in the PC Mark Vantage test. The Aspire V3, on the other hand, had scored an equally impressive score of 7649 in its own right. The clear advantage of the Core i7 processor shows up in this test. To test this further, we ran the PC Mark 07 test, and the Satellite L850 scored 2649 while the Aspire V3 was expectedly behind with 2055. While we are comparing the two, we must clarify that the two laptops are targeting the same demographic of users, but the Acer is doing that by having a power package which is a step behind the L850, but that allows it to do that at a much lower price.

The above observation is verified by the Cinebench CPU score comparison – 6.29 for the Satellite L850 for the Core i7-3610QM. The V3’s Core i5-2450M scored 2.7 clearly showing up the gulf between these two generations of processors.

Clearly, the Acer Aspire V3’s Nvidia package is a better deal for those who are a bit finicky about their graphics cards and the comparison test scores.

Battery life is a huge disappointment with the Satellite L850. No matter what, the battery will not last more than 90 minutes at full taxing mode. Not a surprise though, with such a powerful package and the stock 6-cell battery to provide the backup. The Aspire V3 was only slightly better, which clearly puts these two laptops in the desktop replacement category.

Bottom Line
The Toshiba L850 is one solid desktop replacement category laptop. Huge doses of power on tap, with graphics performance that only the Nvidia GT630M in the Acer Aspire V3 betters. Your choice is simple. If you are on a budget, consider the Acer Aspire V3. However, for better raw system performance, the Core i7 on the Satellite L850 is the one to consider.