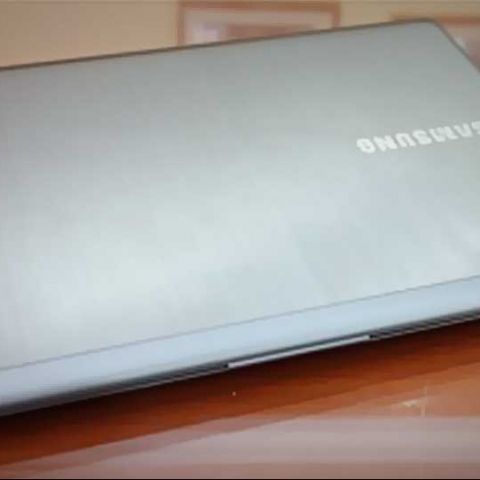 The Series 5 Touch builds on what the previous edition ultrabook offered, with the added touchscreen for Windows 8. But, do you really want to pay a sort of premium for that extra feature?

Build & Design
The resemblance with the previous version of the Series 5 ultrabook remains – it all stays in the family! Straight out of the box, our initial impression was the matter-of-fact look. The design is carried forward to the extent that the Series 5 Touch Ultrabook’s base is slightly curving upwards on three sides, making it feel slimmer than it actually is.

The 13.3-inch version of the Series 5 Ultrabook does away with the optical drive, while the 14-inch version retains that. This has a positive impact though, which makes this Series 5 Touch Ultrabook slimmer. The ports are spread on the right and left side spines on the keyboard deck. The deck itself is clean, with no additional shortcut keys.

The grey matte brushed aluminum finish on the Samsung Series 5 Touch doesn’t catch fingerprints, dust and scratches like glossy surfaces do. We have made it very clear over and over again that glossy finish on any gadget is a pain in the long run – scratches, dust, fingerprints, maintenance etc. Samsung’s idea of using the brushed metal finish is appreciated.

While the build quality of the older Series 5 was fairly acceptable, the new version has improved upon those little issues like flex on the palm-rest area. And that makes this even better to hold and use. It also remains a conventional (tried and tested) ultrabook, albeit a new generation with a touchscreen. There is no twisting about, or otherwise manhandling the device to help it perform to its full ergonomic potential.

Features & Specifications
This is where all the action is happening. The Series 5 Touch has the Intel Core i5 – 3317U (Ivy Bridge) processor that is fairly common across ultrabooks in this price bracket. The RAM gets a boost from 6GB from the non-touch 14-inch version, to 8GB in the new 13-inch Touch version. There is the Intel HD 4000 chip that will make do for the graphics but, but unlike the 14-inch version, the 13.3-inch one does not get a dedicated graphics chip. The 14-inch ultrabook versions alternate between the Nvidia GeForce GT 620M graphics and the AMD Radeon HD 7550M graphics.

The 13-inch display has a resolution of 1366 x 768 pixels. This an LED backlit display, but does stand out in the crowd for its natively higher brightness levels without compromising on colour richness or text readability. The proverbial cherry on the equally proverbial cake is the fact that this is possibly the closest we have come to a true matte display on an ultrabook. Yes, the Fujitsu Lifebook U772 was a fairly non-reflective display, but do remember that the Fujitsu is meant for the business users. Touchscreen works fairly well, but there are not many scenarios that we have been able to identify, which will make you want to use the touchscreen on a conventional ultrabook. It is an extra feature that is good to have, but that is essentially what it is.

In terms of storage, the Series 5 Touch has a 500GB hard drive and a 24GB ExpressCache flash. Unfortunately, 24GB is not enough for both Express Cache and Intel Fast Boot to work in parallel, and you would be restricted to deploying either one. Express Cache needs minimum 18GB for itself, and Fast Boot needs another 9GB.

Samsung preloads the machine with Windows 8 Pro (64-bit), and the setup is essentially a single partition, with a hidden recover partition.

Performance
The Intel Core i5-3317U processor is pretty much common on most affordable ultrabooks. The PC Mark 07 score of 3538 is pretty much within the range – with the Dell XPS 12 clocking 4734 on the higher side, and the HP Envy 4-1002tx surprisingly clocking 3150 on the lower side. We had expected fairly good benchmark scores considering how quick the machine was when used as a primary machine for the daily rigmarole at work. Unfortunately, there is some way to go before you can actually get that performance out of this machine. There is too much software preloaded out of the box, and cleaning that up is something that is fairly critical. Performance saw a major boost after the cleanup.

The Series 5 Touch Ultrabook’s keyboard is very nicely spaced out, and the keys are slightly bigger than what we see on a MacBook, for example. Adequate spacing between the keys is conducive for a quick typing session. The only little thing missing is the chunky feel that a keypress should ideally offer – this one sounds a bit hollow. There is a good-sized touchpad, something critical for multi-touch gestures to work well. Considering the scenario that you may get an upgrade to Windows 8, this one should be an element you should look out for in any laptop that you buy. Separate keys for left and right click are appreciated, and are a lot more comfortable than the integrated keys.

Battery life on the Series 5 that we tested last year was 229 minutes, and was among the best in that generation. The updated version, however, takes it up to 297 minutes on a complete charge. This is slightly lesser than 300 minutes on the XPS 12 Convertible, and 327 minutes on the Yoga 13. But no doubt that the battery is good enough for 7 hours of usage on a typical day at work.

Video Review
Here is a short video where we discuss the Samsung Series 5 Touch ultrabook in terms of the overall package, the build quality and the competition. Does it look enticing enough to consider buying?

Bottom Line
As an ultrabook, the Series 5 builds on what the previous edition offered, with the added touchscreen for Windows 8. But, do you really want to pay a sort of premium for that extra feature? If yes, this is a conventional ultrabook that does not disappoint. It is a fairly good deal for what it claims to offer. But, if the touch feature might end up being a less-than-often used feature, we recommend you pick up a previous Series 5 edition, with the same 13.3-inch display, for roughly Rs. 10,000 less.