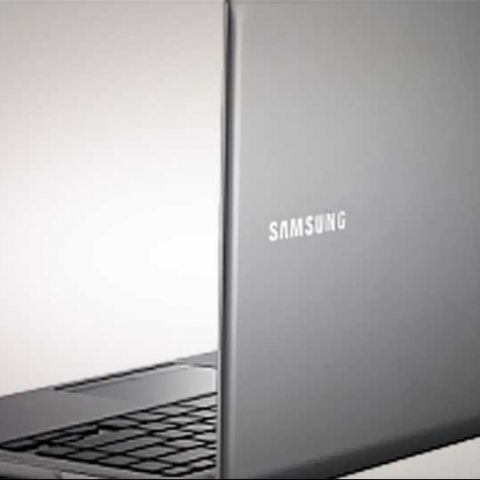 The Samsung Series 5 Ultrabook has been updated with Ivy Bridge, and is better than ever! When we had reviewed the previous generation version, the overall package vs. the price made us slap the "Best Value" tag in the ultrabook comparison test. In a nutshell, it was excellent. With Ivy Bridge, it just moves that extra step towards outstanding, made even more relevant by the affordable price tag.

To the casual viewer and observer, it may seem that we have been tricked into re-reviewing the same product, which we had tested a few months back! However, trust us when we say this – these aren’t the same products at all.

This is the Samsung Series 5 ultrabook alright, which looks same as the earlier Sandy Bridge-based one (read our review) on the outside, but the power package is completely updated.

Build & Design
We have said it time and again, the Samsung Series 5 is an ultrabook, but offers a lot more. Expected then, that it looks slightly thicker than the ultrabooks usually do. But we don’t mind! It looks extremely classy, and the largely understated visual elements probably help it blend in well. The grey matte aluminum finish doesn’t catch fingerprints, dust and scratches like glossy surfaces do. We have made it very clear over and over again that glossy finish to any gadget is a pain in the long run – scratches, dust, fingerprints, maintenance hungry etc. Samsung’s idea of using the brushed metal finish is appreciated.

A different looking power key does blend in well with the overall grey look.

The same colour theme is carried throughout the ultrabook. Open it up and the power key blends in with the same colour, and the touchpad and the right and left click keys have the same treatment. It would have been even more interesting had all the little stickers been monochrome-ised as well, just like Acer did with the Aspire S3 (read our review)!

The Series 5 Ultrabook is essentially bigger than most conventional 13-inch ultrabooks, thanks to its 14-inch display. The optical drive is placed on the right spine, and even that has a dual layered design along the way. There is a USB port and the card reader accompanying the drive. We had criticized the card reader cover, and the material and opening mechanism of it all. Unfortunately, that has been carried forward as before. There are two USB 3.0 ports, the HDMI out as well as a USB 2.0 port on the opposite spine. The dual layered design gives this ultrabook a bit more visual presence. There is no port at the back, and that really makes plugging in and removing devices more convenient than some rival ultrabooks.

We like the overall build quality of the Samsung Series 5 ultrabook, and despite the affordable price tag, there is no apparent cost cutting in terms of the materials used and way it is put together. One of the solidest ultrabooks around, and we can safely say that it actually feels a lot more expensive than it actually is. And we cannot say this very often for most gadgets!

Features & Specifications
This is where all the action is happening. Out of the window goes the Intel Core i5 – 2467M (Sandy Bridge) and in comes the Intel Core i5 – 3317U (Ivy Bridge). Same as earlier, the 6GB of RAM is carried forward. With Ivy Bridge on board, the integrated graphics also get a boost with Intel HD 4000. Samsung insist on giving us the goodness of a dedicated graphics chip as well, with the Nvidia GeForce GT 620M graphics. Just to refresh your memory, the previous version had the AMD Radeon HD 7550M graphics.

The Series 5 has made it a point to walk a line that distinguishes it from the rest of the pack, and the 14-inch display does offer a bigger window than the conventional 13-inch ones! The native resolution is 1366 x 768 pixels, which makes us wonder when we will see the Full HD resolution of 1920 x 1080 become more popular in ultrabooks. That is the next logical step, and we were hoping that the second generation of ultrabooks would usher that in.

Clearly, the Samsung Series 5 isn't aiming to win any "which is the slimmest ultrabook" competitions.

Looking at what is on offer, we were impressed with the non-reflective nature of the Samsung Series 5’s display, making it infinitely more comfortable to use in the long run. This is a very bright display, natively, and even at 20% brightness, this was more than usable in a typical office environment. Its adequate crispness makes this equally capable of handling multimedia and for your web browsing and document read and write requirements, with no visible noise around text. Colour vividness of display is slightly on the lower side, partly because the black levels aren’t very dark. But then again, this display does make up for that little drawback with an overall strong show elsewhere.

The primary storage drive isn’t an SSD in the review unit that we received, but there is a 1TB HDD that you can utilize for your storage requirements. Interestingly, just like the Acer Aspire S3, the Samsung Series 5 also has a flash storage that is used for the caching tasks – quick resume etc. And that really makes a difference. You can turn this feature off completely via Samsung’s preloaded utility – Easy Settings. But then again, why would you want to! Additionally, Samsung has preloaded this machine with a utility called Samsung Fast Boot. This does make a considerably difference once turned on, cutting down the boot time by up to 30 percent, depending on how many apps you have lined up for start at boot. All this really makes a difference, making the ultrabook feel very responsive and quick, no matter if you may have a bunch of apps open in the background.

It has something that most ultrabooks don't - an optical drive!

Unlike most other ultrabooks, this one has an optical drive, giving you the full laptop feel. Two USB 3.0 ports and one USB 2.0 port, spread on either spine. And yes, the HDMI output is not missed out on!

The keyboard is very nicely spaced out, and the keys are slightly bigger than what we see on a MacBook, for example. Adequate spacing between the keys is conducive for a quick typing session. The only little thing missing is the chunky feel that a keypress should ideally offer – this one sounds a bit hollow. There is a good-sized touchpad, something critical for multi-touch gestures to work well. Considering the scenario that you may get an upgrade to Windows 8, this one should be an element you should look out for in any laptop that you buy. Separate keys for left and right click are appreciated, and are a lot more comfortable than the integrated keys.

Samsung preloads the Series 5 Ultrabook with Windows 7 (64-bit), and we assume that this machine will come under the umbrella of eligibility for an upgrade to Windows 8. Yes, there are trialwares preloaded on the laptop, but thankfully are lesser than what the likes of Sony do, for example. And some of Samsung’s own utilities – like the Easy Settings one we mentioned earlier, are actually very important.

Performance
Compared straight with the previous generation Sandy Bridge version, the updated Series 5 is a couple of notches ahead on the scoring sheet. And we expected that from the second-generation ultrabook, and any less would have been a disappointment.

As far as the benchmark scores were concerned, this one is mostly scoring better than the Acer Aspire S3, except with CineBench CPU test and PC Mark 07 – not a surprise considering the more powerful processor. But, benchmarks only show half the story. In terms of real life usage, the Series 5 feels much faster than the Aspire S3 – opening apps, general quickness of accessing files and folders and even during multitasking.

Despite both ultrabooks having the flash storage for caching, the Samsung machine seems to take better advantage of that to make the overall experience snappier.

No shortage of ports on either side.

Graphics is a no contest literally, since this offers switchable graphics, while the Aspire S3 can only bring the Intel HD 4000 to the fight. So much so, that we can only compare these two Ivy Bridge machines on benchmarks except 3D Mark 11, which refused to run on the Aspire S3. In all, the Series 5 has a considerable lead over the Aspire, and the scores ranges to indicate a mid-range performance. And that is probably a bonus for you on an ultrabook.

The real kicker is the battery life. Largely, the trend has been – more powerful the processor, the battery life does take a hit. In this case, the opposite has happened. The previous generation version of the Series 5 had scored 160 minutes on a single charge under heavy load testing. The new version scores a whopping 229 minutes under the heavy stress test benchmark. This is almost touching 4 hours in the test, and you can essentially expect 5 hours plus easily under a usual everyday usage load.

We love the completely understated looks and design.

Bottomline
Well, if you are in the market for an ultrabook, but don’t want to spend insane amounts of money on the likes of a Dell XPS 13 (read our review) or an HP Folio (read our review), then you should consider this as the beginning and the end of your search! With a box price of around Rs. 57,000, this one is considerably less expensive than the other Ivy Bridge alternative – the Acer Aspire S3. And at this price, this ultrabook is essentially offering you a laptop-esque feature set, complete with the optical drive at your service. We would recommend this to anyone who wants a sufficiently powerful machine, and this one is within the budget.

Not as slim as like likes of the Dell XPS 13 and the Acer Aspire S3, but very well put together.

Notice the muscular curves on the sides and towards the rear.

One more USB port to add to the ones on the other side.

The 14-inch display does offer a bit more real estate on the screen.