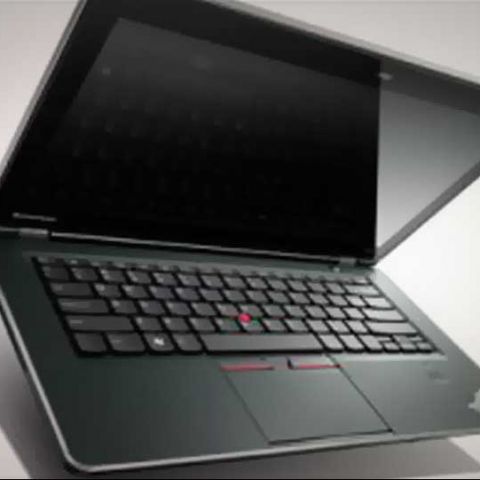 The Lenovo ThinkPad E420s is the new business laptop that inherits the heritage of its predecessors, while adding a whole new style and design.

The Lenovo ThinkPad E420s is the new business warrior of the 'ThinkPad' series featuring the second generation Intel Sandy Bridge Core i5 processor, 4GB RAM, an in-built Intel HD Graphics and 320 GB HDD. It also comes with useful proprietary software and a fingerprint reader. Read on to see if the new Lenovo ThinkPad E420s business laptop stacks up to its name and legacy.

Features
The Lenovo ThinkPad E420s gets the Intel's Sandy Bridge Core i5-2410M processor running at 2.3 GHz. Further, it gets a 4 GB DDR3 RAM, in-built Intel HD Graphics 3000 and a 320 GB HDD. The 14 inch screen has a native resolution of 1366x768; given that this is a 14-inch business laptop, we were disappointed that the resolution wasn't higher. 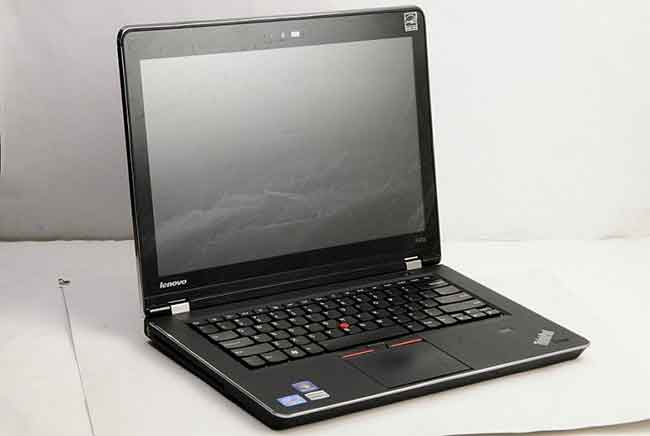 As for the connectivity options the Lenovo ThinkPad E420s does very well indeed. The the left side features a slot loading DVD drive with an eject button and a card reader slot. The right side features two USB 2.0 ports out of which one is a powered USB port, a HDMI out and a headphone jack. The back includes a VGA port, an Ethernet port, an eSATA/USB 2.0 combo port and a SIM slot. The wireless connectivity is taken care of by Wi-Fi 802.11n and Bluetooth. The omission of a USB 3.0 port was sorely felt.

Sporting a glossy screen display, the Lenovo ThinkPad Edge E420s business laptop suffers from reflection in bright light. The vertical viewing angle is not all that great but the 180 degree tilt feature means finding the right viewing angle wouldn't be all that difficult. The horizontal viewing angle is pretty decent. Being a business laptop the Lenovo ThinkPad sees the inclusion of fingerprint reader for added security, which can be used as the password to login to the device. The speaker delivers pretty decent output but starts to give out at close-to-max volume.

The ThinkPad's keyboard lacks backlighting but the "Think Light" more than makes up for it. The "Think Light" can be activated by pressing the "Fn" and Spacebar, but don't expect the same comfort as a backlight keyboard. Still, it’s a great tool for typing in the dark.
The position of certain keys on the ThinkPad E420s keyboard have been changed viz. the Ctrl button and the Function (Fn) key at keyboard’s left corner. However, the ThinkPad E420s allows you to interchange the functions of the Fn and Ctrl key in the BIOS setting i.e. the Fn key starts functioning as the Ctrl key and vice versa.

The Lenovo ThinkPad Edge E420s also comes with Lenovo’s proprietary ThinkVantage Technologies software suite, which offers a whole host of maintenance, security and other useful applications to take care of your business laptop.

Design and Build
The Lenovo ThinkPad E420s has a very neat design. The screen lid exterior and the chassis feature a soft rubberised finish, which gives the laptop a very nice. A chrome strip runs along the edges of the E420s’ screen lid as well as the chassis giving the device a very clean look. The screen is supported by metal hinges, which gives the screen a very sturdy rest. Further, the screen has the ability to tilt back upto 180 degrees, this makes it very easy to find a convenient viewing angle. Overall the device has a rock solid build. A diagonally placed ThinkPad logo is imprinted on the top right side of the screen lid and at the bottom right side of the chassis. The "i" in both of the ThinkPad logos lights up once the system is on and keeps blinking when in sleep mode.

The ThinkPad Edge E420s’ keyboard is easily one of the best in the business with chiclet style keys. The keys are slightly concave which makes typing a much nicer affair. The tactile feedback is extremely good; there was zero flex from the keyboard deck while typing. The plush palmrest further enhances the typing experience on the device. This Lenovo ThinkPad Edge E420s like its predecessors is a remarkable device to type on. 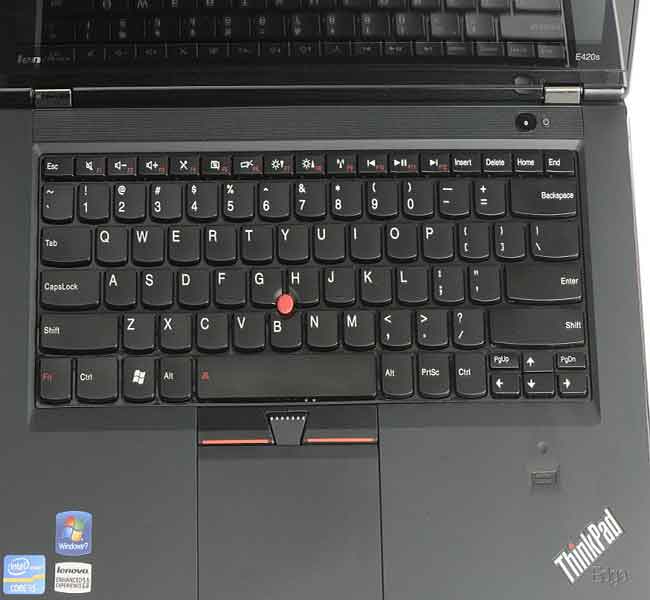 The laptop’s traditional trackpad is pretty accurate with a smooth rubberized surface but it doesn’t feature separate mouse buttons. Having said that, an important feature of the Lenovo ThinkPad Edge E420s is its TrackPoint; we must say it is the best and most accurate way to navigate the interface but it demands a little getting used to. Supporting the TrackPoint below the keyboard are three mouse buttons that serve as the left/right click and the center button serves as the scroll key and are extremely easy to press; the tactile feedback is excellent. Overall the navigating and typing experience of the ThinkPad is arguably unmatched in the industry.

In the run for designing slim and portable laptops, the Lenovo ThinkPad disappointly does away with removable battery. The speaker is located above the keypad and runs along the horizontal length of the keyboard. The power button is located at the top right corner of the chassis.

Read more about the performance of the Lenovo Thinkpad Edge E420s, and our verdict, on Page 2...

Performance
The performance of Lenovo ThinkPad E420s did well in our PC Mark Vantage test scoring a 6002. Having an in-built graphics - Intel HD Graphics 3000, the device doesn't really deliver high performance in gaming but again it is not meant to be a gaming laptop, having said that occasional indulgence in light gaming wouldn't be load for this machine. In the 3D Mark 06 test the laptop scores a respectable 3,664. 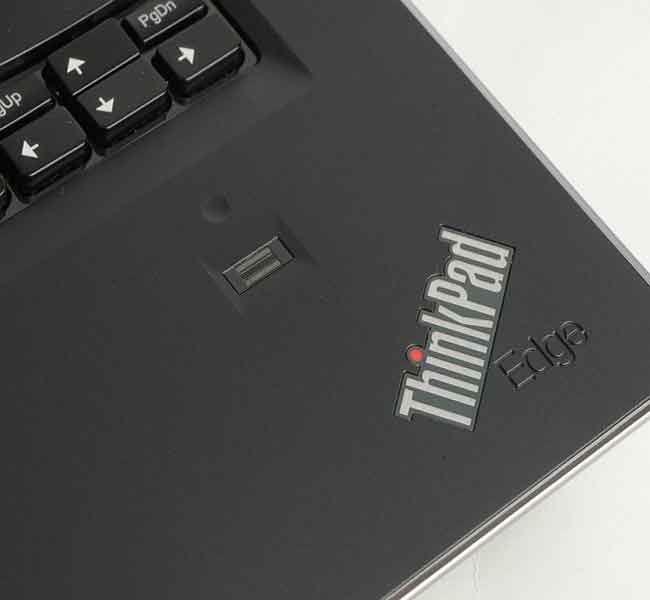 The HD video playback on the device was good enough; we would rate the playback experience as pretty good. The Lenovo ThinkPad Edge E420s’ glossy screen is bright and offers vivid colours while watching HD movies and at the same time is good for reading text for extended time. Audio performance from the laptop’s onboard speakers is quite good for personal entertainment with loud audio levels. The Thinkpad does a very good job of bringing multimedia features to a traditionally business laptop.

In terms of battery performance, the Lenovo ThinkPad Edge E420s at high-performance preset and max brightness level made our test video loop for 1 hours and 50 minutes. On a conservative power plan the laptop should easily deliver more than 3 hours of usage off a single charge, which is good for a 14-inch laptop.

Verdict
The Lenovo ThinkPad E420s is available for a price of Rs. 55,200. You can expect the device to perform its core duties admirably viz. multitasking, web browsing with multiple tabs open at the same time, Office documents etc., you get the catch, don’t you? The new Lenovo ThinkPad Edge E420s packs in very good hardware in the shell of well-built, easy to use laptop. To put it in simple words, this is a well-rounded 14-inch business laptop that will hold its own in a boardroom and well worth the money.