HP Spectre 13 Intel Core i7 Review: Love it or hate it but you can’t ignore it 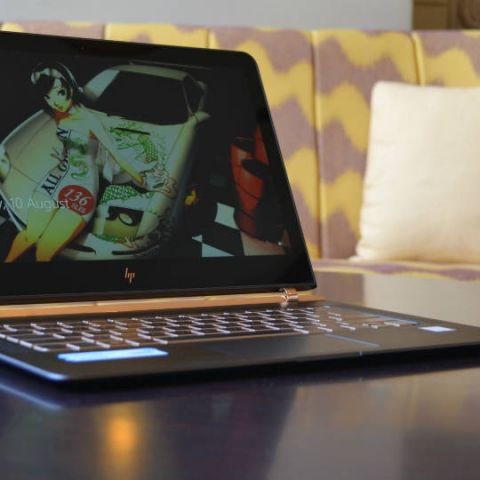 Beauty and brawn are hard to get, and HP couldn’t get it completely right either. The company came close, though, and the Spectre 13.3 is meant for those who want the world’s slimmest laptop above all else. For practical users, the Dell XPS 13 and Macbook Air make better, and cheaper buys.

It all started on January 29, 2008, when Steve Jobs went up on stage, opened the manila envelope and took out the Apple MacBook Air from it. That was the defining moment for slim, light and portable laptops, which we see today. Eight years on, the ultrabook category has blossomed, with laptops from Dell, Lenovo, Asus and the company in question today, HP. HP’s latest take on the ultrabook segment, the HP Spectre 13.3 (which shall henceforth be called Spectre, for convenience sake), is in some ways, a big advancement in ultrabooks.

Where the Macbook Air has had hardware refreshments, its design has remained the same. HP, on the other hand, has built the world’s slimmest laptop. The Macbook is well regarded even today, and it’s much cheaper than many other ultrabooks now, but the Spectre sets the benchmark for “slim and light” laptops, just like the Macbook did all those years ago. I say this only from a build point of view, and the Spectre still has its drawbacks as an ultrabook. HP has had to cut corners for this design, and the Spectre can even be called an impractical laptop. 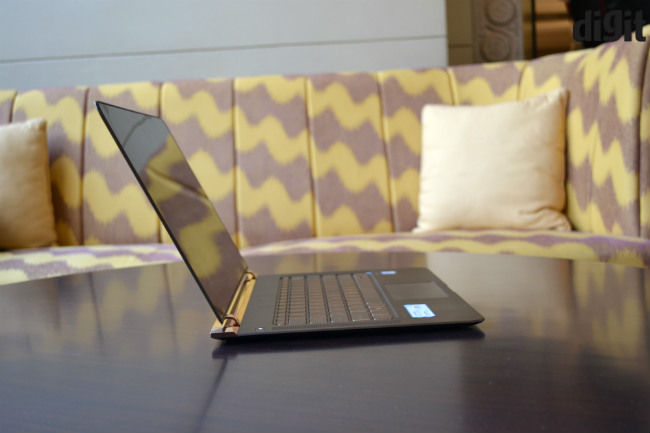 HP has made decisions in order to achieve the thin profile, and some of those decisions and innovations will carry forward into the future, in the future of ultrabooks. Here’s what the Spectre is all about.

Build and Design: Svelte with bling
My fellow reviewers didn’t find this to be a good looking laptop, but honestly, I personally like it. Few ultrabooks take the shiny, shimmering route, and the HP Spectre is meant for the consumer that wants this thinness, with the flash. It’s a different breed of laptops. And as far as the looks are concerned, you either like them, or hate them, just like we did.

Looking at the Spectre from a luxury standpoint, its dark ash paint job and Copper finish (or gold), is designed to mimic jewellery or a high end wrist watch. To make it more authentic, the rear Copper strip is not oleophobic, and hence, a fingerprint magnet. HP says this helps retain the luxurious looks of the Spectre. 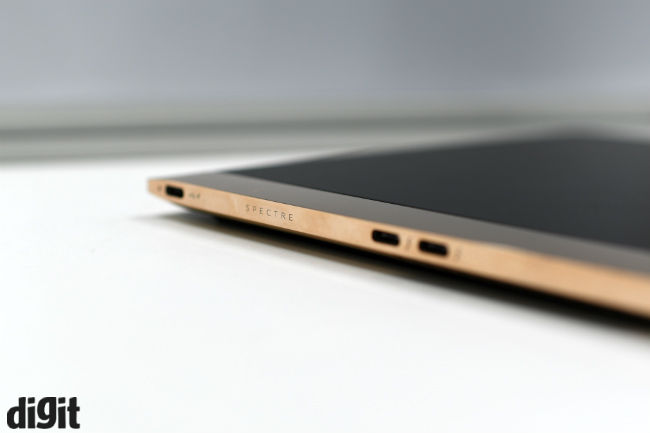 Speaking of luxury, regular friction hinges won’t suit this laptop. They require an extra mounting bracket to be installed on the display and thanks to the Spectre’s thinness, HP had to design a new hinge for this. HP calls this the Piston hinge and it is hidden in the copper base, behind a ring. The piston hinge uses two pair of gas cylinders, which are able to provide even resistance throughout the display’s motion. The resistance is quite good, but given the weight of the display itself, it does wobble at times. Also, a 124 degree tilting angle is really not enough nowadays. 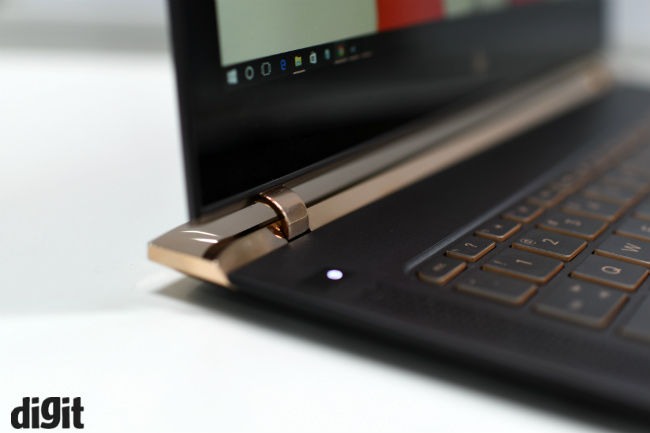 As for the overall build of the laptop, the Carbon fibre base and Aluminum lid combo, adds to the already commendable build quality. There is very little flex despite the fact it’s only 10.4mm thick. Even the ultra-slim display on the Spectre has minimum flex. There are three rubber strips fitted below the laptop, which provide good grip and ample breathing space to the processor. On top of that, hyperbaric cooling does a great job in cooling the CPU, even when you keep this on a rug or on your lap. I must add though, while using the laptop on your lap, you will feel the warm exhaust, but not enough to worry, unless you’re doing really resource intensive tasks, like photoshop. 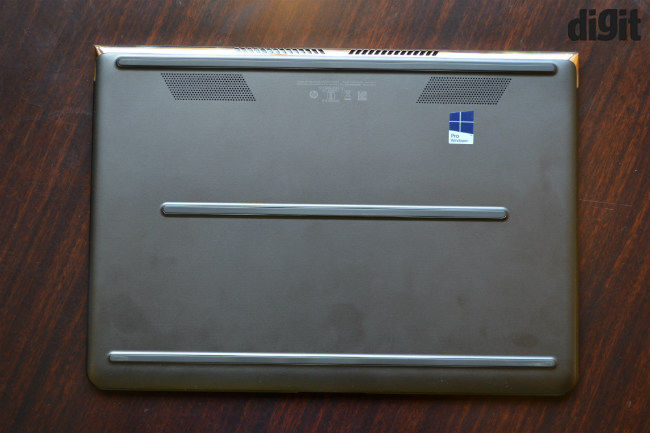 Ports: Two more than the MacBook
Being a slim laptop has its compromises and the three USB Type-C ports on this device are all situated on the back. You can charge the laptop using any of the three ports and you can use any USB type-C enabled peripheral as well. Since the Type-C port is still relatively new, HP provides adapters for USB Type-A, ethernet and VGA ports, but you still may need adapters. I wish an HDMI adapter had been included, but you may not need one. 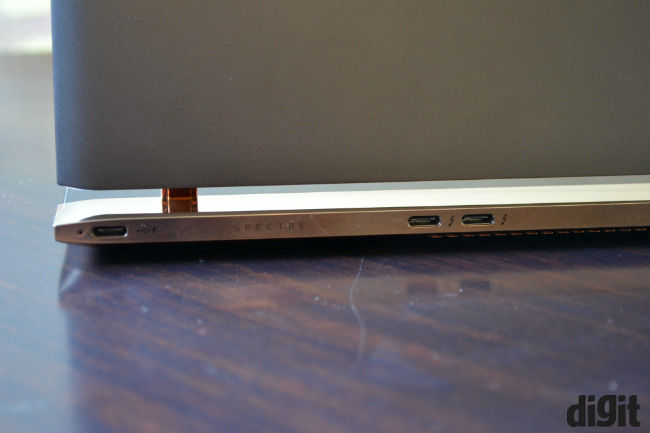 Two of the ports on the back support thunderbolt standards, so your 4K requirements are also covered there. Also, premium laptop buyers will appreciate the availability of more ports than the competing Apple MacBook, and even HP’s own Elitebook Folio.

Display: Good but compromised
When a Windows laptop costs over a lakh rupees, a touch-screen panel is an unstated mandate. However, in its quest to bring the millimeter count down, HP’s Spectre doesn’t have a touch screen panel. It’s a reflective and glossy, Gorilla Glass covered display. 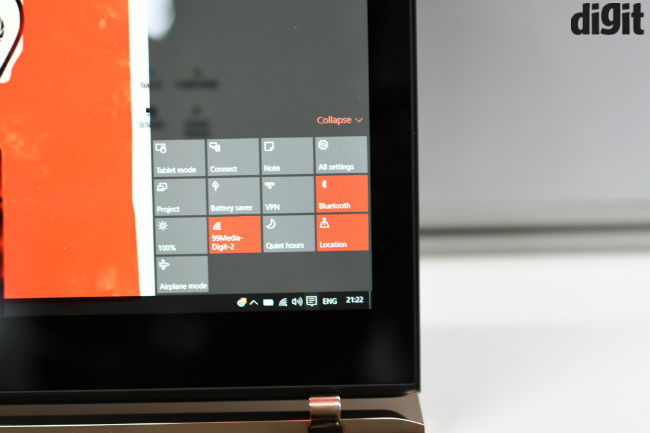 The 13.3-inch display offers one of the best viewing angles and colour saturation we have seen in the segment and at 410 lux at its center. It’s also a laptop at this price should have a 2K display, not a 1080p panel like this one. All of the Spectre’s competitors have one.
The resolution does save battery though, and helps the Core i7 chip inside perform even better. 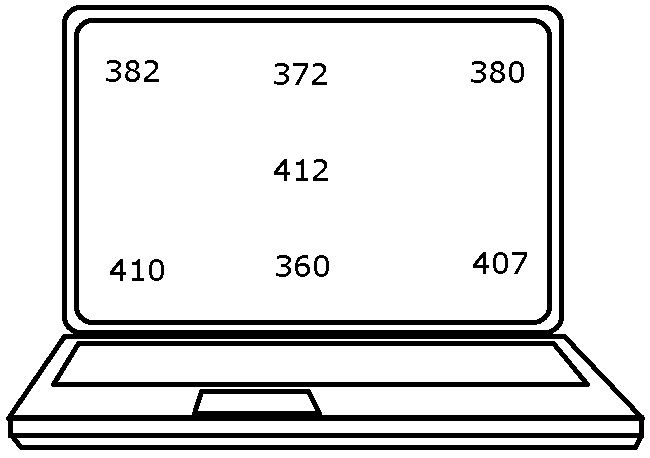 Keyboard and Touchpad: Some right, some wrong
A 1.3mm key travel on this thin a laptop is an engineering feat indeed. HP achieved this on the Folio as well, but the Spectre is slimmer than that laptop. The typing experience on this laptop is much better than the 12-inch Macbook, despite its fancy butterfly mechanism. The key depressions feel precise and the pitch on the island style keyboard is nearly perfect. It’s also a backlit keyboard, but not light sensitive. 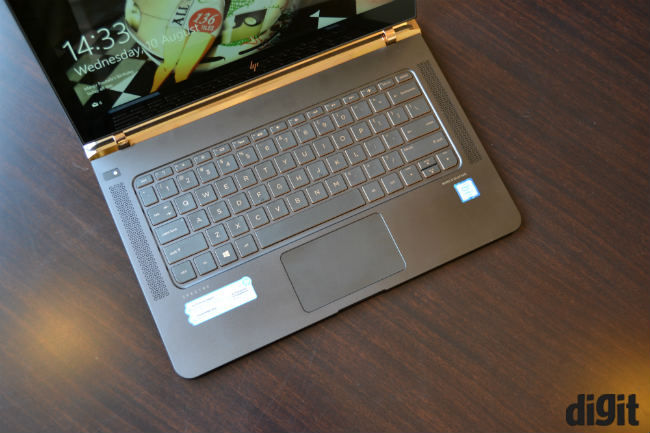 As good as the keyboard is, though, the touchpad doesn’t match those standards. It’s a glass touchpad, but small, and not very tactile. The click depressions is negligible, though precise, and scrolling isn’t comfortable. You get all Windows 10 gestures, but the HP Spectre’s touchpad isn’t the best I’ve used so far. 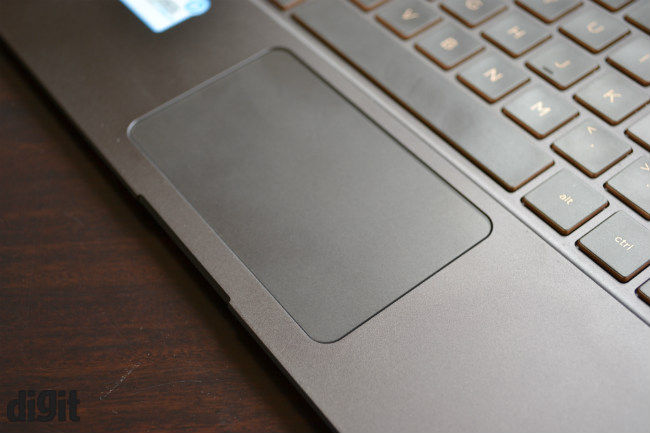 Performance: Best in class, but…
Slim laptops are often fitted with Intel’s Core M processors, but HP chose to use the powerful Core i7 processor on this one. An i5 variant is also available. You get 8GB of RAM to boot. Now, while the Core i7 achieves superior performance compared to most ultra thin laptops, the slimness plays a role here.

The Spectre is fast, until really taxed with heavy load. Having cooling fans on a laptop this thin is again an engineering marvel, but they aren’t really effective. You wouldn’t ideally buy this for gaming, but games like Dota 2 and Life Is Strange, at medium settings, were able to bring the temperature up to 80 degrees. The processor quickly throttles from the peak 2.5GHz clock speed to 1.9GHz within minutes. So, while you do get a Core i7 processor, if you’re planning to do heavy photo editing, or video editing, you shouldn’t expect it to last at full speed all the time. 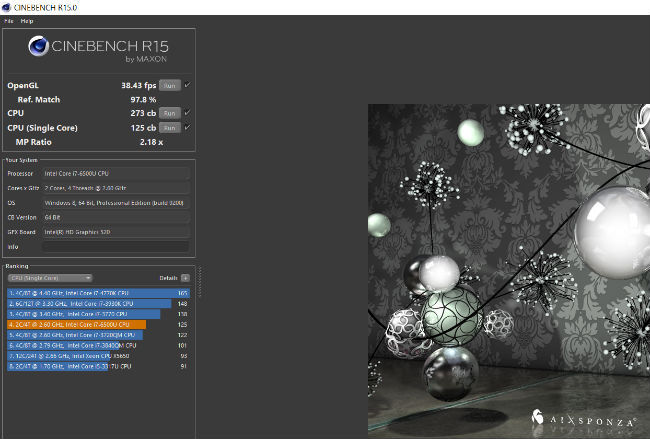 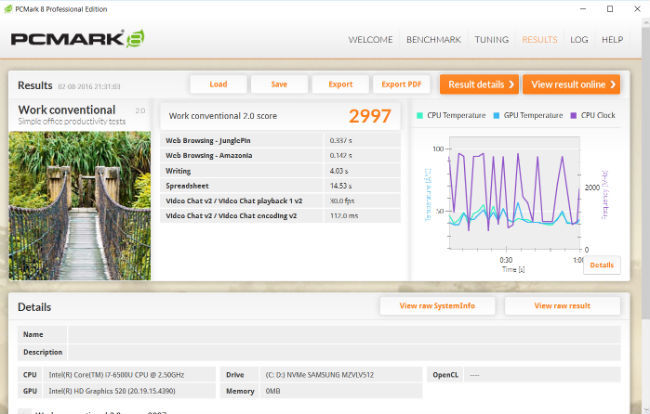 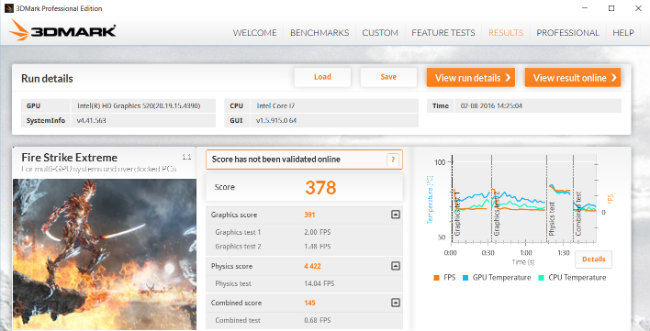 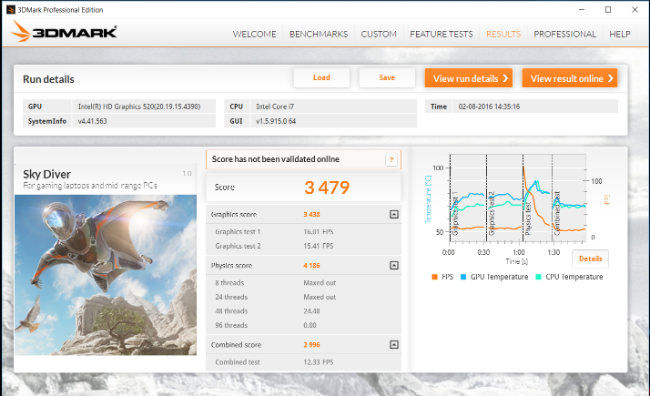 The hyperbaric cooling system on this device works, but not flawlessly. The fans suck air and push it through the whole system at high pressure. In doing so, they make a lot of noise, without really being very efficient either. Under heavy load, throttling is easy to spot. During my tests, I recorded 35-40 degrees temperature on the CPU under normal workloads, which reaches over 80 degrees on heavy workload. On the outside, the body of the laptop reached a maximum of 45 degrees just above the keyboard. 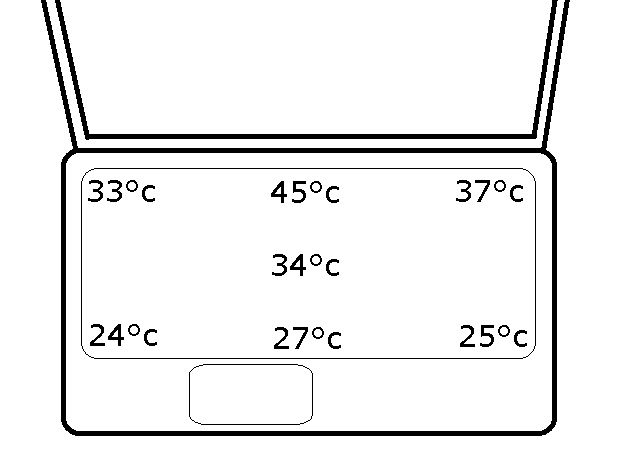 To sum up, the HP Spectre is a very powerful ultrabook, but not without throttling issues. The temperature goes beyond what we expected, which isn’t good in the long run and can affect the life of the hardware inside. That said, if you’re buying this ultrabook, you’re most likely not looking to perform tasks heavy enough to affect the hardware.

Since the HP Spectre is powered by an Intel Core i chip, it does perform well compared to slim laptops running on Core m chips. However, this performance comes at the cost of battery life. The battery life is still low thanks to the smaller battery in the thin chassis. The HP Spectre can last for six and a half hours on mixed workload, and did a best time of 7 hours on full charge. Laptops like the Dell XPS 13 and MacBook Air, which offer similar hardware can provide 10 hours worth of battery life.

Bottomline: Should you buy it?
Though the HP Spectre ultimately falls in the 'Ultrabook' category, it isn't a mainstream ultrabook by any means. Right from its positioning as a lifestyle product, to its looks, finish, and the super slim profile, the HP Spectre is meant to wow you. Its generous dash of chrome and a premium finish is normally associated with luxury products. If you want the slimmest ultrabook possible, price no bar, then this is the laptop for you. Similarly, those looking for the “bling” would like this device. 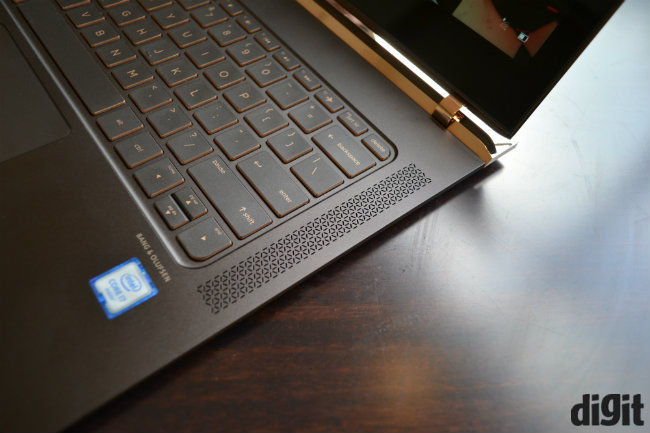 The Spectre is meant for customers who want more than performance from their laptops, and can live with its compromises. We won't recommend it over the Dell XPS 13, the Apple MacBook Air or even HP's Envy 13 as they offer similar performance at a much lower price. Quite simply, the HP Spectre is not meant for that practical buyer, it is meant for the fashionistas.