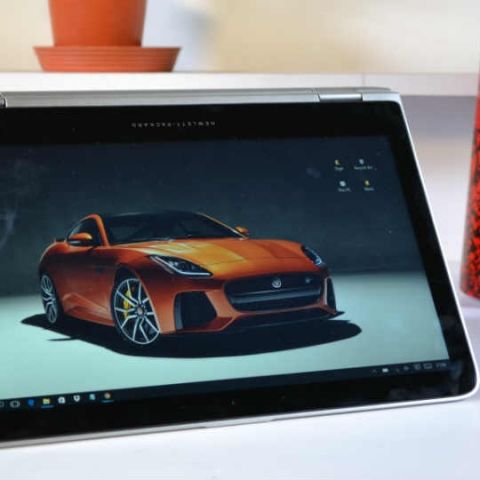 The HP Pavilion x360 strikes a balance between performance and battery life in what is a functional hybrid laptop, at a good enough price.

A few years back, Lenovo introduced the world to convertible laptops under its Yoga brand, and HP soon followed suit. The latter’s convertible x360 range of laptops was the answer to Lenovo’s Yoga series. These laptops are priced from about 30-ish thousand rupees to over 1 lakh. This HP Pavilion x360, a 13-inch model with a price tag of Rs. 57,990, sits in the middle of this range. On paper, it is a decent mid-tier machine, with a touchscreen and a rotating 360-degree hinge, hence the name. It is reasonably light and you can use it as a Windows tablet too, but does it work for real world usage? We used the laptop extensively to find that out, and more. 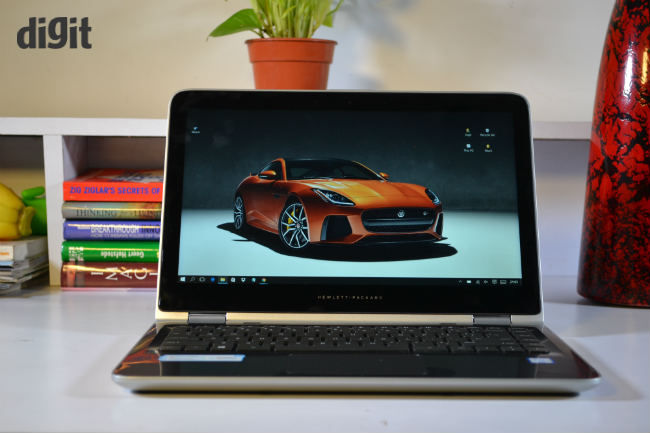 Design and Build
The new HP Pavilion x360 is a more mature approach from HP's previous designs. It sheds the bright colour used on the smaller 11-inch models for an aluminium-type look. From the outside, the laptop looks premium and is reminiscent of the commendable design of the HP Envy 13. However, the build quality is not as premium as the Envy 13, which had an aluminum build. The x360, on the other hand, has a plastic build, but it is quite good. There is almost no flex in the entire body, not even on the display. The hinge design is good and has a decent amount of resistance, which keeps the display in place. That said, there is a minor wobble while typing or while using the touch screen in the laptop mode. 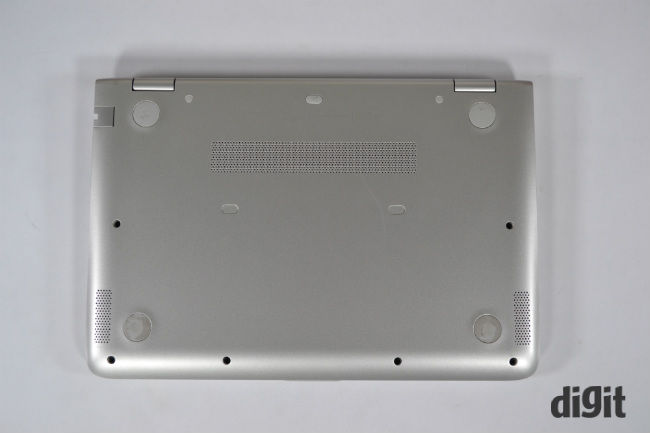 The keyboard base also has a brushed metal look to it, which makes the laptop feel more premium as compared to its Yoga rivals. While some may like the understated matte look of the Yoga 500, to us, the HP Pavilion x360 looks more premium. 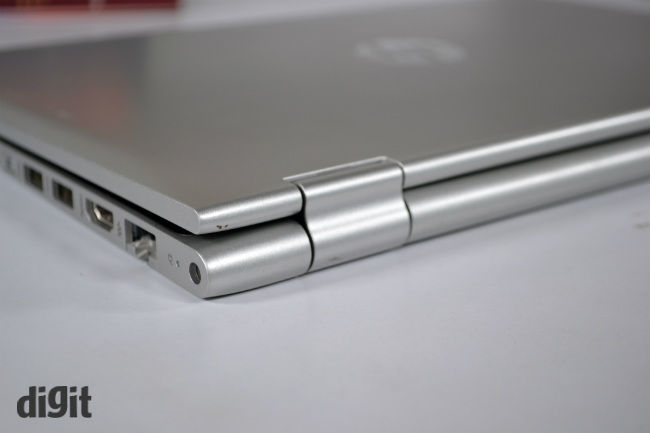 Moving to the I/O ports — on the left of the laptop we have the power button, followed by a Kensington lock slot, an exhaust, one USB 2.0 port, a memory card reader, volume key and HDD indicator. On the right, the laptop features the power port, an ethernet jack, two USB 3.0 ports, a Windows key for when you are using it as a tablet and the headphone and mic jack combo. The base panel is curved from the sides and houses Bang and Olufsen-enabled speakers on either sides. The laptop has four rubber pads, which give it ample stability on a table. 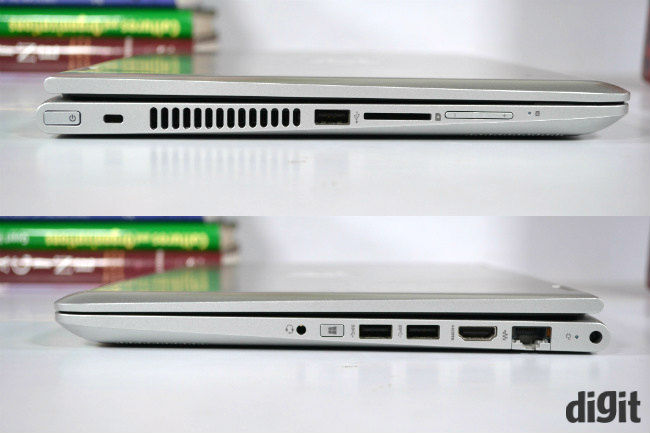 Display
The HP Pavilion x360 flaunts a 13.3-inch touchscreen with a 1080p resolution. The colour saturation is decent, as are the viewing angles, even though it features a reflective, glossy display. The reflectiveness, though, is not a big hinderance, unless you are working under direct sunlight. The touchscreen is quite good as well, and supports ten point multitouch input. It is also quite accurate and responsive. We were able to edit an entire excel sheet by using only the touch input and did not find the experience tiresome at any point. With the keyboard fully rotated, you can use the machine as a proper Windows tablet, and it works as one. But, it gets uncomfortable after a few minutes as the laptop weighs 1.7kgs. You can, however, use it comfortably with some support underneath. 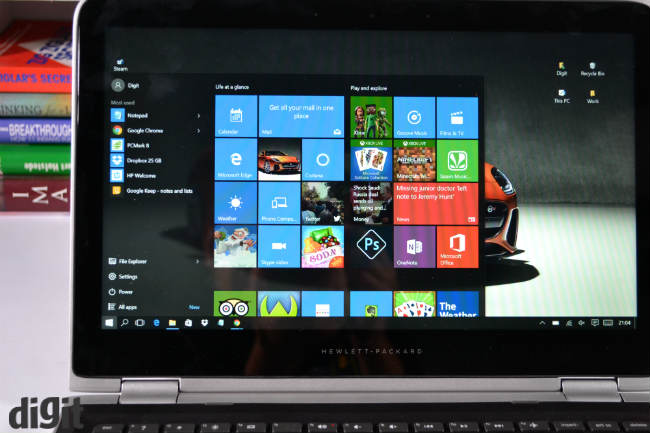 We used the laptop in modes like tent mode and full tablet mode, with the keyboard fully rotated. The hinge is sturdy enough to support the display in different positions. Typing on the touchscreen itself, we did observe a wobble, but it was well within the range of what the category offers. 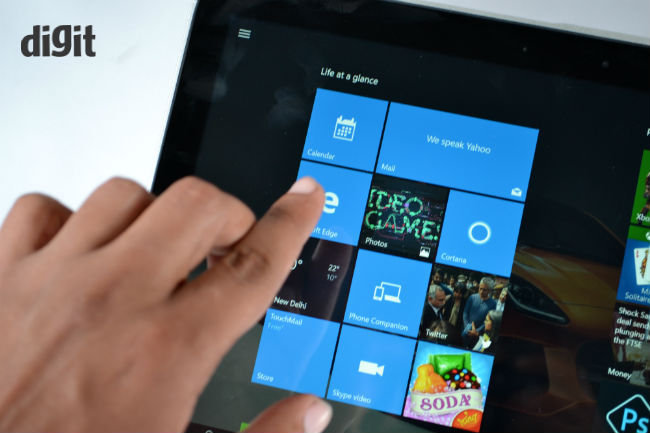 Keyboard and Touchpad
You can use the touchscreen for simple inputs, but beyond that, a keyboard is required and the Pavilion x360 simply has one of the best we have seen in the category. It’s reminiscent of the one we used on the HP ENVY 13, although not backlit. That said, the island-type keyboard is well spaced and has adequate key travel of about 1.3mm. We extensively used the keyboard for typing and didn't find the experience straining. 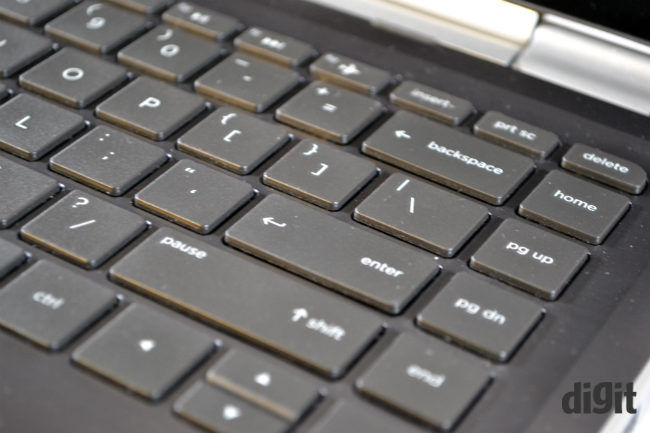 The touchpad, on the other hand, works only when pressed hard. Both the left and right mouse clicks are a tad stiff for our liking and don’t feel as good to use as the keyboard on this device. The matte touchpad, however, supports all Windows 10 gestures.

Performance
The HP Pavilion x360 we reviewed was the mid-tier model. It sports the new 6th Gen. Intel Core i5 processor (the i5-6200U). This is combined with 4GB of RAM and churns out good performance, considering the product category and price. Having used it for myriad entertainment and work purposes, we barely found lags on the device. From playing high quality Full HD content to opening two dozen Chrome tabs, the laptop did everything with ease. The Pavilion x360 does not come with a dedicated GPU, but the Intel HD 520 is powerful enough to handle less demanding games. We tried playing some platformer game titles, such as Guacamelee and South Park: Stick Of Truth and both worked well. Also, the sound quality is one of the best we have seen in this price category, thanks to the Bang and Olufsen speakers. 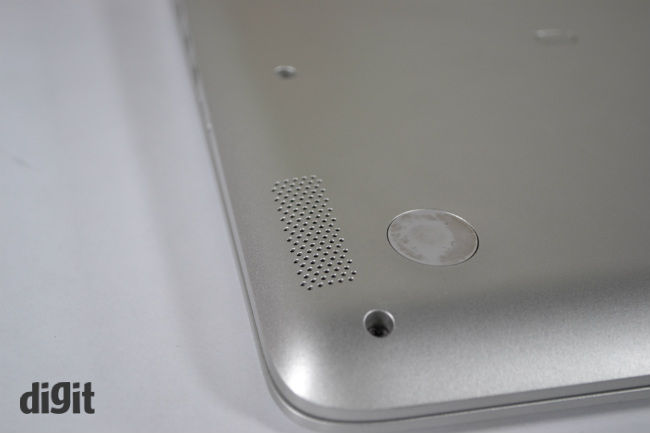 To explain using numbers, the laptop was able to achieve more than 30fps at 1080p resolution. We observed frame drops at times, which is quite acceptable considering that this is not a gaming laptop.

There is only one shortcoming worth mentioning. The HP Pavilion x360 comes with a 1TB HDD drive, which runs at 5400RPM. While it solves the storage space issue, we would have preferred an extra SSD as a primary drive at this price.

Battery
Lastly, using the laptop as a daily driver, we were able to get about 5-6 hours of usage from it, which is quite impressive. Even in our standard battery test, the 13-inch x360 lasted for 6.5 hours, which is well above the category average.

Bottomline
Overall, we believe that HP has been able to strike the right balance between performance and battery life, which makes this a functional hybrid laptop. There are many laptops that offer the same rotatable functionality and are priced lower than the HP Pavilion x360, but  they aren’t as well equipped.

The nearest competitors that are at par with this laptop in terms of specifications are the Lenovo Yoga 2 and the Dell Inspiron 7000, but they are both priced at least 2-5k higher. So, the HP Pavilion x360 makes more sense for those looking to buy a laptop hybrid at this price range. However, if you’re going over the price range and don’t necessarily need a foldable laptop, the Apple Macbook Air is a worthy alternative.