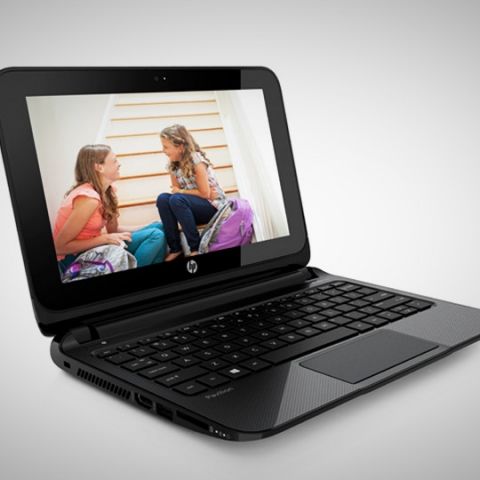 HP's AMD based ultra-mini notebook brings in a rather good set of features at a very affordable price. Meant for someone who needs a computing device for a basic usage scenario. The excellent battery life is a huge bonus.

We thought we had bid farewell to netbooks, for good. But clearly, that's not the case. Now, they are much more expensive than before, aren’t called netbooks, but bring back the option of buying something that is easy to carry around. After dabbling with the 11.6-inch versions for a while, HP has decided to go even lower than what many would consider the lowest limit of a laptop screen size - 10.1-inch. Is this laptop meant for you? Read on to find out.
Build & Design

One look at the Pavilion 10 TouchSmart, and you know that it's trying to get netbooks back in fashion. Happily enough for us, the build quality does not betray the affordable price tag, and you look like you're moving around with something that is a lot more expensive. The dual colour combination of grey and black looks very good, and true to HP tradition, the colour blend is always seamless and looks good. The materials used in its construction are very good, but critically, the matte colours really make this a low maintenance finish. Open the lid, and the familiar island style keyboard makes its way into the Pavilion 10 TouchSmart as well, albeit fitted in much smaller real estate.

The ports are spread around on the right and left side spines. Despite the small size, the variety of ports and connectivity options has not been compromised on - there are three USB ports, with one being the USB 3.0 one, as well as a memory card reader and the HDMI out. Looked at from side on, the Pavilion 10 is thinner on the near side, and thicker where the display hinge sits. This is a fairly profound design element, and unlike how some laptops achieve this via visual and design trickery, this is as real as it gets.

For a machine with a 10.1-inch screen, the Pavilion 10 Touchsmart weighs 1.4kg, which isn’t as light as we hoped it would be. Nevertheless, it is still light enough to not be an issue when carried around. 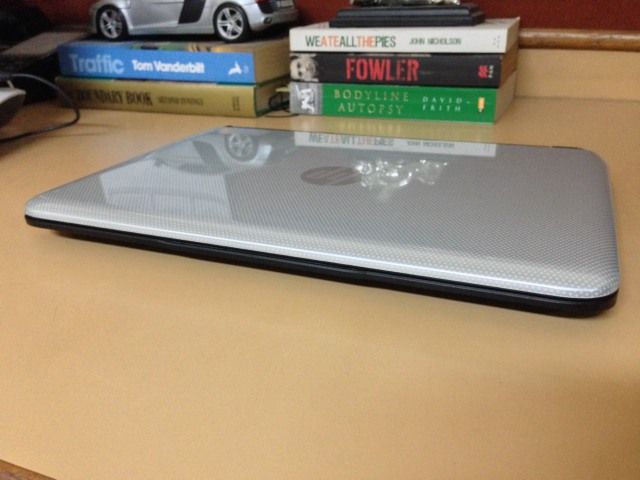 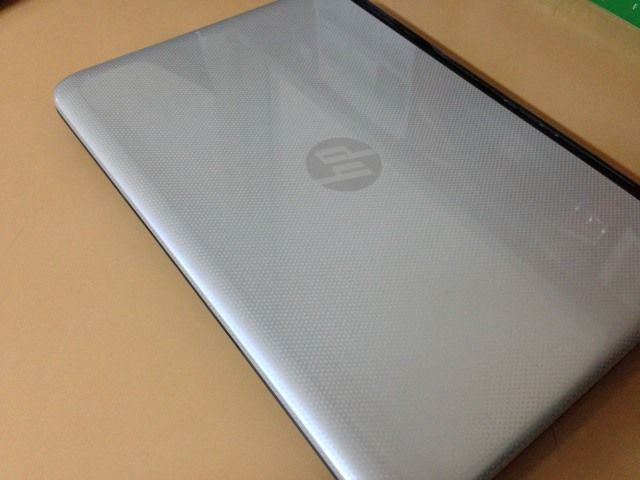 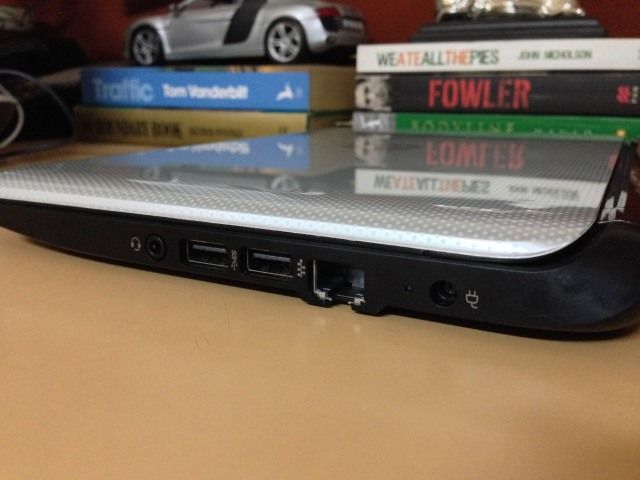 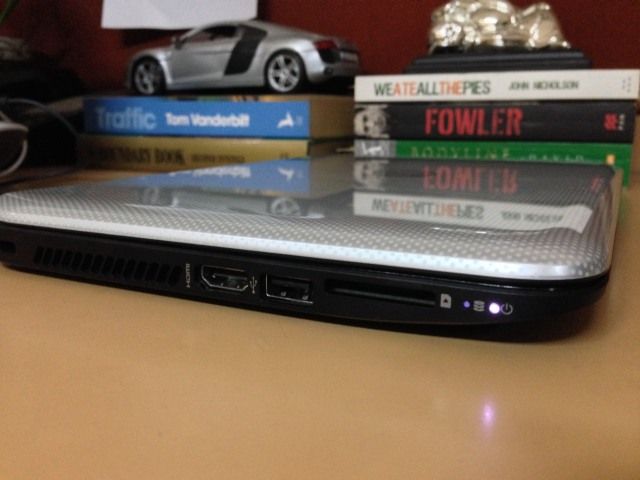 Keyboard
For typing, the Pavilion 10 Touchsmart does have a good foundation to build on. The keyboard has the same island layout that makes it one of the best keyboards on a Windows machine. The Pavilion 10 TouchSmart's keyboard doesn’t have any visible faults, but the limited space means those of you with slightly larger fingers will find typing a bit of an issue. HP has implemented a full keyboard (with standard layout) and in order to fit it in, the keys are smaller than usual. The key response and travel is still excellent, and once you do get used to the cramped layout, it should be smooth sailing from then on in.

Thankfully, there is a generous palm rest area, which also helps with the typing experience. One point of contention is the quality of the touchpad, which is fairly small and doesn’t do well if you are used to a laptop with larger touchpads. The response is fairly accurate though. 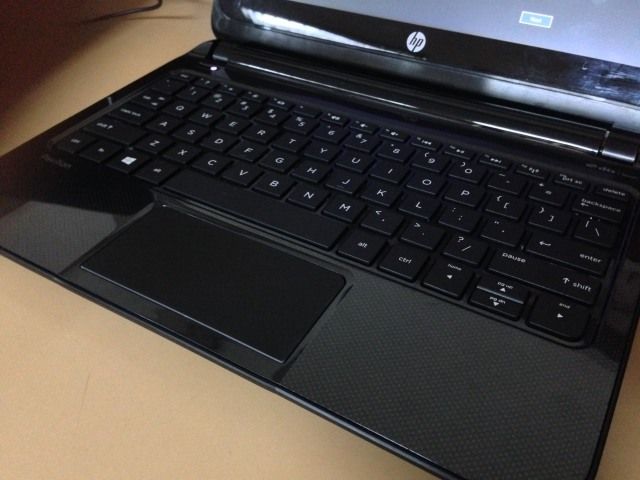 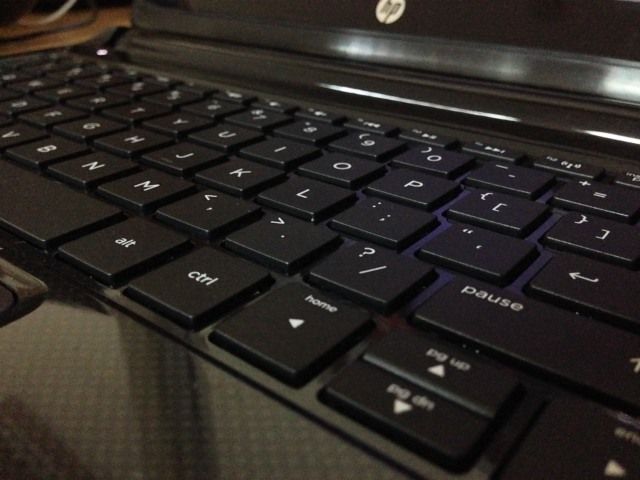 Display
At 10.1-inches, this is perhaps not the best display size to work on, if you are dealing with documents, spreadsheets and presentations. Personally, this screen size is a tad too small to comfortably show all the data you may wish to have on one screen, without having to scroll constantly. If the screen size limitation isn’t a problem for you, then this could do fairly well for you. In tests, this 10.1-inch touchscreen proved to be slightly brighter than the 11.6-inch screen on the Dell Inspiron 11, but that is just a marginal boost. This is somewhat offset by the extremely reflective nature of the screen, for which you need to keep the brightness level above 50% at all times to negate the reflections. Text is adequately crisp, thankfully, and colours look as good as on the Inspiron 11.

Performance
In the affordable laptop segment, your newer choices are mainly restricted between multiple options of the AMD APUs, the Haswell based Intel Celeron processors or if you are lucky to have a budget on the higher side of the price band, then the latest generation Intel Core i3 CPUs. For the Pavilion 10 TouchSmart, HP has used the dual core AMD A4-1200, that is paired with 2GB of RAM. The 28nm chip also includes the Radeon HD 8180 GPU. This SoC, codenamed Temash (specifically made for compact notebooks and tablets) has a rated TDP of 9 watts, which suits the ultra slim devices perfectly. Windows 8.1 comes pre-loaded on the device.

Compare the performance of the AMD A4-1200 with the Intel Celeron 2955U processor based on the Haswell architecture, and you do immediately begin to notice that the Intel chip offers better system and gaming performance.

However, the benchmark scores tell you only half the story. In real world usage, the HP Pavilion 10 TouchSmart feels much zippier than the Dell Inspiron 11, which costs a lot more as well. Windows 8.1 boots quicker, and software responds to your commands a lot better. This just points to one thing - the original Windows installation on the HP machine is much less bloated with free and trial-ware than what Dell blessed the Inspiron 11 with. Between the two, despite what the benchmark scores may tell you, the Pavilion 10 TouchSmart is undoubtedly quicker.

The AMD Radeon HD 8180 GPU shares the main system memory with speeds up to 667MHz, on a 128-bit memory interface. In terms of performance, this should be at par with the Intel HD graphics that come with the Haswell based Celeron 2955U. The benchmark scores do clearly show that the 8210 lags behind the integrated Intel graphics in terms of sheer numbers, but there's not much difference in terms of real world performance. You will be able to play some older games at medium settings, and some lesser graphic intensive games. But, Battlefield 4 and F1 2013 will be unplayable on this.

Battery Life
The Haswell based Intel Celeron in the Dell Inspiron 11 offered excellent battery life and clocked 254 minutes in our battery test. The HP Pavilion 10 TouchSmart takes the game to a different sphere altogether, with the same test returning a time of 374 minutes on a single charge. We have always mentioned, based on testing experience, that AMD APUs are a lot less resource hungry than their Intel counterparts, making them perfect for affordable laptops.

To buy or not to buy?
For a price tag of just under Rs. 30,000, it is tough to not recommend the HP Pavilion 10 TouchSmart. The acceptable performance, excellent battery life and the price will make this a rather enticing prospect for those who are looking for an affordable laptop that doesn’t have a massive footprint. However, if a small screen isn't your cup of tea, then you would do well to consider a laptop with a bigger screen like the Lenovo IdeaPad Z580 (59-382934) and the Dell Inspiron 15 3521.