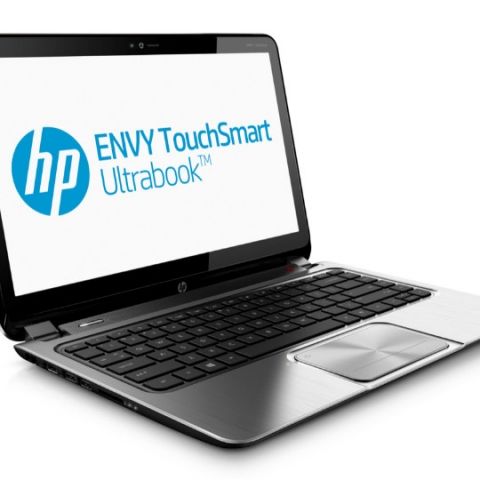 Over time, the addition of the touchscreen has made ultrabooks heavy. However, if you have no problem in coming to terms with that aspect, the TouchSmart 14 ultrabook will undoubtedly impress. Excellent battery life, very good performance and a build quality that is in line with HP’s push towards standardizing the design accents across machines. We are not very sure about the price, because it doesn’t have a dedicated graphics chip. But the excellent keyboard and the crisp display should keep most hard workers happy.

HP has been mentioning the fact that it is looking at a unified design theme across laptops to make the machines more recognizable in a crowd of laptops. And we have been seeing that of late, with the Pavilion TouchSmart 11 being the first. And now also with the bigger sized sibling, the ENVY TouchSmart 14 ultrabook. We would actually love to see that happen, because a unique identity will go a long way in brand recollection, in a market crowded by many brands and many laptops.

Build & Design: The new design philosophy shows
There is no doubt that the ENVY TouchSmart 14 feels solidly built, which is a good progress from the sometimes flimsy feel that some ultrabooks tend to give out. However, there is a tradeoff, in terms of the weight. The TouchSmart 14 weighs just under 2kg, while the its much older sibling, the ENVY 4-1002tx tipped the scales at 1.7kg.

We had just mentioned HP’s new design philosophy that aims at giving all laptops a uniform design. In this particular case, there is no denying that the MacBook resemblance is very much there, as verified by a few people when they saw this laptop for the first time. The lid and the keyboard deck get the aluminum, with a light grey finish that is completely matte and largely texture free. This plain look is rather refreshing, in a day when design elements end up overwhelming the user. This theme is only broken by the black plastic on the underside, which tells you that yes, this is a Windows laptop!

There's no doubting the build quality. The usual tests to see how solid the chassis is, gave impressive results in this case. The lid has very little flex, and when pressed on the back, there is no distortion on the display. Second is the keyboard, which has absolutely no flex anywhere across the real estate. Hold up the machine with one hand applying pressure on the underside and the lid simultaneously, and you won't hear any creaks, something that most ultrabooks cannot claim.

The HP is Nice to look at and solidly put together - we believe these are some positives that will make up for the slightly heavy form factor otherwise.

Display: Good for reading on, but poor contrast
We have tested a lot of touchscreen laptops now, and to be honest, there really isn’t much to choose between them in terms of the touchscreen quality and response. All of them seem equally competent, for what they are.

What we have with the ENVY TouchSmart 14 is a 14-inch screen with 1366 x 768 pixels resolution. For starters, this screen is fairly glossy and reflective. This is an issue that plagues almost all of HP’s non-business notebooks, in varying degrees. However, the saving grace is that this is natively quite a bright screen, and that sort of balances out the reflections at brightness levels above 50%.

This good brightness level is coupled with adequate sharpness levels, giving the final reproduced image a rather purposeful aura. Text can be read easily, and the Windows 8 UI tiles look extremely lively.

However, this display does disappoint in terms of contrast and colour richness at brightness levels around 60% and above. The blacks don’t look deep, and the colours have a “cool” tone, which makes them look washed out most of the time. For multimedia playback, this screen isn’t really the best.

Keyboard: The perfect dish has been tweaked
The last few HP notebooks we tested featured some of the best keyboards ever on Windows laptops. Yes, we say that with the utmost confidence, hand on heart. They had consistent design in line with traditional layout, unlike how Lenovo likes to tweak that on each and every laptop they make nowadays. The key size and design is very close to that of the MacBook Pro 13 Retina, which again is something most Windows laptops really cannot boast of. Travel is precise and pretty much what you want, but critically, every key press gives a sharp response, which just makes it that much better to type a document on.

Inexplicably, HP has done something that spoils this experience. As always, the keyboard sits on a base that is slightly lower than the palm-rest area and the touchpad, and that almost always blends together smoothly, so much so that most people would not even realize the elevation difference. In the case of the ENVY TouchSmart 14, this elevation difference is marked by rather sharp edges , which have the potential to hurt you. One example of such a scenario is when you may be moving your finger from the spacebar back down to the touchpad. These sharp edges run around the keyboard, and can get a bit uncomfortable.

A design element worth noting is the red strip running around the keyboard, possibly to signify the Beats Audio goodness, that acts as a good visual element.

Performance: Dedicated graphics are missing
The TouchSmart 14 has an Intel Core i5-4200U processor, from the Haswell family,  and the same one we saw on the Sony Vaio Pro 13. This is paired with 4GB of RAM, and the Intel HD 4400 integrated graphics. Unlike the Vaio Pro 13, which had a very fast SSD, the TouchSmart has a standard 1TB hard drive.

The performance numbers are consistent, but not better than the likes of the Core i5-3317U or the Core i5-3230M that we have seen in many notebooks and ultrabooks. If you were expecting quicker system performance from the newer Haswell Core i5, as compared to the two Ivy Bridge ones, then that really isn’t the case. In the PC Mark 07 test, the Core i5-4200U clocked a score of 2742. The Intel Core i5-3230M on the Lenovo Z400 Touch registered a score of 2687 while the Intel Core i5-3317U in the Asus VivoBook S550CA got the highest among all - 2966 PC Marks.

Having said that, it is important to mention that the real world usage experience is all neat and smooth, as consistent as the Ivy Bridge ultrabooks all along, which used the 3317U processor. This pretty much means that you can take liberties with the amount of multi-tasking load, and the TouchSmart 14 will handle it with the proverbial smile on its face.

Graphics are powered by the Intel HD4400, which gives marginally better performance than the HD4000 (Ivy Bridge), at least as far as the frame-rates are concerned. All in all, while it is an improvement over the predecessor, this particular solution is a very minor improvement.

Battery Life: 6 hours on a single charge, in office
The truly amazing improvement with Haswell is the battery life backup times that we are clocking. The Vaio Pro 13, with the same processor and an SSD clocked 200 minutes. The TouchSmart 14, with a 1TB hard drive, registered 251 minutes in the battery benchmark test. With 4.5 hours in the benchmark test registered, we used this machine as a primary laptop, and the battery lasted around 6.5 hours with brightness set at 70%, Wi-Fi connected throughout and music playback via iTunes for a couple of hours in-between.

Bottomline: Only if you want an ultrabook with the latest hardware
The HP ENVY TouchSmart 14 ultrabook will certainly appeal to someone who has been captivated by the term “ultrabook”, and only wants the very latest hardware while at it. On most fronts, this machine is a delight - excellent build quality, keyboard is easy to get the hang of and the battery life makes it all worthwhile. But, for this price, the lack of dedicated graphics is rather perplexing. Impresses nonetheless.