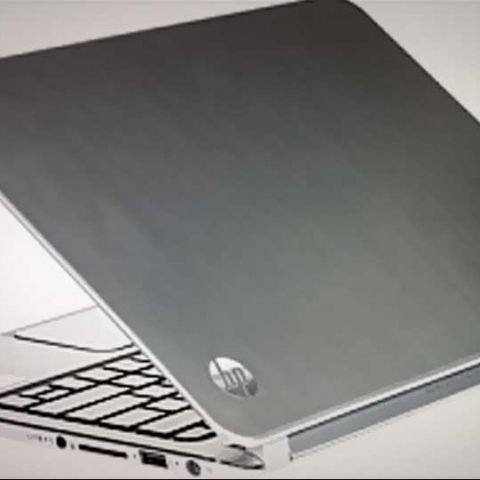 The Spectre XT's resemblance to the MacBook is uncanny, and for someone who doesnï¿½t look closely the first time around, this confusion is more than acceptable. Featuring exquisite build quality and sophisticated design, the Spectre XT is very close to the Samsung Series 9's amazing overall package - for almost half the price. An amazing ultrabook, the Spectre XT provides very good performance, lifting it to a solid second place in our ultrabook Top 10.

We have tested some very well built ultrabooks, and the Dell XPS 14 and the Samsung Series 9 are prime examples. The HP Spectre XT needed to be on the top of its game if it has to come even close to the other two, and we happily report that it has done exactly that!

Build & Design
The HP Spectre XT’s magnesium alloy frame lends it a whole lot of solidity, despite maintaining very slim form factor. The lid has the brushed metal finish, much like the Envy 4 (read our review), but in a lighter silver colour. This colour theme carries on throughout the ultrabook, as is. While those little curves and hues are very similar to the HP Envy 4, the brighter colour makes the Spectre XT feel bigger than it actually is. The finish does not catch any fingerprints, and any dust settled on it doesn’t show up immediately.

The lid hinge design is very similar too, but in the Spectre XT, the screen sits slightly higher with a distinct gap between bottom of the lid and the keyboard deck. Parallel layers of cooling vents on the underside helps with the ventilation. Ports are distributed on both side spines. No optical drive, as you would have imagined. Build quality is pretty much on par with the best of the ultrabooks out there. And do keep in mind that the Dell PS 14 (read our review) and the Samsung Series 9 are considerably more expensive than the Spectre XT. The Samsung Series 9 is the slimmest, but the Spectre XT compromises a bit of that for additional ports.

I was actually amused when I asked my wife to pass me the HP Spectre XT which was sitting on the table next to her, and she remarked (genuinely aghast), “Oh, I thought this was the MacBook Air”. If I were in HP’s shoes, I would take that as a compliment!

Features & Performance
The Intel Core i5-3317U processor clocking at 1.7GHz and 4GB of RAM powers the Spectre XT that we received for review. This is pretty much in line with the ultrabook specifications in this price bracket.

The interesting bit is the 128GB SSD that the HP Spectre XT packs in. This gives it a huge performance advantage over the rivals who mostly have an HDD along with an mSATA SSD for caching tasks.

Where the Spectre XT compromises a bit is with the graphics. There is no dedicated graphics card, with just the Intel HD 4000 taking charge of the very limited gaming capabilities.

The 13.3-inch display has a 1366 x 768 pixel resolution. As against its sibling’s display, the Envy 4 ultrabook, the Spectre XT is brighter and slightly sharper in terms of text reproduction. That being said, the same reflective nature is prevalent here as well, which will somewhat ruin the experience of using it in any brightly lit environment. But there are the good things still - the black level test results pegged the scores in the top half. Also, watching videos on this screen is a lot of fun, since the colour vividness is quite good.

When we saw the Beats Audio branding on the HP Spectre XT, a grimace was in order! Not again, we said! But the fact is simple - the speakers are rather good. Maybe the reason is that there are four speakers – two upward firing and two down firing. And when we say the speakers are good, we mean the Spectre XT bears among the better laptop speakers out there in terms of clarity and holding its solidity as you go higher up the volume graph.

Till now, the SSD on the Series 9 had the best performance, but the Samsung PM830 series 128GB SSD on the Spectre XT trounces that rather easily. This ultrabook now has the fastest SSD, at least among the ones sold in the Indian market.

The lack of a dedicated graphics chip ensures that the lesser-priced sibling, the Envy 4-1002tx, ends up with better overall performance scores. So much so that the Radeon HD7670M on the Envy scores the best in the graphics test among all ultrabooks we have tested. But we would not read much into that considering the major demographic considering an ultrabook would look for performance, slim form factor and specs that should ideally include a full-fledged SSD, with the graphics card being a secondary concern.

The tested battery life is 187 minutes on the Spectre XT, and there is no running away from the fact that it is lesser than the best out there – Samsung Series 9 (246 min), HP Envy 4 (223 min) and the Dell XPS 14 (210 min). But, in a typical real world usage scenario, the backup times are very similar to the best ultrabooks out there. We used this machine for our regular office work, and it managed 5.5 hours from full charge to full discharge, with Wi-Fi connected throughout and brightness down to 50%.

The Spectre XT’s keyboard is excellent to work on, with precise feedback perfect for quick typing. The key size is very similar to MacBook Air’s keyboard, and so is the overall layout. Unlike the concave keys (inward dip in the middle) that have become a fashion, this keyboard has flat key design. It provides very sharp response with adequate key travel – very much the experience as offered by the MacBook Air, and that is a huge compliment.

Bottom Line
Why we keep comparing this to the Series 9 is largely because 1) The Series 9 is the best overall performing ultrabook, and 2) We want to establish that for a lot less, you can get almost similar performance in a largely identical form factor. The HP Spectre XT is possibly the best affordable ultrabook you can buy at the moment, if slimness, exquisite build quality and a speedy SSD out of the box are critical aspects for you.