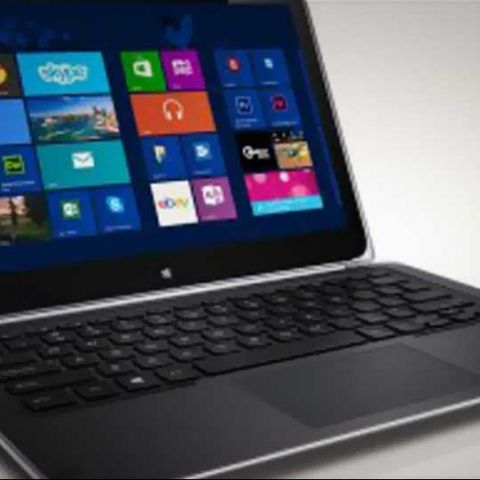 Dell has carried out the same excellence from the XPS 14 as far as design and build is concerned, with the Dell XPS 12 Convertible Ultrabook. The display flip is a very unique feature to have. Performance is fairly acceptable, but the cherry on the cake is the battery life. But like most of these convertibles, they work better as laptops than as tablets. None of that takes away from the fact that you are paying a premium for the entire package because of the form factor.

Windows 8 has fairly confused laptop and ultrabook manufacturers, who suddenly seem to have caught the “let’s make this a tablet” bug. In reality, all these so-called convertible devices are better off when used in the conventional laptop and ultrabook mode. The “best of both worlds” approach, unfortunately, ruins two very perfectly good ideas – laptops and tablets.. What Dell has managed to do with the XPS 12 is still do some damage control.

For starters, we must say that the use of materials on the Dell XPS 12 Convertible Ultrabook is largely the same as that of the Dell XPS 13 and the XPS 14 ultrabooks. And that oozes class and sophistication right out of the box. The Dell XPS 12 Convertible Ultrabook’s chassis is made from machined aluminum, while the frame of the device, including the flip hinge, is anodized aluminum. While the XPS 14 had a heat-channeling layer of silicon on the base, the XPS 12 doesn’t have that. Not a big omission though.

We have to admit, the Dell XPS 12 Convertible Ultrabook looks very sophisticated. It will be equally comfortable in the midst of a college-going crowd as in a boardroom. The slim form factor should appeal to everyone. The matte finish lends a soft touch and makes the unit comfortable to hold.

The unique design element of Dell XPS 12 Convertible Ultrabook’s design is the rotating display. Connected on two sides, you need to push back softly at either the top, or push towards you from behind the display at the bottom, and the display will rotate 180 degrees. Now, this is useful if you want to show something to someone sitting across the table, or to fold over the keyboard and collapse into sort-of tablet mode. Unfortunately, there seems to be no lock when the display is set on the conventional ultrabook mode, and that can be an inconvenience if the laptop is subjected to sudden jerks or handled slightly roughly.

The Dell XPS 12 Convertible Ultrabook’s frame housing the swivel display is very thin, but the anodized aluminum ensures it is strong enough. Dell has tried to calm down all apprehensions, and says that this mechanism has been tested for 20,000 use cycles. However, we would suggest not being rough with the machine at all.

All ports are placed on the two sides of the Dell XPS 12 Convertible Ultrabook. The right side has two USB ports and a display port, while the left side has the volume rocker, the power key that is actually a slider and the 3.5mm jack for headphones.

On the underside of the Dell XPS 12 Convertible Ultrabook, the cooling vent design is exactly like what we have seen on the XPS 13 and XPS 14 ultrabooks, and really keeps it cool. Although the machine feels very slim in ultrabook mode, switch it to the tablet mode and the thought changes to “It is bulky”! A friend pointed this out, and when you think about it, seems to be fairly true.

In terms of power, the Dell XPS 12 Convertible Ultrabook is pretty much the conventional ultrabook. The processor is the Ivy Bridge Intel Core i5-3317U clocking at 1.7GHz, with Turbo Boost taking it to 2.5GHz. We have seen this processor in a lot of ultrabooks since the summer of 2012. There is 4GB RAM along with that.

For storage, the Dell XPS 12 Convertible Ultrabook offers a 128GB SSD, which is a fairly quick drive, something that will talk about in detail in the Performance section.

The Dell XPS 12 Convertible Ultrabook’s 12.5-inch display has a Full HD resolution of 1920 x 1080 pixels. From the outset, the performance is very impressive. It was a fear that this resolution on a small display may actually be detrimental, but in this case, those fears don’t hold true. Text has been adequately enlarged so that it doesn’t become too small. Colour handling is extremely good. The brightness level is slightly lesser than the likes of the Samsung Series 5 and the Toshiba Satellite U840, but is more in line with the HP Envy 4-1002tx. Auto brightness, when activated, makes a profound difference, something that isn’t visible to this extent on most other ultrabook. Dell XPS 12 Convertible Ultrabook handles video playback brilliantly, and you can jump forward and back on an HD video timeline without any lag or stutter.

However, the Dell XPS 12 Convertible Ultrabook’s display’s black levels, specifically, could have been a bit better. The only niggle that will become quite a bother for some users is the reflective nature of the display. Even at full brightness, you will still be getting reflections off the ambient environment

The convertible feature of the XPS 12 is something that you are definitely paying a premium for, because you can get a similarly performing (or even better) ultrabook for lesser. The display can go back 180 degrees, and come back the same way. While you may not really use this in most cases, the suits in a corporate setup would love showing this off to those terrified minions huddled across the table! Alternatively, swivel the display and close it on its head and what you have is essentially a tablet. While it is all fair and good as a tablet, a 12.5-inch display size with the weight of what is essentially a full-fledged ultrabook makes this a tad too heavy for that usage pattern.

Windows 8 works brilliantly with touch, but that isn’t to say that those who are using it with the keyboard and touchpad hardware are missing out on anything. For the tablet mode, the usage is quite fun, but the sheer bulk of the Dell XPS 12 Convertible Ultrabook restricts convenience.

The Dell XPS 12 Convertible Ultrabook’s power package is at par with a majority of the ultrabooks we saw launched in the year 2012. And that shows in the benchmarks tests, which peg the XPS 12 on the same level as the others, which include lesser-priced models. The PC Mark 07 test scores fall within a fair range. The XPS 12 scores 4734, while the Satellite U840 scores 4220 and the Samsung Series 9 scores 4647.

While the Dell XPS 12 Convertible Ultrabook’s benchmarks indicate fairly similar performance to the rival ultrabooks with the same processor, in real world usage, the power doesn’t show. The boot up time is fairly quick because of the SSD, but beyond that, it feels slightly slower than the likes of the HP Spectre XT and the Dell XPS 14. This is mostly to do with the way the processor is clocked, to keep the heat to a minimum and enhance battery life.

Speaking of which, the tested battery life on the Dell XPS 12 Convertible Ultrabook is 5 hours. The stress test was done on high performance mode with the brightness set at 100%. This means that when you are using the machine in a typical usage scenario in office, this could get you through the 8-hour day on a single charge. This is brilliant either way, as an ultrabook or as a tablet.

The Dell XPS 12 Convertible Ultrabook from Dell is a device that is not meant for everyone. Yes, it is an ultrabook, but for almost Rs. 90,000, you do pay a significant premium for the freedom to use it as a tablet. If you want an ultrabook, you could get lot better options for a lot less. If you want a device with a tablet capability, then the XPS 12 does make sense, but that will be applicable for a very limited demographic. However, if you do decide to buy this, it will be money well spent, as long as you can justify paying for a convertible ultrabook. The build quality is brilliant, and the battery life is possibly the best part about this device.