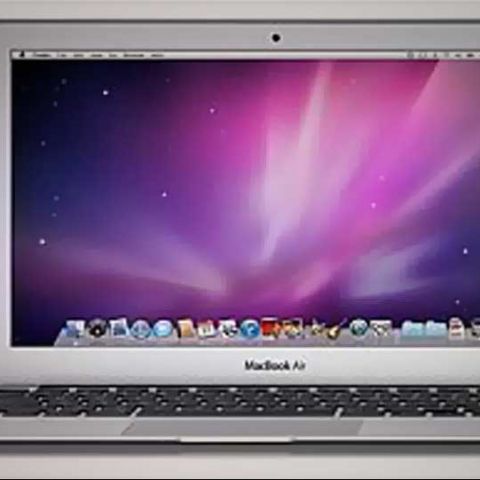 The 11-inch MacBook Air continues to define the premium ultraportable laptop segment. From its uni-body aluminium chassis, to its razor thin profile, the 11-inch Air does more than just look pretty -- it comes equipped with a powerful Intel Sandy Bridge Core i5 processor that helps the slimmest MacBook ever deliver quite a performance punch.

The first generation Apple MacBook Air launched back in 2008 won universal acclaim for its slim design but the device lacked good hardware chops. Three years on and the slimmest, smallest MacBook Air ever borrows the same svelte design from its predecessor but now packs a powerful performance punch with the new Sandy Bridge Intel Core i5 processor, 4 GB of RAM and a 128GB of SSD. The Cupertino based company offers two more variants - a cheaper model featuring the same Core i5 processor but with 2 GB of RAM (upgradable to 4 GB) and 64 GB SSD or a higher end model featuring a Core i7 with 4 GB of RAM and 256 GB SSD. Let’s see what else is new with the 11-inch MacBook Air.

Features
The biggest change on the Apple MacBook Air comes in the form of the system’s internal hardware. The device is now powered by Intel’s new Sandy Bridge Core i5-2567M processor running at 1.6-GHz. An additional 4 GB of RAM, in-built Intel HD Graphics 3000 and 128GB SSD completes the basic spec sheet. The 11-inch screen has a native resolution of 1366 x 768; we have absolutely no complaints here as the screen is quite bright and boasts of better-than-average viewing angles.

A major disappointment of the MacBook Air -- or for that matter any ultra-thin laptop standing a few millimetres tall -- is its lack of connectivity ports. The 11-inch model gets only two USB 2.0 ports, one each on either side. A MagSafe power port, a headphone jack and a microphone fill the left side of the device, while just a Thunderbolt port along with the aforementioned USB 2.0 port fills the right side. Wireless connectivity is taken care of by Wi-Fi b/g/n and Bluetooth 4.0. As is evident, the 11-inch MacBook Air is one for the truly mobile consumer.

The Thunderbolt port is one of the biggest additions to the new MacBook Air line up, with transfer speeds shooting upto 10 Gpbs i.e. 20 times faster than a USB 2.0 it is definitely a boon to have it up your sleeve. In time, the number of peripherals that utilize the technology will only go up.

The Trackpad supports a whole list of multi-finger gestures that are now incorporated on the Mac OS X 10.7 Lion operating system which is bundled natively with every new MacBook Air. You might take sometime to remember each of these gesture based commands but once mastered it saves a lot of time while doing various tasks and the experience becomes highly intuitive.

Another biggie is the inclusion of backlight for the keyboard. Not only do the keys light up but also the labels on the keys come to life. What’s more, the MacBook Air features an ambient light senor that automatically adjusts the brightness of the display as well as the keyboard. Working in the dark never seemed better, the backlighting works like a charm.

Design and Build
The new MacBook Air doesn’t see a lot of change in terms of its design. It is as thick as 0.11-inch at its thinnest point and 0.68-inches at its thickest. It weighs a mere 1.08 kg. What has changed though is the keyboard, whilst the key placements remain same, the keyboard sees new tag for the F3 and F4 buttons that display the new features of the Mac OS X Lion. Further, the F5 and F6 button helps you control the backlighting of the keyboard. 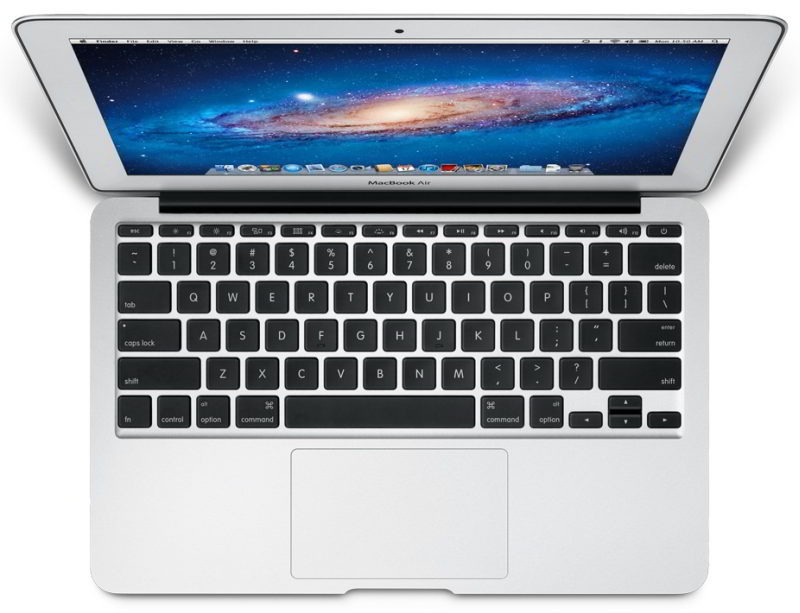 The 11-inch MacBook Air’s trackpad is big and very responsive; the clickable buttons are easy to press and subtle with their sound. The full sized keyboard offers great tactile feedback and the spread out chiclet style keys make typing blazing fast. Further, the Apple MacBook Air gets the plush palm rest as seen on the bulkier MacBook Pro making typing a much nicer affair. Though the display lid is extremely thin the aluminium shell makes it rigid; no way does it feel fragile. The uni-body aluminium chassis gives the device a very sturdy build.

Click next to read more about the MacBook Air 11.6-inch's performance, and our verdict...

Performance
To benchmark the MacBook Air, we installed Windows 7 via Boot Camp Assistant and then ran all the tests. With the new Intel Sandy Bridge Core i5 processor the performance was never going to be an issue. The MacBook Air scored an amazing 8713 score on our PC Mark Vantage test; suffice to say that this device is quite fast and delivers performance unexpected of its tiny frame. It’s definitely one of the best performing ultraportable laptops we’ve tested this year. Light gamers too won’t be disappointed, the 11-inch Apple MacBook Air scored 4232 on our 3D Mark 06 test; running older games on medium setting shouldn’t be a problem. 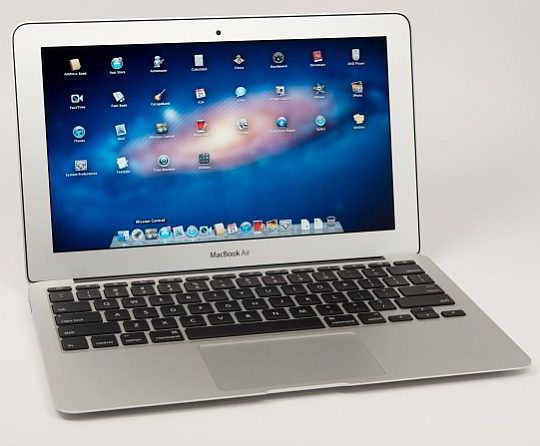 Copying a 4GB single file was lightning fast at 73 secs and copying a 4GB folder file took a mere 140.9 secs, thanks to the SSD that is lurking inside. The HD video playback was pretty satisfactory, although audio from the Air’s tinny speakers left a lot to be desired -- however, plug in headphones and the laptop’s back in business as an in-flight entertainment device.
In our battery test, the MacBook Air at high-performance preset and max brightness made our test video loop for just over 2 hours. We expect the MacBook Air to give more than 3.5 hours of usage at a more considerate power plan, which is very good for an ultraportable laptop of 11-inch form factor.

Verdict:
Finally, the 11-inch ultraportable MacBook Air is no longer just a looker; running on Core i5 with 4 gigs of RAM and with the touch-enabled Mac OS X Lion in its heart, the MacBook Air definitely seems to be a formidable player in the ultraportable category. Overall the new MacBook Air is an excellent upgrade to the original device. If you are in look out for an ultraportable laptop that can deliver top notch performance and if you have fat pockets, we have no issues in recommending the MacBook Air -- it is still the most highly desired ultraportable laptop. For those who don’t have deep pockets we suggest you look at the Acer Aspire S3 - an inexpensive Windows counterpart.