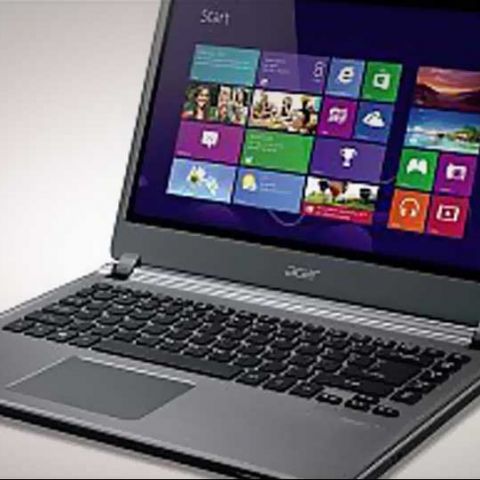 In case of the Acer Aspire M3 Touch ultrabook, we recommend that unless touch is an absolute necessity for you, you should choose one of the more conventional ultrabooks around the Rs. 60,000 mark, which will offer better overall performance. The HP Spectre XT makes the most sense around this budget.

The year 2013 will be big – laptops and ultrabooks will begin to come with touchscreens, and the hybrids will rise up as well, just to annoy the tablet and the ultrabook! The Acer Aspire M3 Touch (known as the Aspire M5 Touch aboard) is one of the first touchscreen ultrabooks to hit the Indian market, and we put it through its paces at our test centre.

Build & Design
Acer Aspire M3 Touch has fairly basic looks, but will work with a wide demographic of potential users. This is an ultrabook, but doesn’t shout about its slimness. Packs in an optical drive as well, and that is a huge bonus. The black colour has a matte finish throughout, and that does look understated and sophisticated. A bit bland too, some may counter, but then again, the Aspire M3 Touch will appeal to a wider demographic of users than an ultrabook with a crimson red lid!

The matte black finish on the Acer Aspire M3 Touch is the same on the lid and the keyboard deck. The machine is a tad thicker than most ultrabooks, but has an optical drive on the left side. The right side seems to be absolutely clean, which perplexes us a bit, wondering why Acer wants you to have to reach behind the display to get to the USB, Ethernet and HDMI. It is certainly not the ideal port placement, and could have been implemented a lot better.

The Acer Aspire M3 Touch’s build quality is fairly acceptable, and despite the use of materials that don’t feel very premium when touched, there is still no flex on the chassis. The fan tends to be slightly noisy when the machine is stressed, but with the vents at the back, you will not feel the draft of uncomfortable warm air.

Features & Specifications
The Aspire M3 Touch has a fairly basic spec sheet – Intel Core i3 – 3217U processor clocking at 1.8GHz, and supported with 4GB of RAM. We are a tad surprised to see a Core i3 processor in a machine that sports a price tag slightly upward of Rs. 60,000.

But what is interesting is that the Acer Aspire M3 Touch packs in an Nvidia GeForce GT640M (2GB) graphics chip. This is a fairly powerful graphics package, and the benchmark tests will prove that. We will give you the details in the Performance section.

The Acer Aspire M3 Touch’s 14-inch display has a resolution of 1366 x 768 pixels. In terms of quality, the display is just very good. It has fairly punchy brightness levels and colour vividness is slightly better than the elder sibling, the Acer Aspire S3. Crispness is fairly good, but interestingly, text doesn’t seem that sharp at times. The touchscreen feature is why you are paying a premium for the M3, and for that bit, the response is rather assured. The only issue is the display hinge is not the strongest around, and every time you tap the display, it rocks back. And it isn’t ideal to hold the display with one hand every time and use the touchscreen with the other!

The Acer Aspire M3 Touch’s keyboard is comfortable to use, with good key placement and adequate travel. Pressing hard in the middle does bring out some dip, but that will not be visible when typing normally. The number pad on the right side means that the alphabet keys are left aligned, and that takes a bit of time to get used to. Apart from that, the touchpad has generous amounts of real estate space available.

The Acer Aspire M3 Touch that we got as a review unit has a 500GB hard drive, and Windows 8 (64-bit) preloaded. However, there is just a tad too much preloaded content – apps, trials and utilities, something that could be cut down on, or better streamlined within one app.

Performance
In terms of what the Aspire M3 offers, it is a bit of a mixed bag. The Core i3 processor does have its limitations. The benchmark scores prove that, and even in real life, this machine will not be the fastest one around. While this would have been acceptable for an ultrabook under Rs. 50,000, it surely would seem like a huge compromise at this price. With Windows 8 on board, you will surely get slightly better performance than you would on the same machine with Windows 7, but that does not say a lot. We are not discriminating against Core i3 machines, but at this price, this package is rather unbelievable.

Battery life is the proverbial cherry on the cake (and perhaps the biggest reason for the inclusion of power-sipping Core i3 processor). The tested battery life of 266 minutes is pretty much beating the best out there – 246 minutes scored by the Samsung Series 9 and the Lenovo ThinkPad X1 Carbon. This one pretty much is the ultrabook that you need if battery life is critical for you.

Bottom Line
The clear issue with the Aspire M3 Touch is the price. The performance is fairly in line with an ultrabook costing less than Rs. 50,000. The graphics performance is excellent, but with the processor being the bottleneck, overall performance will get reined in quite often. The touchscreen capabilities are rather unique, and work quite well for the most part. The display hinge does make touch somewhat annoying, but that is the feature you are actually paying a premium for. But we are not very sure if you should. Unless touch is an absolute necessity for you, for some reason, we would urge you towards one of the conventional ultrabooks around the Rs. 60,000 mark. The HP Spectre XT makes the most sense around this budget.