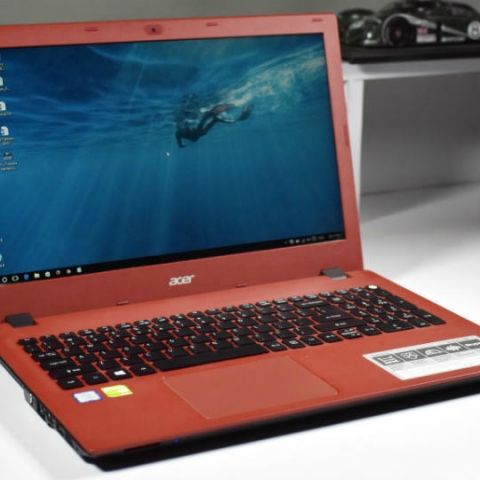 Acer E5 is a good daily use laptop from Acer which can double up as an occasional gaming machine if required. At around 65K it offers one of the best performance to price ratio making it a very good buy for buyers who just want performance at a lower price tag.

From the past few years, Acer's E5 series of laptops have offered overall good performance giving the user a bang for his buck when compared to other laptops in the same price range. Acer's E5 series has held a tradition of average looks and a decent build. These laptops generally perform well and come with a decent build and on first glance, it seems, that is not going to change with the new Acer E5-574G. Yes, the internal hardware has been upgraded, but the major change comes in the form of a design tweaks which are added to the laptop. But, has Acer done enough to strive ahead of the competition? We used the laptop as our daily driver for more than a week and this is our verdict on the Acer E5-574G.

Design and Build
Like we mentioned, the E5 series has seen a design change with this latest update. While all previous generations of this series had a smooth texture all around, this year, Acer has gone for a coarser brushed metal feel. It reminds us of the Lenovo Ideapad G-series laptops which offered a similar finish. We found the build quality of the Acer E5-574G to be satisfactory but there is scope for improvement considering the price point at which the laptop is selling which is higher than Rs. 60,000. The base of the laptop is not too sturdy and appears to bend inside if you apply a little pressure. The lid and keyboard housing are made of plastic. It looks like acer has cut corners with the build to offer customers better specifications on this laptop. One thing we discovered while using this laptop is that people with small hands may find the large trackpad and the large palm rest a slight hindrance while typing as their forearm will brush along the bottm edges of the laptop which are slightly sharp. 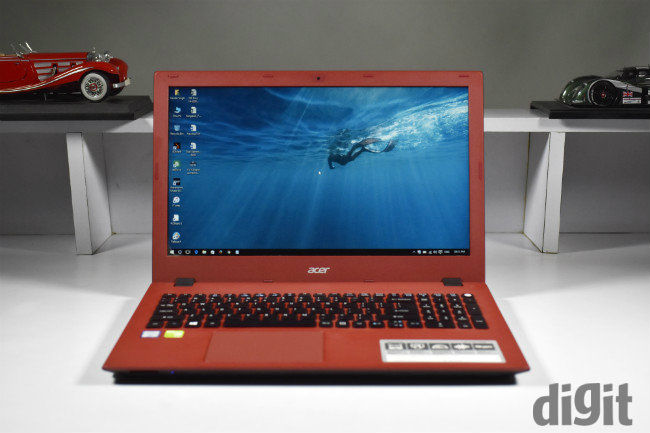 Moving on to the ports, the Acer E5-574G houses a VGA, Ethernet, HDMI, along with two USB 3.0 ports on the left side. On the right the laptop has the proprietary power port, a DVD writer and one USB 2.0 port. You also have the Kensington lock on the left. The exhaust vent, like other Acer laptop, remains on the left side. There are five rubber feet at the bottom of the laptop. These rubber feet hold the laptop in place when placed on a desk and provide stability when opening and closing the lid. The bottom battery bump does however present hindrance while using the laptop on your lap. 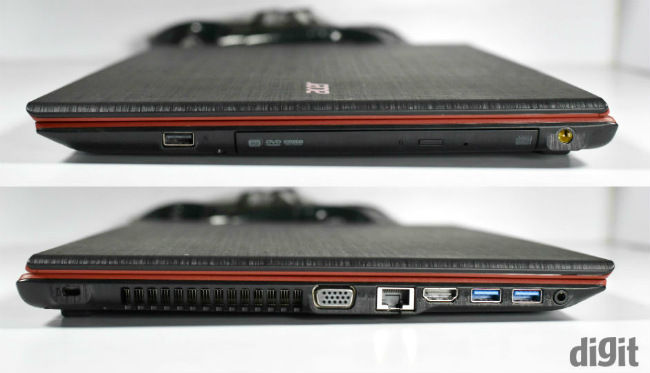 Keyboard and Touchpad
Coming to the keyboard, it is the standard island type keyboard that we have seen on a number of laptops. The positioning of the power key is similar to what we have seen on the MacBook which is to say that it is a part of the keyboard layout resting on the right of the "End" button on the top right corner. During usage at times we accedently pressed the power button which shut down the laptop. Also, we would have prefered if Acer would have accommodated the volume and brightness function keys on the top row itself rather than the arrow keys where it is. 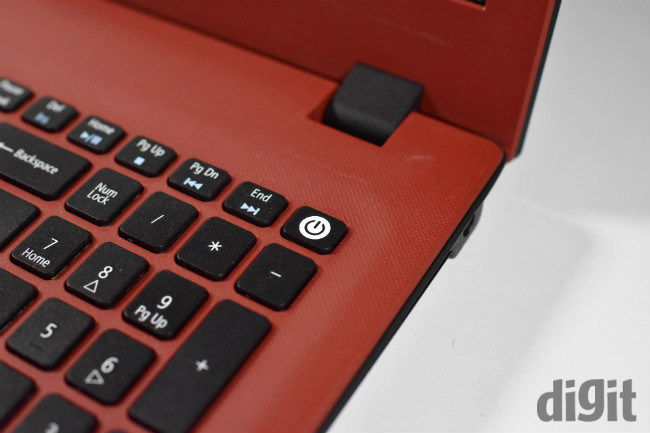 The full island type keyboard is quite normal to use. The keys are evenly spaced and the key depression is short but the keys have clear pressure points. There is very little flex in the keyboard. The flex isn’t noticeable unless you try to game on it enthusiastically. While we would have appreciated a backlit keyboard at this pricepoint, the keyboard on offer gets the job done so long as you can see the keys. 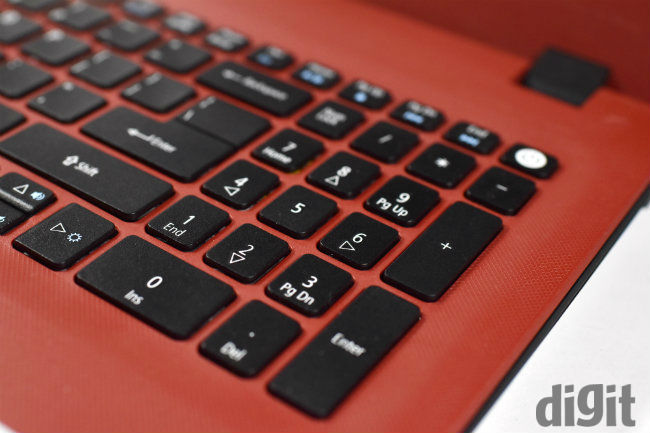 Moving on to the large touchpad, it is off-centre, towards the left keeping it below the spacebar. It is smooth and responsive and offers an integrated clickpad as well. There is enough room on the trackpad to use gesture controls. All in all, it's performance was in tandum with expectations and we didn’t find any issues with it during this review. We would like to add that if you want to game on the laptop you would do better to invest in a mouse. 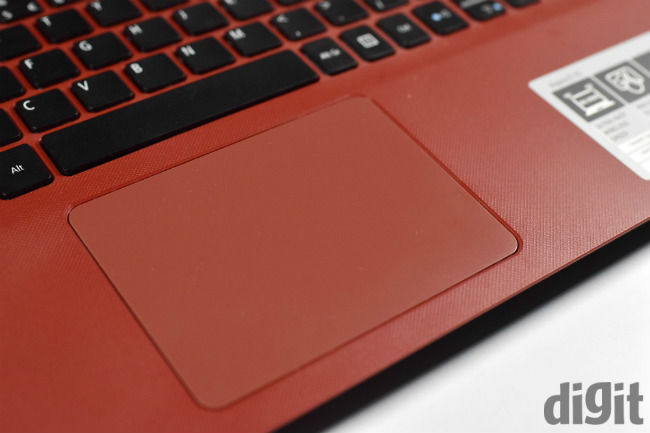 Display
The 15.6-inch display has a resolution of 1366x768p. Considering the price point, we would have appreciated a full HD panel. The panel used on the Acer E5-574G is a glossy one and a very reflective. Using the display outdoors under sunlight isn't ideal. You will have to adjust the display and your seating position to get to the sweet spot where you can see content on it. Using the laptop indoors is a far better expereince. The display is still reflective and you can see reflections of objects behind you as soon as darker shades appear on screen. An ideal example of this is if you are watching a movie and a sequence in the night is playing on the display, you will see more reflection than content. 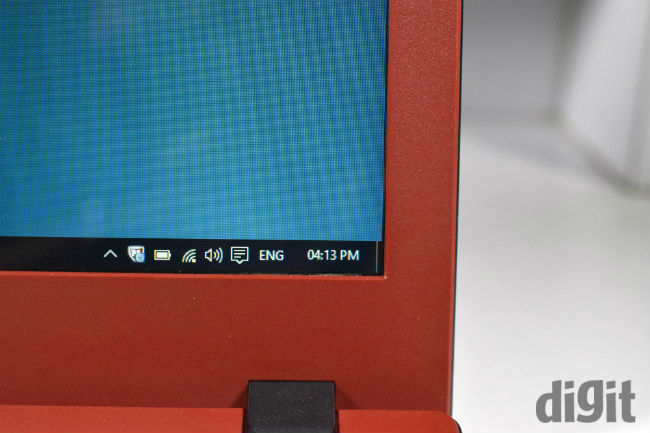 Performance
While the display of the laptop has “average” written all over it, the Acer E5-574G actually churns out some decent performance. Powered by a 6th gen Intel Core i7 6500U processor, the laptop can handle all tasks with ease. There is 8GB of DDR3 RAM on board which is sufficient for multitasking as well as gaming. Sticking with gaming, the laptop has the Nvidia GeForce 940M graphics card with 4GB GDDR3 memory. It is not the best when it comes to high-end gaming but if you want to play casual games, it won’t disappoint. Graphically demanding games such as Mortal Kombat X and Witcher 3 did run at at 25 to 30 FPS depending on the action on screen rendering them playable. We did however have to change the games settings to low or medium depending on the game. We recommend you keep the laptop on a table while gaming as it needs some breathing room. This is because it can get quite hot during long gaming hauls. The laptop provides 2TB of storage which is ample and offers decent boot times. The stereo speaker setup available on the laptop is good. It is not that loud but it sounds just right and even at full volumes and distorts occasionally.

Battery
The laptop survives for about 4 hours on a full charge which is good considering the package on offer. While using the machine as a daily driver, typing on Word, opening multiple tabs and watching the occasional youtube videos, the laptop was lasted for 3 and half hours. When it comes to gaming, the battery drops from 100 to 50 percent in about one hour. Playing games on the laptop while its running on the battery also reduces the output of the GPU. so if you are going to game on the laptop, we recommend you leave it plugged in. 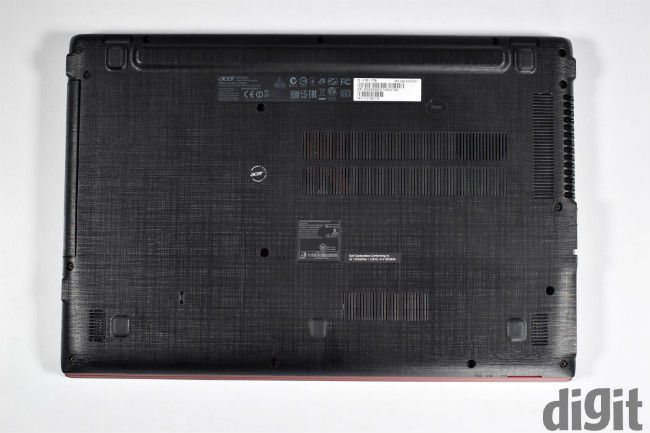 Bottomline
The Acer E5-575G is a jack of all trades. It's a decent laptop with an understated design. The laptop also showcases reliable performance. Its strengths lies with its performance and its decent battery life. It might not be a good looking laptop and does not have a 1080p display, but its utilitarian approach towards performance will make it an ideal choice for many. If you are one of those who prefer performance over design, this might be the laptop for you.