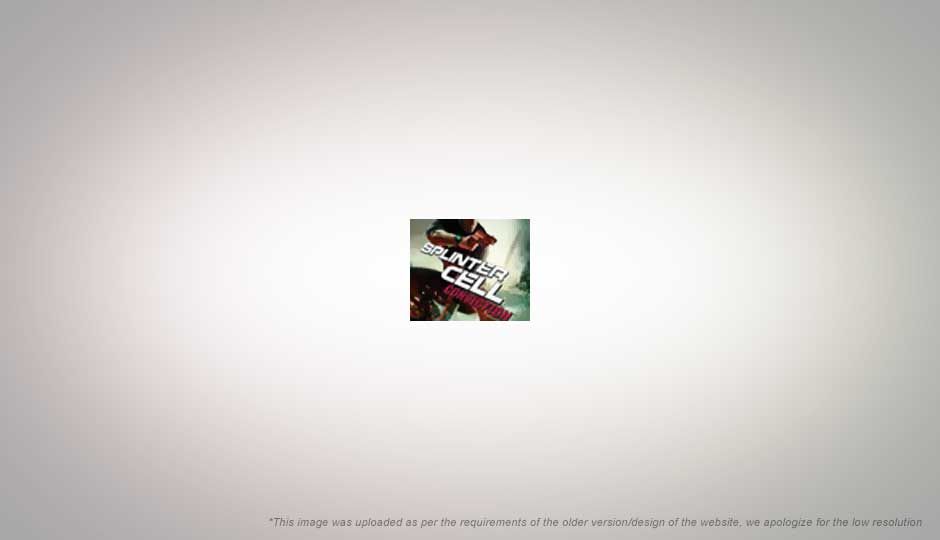 The hallmark of Splinter Cell games has always been mission that emphasized on quite and stealthy infiltrations; some of which required players to complete an entire mission without killing a single enemy. For me, patiently lingering in the shadows, watching and eavesdropping on oblivious guards was the real kick in those games. Compared to these past releases in the series, Splinter Cell: Conviction feels more like a cover-shooter than a spy game. Stealth is still an element in the game; however, it no longer rules the design of the game like it once had.

The most significant change in the series is in the art department. All other changes in the game’s design are apparently centred on this new art direction. Starting with the game’s protagonist, Sam Fisher has ditched his trademark night-vision goggles and tactical stealth armour, in favour of urban casual wear. And while there are well-lit and dark areas in equal measure, hiding in shadows has been stylized to meet the new art-style. In Conviction, lurking in shadows bathes the world into shades of gray and Fisher can see in the dark without the need for night-vision goggles. This is because enemies are almost always placed in well-lit areas. The way forward in the missions is mostly about leaving behind a sea of dead bodies. Stealth kills now includes effortlessly taking out enemies while hanging from a ledge or a window pane. 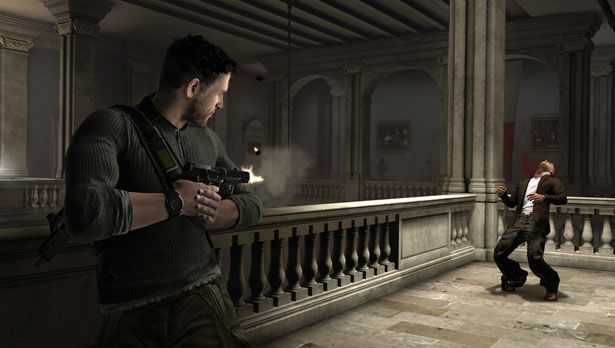 By far, the most game-changing addition to the list is the introduction of “Execute” move. Each time players take out an enemy in hand-to-hand combat, they get an opportunity for an Execute move. This move lets players mark enemies—up to four enemies at a time— while hiding in shadows. Then with a well-timed push of a button, Fisher automatically executes successful headshots on all the marked enemies. This is easier than it sounds and it can often be used to clear an entire room in a single move.

During set-pieces where stealth is not really the best choice, the player needs to work with another new feature in the game called “last known position”. While engaged in an out and out gunfight, it helps to intentionally reveal your position to the enemies. This causes all the enemies to concentrate their fire on that single spot, and using this as misdirection, the player can move away to flank the enemies and even the playing field a bit. 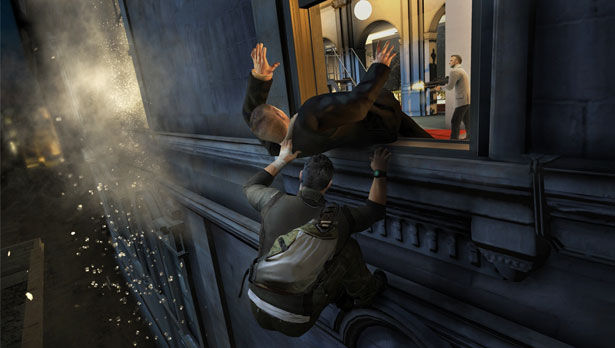 A nice bit about this new art direction is the way in which the game’s environment has been used to communicate with the player. Mission objectives and grainy videos of flashbacks are projected on the surrounding walls to dramatic effect.

Sam Fisher is a very different player in Splinter Cell: Conviction. He is a rogue agent on a quest for retribution for his daughter’s death and in doing so he is up against his former employer. So as you can imagine, he starts off rather ill-equipped, using stolen piece of a rear-view mirror to peek under doors. However, as the game progresses, Fisher has access to enthusiastically stocked weapon crates that are curiously placed at fixed checkpoints.

Weapons include customary weapon classes of most shooter games—there are pistols, SMG, Rifles and Shotguns. Selection of weapons in each class grows as the game progresses and all of them are upgradable. Achieving fixed game-play objectives and progressing through the main storyline awards the player with points that can used to upgrade weapons. 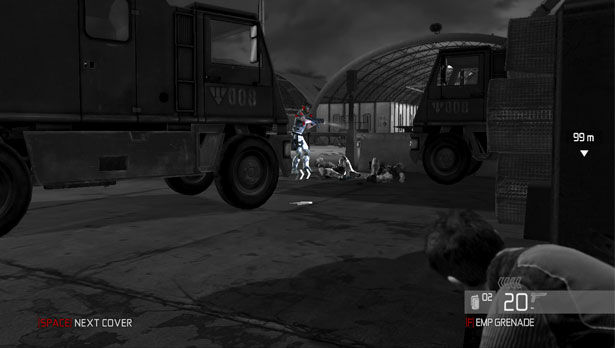 Just like weapons, the game also has a decent collection of gadgets that are fully upgradable. However, unlike previous Splinter Cell games, you will rarely feel the need to reach into the pockets and use a gadget. Conviction is a relatively fast-paced game with little room, or even the need for much planning or strategizing.

From humble beginnings of a broken mirror, the game progresses to something really exotic like goggles that can spot the enemies through solid objects. Besides the in-game un-lockable items, there are a few other items that you can download from the Ubisoft servers. Some of this DLC is free [confirmed only for PC] while others come with a price tag. So, between the on-disc items and downloadable content, there are more weapons and gadgets than one could possibly need.

Splinter Cell: Conviction has a fairly decent storyline which is delivered through often engaging voice-acting. The plot of Sam Fisher’s personal quest to track his daughter’s killers is intertwined with another plot which inevitably includes saving the world. I feel that new direction with game-play would have been better justified if the main storyline would not have essentially culminated into just another mission for the country. In its current form, Splinter Cell: Conviction appears to have abandoned its roots to be just another cash-cow in the herd. 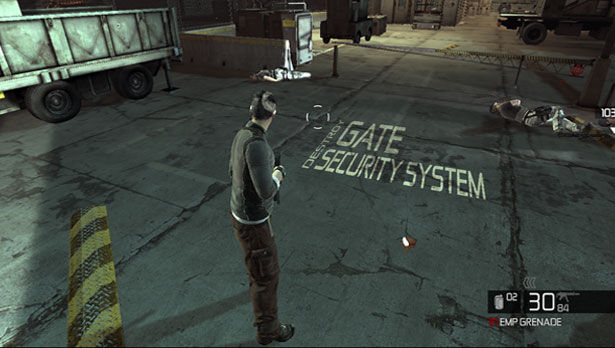 All the missions are relatively short, quick affairs and as a result the game feels a bit short at the end of it. The good news is that besides the main campaign, there is a decent amount of bonus content. In online co-op mode, players’ assume the role of Archer and Kestrel in a joint effort to recover stolen warheads. Hunter game mode is about progressively clearing the area of enemies, and Last Stand is about surviving waves of enemies, while simultaneously defending an EMP generator. Face-Off is a competitive game which pits one agent against the other along with common enemies thrown in the mix.

My online experience with the game was not one of the best. The DRM software for the PC version of the game appears to incessantly ping the Ubisoft servers even during ‘offline’ play. On a really bad day, it made the game virtually unplayable since every three or four seconds the game would lose connection with the servers and lock the game up. Now, I don’t have the quickest of connections to the Internet; however it’s not the dark-ages either. Besides this, in my experience, finding online matches was not always met with success and getting knocked back to the lobby was fairly common. 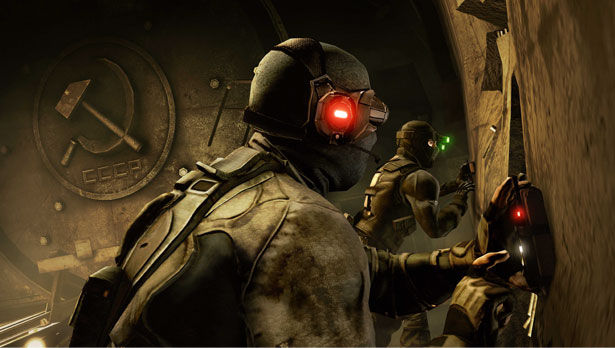 On the plus side, most of the additional game modes do not require another human player; so it’s not all bad. Then there is new DLC that is released regularly and so far the developers have promised new free content every week.

Splinter Cell: Conviction has its fair share of virtues and vices, and on the balance of things this is a fairly solid game from a neutral perspective. More significantly however, it is the shift of emphasis from stealth to action that is most likely to hurt the fans of series. For PC users, the new DRM that requires persistent connection with Ubi servers can be a potential deal-breaker. For those who really want to get this game, it’s a hard choice between paying more for the Xbox 360 version or getting the far cheaper PC version and risk having to endure the DRM.