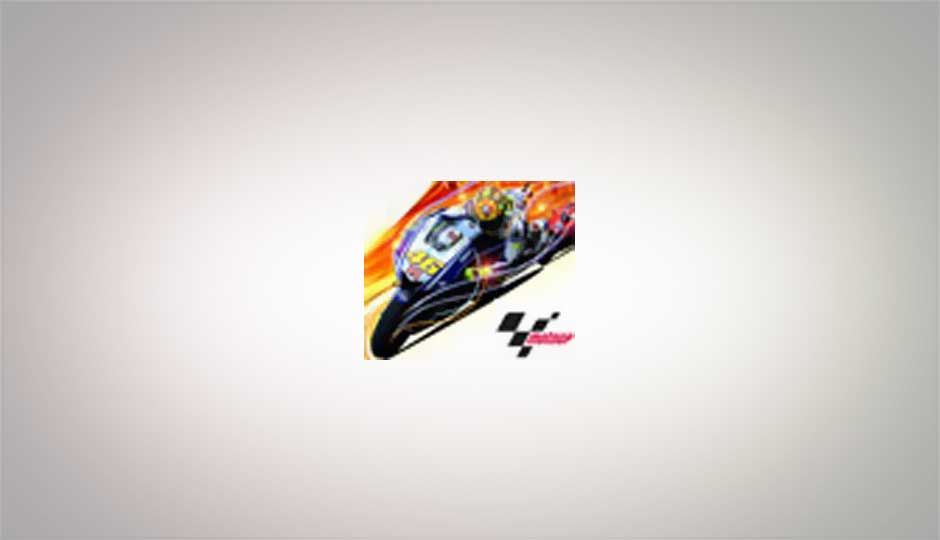 With its inconsistent difficulty levels, MotoGP 09/10 is not a title that can be considered friendly towards the casual gamer. This game requires sincere dedication and commitment on your part to master the dynamics of controlling various high-performance bikes.

The MotoGP game franchise has been licensed to Japanese developer Capcom since 2007, and it released its first instalment of the series on the PS2 console. Starting from 2008, the game was shifted to the latest-gen PS3 and Xbox 360 systems. Having skipped 2009, the latest episode has just been recently released, and is branded as MotoGP 09/10. The idea behind this move is that the game will feature the authentic and official lineup of 2009, and will add new content via the PS3's internet connection as the 2010 season progresses. For example, the first update that will be rolled out this month (July) will contain the 800cc class and associated teams, plus the new Silverstone (UK) track. A future update will introduce the 600cc and 125cc series.

In franchises like this, each instalment represents an incremental upgrade or introduction of new features as compared to its predecessor, mostly for the better. MotoGP is no exception to this. New to this “season” is a timed Arcade mode, in which you have to complete a race before time runs out, with seconds being added for good racing, and time being deducted for making mistakes or getting overtaken. Also added is a spanking-new Career mode, which is the highlight of this game. More on this later. 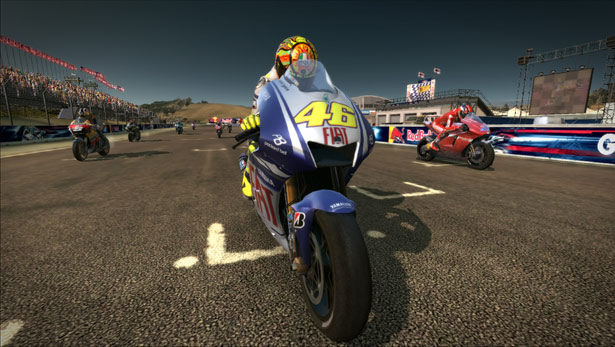 Before we go any further, let me say this right out. I'm not really a fan of racing simulators, because as anyone who's ridden a high-performance bike will testify, playing in front of the boob tube does not even remotely capture the visceral experience of having your guts wrenched back as the bike accelerates like a rocket. Then there are a few other mundane considerations, such as the control scheme. A console's controller is nowhere near as intuitive as a bike's handle, so whereas in the latter you can keep the throttle open for long hours with little discomfort, having to keep the accelerator pressed with one finger in the former leads to your hand starting to ache from the tension after less than an hour of playing. And don't even get me started on the gear shifting. The way I see it, racing simulators actually offer the worst of both worlds — none of the adrenaline-pumping experience of a real sports bike, and all of the inconvenience of the console's controls. It therefore makes sense that if you really do want to play a bike game on a console, it might as well be one that lets you perform outlandish stunts and physically impossible speeds, while letting you bonk competing riders and roving cops on the head with a baseball bat. I'm talking of course of the all-time classic, Road Rash.

Coming back to the present, judging from the limited popularity of simulators, I'm not the only one who feels that way. Therefore, any racing title tries to increase its potential audience by “easing up” on the player, giving him the option to tone down the realism and have a more forgiving race environment. MotoGP is no different in this regard. It pleases the hardcore fans by giving them an authentic official race experience, complete with real-world riders and race gear. More importantly, it lets you adjust every single aspect of your bike, right down to individual gear ratios. For the majority of us who couldn't be bothered with these things though, it has varying realism levels, starting from the lowest Gentle setting, which simplifies the learning curve. 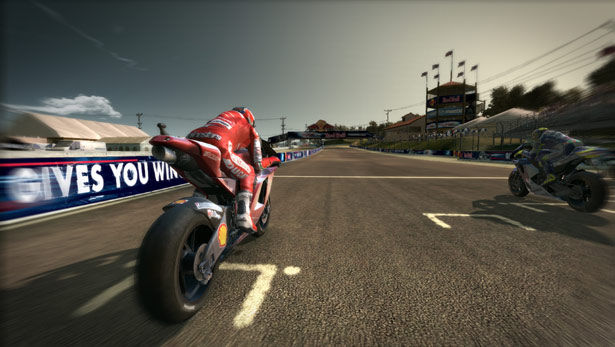 For the most part, MotoGP succeeds in this respect. The most obvious way is through the display of a dynamic “racing line” on the track. For those not in the know, the racing line is the optimal route that the rider has to takes across a bend so that the running speed of the bike is maximized. The better you stick to the racing line at the fastest possible speed, the bigger the edge you have over the competition. While in older games, the racing line would be represented by a simple white line across the track, recent games have made it “smarter”, one of the earlier examples being with Forza Motorsport 2 for the X360. MotoGP too has borrowed this concept. What you now have is a racing line that changes colour to act as a speed guide as well. Dark green indicates a “safe” or low speed, which gets lighter as your speed increases, with white indicating that you're at the fastest possible speed level. If the line is red, you're going too fast and unless you brake, will wind up overshooting the turn, sliding across the gravel, and breaking some bones. This feature is thus your friend, philosopher, and guide on the track (not necessarily in that order).

Coming to the game modes, the standard Championship mode lets you race a full season as one of the real-world riders and teams in the MotoGP. Sensibly, the higher 250cc and MotoGP bikes are restricted until you've first proven yourself in the lower 125cc class by finishing third or better. You'll see why this is such a good idea when how realize how much more difficult it is to handle the higher-performance beasts. Championship mode is the perfect way to get a good feel of the controls. The AI (Artificial Intelligence, or computer opponents) are at their most forgiving here, and it is not too difficult to overcome this obstacle. Things get a lot more challenging in the Arcade mode, which as mentioned earlier, throws in the added challenge of completing a track in a given time.

The toughest of the lot though has to be Career mode. Here, you begin as a rookie racer in the 125cc class, gradually working your way up the MotoGP ladder. Each race you play pays you money according to how high you finish. With this money, you can hire a publicist, who will scout for sponsors. These sponsors impose certain conditions, say finishing the race in 11th position or better. Achieving these objectives gives you a bonus payout. With this money, you hire engineers, who begin researching better technologies to make your bike run faster and handle better. Which area the research is conducted in (engine, brakes, suspension etc) is totally up to you. Another aspect is added through Reputation Points. The skills you display while riding (overtaking opponents, not overshooting turns, and so on) translate into points. Once you achieve a certain number of points, you move to the next “level”, which lets you hire an additional employee (PR or engineer) and take on an additional sponsor. Essentially, as long as you make enough money to pay your employees' salaries, you're in the game.

Read on to know more about the game's Career mode, and our verdict....

The problem with Career mode is in the sudden rise in difficulty levels. After a bit of practice, I comfortably won the 125cc Championship in the lowest difficulty level. Buoyed by this victory, I decide to plunge into a full-time race career. Boy, was I in for a shock. Suddenly I found myself all at sea, stuck with a bike that was far inferior to the competition. I needed to research upgrades to make the machine faster, but to do this, I had to win races first, which in itself became a near-impossible task. From winning a Championship by a 100-point margin, I now found myself routinely finishing eighth or lower, barely struggling to make ends meet. I did manage to end the 125cc season in fifth place, but it was depressingly clear that I had little resources left to survive the even more challenging 250cc season. Come on, this is the easiest difficulty level we're talking about! I'm supposed to be enjoying the game at this level, not crying out in frustration! Multiplayer mode was an equally disappointing experience. Normally, it's really difficult to go wrong with calling a few buddies over and playing console games with them over a beer or several. No such luck here though. The extreme difficulty of the Aracade-style race, again at the lowest difficulty level, meant that none of us could finish even a single race, each time having to listen to an annoying “Game over, yeah!” voiceover. Not cool.

I have little to say about the graphics and sound, mostly because there are few complaints on that front. The graphics quality, as with any title from a top developer like Capcom, is top-notch. I especially like the rain effects and the way drops of water splash on your helmet visor as you race under a grey sky. The music tracks are well matched to a game of this kind, having a good mix of Rock and Techno numbers that keep playing in your head long after the TV has been turned off. My only complaint: I would have preferred a few more tracks though; the quantity seemed to be a little on the lower side. 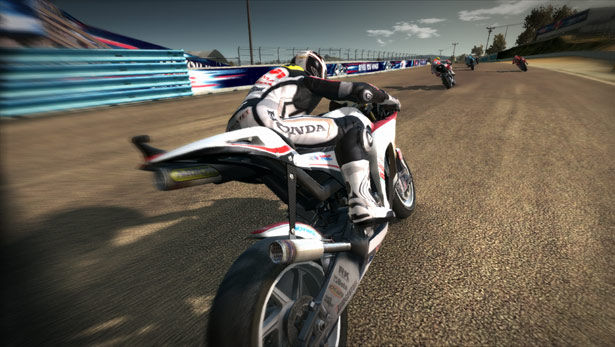 Overall, with its inconsistent difficulty levels, MotoGP 09/10 is not a title that can be considered friendly towards the casual gamer. This game requires sincere dedication and commitment on your part to master the dynamics of controlling various high-performance bikes. For hardcore simulator enthusiasts who love nothing more than tweaking the minutest settings to get that much more out of their rides, the game will provide a challenge that they will relish for quite some time to come.

What We Like: A great-looking game that has seen a lot of effort go into it, MotoGP provides enough goodies for the racing enthusiast, while also keeping the casual gamer occupied. The brand new Career mode is engaging enough to let you imagine yourself as a MotoGP team owner.

What We Dislike: The inconsistent difficulty levels will have you swearing in frustration at certain points. The gameplay experience is tilted far more towards the hardcore enthusiast than the casual player. 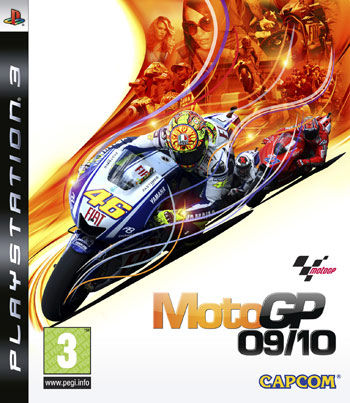