The UE Roll is a well-designed, clean, good-sounding speaker with good pricing. The bass response of the UE Roll is not the best, but apart from that, it performs impressively, and is waterproof, too. To sum up, the UE Roll sounds good, and makes for an affable speaker, at a price of Rs. 8,000.

Ultimate Ears is a rather popular brand, setting itself up well with the first version of UE Boom in India. Recently, the American audio company introduced the UE Roll in India - shaped like a pancake, waterproof and in vibrant colours. On an overall note, you will definitely love the UE Roll, with its vibrant bearing and compact dimensions. Adding to this is the promise of UE delivering with its initial offering of the UE Boom. We listened, saw and evaluated, and here’s what we found about the UE Roll.

Build and Design
The UE Roll takes its cues in terms of build and design from the UE Roll. The upper curve of the speaker has durable stitched fabric, with two, large, stitched markers denoting the two volume buttons. The material used feels smooth and durable, and lends continuity to the overall design of the speaker. The rear is entirely rubber, with one raised platform to hook the strap, and the other rubber flap concealing the microUSB and 3.5mm audio port to ensure waterproofing. Beside the flap are the two buttons - the dented power button with an LED indicator that blinks and stays steady once you connect to the Roll, and the second is a pimple button with a slight bump, used to set the speaker in pairing mode. 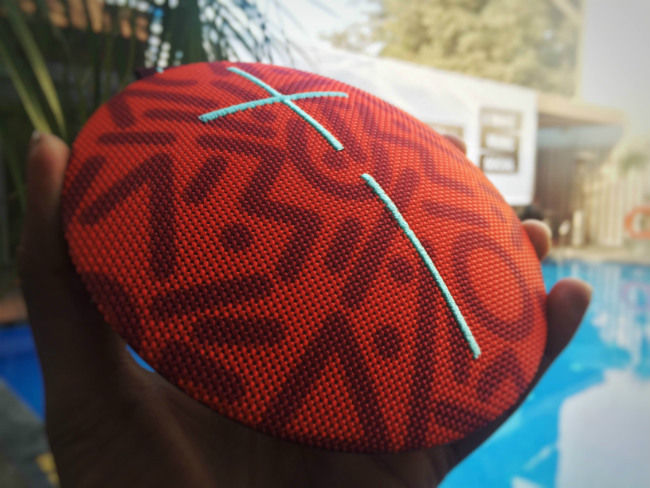 The overall setup is incredibly simple and well laid-out. In terms of durability, the UE Roll gives you confidence to hook it on to your belt or strap it to your wrist and go for a swim. The textured fabric on the top has a fine, refined finish, and we gladly did not see any loose threads or tarnished ends, even after a month of rough usage. The use of matte rubber on the back panel contributes to a number of benefits - continuity of design language, better grip and durability than plastic finishes. On top of that, the entire device weighs 330 grams, and is reasonably lightweight. The marine-grade bungee strap is sturdy and elastic, and is convenient to hook it on to backpacks. However, you would not want to strap it on to your wrist, seeing that the stiff elastic band may get incredibly tight.

What strikes here is the playful stance of the UE Roll - the company aims to place this speaker in the line of activity-oriented durable speakers, alongside adding vibrant colours to the face of it. While the UE Roll does not claim the extreme durability the way Altec Lansing states on its speakers, it feels strong enough to sustain a few bumps. The circular design of the speaker also helps it deliver audio at a wider angle, thus adding a wholesome tone to it. Overall, in terms of design and durability, the UE Roll has a unique facade along with IPX7-certified waterproofing, a light body and an overall appealing package.

Audio Performance
As we have always stated, it is the audio performance that makes a speaker great, even if it comes with myriad other features. The UE Roll comes with waterproofing and the ability to connect two of these to a single source, setting up its scope to become an excellent speaker. Right off the block, what will strike you is how clean and loud it sounds. The UE Roll has a primary 2” driver, supplemented by two ¾” tweeters. The max sound level of the speaker is 85dBA, making it amply loud. Its frequency range lies between 108Hz and 20kHz, and a rechargeable Li-ion battery is advertised to last for about 9 hours between full charge.

Beyond the sheets, the UE Roll’s loudness has a sense of warmth to it, that you generally associate with more expensive speakers. There is excellent clarity in its audio delivery, even near the highest volume. As a result, while clean patches on guitar retain the distinct rawness in the sound, the crunch patches are relayed with a pleasant sense of warmth. Distortion patches sound heavy and clear, combining with the high pitch of vocals to lend ample clarity to the mid frequencies. The highs are sharp, compact, and have excellent timbre. The amplitude is limited, hence not making the audio overtly shrill.

Coming to the bass frequencies, however, the bass amplitude of the output audio from UE Roll is also limited, leading to slightly restricted bass levels. As a result, even though the bassline does form a steady backline, there is a slight, uncharacteristic lack of clarity in the low frequencies. At the same time, higher bass notes tend to hover for a split second longer than the source, contributing to the muddle in bass notes. Having said this, the low frequencies are in no way muted, and are amply loud. Added to the excellent clarity of the mid- and high frequencies, the slight lack of clarity in the bass is overpowered in most tracks, particularly tracks with elaborate instrumental layers, leading to pleasant, overall audio quality.

Getting back to the clarity part, the UE Roll is one of the best in its price bracket for what it delivers. There is not a single hint of out-of-place distortions, apart from at the very bottom of the audible frequencies. For instance, in Pink Floyd’s The Great Gig in the Sky, Clare Torry’s vocals do not overpower the dulcet notes by Rick Wright, leading to a wonderful, warm balance in the song. The only aspect that somewhat affects is the muddled-yet-loud bassline, which disturbs the otherwise-excellent-sounding track’s precarious balance. While it is not loud enough to be directly labelled as one for the bass-heads (they wouldn’t mind this, though), it certainly takes a bit away from the audio timbre. 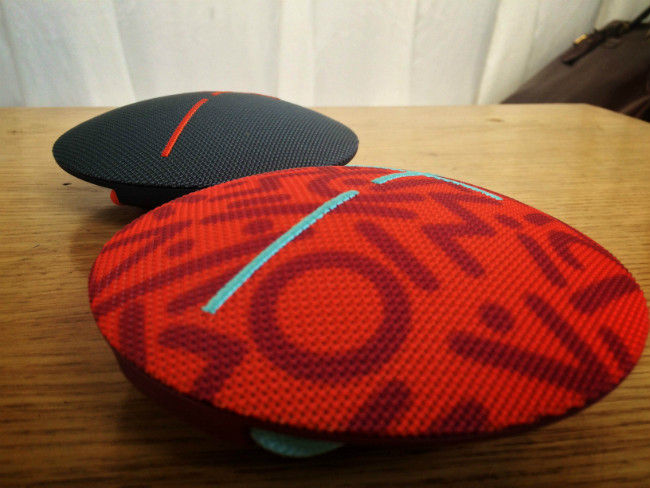 Talking about heavily bass-ridden tracks like Rise by Flobots, the added power of the low frequencies is certainly enjoyable, and for a track that has a rustic aura about it, the UE Roll does well to replicate the same. ‘Cleaner’ bass-ridden tracks like 2112: Overture by Rush are the ones that actually get affected by the lack of clarity and the slight bias in bass frequencies, taking a little bit off the shine of the UE Roll.

Personally, I prefer the warmth in songs, with slightly muted highs so that the shrill amplitudes are cut off. As a result, I like slightly added bass, which gives tracks firmer backbone. This becomes particularly evident if you listen to a lot of The Red Hot Chili Peppers at the peak of their funk. Listening to Flea playing Californication live at Slane Castle is where the added bass may agree with your taste in audio, seeing how majorly bass-driven the track is. However, at the same time, the fondness for the UE Roll slightly drops once you switch to Joe Satriani playing Flying in a Blue Dream live at G3 Tokyo - for a track that is all about Satch and his seven strings, the UE Roll gives too much importance to the supporting bass guitar, somewhat muting the exhilaration of the track.

Having said all of this, it needs to be stated that the UE Roll still delivers one of the best audio quality in terms of clarity, balance and warmth, for a price of within Rs. 8,000. Coming to the other aspects of its performance, the UE Roll can remain connected to your device from a distance of nearly 40-45 feet, in a clear environment. However, in areas with more obstacles, the range can drop down to about 30 feet, which is still a good feat. While the UE Roll can survive under 1 metre of water (or any other liquid, if you please) for 30 minutes, it gets disconnected from source at a distance of about 10-12 feet. It misses out on a speakerphone, about which I am divided on thought. While the fact remains that the likes of Altec Lansing Mini Lifejacket 2 and JBL Flip 3 have speakerphones and that aids receiving a call if you’re right beside the pool (all of these are waterproof), I have also succeeded at embarrassing myself by inadvertently receiving calls on speakerphone in the middle of my friends. In terms of a feature, it is amiss on the UE Roll. Whether it truly affects or not is something that I’ll leave for you to decide.

The UE Roll can only connect via Bluetooth or aux, and the presence of WiFi or NFC, albeit a luxury at this price point, is vividly absent. There aren’t too many buttons to fiddle around with, keeping the UE Roll clean, simple and uncluttered.

Battery Life
At full charge, the UE Roll lasts for a total duration of a little more than 8 hours. With 30% charge remaining, I managed to make the UE Roll last for nearly 2 hours and 30 minutes. Once you’re out of charge, though, the UE Roll takes nearly 3 hours to charge back up to 100%. While there is no LED indicator to tell you the amount of battery remaining, pressing the two volume buttons simultaneously will see a voice state the amount of charge left on your speaker. It is not the best in class, but is enough to see you through an outing.

Bottomline
The UE Roll is a well-designed, clean, good-sounding speaker with good pricing. The bass response of the UE Roll is not the best, but apart from that, it performs impressively, and is waterproof, too. To sum up, the UE Roll sounds good, and makes for an affable speaker, at a price of Rs. 8,000.